I already covered anime gatekeeping some years back, so I didn’t bother to talk about it again during the Twitter controversy.

Everything I said is being mirrored by everyone else, 2+ years later. Except Twitter is designed for outrage when you say it on the platform.

And except for those who are against gatekeeping like Comic Book, Mary Sue, and so on.

But surprisingly the conversation just keeps on going, and people won’t shut up about it. 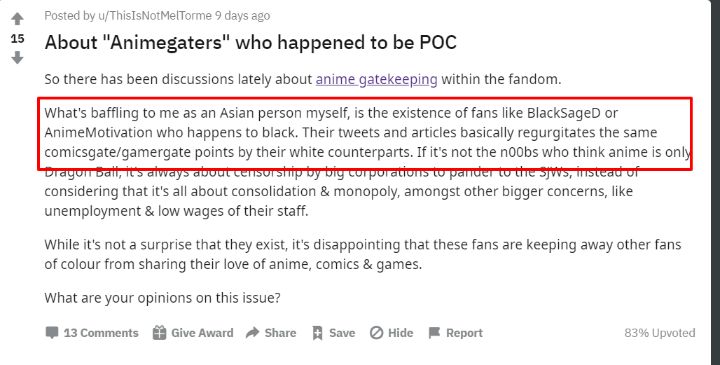 “What’s baffling to me as an Asian person myself, is the existence of fans like BlackSageD or AnimeMotivation who happens to black. Their tweets and articles basically regurgitates the same comicsgate/gamergate points by their white counterparts.”

I was even thrown into the mix on Reddit.

One person thought it was strange that black fans were trying to “gatekeep” the community.

A set of images by one Twitter account caught my interest, so I wanna talk about it.

I used their image as the headline.

Gatekeeping to kick the SJW’S out of the community 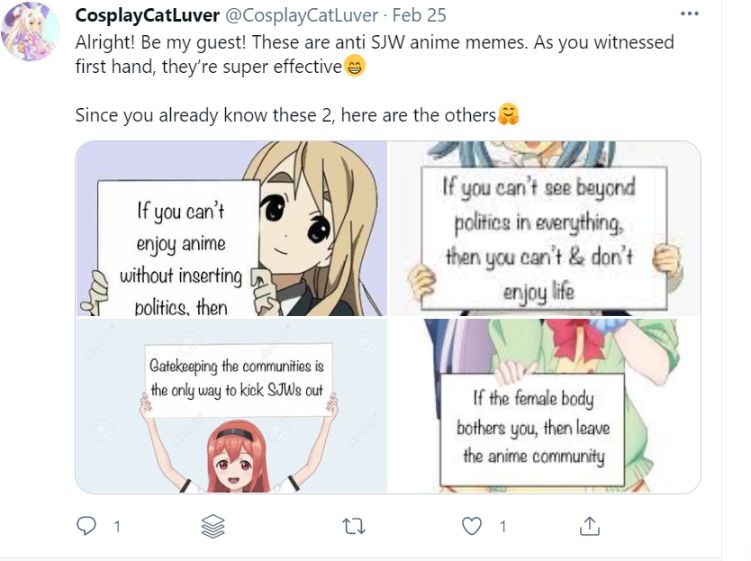 Someone who’s against SJW’S, as are many, has made a set of relevant memes relating to their behavior.

How this all started is thanks to a Tweet criticizing that got a lot of attention. 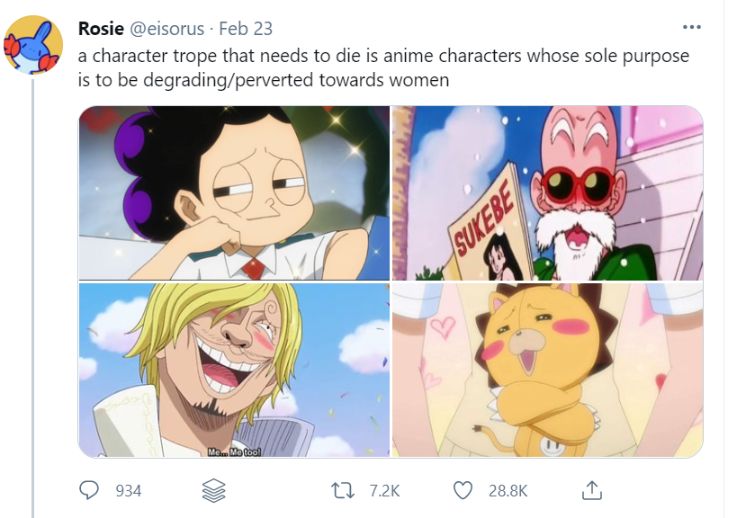 “a character trope that needs to die is characters whose sole purpose is to be degrading/perverted towards women.”

The anime community ain’t new to this. It’s common as f*ck to see these complaints on Twitter.

Almost 100% of the time the people making the complaints are Americans.

No one else from other countries seems outraged. “If all you do is complain for the sake of virtue signaling & woke points, then leave the community.”

And it’s these points I wanna talk about because there’s a few.

Sadly Twitter is full of people virtue signaling and trying to gain points by being woke, so it’s no word of a lie.

Might not be everyone, but there’s a lot and they’re always trying to force their ideals onto . A thing they have no real control over.

Why the gatekeeping argument is still going: 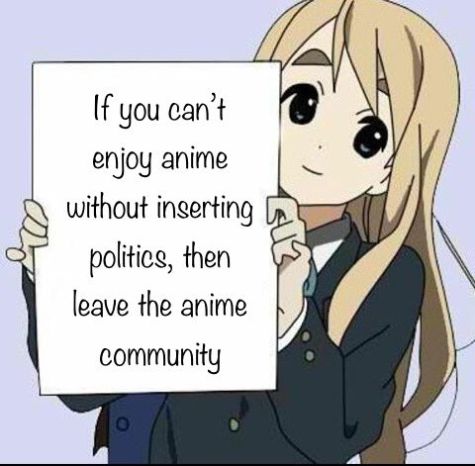 “If you can’t enjoy without inserting politics, then leave the community.”

This is again, another thing I’ve already talked about before it became “cool”.

It doesn’t matter whether you wanna mention the drama in 2020, and the so called “Hitler” nonsense Twitter was outraging about.

Or you wanna talk about voice actresses like Jamie Barky, who openly admits to inserting “politics” into dubbed shows.

Since Twitter is mostly Americans on the platform, a loud minority of them flood it and make things political where it’s not. Especially when an doesn’t sit well with their tastes.

Or they play mental gymnastics to claim things that aren’t legitimate.

This is a reason fans wanna #gatekeep .

2. Being offended by fan service

“If the female body bothers you, then leave the community.”

The argument for this is you have a right to criticize if you’re an actual fan.

That’s fair and obvious. I’ve criticized Demon Slayer before. And a ton of other shows.

The difference is I’m not trying to force Japan to “change” their ways, their designs, their fan service, or any element I don’t like.

I let people enjoy what they need to enjoy, kick back, and like what I like without being colonialist.

The fan service outrage is usually when it comes to female bodies. And never the opposite.

There happens to be more fan service with girls (male audience) and that’s why the criticism is heavy.

But… It’s still a double standard from the people who outrage about it.

3. Forcing your ideals onto Japanese creators “There are 2 was to solve your problem.

#2 – Leave the community all together.”

This is in response to people who outrage on Twitter, or worse: attack Japanese creators in groups.

Usually leading to creators making a statement, or even taking a break from Twitter all together.

If an is not for you, turn it off and move on. Or leave the community.

That’s the point being made here. It doesn’t apply to genuine criticism in general.

I’m all for gatekeeping in this context

The elitist type of gatekeeping is something I’m NOT for. That’s nothing but ego and insecurity pretending to feel important or superior.

But there is a genuine set of negative people, and even companies, who’d love to take from Japan and erase their culture to push their politics and narratives into it.

Look at what happened to Hip Hop to a degree. Bad intentions and culture vultures spun a narrative.

I suppose that’s why anime cancel culture is always so extreme (tries to be) when it comes to and how the west reacts.

How To Spot Fake Anime Fans And Why They Exist

The Problem With Anime Feminists In The West