gatekeeping is no different to gatekeeping in any other industry. It all starts with one greedy person who wants to hoard, manipulate, and abuse an industry for selfish reasons.

When I started getting into the industry I reached out to 1000’s of accounts, sites, blogs, vlogs, and more.

Most ignored or saw me as “competition”. Including people who went out their way to build themselves up at the expense of trying to put me down or exclude me.

This is a form of gatekeeping WITHIN the community

A lot of these so-called influencers aren’t your friend.

Same with the big sites. Unless you kiss their batty and bend over backwards when they tell you to.

The other form of gatekeeping in the community is criticizing fans who like that aren’t “popular”.

Sword Art Online is a perfect example of this. The amount of media outlets, vlogs, and blogs who jump on the hate train for clicks and likes is sickening.

It’s their way of saying “if you like you shouldn’t be in the community”, which is proven by how you’re treated for being a fan of it.

These same people who by the way, claim they love and support the community (when convenient to their agenda).

gatekeeping as it stands, is built on arrogance

It’s all about who’s better than who, and excluding anyone who doesn’t fit your idea of “the ideal fan” to stroke your own ego.

That’s not what gatekeeping is supposed to be. Or at least that’s not a practical way of doing it. 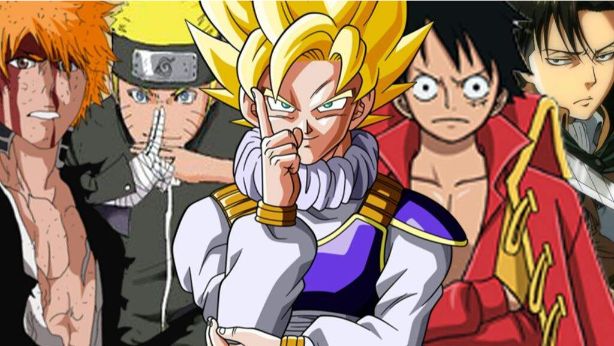 I’ll be the first to say I’m not the biggest raver when it comes to mainstream anime. That’s because I don’t like to get caught up in hype.

But I’m baffled at the amount of fans I see saying “you’re not a real fan if you watch mainstream content”.

All forms of extreme gatekeeping is nothing but projected insecurity. You exclude others to big yourself up and make yourself “feel better” about your choices.

Trying to put others down for having different tastes makes you a loser behind closed doors. 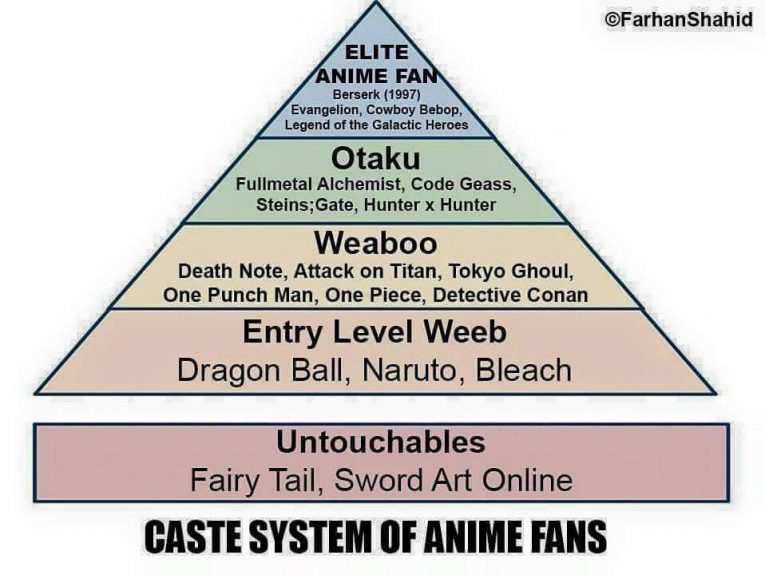 As this image says – it’s a “caste” system for so-called real vs basic fans on an imaginary hierarchy.

This list by a person who’s no doubt projecting his insecurities, is what’s wrong with the toxic anime community.

People are so spiteful these days they’ll go out of their way to make you feel small, to justify a “void” in their lives.

3. “You can’t cosplay as THIS character because of your race”

The image above is taken from a black girl who cosplayed as Nezuko ().

This was her first time doing cosplay, and she was understandably nervous because of reasons I’ll get into.

Ironically it didn’t take long for her post to gain traction, or for the “ cosplay police” to tell her what she can and can’t do…

These types of gatekeepers in the community, ironically, are Americans who aren’t even Japanese. And yet are “gatekeeping” anyone who doesn’t look like them based on false notions.

Though it’s not like Americans only target the black community, either… On the other side is another extreme: fans saying “only Asians can cosplay”. And going as far as starting an “Anti western movement” with a website dedicated to it.

This type of gatekeeping is mad and I’d like to believe it’s not common, but it kinda is.

4. Excluding NEW fans to stroke your own ego 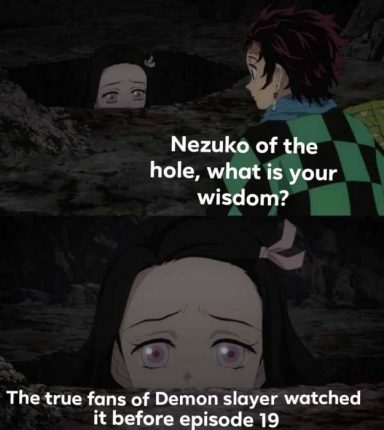 This “meme” says anyone who started watching after episode 19 aired isn’t a REAL fan.

The funny thing is what they’re actually saying is new fans who now like aren’t “qualified”.

This logic is the reason why NEW fans don’t wanna be part of the community. Why would they?

No one wants to be a part of someone if it means jumping through imaginary hoops because of some false notion of gatekeeping.

Related: 7 Of The Biggest Reasons People Don’t Like Anime (Or Give It A Chance)

This is another version of FAKE gatekeeping you see in the community. And again – this is mostly by people who aren’t native Japanese.

It’s either Americans, or westerners for the most part more than anyone else.

They wanna criticize and exclude anyone (new fans included) for liking dubs even though it doesn’t affect them directly. Instead of shutting the f*ck up and letting dub watchers enjoy what they want.

And the fact this meme was created in 2019 only shows the amount of insecure people trying to gatekeep are alive and well.

This is again, why a lot of people avoid the community because of all this b*tching and bickering over nonsense.

6. “If you like X Y Z you should be ashamed of yourself”

And then there’s the “gatekeepers” who go on to say you’re a piece of sh*t for liking certain . Or that you’re not a true fan.

Or in this case:

“If you liked you should be ashamed of yourself. If you like Boruto then you need to stop calling yourself an fan altogether.”

I do wonder why so many people are offended by your choice of .

Gives me a good chuckle.

Article: “It’s very dispiriting, when I see tweets from men who accuse us of watching to impress them or that we’re fake fans.”

I’ll admit I’ve only been privy to this kind of behaviour, lately.

It seems there’s a small group of fans who criticize female fans for not being as serious or genuine.

Sometimes – they’ll even go as far as saying female fans are “only” fans because they’re trying to impress Men.

It’s amazing how this level of stupidity can even exist, but it’s a form of gatekeeping that makes me shake my head.

At least it’s not mainstream though. Just a couple of clowns without makeup.

A better way to handle Gatekeeping In the community:

1. When dealing with culture vultures

A culture vulture is someone who slides into an industry, profits off it, spreads propaganda and doesn’t give a F about the culture.

We’ve started to get a ton of culture vultures in the community in the last couple of years.

A lot of them are on Twitter, and certain websites who all of a sudden write about .

Now your “favorite celebrity” likes and you culture vultures want to ride the wave like you f*ck with or when you was hating on me for liking that sh*t. These fraudulent f*cks here…. https://t.co/PXQMj1W04W

There are so many of these people masquerading on the internet as “ experts” or people who love . But they only jumped on the bandwagon because it’s getting popular.

Their motive is to try changing from the inside out with their so-called “WOKE” ideals and progressive bullsh*t. And force western ideals on Japanese media and society.

Anything they claim is sexist, misogynist, or whatever other buzzword is where they put their energy.

Related: The Problem With Anime Feminists In The West (And The Hidden Agenda) 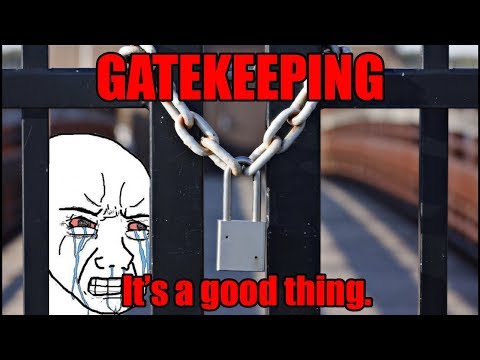 At the end of the day, it’s these people who are trying to ruin and harm the community for everyone who just wants to enjoy it and be left alone.

If there’s a problem, the community can deal with it. We don’t need extremists to step in and preach about what should and shouldn’t be done.

Culture vultures are attempting to do this in all kinds of industries, not just . And it’s something that should be called out.

That’s the type of gatekeeping that makes sense because it’s practical and serves a real purpose.

Culture vultures are the worst. They are fandom wreckers that definitely need to gatekept. They are never interested in quality or art itself , they are only interested in pushing propaganda. I’ve heard even wrestling is being ruined by them.

No surprise. They’re scrotes with no morals or ethics.

Culture vulture is the worst and also number 2.
I am sick seeing people with higher pyramid ranking always attack below them just because difference on taste. in the first place why they keep coming to forum that they hate just for mocking people who like it, are they that autism that seek attention or just have too much free time?

I find gatekeeping to be bad no matter what, personally I’d just let the medium be open and help address the true societal issues like the algorithms on social media predicting our behavior and manipulating us.

neko in my basement

Yes, because being progressive is bad and propaganda. Staying stagnant in views is good. Genders roles and patriarchy is part of Japanese culture and should stay that way, because they are another culture and should be understood. Boohoo. Lolis are fine because they are at least 1000 years old! Even if they have immature mentalities and childish bodies it’s fine, because they are not underage. Enjoying cp is fine because you can enjoy whatever you like and if you say so otherwise you are a WOKE, HATE-FILLED SJW OPPORTUNIST and don’t deserve to be a weeb.

When did you publish this

Wow. I really liked what you said. This is the first time I read an entire article so you can tell how much I appreciated this.