Redo Of Healer is the “Ishuzoku Reviewers” of 2021, except even more controversial and f*cked up.

It’s about revenge at the end of the day. And the suffering the main character is put through, is why he goes to extreme lengths to make an example out of the culprits who broke him, mentally and emotionally.

There’s no telling what the average person (other than suicide) would do in his situation.

Trust me, I get it. More than you even know, considering situations I’ve seen in life.

That being said, the gender double standards when it comes to r*pe in Redo Of Healer…. And the deflection coming from some fans is astonishing.

Enough for me to talk about it since it’s so popular that people can’t shut up about the anime. 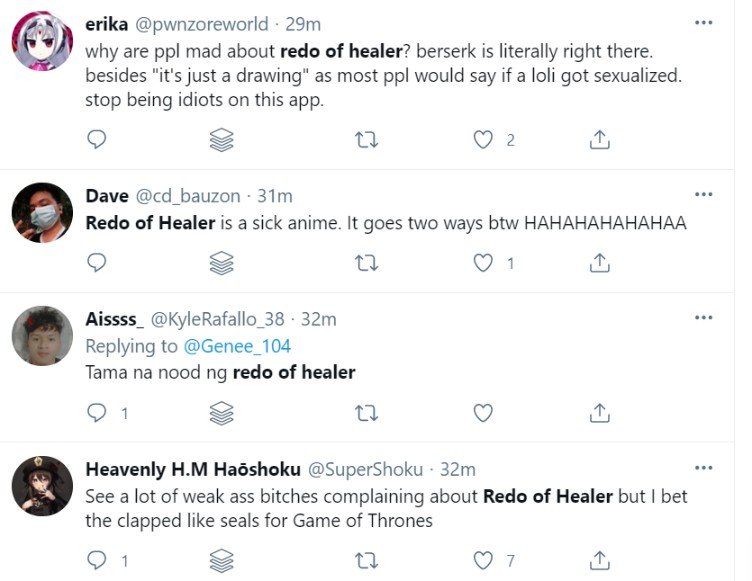 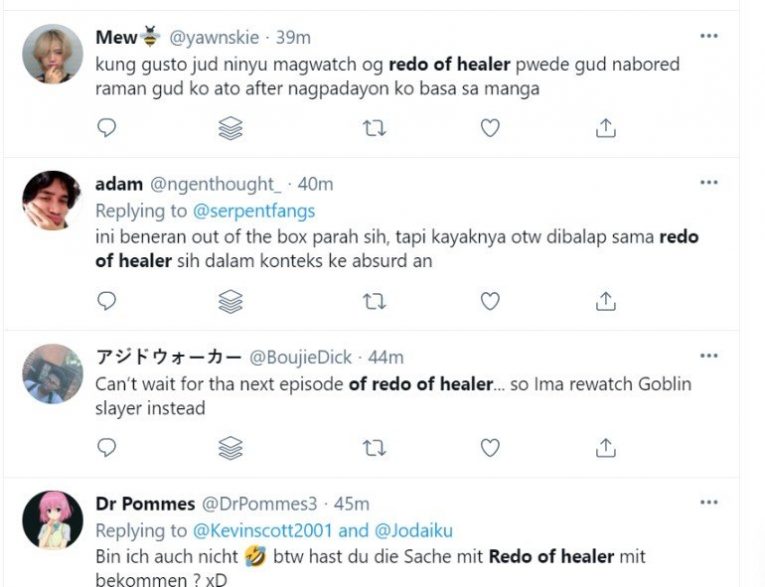 Every day and every hour there’s tweets flooding in about Redo Of Healer, and on some sites the view count has surpassed some known anime like Re:Zero.

But only the most daring are willing to talk about this anime at length.

I’ll start with relevant characters in Redo Of Healer 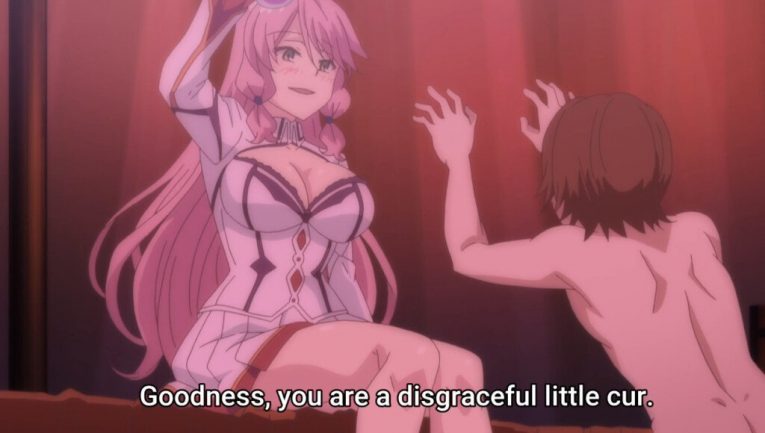 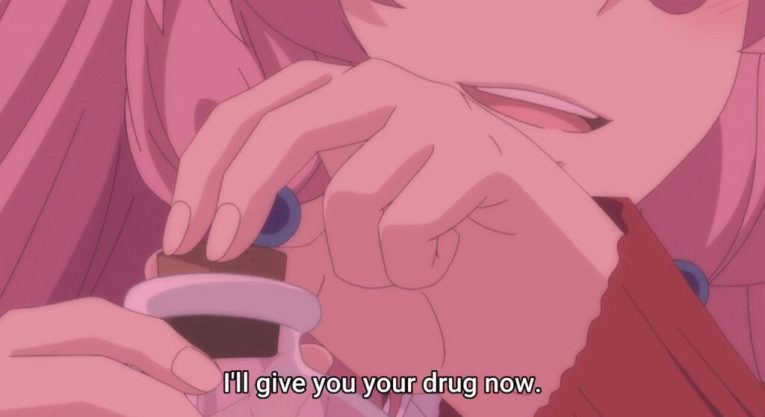 Flare, even though all hasn’t been revealed yet, is responsible for some of the worst sh*t imaginable.

Being drugged against your own will, raped by both men AND women, abuse… Turned into a slave. And made high out of your mind.

These are the things that took place in Keyaru’s previous timeline.

He was driven out of his mind, literally by Flare. And other male and female characters. 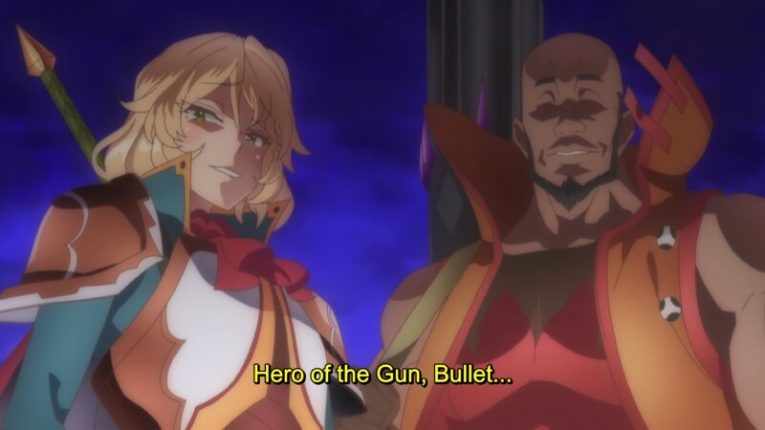 Some of those characters are Blade and Bullet. Two characters who are part of Flare’s “legion”.

They’re bottom of the barrel as American’s would say, as far as their morals and ethics. Birds of feather really do flock together.

Keyaru learns that the hard way.

It’s surprising he didn’t kill himself. But that’s how vengeance works. It’s so strong, suicide wouldn’t even be an option.

Related: Redo of Healer Characters, And The Role They Play In The Anime

This is the double standards I’m talking about

Redo Of Healer is part trashy, vile, twisted, and uncomfortable. No doubt about it.

But… so much focus is being put on the protagonist as opposed to the culprits and the true source of this sick story.

The anime highlights false rape claims which women can so easily make against men, and how men can be treated as “guilty until proven innocent”.

No energy was given to Myne, the vile female character who incited it, but the male protagonist was criticized without hesitation.

Extremist feminists and everyone else started deflecting and downplaying the reality Shield Hero exposed. Or at least a window of the reality.

Some even went as far as saying “that type of thing doesn’t exist”. 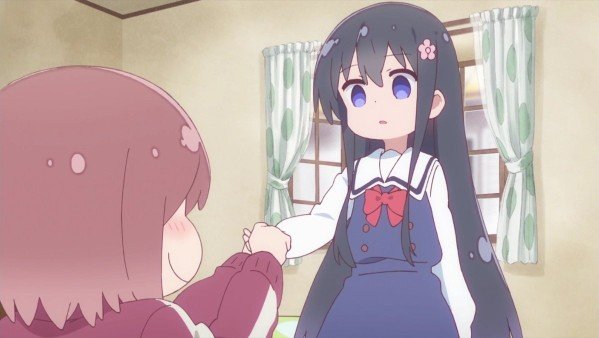 The same thing is happening with Redo Of Healer, but to a more extreme degree. Especially because it’s a touchy, controversial anime series.

Some of the same people criticizing it are those who had no problem with “An Angel Who Flew Down On Me” An anime rated over 7/10 on MAL, which is about a female pedo protagonist.

People seem to pick and choose what they can stomach and what goes too far, as long as they aren’t the ones offended. While happily pointing the finger and screaming on Twitter.

Related: This Is Why Anime Will Never Be Politically Correct

This is more obvious by the MAL reviewers leaving bad ratings in drones. Ratings that are more about double standards than objective qualities relating to the anime (which is what a review is supposed to be).

A lot of these ratings have no reviews either. Showing how MAL reviews can be rigged, therefore unreliable as I’ve mentioned in the past.

After all, you don’t even have to watch an anime series to give it a bad rating.

Redo Of Healer is far from finished, and I’m sure I’ll have more to say if it gets even more insane than it has.

I’m more watching it from a creative stand point, to see where and how this all plays out. Because it’s amazing how an anime like this exists, and how unrestricted anime is (which is how art should be).

What do you think of Redo Of Healer? Or the double standards?

Is there a good argument for it?

Start Playing Now Learn More
We earn a commission from Amazon & other affiliates if you make a purchase at no additional cost to you.