If you’ve stepped into the community for 5 minutes, you’ll notice one thing. And that’s the hate for profile pictures.

More so on social media, forums, or even Google itself.

I started noticing it when I seen so many Quora questions about it.

It’s mental ain’t it? The hate is real.

It’s the same thing in most places you look online. 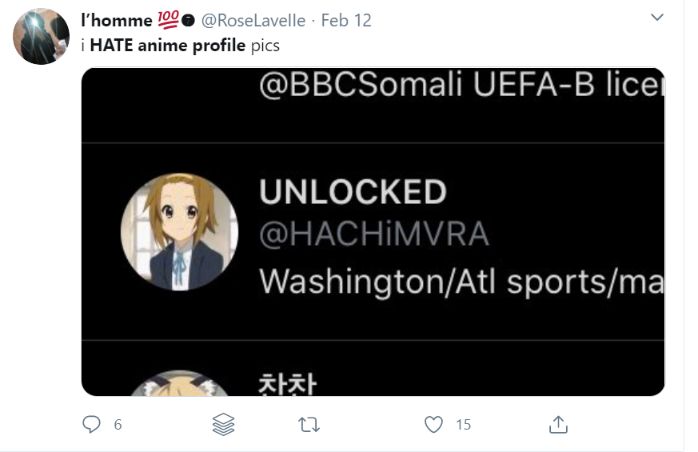 It’s almost as if it’s a universal hatred for in particular. Even when ‘s not part of the conversation, someone will manage to throw some hate towards people with anime profile pictures.

So why the hate for profile pictures?

The hate comes down to a lot of things. Some of it is public knowledge.

But it doesn’t always have any rhyme or reason to it.

“Recently I have played CS:GO in competitive and every game I join there is at least one person who calls me and my friends who have profile pictures weaboos. And posts really rude comments on profiles, I think it is really inappropriate and not fun.

Why are people on the internet so negative towards and people who like it?”

Prejudice is when you have a preconceived notion about someone or something.

In the case of – it’s as if people have it ingrained in their DNA to hate people who like , or have profile pictures of them.

“Is for loser and weirdo?” 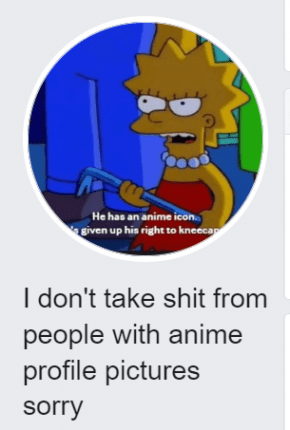 In these cases like I hinted before – they’re all projecting and there’s no logic or purpose to it. Other than to hate and feel better about themselves I suppose.

“I hate profile pictures, almost all of the time they are the biggest d*ckheads ever.”

On the surface this seems like ranting. But there’s a reason to this one.

The person in question didn’t like the way they were treated by someone with an profile pic.

And so they associate this experience with people who have profile pics (stereotyping). 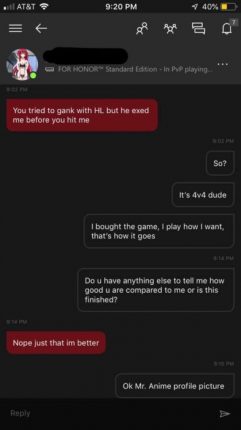 The interesting thing is how “anime profile picture” is thrown into the conversation.

But in the end – a few bad apples causes people to irrationally judge you. or otherwise.

Relevant: Why The Coronavirus Has Made Anime More Popular Than Ever

3. Not knowing who’s behind the profile picture

“I guess for me it’s often a sign that they are far from what the icon represents. I’m not a fan of not knowing who someone is, and I’m even less of a fan of having my impressions shattered.”

This is something I’ve said before. A lot of people are judgemental, especially when they’re insecure.

If you have an profile picture you give haters less ways to judge you.

The person on Reddit who mentioned this isn’t a hater, but that’s usually the reasoning when someone is.

“Anyone using an profile pic is not doing so because of appreciation. They’re sending a message, intentional or not.

That message is “I am hiding my appearance. My appearance is a deal-breaker, and I am well-aware of it. Rather than put forth any effort to improve myself, I choose to represent myself instead with animated characters indistinguishable from each other, and renowned for being associated with fans with unpleasant, awkward, and antisocial behavior.”

The hate for is very real. And strangely this doesn’t apply to any other medium other than .

And it somehow doesn’t apply to people who are already anonymous when making these claims.

“Did someone hack your account Elon? You seem to have an profile picture now. RU OK????? XD.”

Back when Elon Musk changed his profile picture to Edward Elric in 2019, hypocritical comments popped up everywhere.

All of a sudden it’s “confusing” and “doesn’t make sense” because the person they admire destroyed their preconceptions. And they don’t know how to respond.

The benefit of the doubt was given based on what they conjured up in their own minds. But never when the person in question isn’t famous.

The long and short of it is: this guy spoke to a girl on Facebook with an profile pic.

He thought she was:

And that lovey dovey talk we all go through when we’re into someone.

Turns out when he met this girl he was disappointed from a beauty point of view.

And so – he’s blaming , saying “this is why I hate profile pictures on Facebook.”

The reality is people with REAL pictures don’t turn out to be what you thought as well. I’ve met enough girls to know it.

Anime is just an excuse to justify your disappointment. Let’s call bullsh*t when we see it.

That’s simple. I’m willing to speak for people who don’t have a voice and are on the receiving end of the abuse or hate.

And no one else is speaking on it, so I’ll gladly be the one to do it.

Yes – there are a portion of people who hide behind profile pictures. The types who are pricks, c*nts and make an absolute mockery of themselves.

And yes – there are even people (culture vultures) who use profile pictures to push false narratives and agenda’s in the community.

But that’s never the majority, and it shouldn’t be treated like that.

Especially not because you’ve dealt with 20 out of millions of people, and are now judging millions based on those 20.

Let’s do better than that.