I’ve watched the Patreon madness for a while now. But it’s time to get into the nitty-gritty.

It’s reached a peak where I feel there’s enough info to dive into and explore. So let’s do that.

What the f*ck is this sh*t??? #anime is basically all under age now #patreon? Do you not think for one moment that this is totally lacking any common business sense? If you don’t want to do business with independent creators, just come out and say it. pic.twitter.com/6af7MjfNFq

The “rumor” started before this official Tweet came about. I knew about it beforehand but decided not to get into it.

But some days before this Tweet – a Patreon artist made an announcement.

Some of it says (edited for clarification):

“All Japanese styles can be said to be out. As long as you do Japanese style, even if the character has big breasts, Patreons official said it’ll be classed as a minor, so I had to delete 90% of my art on Patreon.”

What this means is:

The interesting thing is Patreon said “restrictions on minors” for Japanese style drawings.

Does this mean they’re ONLY targeting drawings, where as WESTERN drawings of minors is OK?

I’ll leave you to think about that.

The patreon artist then said (edited for clarification):

“If your Twitter, Pixiv (or website) has Japanese style drawings that looks underage, Patreon will ban you from linking out to the website. And you won’t be allowed to link back to your Patreon FROM the suspected website.”

In other words – Patreon won’t ALLOW you to link to your account, or from your account if your anime drawings don’t fit their worldview. Regardless of whether they’re reasons for banning you is right or wrong.

Related: Should Anime Be Considered Art?

We’d like to clarify a recent rumor about our guidelines. We do not limit any specific style (like ) of art. But our guidelines do not allow sexualized depictions of minors. If you have questions or want clarification, you can always reach our team at [email protected]

“Our guidelines do not allow sexualized depictions of minors.”

This quote is the most important part of Patreon’s response.

On the surface it makes sense and there’d be no reason to argue with it. But there’s more to it.

Patreon’s been hiding the “true” nature of their intentions, as proven by receipts from artists on their platform.

That’s not what you said to your Japanese users. pic.twitter.com/yjZK2czuBZ 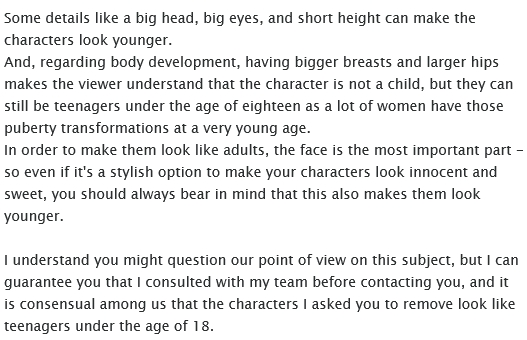 Patreon said THIS to their Japanese users who draw “Japanese style” characters:

“Some details like a big head, big eyes, and short height can make the characters look younger. And regarding body development, having bigger breasts and larger hips makes the viewer understand that the character is not a child, but they can still be teenagers under the age of 18 as a lot of women have those puberty transformations at a very young age.

In order to make them look like adults, the face is the most important part – so even if it’s a stylish option to make your characters look innocent and sweet, you should always bear in mind that this also makes them look younger.”

Let’s break this down:

What does Patreon REALLY mean by this?

There’s a lot of ways to interpret this.

1. If your drawings aren’t westernized, we have a problem with that

Patreon is banning all Japanese style artwork since “they look like minors” even with breasts.

The war on is real.

The war on is real indeed.

Patreon’s political drivel is easy to spot when your lens can see through the bullsh*t.

Pay attention to these 2 lines:

“Some details like a big head, big eyes, and short height can make the characters look younger.”

“In order to make them look like adults, the face is the most important part”.

These 2 sentences are related and it’s no coincidence.

We all know how characters typically look. Not to mention Japanese style art in general.

It’s normal for characters to have “big eyes” to some degree. But that doesn’t necessarily mean they’re minors, or they’re being sexualized or anything like that.

Look at this image as a perfect example.

The left image is an style drawing.

The right image is a westernized style from a cartoon point of view.

Patreon might not been straightforward about it, but what they mean is Japanese style drawings are a problem.

They’re being politically correct and “careful” about how they word it to avoid ruffling too many feathers.

Anyone with common sense knows anime characters are drawn this way, and ONLY westernized characters don’t fit that description.

Patreon’s not a fan of designs or Japanese art, it’s that simple.

2. If she’s short or she’s underage, and we won’t allow it

I made a guideline for the new criteria. Remember, that actual age of the character doesn’t matter, it’s how it’s presented. Thank you Dr. Stone. pic.twitter.com/iskRh31Dwi

This meme makes a comical point about Patreon’s guidelines.

Short or is relating to Japanese style drawings in particular.

The problem here is Patreon is looking at this through a bias lens and a western perspective. They’re not looking at it holistically or from a bigger picture.

It’s not so simple you can shove it in a tiny box and define it by the size of that box. 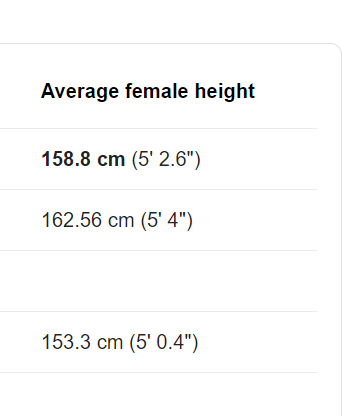 characters for one are BASED on Japanese people. Not always, but there’s plenty of hints.

Take the screenshots above for proof. The average height of a Japanese woman is 5 ft 2.

Does that mean Japanese women are minors, children, and they’re not “womanly” enough by Patreon’s logic?

Judging and banning artists for drawing characters that “fit the bill” by Japanese standards is borderline prejudice, or even colonist.

It’s the equivalent of forcing someone to bend to your worldview because you don’t agree with theirs. And then shunning that person for daring to not bow down.

Related: Why The United Nations “Fight” To Ban Anime Doesn’t Make Any Sense

And the last part of Patreon’s argument is about what qualifies as a woman vs a child in a design.

“Big hips, big ” is somewhat acceptable, though the lines are blurry. Anything that doesn’t reflect that is judged as a minor.

The problem with this logic is not all women of age have an hour-glass figure. Or a body like Trina, Beyonce, or whichever celebrity you wanna use to make a point.

It’s almost as if Patreon is indirectly judging women who don’t fit a stereotype, while censoring artists who don’t follow their strict but vague guidelines on designs that are acceptable.

Banning sexual depiction of minors on their website would be fine if patreon had any understanding of what a minor is, or if they had any consistency at all. Banning any and all artwork is a ridiculous overcorrection and is only going to blow up in their face.

Like I’m not talking about drawings either. Animals died and one of the perpetrators has a patreon while you’re out here banning t*tties.

The guy who who f*cked a dog is still on patreon but is the problem https://t.co/XyuCYbIh9o

Remember, Patreon will ban you for drawing.. .

Meanwhile, K*ro the Wolf, the Zoo Sadíst still has an active Patreon, completely untouched even after he’s been exposed to be a violator of animal corpses and his dog.

Shows you where they have their priorities. https://t.co/ZuxBYDQs6I

As pointed out more than once, there’s a Patreon user known for animal bestiality. They’ve done some extreme things.

Patreon has done nothing so far and doesn’t seem to have an issue with it. Even though they’re so determined to ban anime designs from artists, which is fictional.

Relevant: The Problem With Anime Feminists In The West (And The Hidden Agenda)

The war on is real, and this will continue

Jokes aside – is under attack and it won’t stop anytime soon. I’ve talked about this for a good while.

As long as keeps getting bigger, and the LOUD minority keeps outraging (as well as companies censoring ) we can expect to see more.

Patreon artists are best off building their own brand, or else this type of thing is gonna kill them going forward.

That’s true for western platforms trying to “regulate” in general. They don’t give a F about you. Only their political agenda.