I don’t usually talk about stuff like this. Mostly because it’s not common in the community and because of the “dark” nature connected to it. But I had to share it.

It’s a good time to talk about it because it reminds me of something relevant.

There is news today of a young woman, Cleo, who allegedly took her life over harassment from the #RWBY community. Here is the blog discussing what occurred if you would like to read it and form your own opinions. https://t.co/oKvNbQ5EbC
Thank you @SparrowsAlbion for sharing this

As you can see in the Tweet by Hero Hei – this girl committed suicide after being harassed by the RWBY community.

And guess what caused it? That’s right – nothing other than the ridiculous arguments over “shipping” characters.

Something as petty as this is what drove the fanbase to belittle the girl. To the point of taking her own life after being exposed to so much hate for having a “different opinion”. 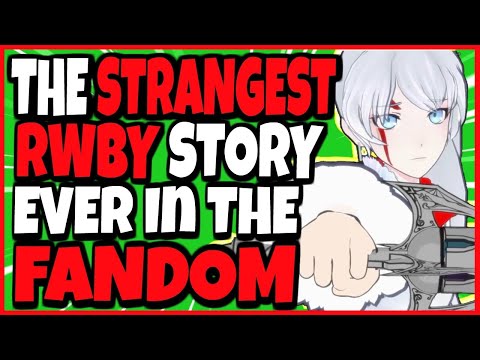 A video by Hero Hei goes into a little more depth about what happened and why. 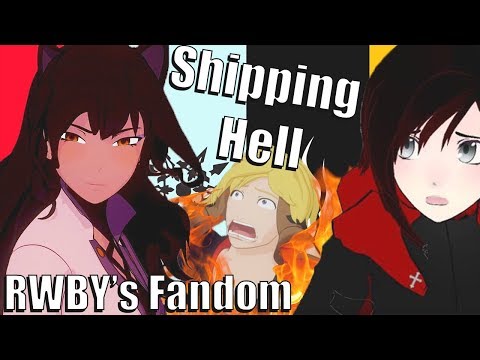 This isn’t news for the RWBY fandom. It’s been toxic for years over the same things that caused a girl (called Cleo) to take her own life.

And this seems to be the sad end result of all this “toxic” behaviour that’s built up over the years.

A Heartfelt Message to Cleo (the victim) 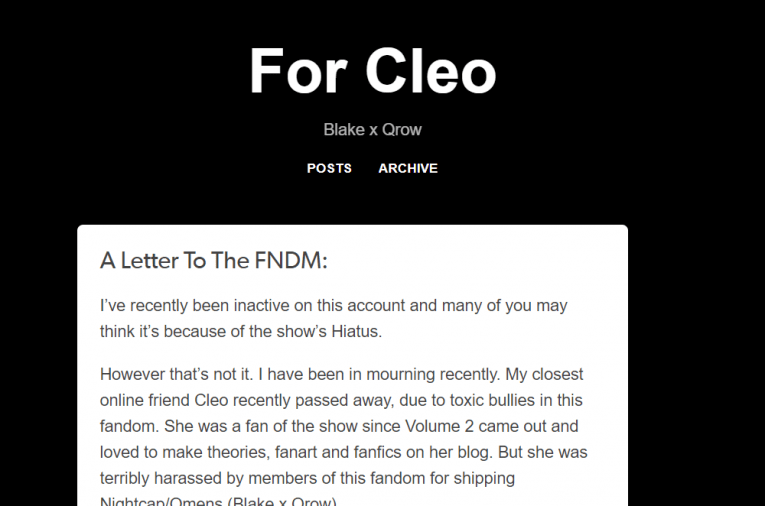 A Twitter user (who’s also on Tumblr), the friend of Cleo wrote a personal letter.

Here’s what she had to say about the incident:

“I’ve recently been inactive on this account and many of you may think it’s because of the show’s Hiatus.

However that’s not it. I have been in mourning recently. My closest online friend Cleo recently passed away, due to toxic bullies in this fandom. She was a fan of the show since Volume 2 came out and loved to make theories, fanart and fanfics on her blog. But she was terribly harassed by members of this fandom for shipping Nightcap/Omens (Blake x Qrow).

I made this blog for her, she couldn’t Photoshop very well and wanted my help to make some Manips of her ship. I agreed, since I love her and I came to love her ship. She would support me and she felt safe and loved over her ship where she was used to feeling hate.

She came to me 3 months ago with disgusting anon asks, horrifying messages and even hate posts on Dicord chats made towards her.

These people were calling her a wh*re, a r*pist’s puppet, a c*mslut and many disgusting things just because she was a shipper.

I understand some people don’t like older/younger relationships, for very valid reasons, but that does NOT give you the right to drive someone to end their life.

Cleo suffered from Depression, Autism and PTSD but she was a bright light and the sweetest angel you could of had the pleasure to talk to. I miss her everyday and will never forget how she made me feel, how she was always there for me and how she will always be present on this blog.”

You can read the rest here:

A Letter To Cleo

This nonsense needs to STOP

Sadly, toxic RWBY fans will probably defend each other and just make things even worse for them by being insensitive about it. Also, making someone commit suicide can get you prison time.https://t.co/i7AmNlKcVZ

hey @RoosterTeeth , your rwby fandom has devolved to the literal suicide of a girl now for an “inappropriate” ship, can we please get some input from you guys? the state of this fndm has got too far.https://t.co/iL3ggXD981

All of the cowards who no doubt have deep personal issues are walking around as if nothing ever happened. And they get to turn their back and act as if they had NO part in the eventual suicide.

All of this happened over fictional characters and the fictional “shipping” of characters within an anime fandom.

Something that petty should NEVER have gotten this out of hand.

The fact that it has speaks volumes to the types of people we have running around in our society, spewing hatred online without being held accountable for their actions.

The community can do better

Hi, I’m theblackcatandthecrow from Tumblr. Thank you so much for sharing Cleo’s story. It means a lot to see you raising awareness for her

I’m optimistic this won’t turn into a trend, but it’s sad news regardless.

Let’s hope for the best for her family and friends.