is diverse. That means there’s a lot to it.

has SO MUCH choice, that every type of fan will find something that suits their taste.

But even so – there are some shows, as far as I see it, that will make you cringe because of how terrible, poorly done, or “strange” they are.

Sometimes even the best can make you cringe as well.

Here’s a list of shows to think about before you decide to go through with it. 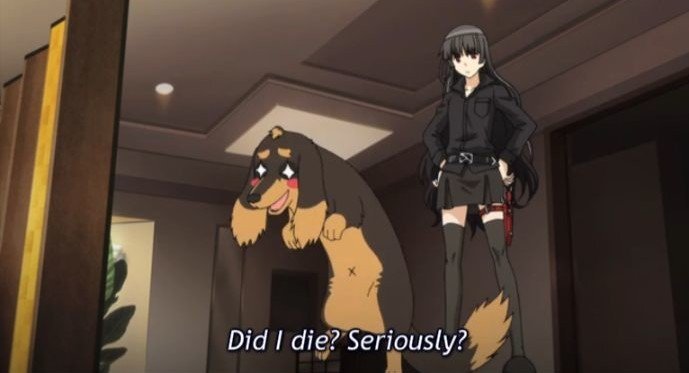 Dog And Scissors… how do I even describe this crazy series.

When I first seen it I thought “hmmm, even though the ratings aren’t perfect, It “could” surprise me”. Of course by surprise I meant impress. But it surprised me alright with how strange and odd the comedy is. 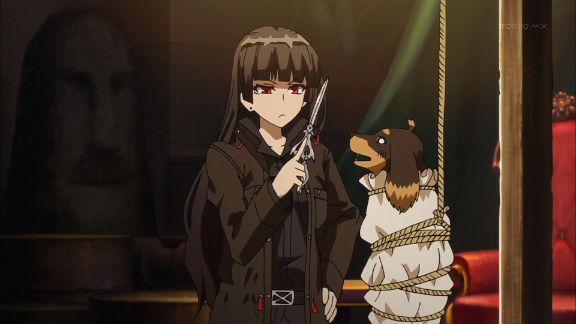 The main male character is reborn as a dog after he’s murdered. During his death, there’s a girl with long black hair who’s at the “crime” scene.

Well, this girl is a lunatic who gets “aroused” from torturing Harumi (the guy who’s reborn as a , helpless little dog). And that’s all the is about: torture and weird animal fetishes. 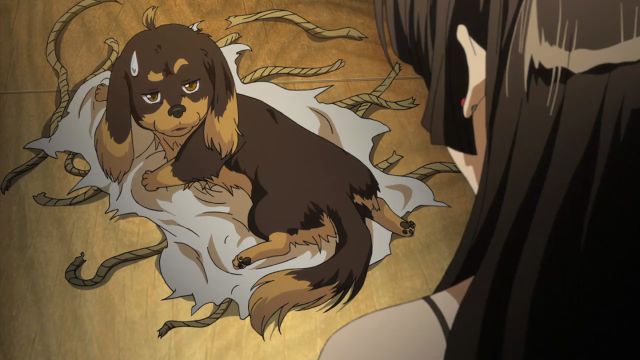 I dare you to watch this ALL the way through, without cringing or dipping your head into a cold bucket of water… I’ll give you some -related merch for FREE if you manage.

Related: 10 Anime Shows That Were So Awful I Dropped It 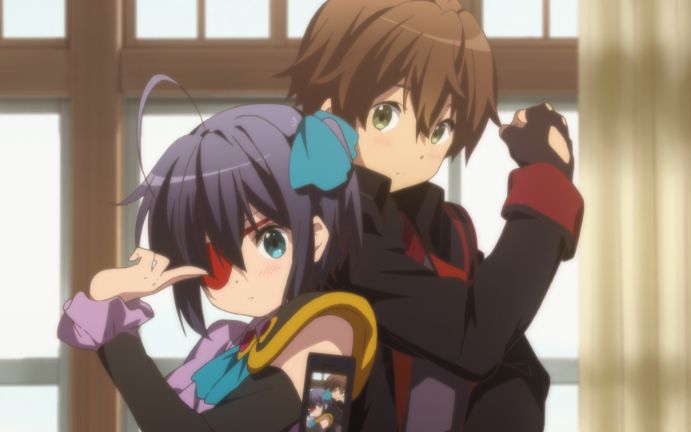 I admit – this ’s one of my “lowkey” favorite romance series. And I’m not even the biggest fan of romance, either.

But I didn’t feel this way in the beginning. That’s why I dropped it before episode 5. 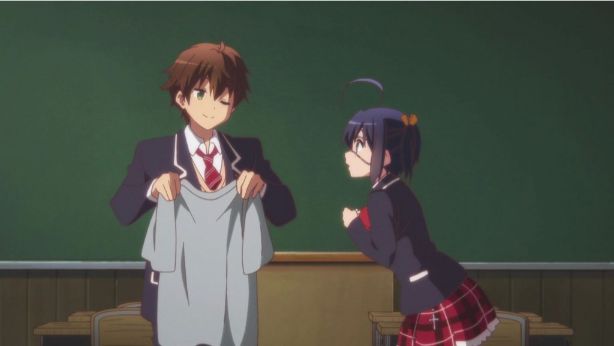 But something pulled me back and said “give it a chance” and so I did. And it still made me cringe at the comedy and delusional behavior of the main character: Rikka Takanashi.

By this point you’ll either love this series, or you’ll hate it because of how bad it makes you cringe. But if you pull through – this is a rewarding with some of the best romance and comedy I’ve witnessed.

The characters are memorable, and the comedy has its own flavor. Making it “nothing” like you’ll ever taste as far as rom-com or slice of life in general. 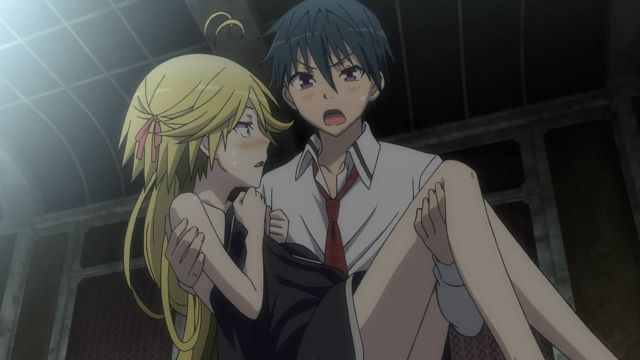 I’ve seen a TON of . It’s far from my favorite genre, because it’s too cliché, corny and tries too hard to provoke laughter. It’s as if the creators get ”lazy” with most of the time.

Trinity Seven is that kind of . There’s nothing special, rewarding or even “good” about it. 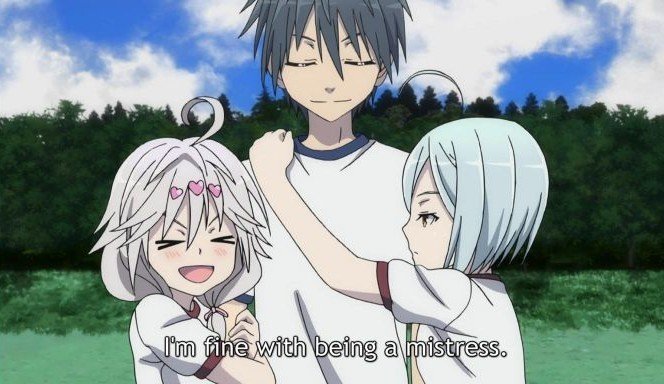 Within the first few episodes I cringed and face-palmed myself at the desperate attempts to show fan service and the same old harems we’ve seen 1000’’s of times. In a way that’s uninspiring..

There’s nothing new and nothing about it makes me want to say “this deserves a chance”. Especially with how much it makes you cringe at the characters and nonsensical “copy n paste” style of storytelling.

4. How clumsy you are, Miss Ueno 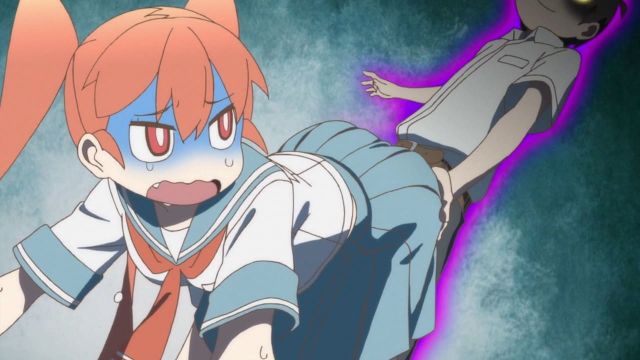 When you watch 1 episode of an , and it feels like you’re dragging yourself along the floor, that’s always a bad sign.

But when you take the audacious, ballsy ideas of getting another character to drink “piss” transformed into water, it can only make you scratch your head. 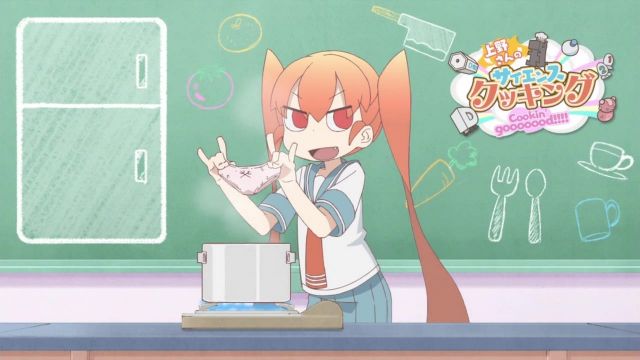 This is supposed to be “”comedy”, and I get it: Japan’s idea of comedy is different to the west and the world in general.

But How Clumsy You Are, Miss Ueno might be too much. And you’ll cringe as soon as the begins. All the way to the end of the series. 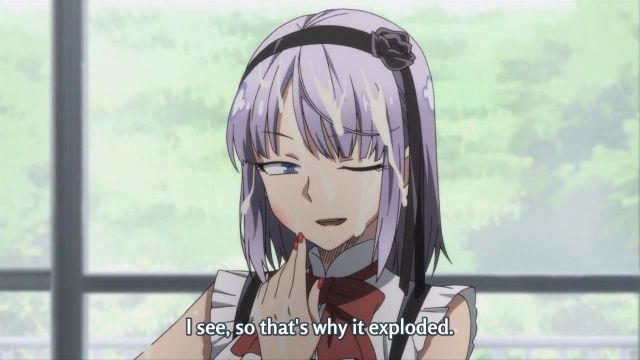 Dagashi Kashi is all about Japanese sweets. The “” kind in Japan.

You could  go as far as saying the ’s purpose is to “advertise” Dagashi sweets, and nothing more.

That’s how “all out” they went in producing this , and basing everything around Dagashi. 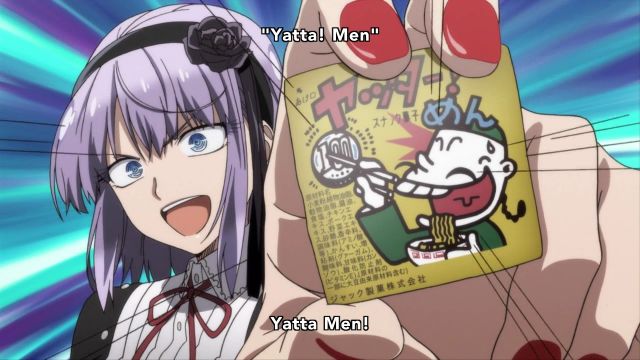 I’ve watched ALL of Dagashi Kashi, so I know as an   it’s “decent” but nothing more than that.

The comedy is littered with scenes that will make the average fan “cringe” and roll your eyes. Because at times it’s a little much to deal with, or even take seriously.

But with that said – it’s still an OK show.

But that depends on how you see it, and what it is you’re looking for in a comedy series. 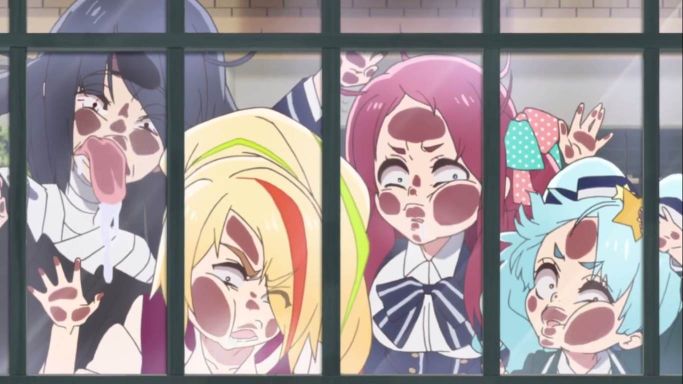 That’s right – I said it. Zombieland Saga is an that’s cringy, weird, strange and doesn’t make sense to me. And I say that in spite of how popular or socially “accepted” this is in 2019.

You can think of Zombieland Saga as a “strange” version of Love Live School Idol Project. 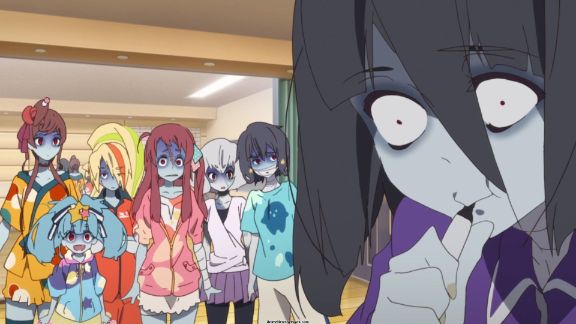 Each character has their own personality, quirks and designs that help them “stand out” from the crowd.

But how the comes about, and the story that follows will make you question WTF is going on. Depending on what kind of fan you are, and what you’re drawn to.

A Boring World Where The Concept Of Dirty Jokes Doesn’t Exist. That’s the LONG title of this series in plan English.

It’s ridiculous, I know. But that’s a simple breakdown of WHAT you’re getting into before watching….

Even though I rate this 9/10 without hesitating, I can see how “cringy” it is. Even if you love .

First of all – Blue Snow (main character) wears underpants over her head. She does this to make a crude point against the SJW’S she fights against.

And that by itself doesn’t even scratch the surface for how cringy this gets. But you still might love it, regardless.

Related: 5 Unforgettable Life Lessons To Be Learned From Shimoneta 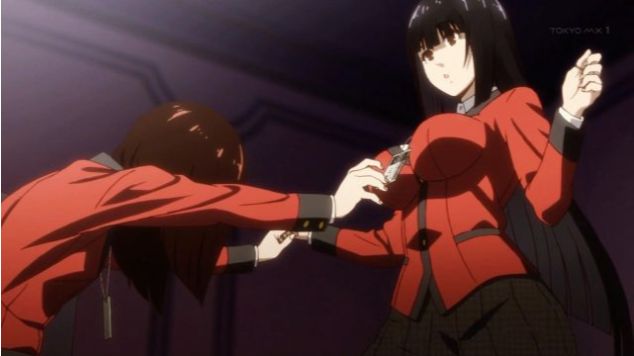 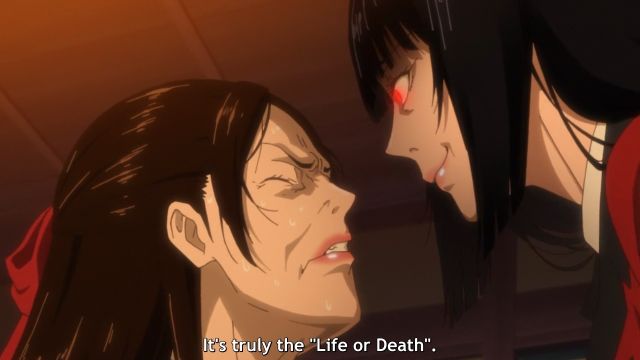 And then there are characters, especially towards the last few episodes, that are so crazy you’d be mad not to cringe as you see things play out.

If you love strategy and a “risk taking” approach to playing , you’ll love Kakegurui. But it all comes down to what you want, and what your threshold is. 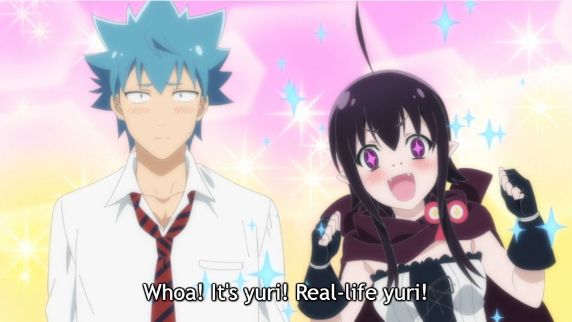 Love Tyrant is the silliest parody I’ll ever see for as long as lives. And I’m not talking “Gintama” type of silly.

No, I mean the kind of silly that makes yo wanna drop the you’re watching.

Then forget everything you’ve just seen. 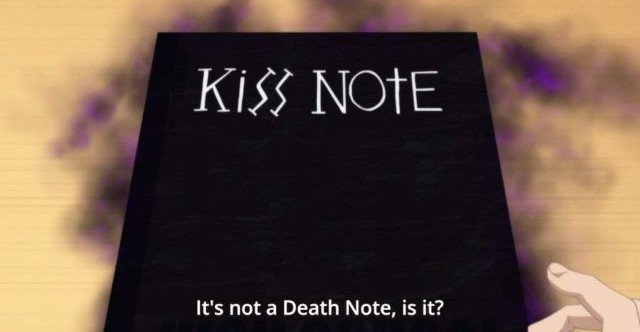 The concept is taken from Death Note. Every person who’s name is written in the Kiss Note falls in love with the person who wrote it.To the point they’d do ANYTHING.

Even commit suicide if it’s asked of them.

But the comedy is a load of “bollocks” as we say in the UK. At best it’s plain and at worst it’s a copy and paste of everything you’ve already seen.

And that’s on top of how much you’ll cringe trying to get through each episode. 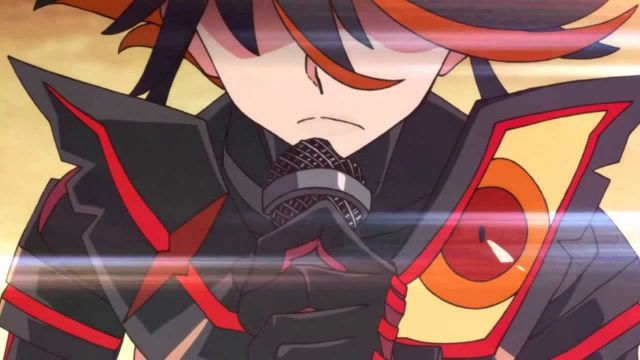 Kill La  Kill – yes, one of my favorite anime shows of ALL time. I’ll never forget it for as long as I live.

But… I admit. This is the type of that WILL make you cringe at the characters awkward, sexual positions. And the angles the camera points at. 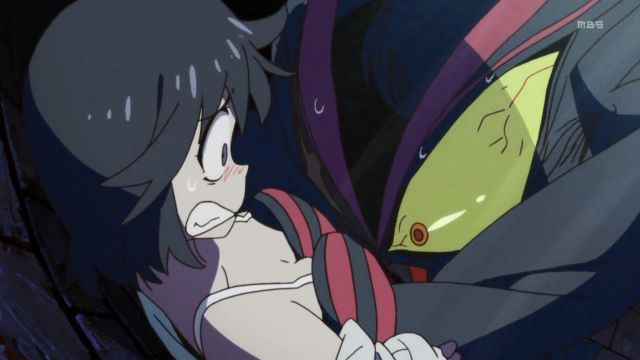 To me – Kill La Kill is a rare example of an “” series done right. It’s not trashy, and the fan service doesn’t take away from the flashy action and the sleek animation.

But even still – I’m sure there are fans who might “cringe” no matter how good is. Or how well-crafted it is as far as story and plot.

11. The Familiar Of Zero 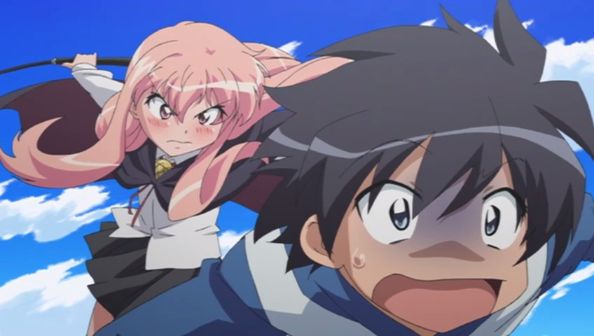 The Familiar Of Zero is an about abuse. Or it might as well be.

It takes the typical “Tsundere” arch type and drives it so far up the wall it’s out of reach. And insane by “Tsundere” standards. 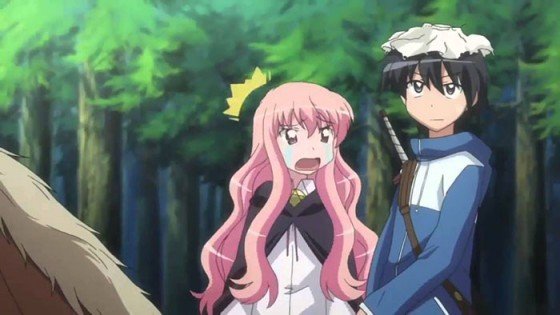 The main character falls in love with a crazy girl who abuses, whips and “beats the living sh** out of him”, literally. And that to me is the part that makes me cringe. It’s bound to make a  lot of “fans” cringe as well (as I know first hand).

But if not – each to their own. Just know the comedy is different to what you’re used to seeing. 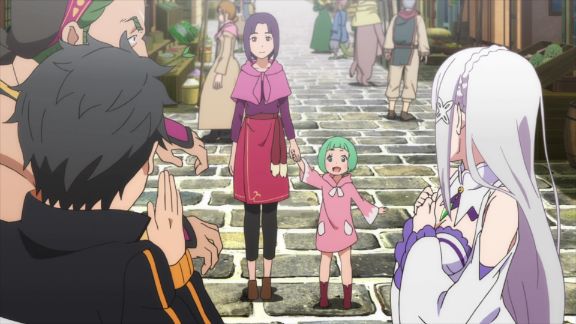 And we’ll end this with Re:Zero – Starting Life In Another World. A psychological series by White Fox, and dozens of scenes that will make you “cringe” at how vile it is.

Subaru Natsuki is put through hell. And even worse: he’s not allowed to share his problems with anyone, because of a curse that lives inside him. 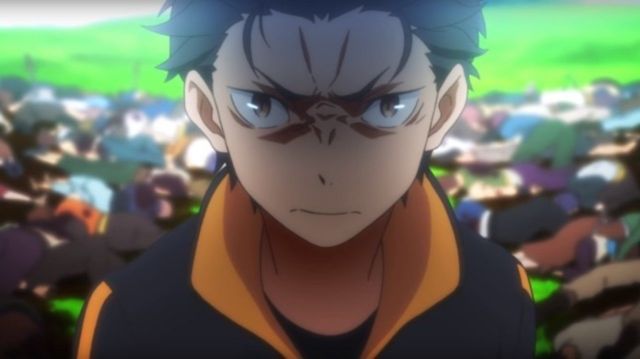 You might cringe at the end of episode 1. Or in the beginning of episode 2, or throughout the entire season at various parts of the . But you’ll cringe one way or another, because that’s the kind of Re:Zero is.

I’d say that’s part of the reason it’s so successful and “high rated” in general. Because the characters and the storytelling is on point, regardless.

Re:zero, zero no tsukaima, chuunibyou, miss-ueno, zombieland saga and trinity seven are cringiest animes? Damn your criteria sucks, but don’t worry, I couldn’t expect less from someone who thinks he can criticize any anime because he watched dragon ball.

Re:Zero as one example is one of my top 10 favorites of all time, and even I can see there are CRINGEY elements to it.

Your childish insecurities couldn’t help you see past that though. Go cry in a corner.

what about Watamote though, It’s the most relatable anime ever.

cringy anime is when someone starts dancing and sings a cheesy song about how we’re all family in life. Trashy dumb anime is my hero academia or dragon ball.

Your list is bad your dick is abnormally small even for an ant’s standards. As the goldfish from bubble guppies once said, “it’s time to go outside. Get. Get. Get. Get. Get out.”

“Theo J Ellis”, if that’s even your real name.

How dare u mention kakeguri

you need to add “My Bride is a Mermaid” to this listing, i tried to just watch at least 3 episodes of it. from the very start its one of those where many cringe elements repeat so much that it begins to hurt so hard. as for “Re:Zero” i was hopeful to that anime. i even watched 2 episodes of it and was trying to be optimistic. It really just felt like if he did anything out of place that he died, as if he can’t decide the fate of things and that he must live some perfect determined life… Read more »