Kamisama Kiss is one of the purest anime’s I have ever seen.

It’s filled with amazing animation, beautiful colors, and good messages. This show will make you involuntarily squeal and it is definitely near the top of my list.

One of the voice actors, J Michael Tatum, does an amazing job voicing the character Tomoe and he also adds a bit of comic relief in the middle of all the drama.

The show is about a girl named Nanami Momozono and how she becomes the resident goddess of the Mikage Shrine in Japan.

The show begins with Nanami being kicked out of her apartment.

Her father doesn’t have the greatest track record and he can’t take care of her, or even himself. While she is walking around the night she gets kicked out, and Nanami saves a stranger from a dog, but she has no idea that the stranger is the god of the Mikage Shrine.

To thank her, the stranger kisses Nanami on the forehead, forcing Nanami to inherit the responsibility of caring for the Mikage Shrine.

By gaining this new responsibility, she also gains a familiar named Tomoe, who often acts like he’s 400% done with everyone and everything, but he always comes through for Nanami.

On more than one occasion, Nanami has to constantly battle evil forces, but she never loses heart and she never gives up.

One of the best things about Kamisama Kiss is watching the relationship between Nanami and Tomoe blossom.

Nanami starts to fall in love with Tomoe, which just adds to all of the feels that this show gives you. This couple is definitely near the top of my “ship list” and I started shipping them when I saw the first episode.

At one point, Tomoe asks Nanami if he can seal the familiar contract with her, which is the same as asking if he can kiss her. If that scene does not make you squeal uncontrollably, there must be something wrong with you. 🙁 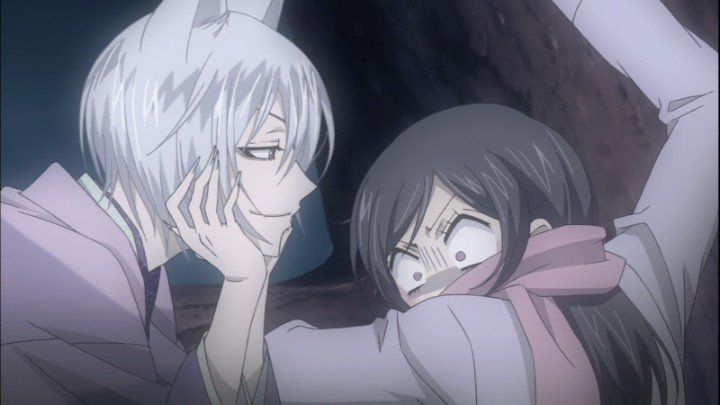 The colors in the show are often pastel and beautiful, and the artwork is well done. Tomoe likes to wear colorful kimonos, and those colors add to the overall beauty of his character.

This show is amazing because it’s so pure.

Kamisama Kiss has some fight scenes here and there, but it’s an overall a great anime for its romance.

It shows examples of good relationships and morals as well as how to act in stressful and tense situations. Even if you do not believe in Japanese gods, Kamisama Kiss is still well worth a watch.

The best lesson you can learn from Kamisama Kiss is – taking on responsibility is important, especially when you’re not expecting it.

Nanami was certainly not expecting to become the goddess of a shrine that she would have to care for, but she accepted the challenge anyway. This challenge drastically changed her life, but she rolled with it.

Life is always throwing us curve-balls, and we just have to find a way to deal with it like Nanami!

The Most Important Life Lessons D. Gray Man Taught Me