I’m obviously not in this age group, but I’ve spoke to fans around 40+ before. And nobody’s addressed this topic so I wanna touch on it.

It’s a tough thing to address from my point of view because most fans are Millennials or teenagers.

I can only put myself in a 40+ year old fans shoes and be broad with my choices.

So with that said, here’s some relevant worth sharing. 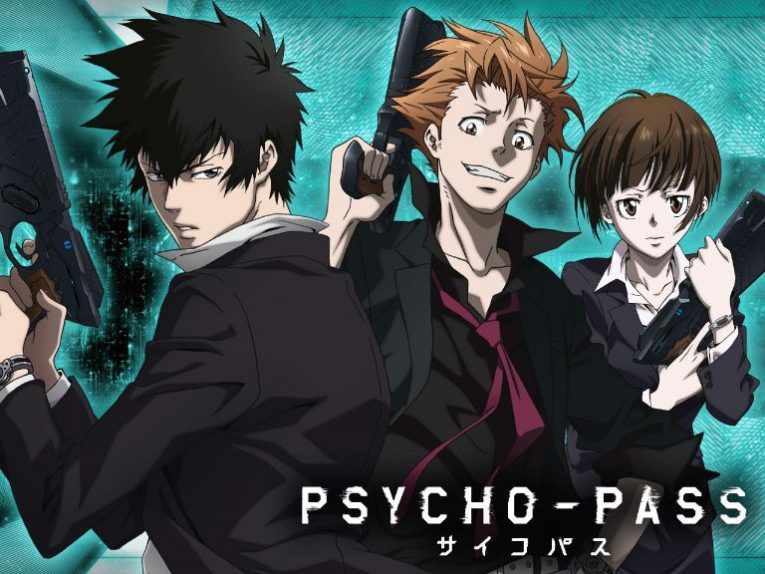 Psycho Pass is an underrated series these days. Not many people talk about it as much.

The police force works to monitor society with a gun called a “dominator” which measures a person’s Psycho Pass (mental health).

Under the surface and further down the line, it’s a thought provoking, and clever series with GREAT characters.

Akane Tsunemori is an example of a female lead that outshines most. 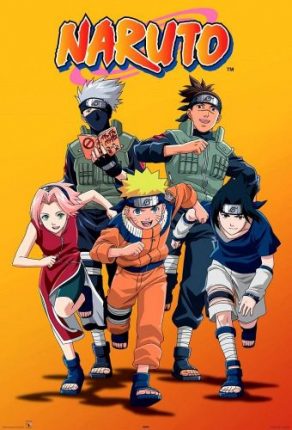 anime for all ages.

Not just that, but is an with characters of all ages as well, including Kakashi, the Hokage and so on.

Life lessons you can learn from :

goes into so much as an , and age tends to be used to put people’s interest in a box.

I disagree with that notion and feel should be a solid choice for 40+ year olds.

Relevant: 16+ Funny Anime Shows That Will Cheer You Up On A Bad Day 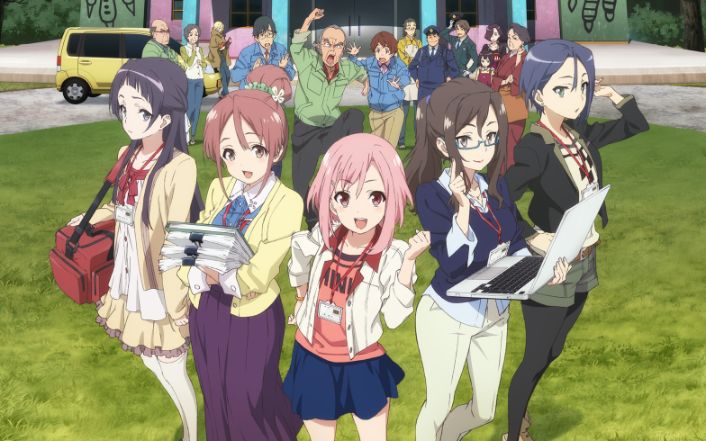 Sakura Quest is an in the rural country side of manoyama, a real Japanese village.

Yoshino Koharu, a main character from Tokyo ends up in manoyama by mistake, and takes on a tourism job.

You get a lot of business elements here, since everyone’s working to make manoyama a thriving village once again where people come to do business and travel.

The teamwork, friendships, hard work and slice of life elements is something everyone can appreciate and connect with. 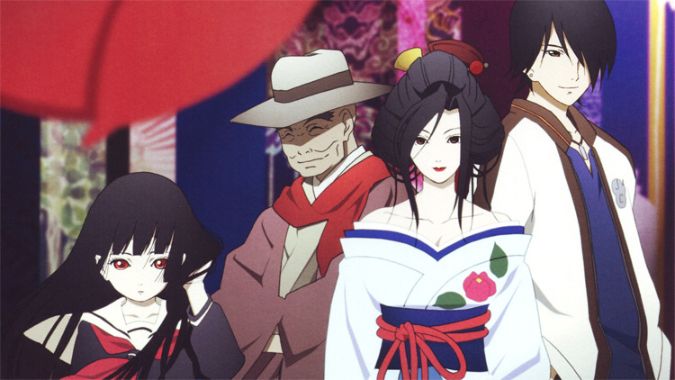 Hell Girl is a character who sends people to hell for doing wrong. But only when a victim summons her at 12AM to seek their revenge.

The is realistic and tells all kinds of stories, episode by episode, and never repeats the same story twice.

There is a repetitive element since the first 10-ish episodes follow a format, but it’s content, and to me is an underrated in the horror genre.

It’s worth checking out. 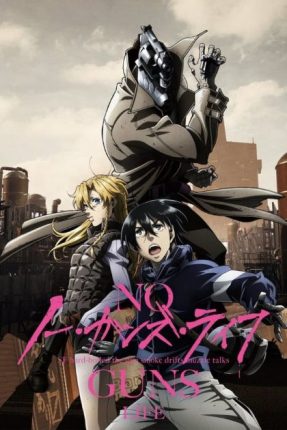 Made by Madhouse (like a couple of good Seinen) the art style has more realism to it than your average . And it’s about ex-war veterans and their new lives after being modified, physically.

It moves at a nice pace that I appreciate, and has a subtle mix of comedic elements with its more serious tones and meaningful episodes.

6. How Heavy Are The Dumbbells You Lift? 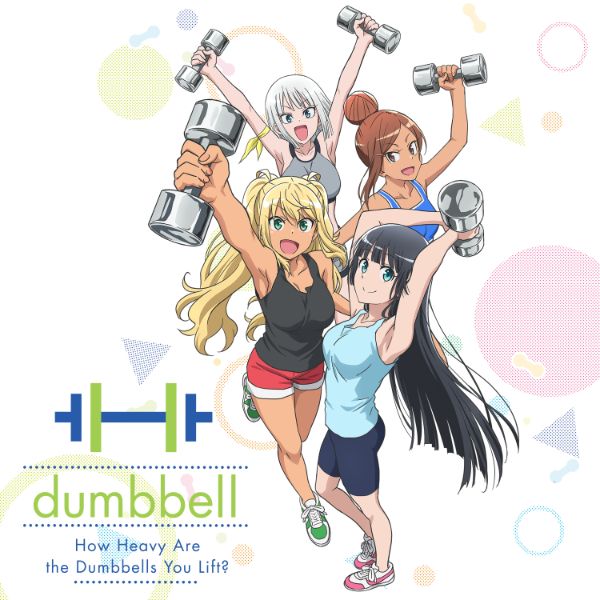 How Heavy Are The Dumbbells You Lift? Is a bit of a silly, daft, entertaining and fun series.

It’s about going to gym, exercise, and living a “keep fit” lifestyle as far as workouts and even foods to eat.

You get to learn all about it in the stupidest but funniest way possible (with a little cringe to top it off). But in a good way.

It’s as good as it gets as far as that manage to be under the surface, but silly in a way it presents itself. 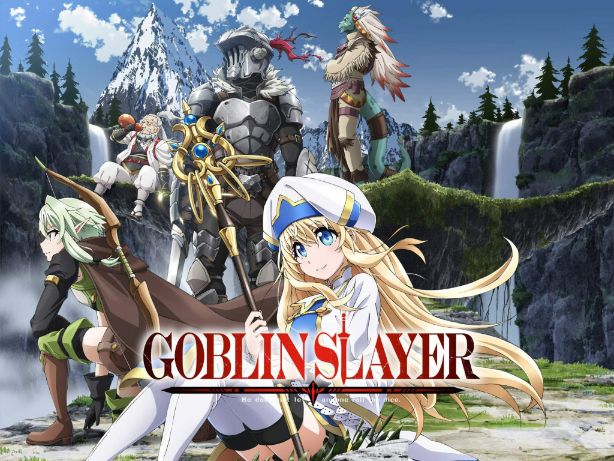 Goblin Slayer is a brutal, savage, dark fantasy series that’s stirred up all kinds of controversy. But that’s mostly with a minority in the community.

Ignoring the first episode’s dramatic introduction, Goblin Slayer is an I’d have no problem watching as a 40+ year old.

Tons of adventures, comical conversations and dialogue, violence, action and characters of all ages.

A season 2 would be nice. 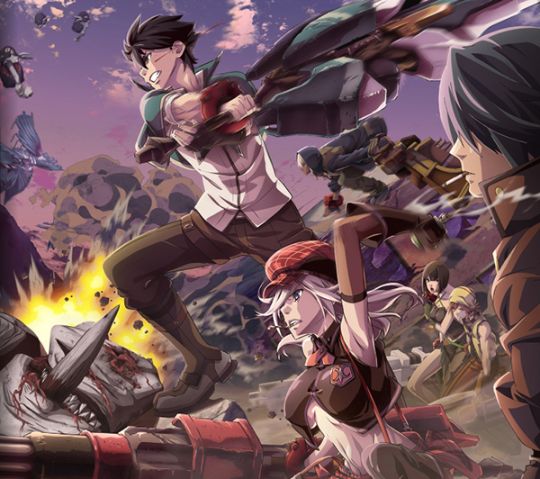 God Eater is an you don’t see too often in recommendations online. But it’s one of the best horror style shows I’ve seen.

I just don’t talk about it much.

Lenka Itsugi is the main character who wants revenge against the Origami (a type of monster), so the theme is close to Attack On Titan and Owari No Seraph.

The main stand out feature of God Eater is the animation quality and the top notch CGI. Almost no CGI comes close.

The theme is dark enough for anyone to watch but the visuals are something else. 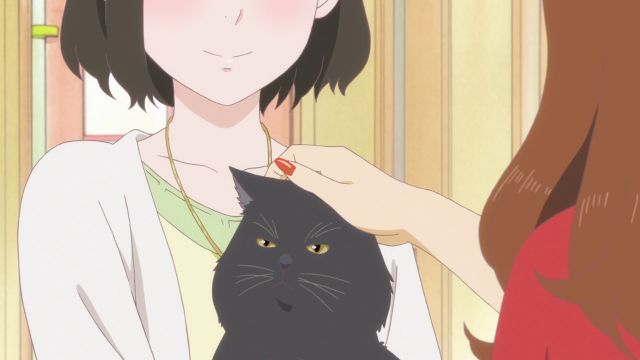 She And Her Cat is one of my favorite from Makoto Shinkai.

It’s a movie about Miyu, a girl who’s somewhat depressed, and how her cat – Chobi observes her daily life.

It’s all from the cat’s point of view and that’s what makes this movie so unique and different.

It’s packed with themes and messages and I can’t see most of any age not being interested in this.

10. Guardian Of The Sacred Spirit 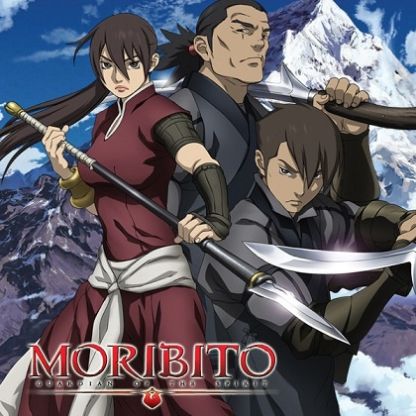 One of my underrated favorites that I don’t talk about too much.

Moribito is made by Production I.G, same studio as Psycho Pass.

It’s about a female warrior who becomes a bodyguard for a prince. And their journey and adventures together.

A lot of “mother-son” types of bonds and relationships going on here. And some action to change up the pace when necessary.

The ending (and ) is spot on. Deserves more credit. 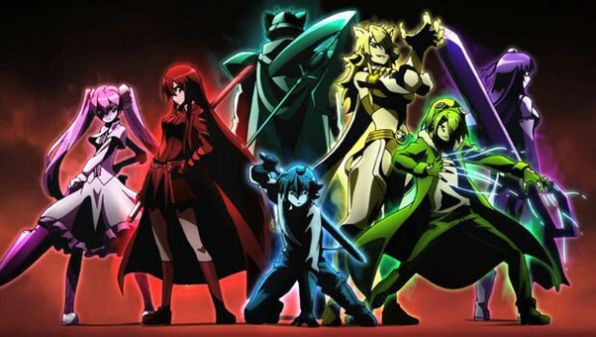 mature Shounen and in a league of its own for that.

It’s about a group of assassins called Night Raid, and their mission to destroy the corrupt government and create a revolution.

Poverty, impossible taxes, beheadings for even disagreeing with politics or how things work… The society in this is a literal hell and it gives a lot of purpose (especially since when characters die, they die, it’s realistic). 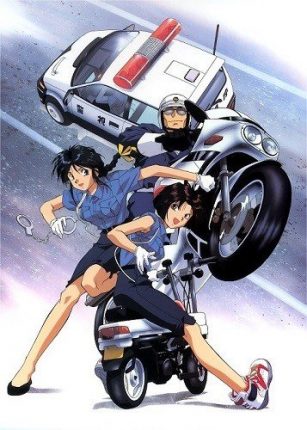 You’re Under Arrest is about two female police officers.

Natsumi Tsujimoto knows martial arts and uses it to take down and apprehend criminals.

Miyuki Kobayakawa is the “brains” of the team, and uses tactics, strategy and more to catch criminals.

It’s an old school series (1980’s) but there’s something about the animation, the themes, and the characters that makes this worth mentioning.

Even if it’s no longer relevant today. 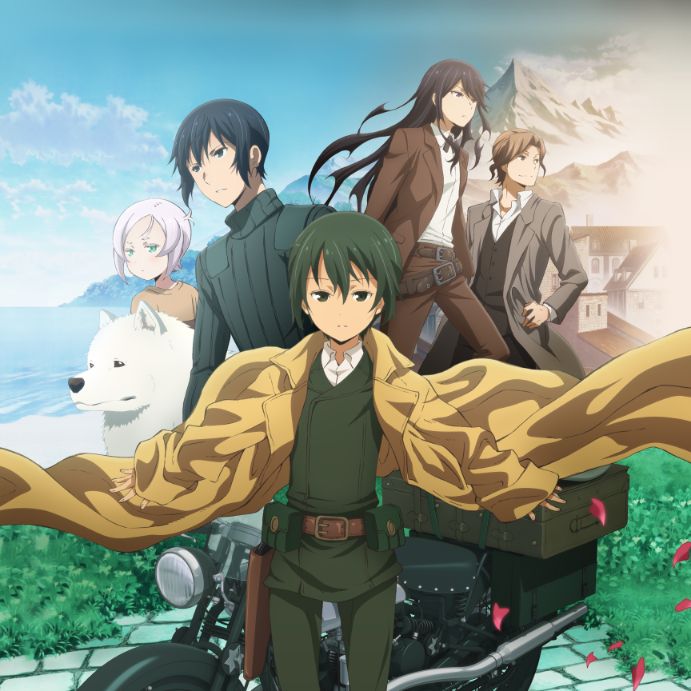 Kino’s Journey is the new version of Kino’s Travels (which was made in the 2000’s).

The is about Kino, a girl who travels the world on her motorbike. Staying in each town, village, city or country for no more than 3 days.

She feels if she stays any longer, she’ll get “too comfortable”.

There are almost no comparable like this, and the travelling aspect and each adventure brings something fresh to the table.

It’s an all rounder as far as appeal.

Related: The Ultimate List Of “Slice Of Life” Anime 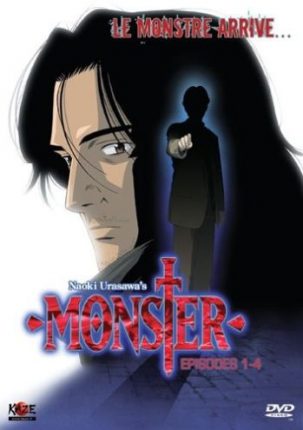 Another one by Madhouse studios, Monster isn’t an everyone can appreciate.

It starts off slow, is a psychological series with serial killers, and is more thought provoking than it is flashy or “cool”.

But for anyone with the patience or a taste for this horror series, it’s nothing short of a masterpiece and few today can compare to it (in similar genres).

It’s a classic that deserves much more credit today. 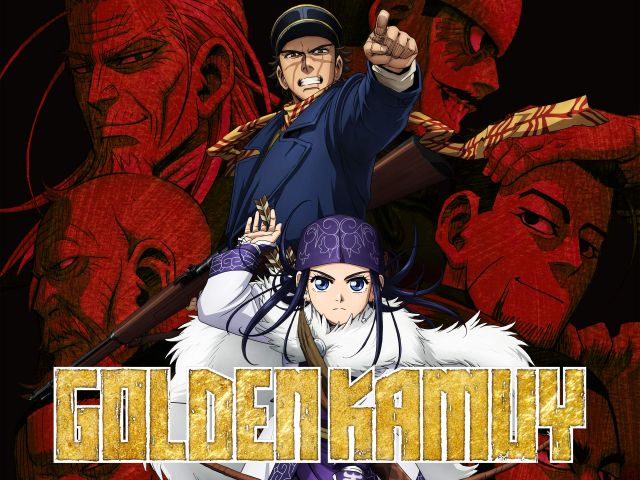 Golden Kamuy’s another underrated series few shout about. It has a 3rd season on the way.

The is about the hunt for “gold” without saying too much. But one thing unique about it is the historical elements.

The Ainu (an ancient ethnic group in Japan) plays a big role in Golden Kamuy’s story and context. It’s one of the ‘s best highlights because of the depth it goes into.

I’ve never seen an like it and it’s definitely catered to a mature group of fans. 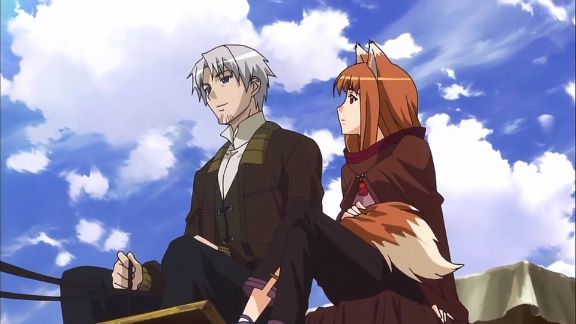 Spice And Wolf is another unique series that fits the bill.

The follows a female and male main character who travel and make together (stocks, etc).

Both Holo and Lawrence (main characters) have a synergy and chemistry to their role that makes them a memorable pair.

It’s an that will teach you more about economics, and business than you’ll ever learn in school.

So if you’re into business or finance topics this should be right up your alley. 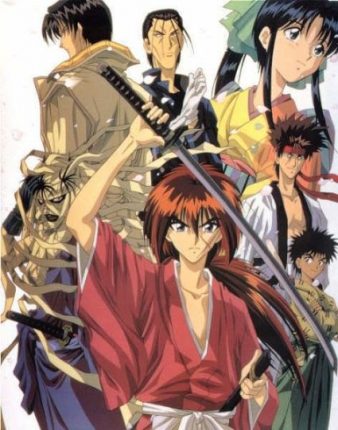 Rurouni Kenshin is a samurai classic. Not my personal favorite but I enjoyed watching it and appreciate the art and story.

It’s about Kenshin Himura, who has a bloody past from the previous war where he earned the name “man slayer”.

He’s trying to put the past behind him and even uses the reverse end of his blade in self defense to avoid “killing” anyone.

This burden makes Kenshin a character who’s easy to connect with and understand, and even like because it takes a lot of inner strength to achieve a thing like that. 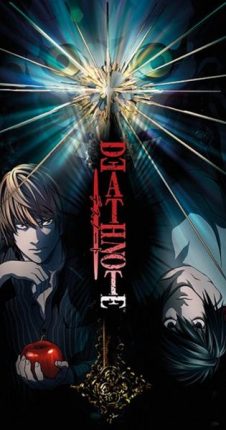 No matter how I look at it Death Note has to be mentioned. It’s a masterpiece with some of the most clever characters, plot and villains seen in the industry to this day.

This is a rare considering how it is, because all ages seem to like it (which makes sense).

If you like to think about what you’re watching, you’ll fall in love with this. 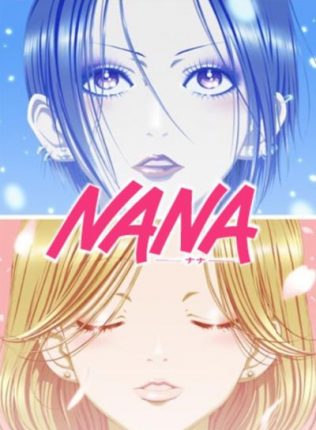 A realistic series about 2 girls called Nana, who live together.

One is chasing her dreams as a musician, the other is “stuck” and isn’t sure what she wants to make of herself. But is energetic, cheerful and optimistic.

The explores relationships, romance, sex, hardships and a lot more wrapped into one slice of life series.

This is the kind of you can learn from or relate to in so many ways. 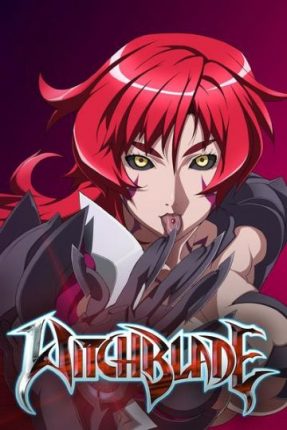 Witchblade is a forgotten in 2020, about a woman and her child who are on the run.

The woman (Masane Amaha) has the “witch blade” attached to her arm, which transforms her into a creature, forcefully.

Why Adults Should Watch Anime, Even If You Feel Too Old For It