The six paths of pain in Shippuden played an iconic role in the story.

There aren’t many arcs you can compare for its:

And so many other things in the series.

Hate them or love them for their savage methods of bringing so called “peace”, but they’re villains unlike any other.

Here are some life lessons from the six paths of pain.

1. Too much pain makes a good person evil 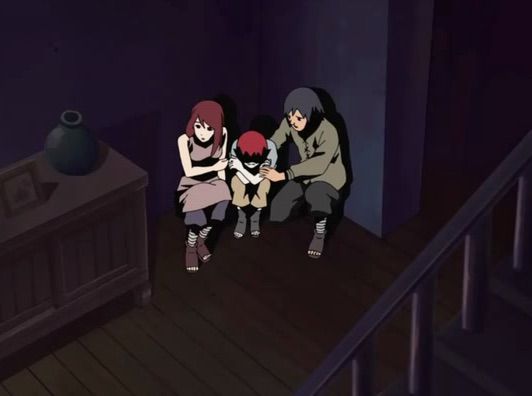 In the beginning of Pain’s story, Yahiko and Nagato in particular are good hearted people.

They’re only kids at the time.

Nagato is an innocent child who’s family is killed “by accident” because of the incompetence of the leaf village: Konoha.

Konoha soldiers end up killing Nagato’s family believing they’re enemies during the 2nd Shinobi war, since there weren’t many civilians in the area. 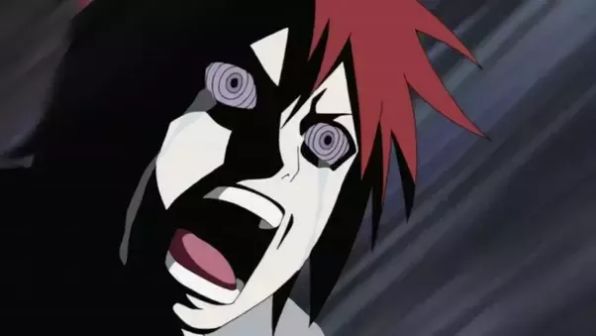 This is the first experience of “pain” that eventually leads this kid into a life of murder, savagery, and serial killing.

It happens gradually, sometime after experiencing more deaths in his life and becoming older than a teenager.

At some point Nagato can’t take it anymore, and so he turns to vengeance on a mass scale.

Yahiko’s death is another moment of “pain” that pushes him onto this path. In fact it’s one of the key moments that drives him down the path of darkness.

The way Yahiko dies, and how Hanzo who kills Yahiko then tries killing Nagato… The evil of the world makes him see how cruel life is. 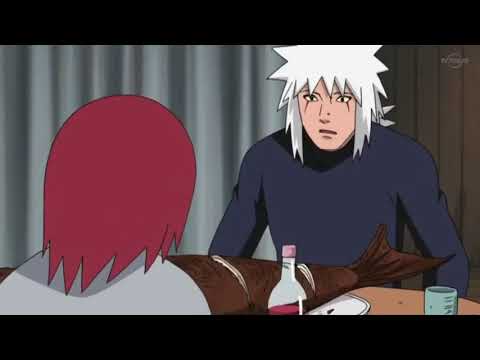 Jiraiya, Nagato’s sensei was his only “light”. But he didn’t stay around forever or long enough to steer Nagato and his comrades away from the dark side.

At some point after fending for themselves with Jiraiya’s help, it’s too late and the pain becomes too unbearable.

Causing the world pain is how he ends up dealing with his own.

2. The path of “evil” is easier to justify 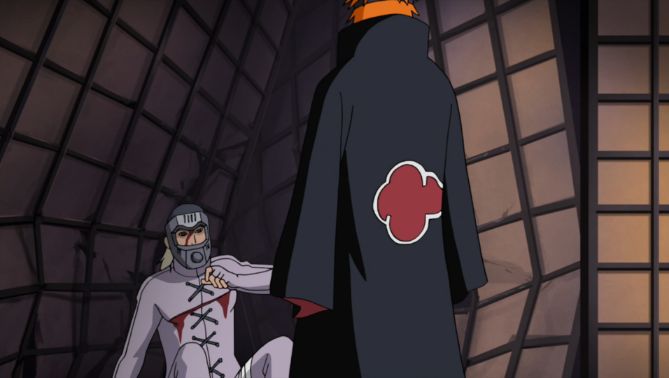 As a testament to my point, Nagato (and the six paths of pain) eventually kill Hanzo and all his Shinobi.

But he doesn’t stop there.

Nagato then murders EVERYONE in connection with Hanzo, or anyone who knew or is associated with Hanzo.

And anyone with even the slightest connection to Hanzo’s life.

Nagato (and the six paths of pain) essentially become serial killers to erase Hanzo’s existence, and to express their level of hatred towards the man.

Hatred that started when Hanzo forced Yahiko (Nagato’s friend) to kill himself.

In the end it’s justified (and easier to), even if it was to the extreme. 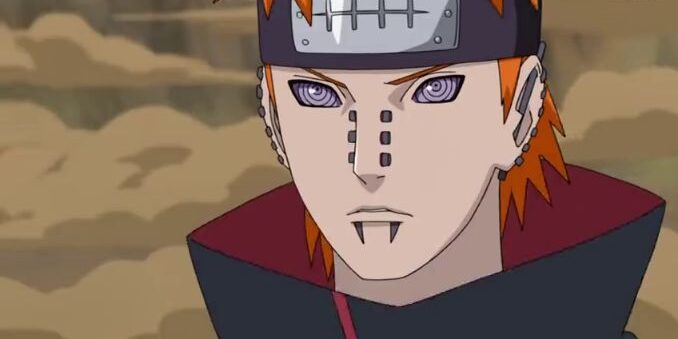 When “pain” is all you know, depending on how deep the wounds are, the path of evil is easier to justify than the opposite.

It’s easier to walk into the darkness than it is to remain in the light and “forgive” or forget the pain of the past. Especially when you deserved or asked for none of that pain.

Being the so called “bigger” person is hard when pain runs this deep.

Revenge is logical, even if it means creating a never ending cycle of hatred on both ends of the stick.

Relevant: 100+ Of The Greatest Naruto Quotes For Shounen Anime Fans

3. Pain is how you relate and understand each other 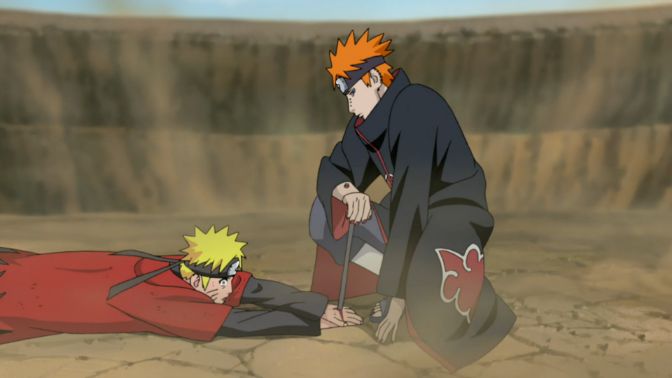 During the fight between Pain and , Pain (Nagato) points something out.

He tells (paraphrase) that the best way to understand each other is through pain.

And when you’ve been though the same or a similar pain as someone else, only then can you truly understand their feelings.

And until then you really have no right to judge, condemn or criticize someone you can’t empathise with. Or understand.

That’s the main point that can be taken from this episode where Nagato explains it. 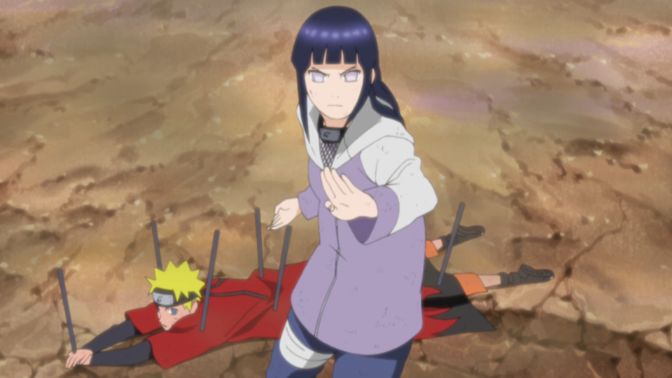 Before pointing it out he puts through “pain” by stabbing his hand with his weapon. So he can’t move.

Then when Hinata jumps in to save and fight by ‘s side, Nagato makes an example out of Hinata before illustrating a point about “pain”.

At some point he “stabs” Hinata and it looks as if she’s dead after Nagato says “this is exactly what happened when my mother died”.

By forcing to experience the pain of seemingly losing someone right before his eyes, in the same way Nagato did, in that moment understands his feelings.

It’s a brutal and savage way to make a point, but it doesn’t change the depth of what Nagato’s saying.

Pain is the greatest method of learning and understanding, and even relating to others.

There’s no method more than sharing someone’s pain to truly understand them as a person.

4. Sometimes doing the wrong thing is the right thing 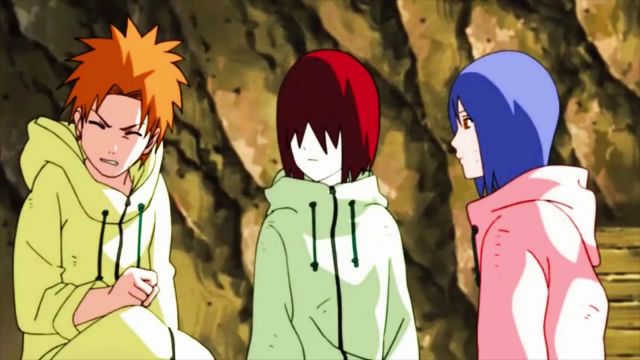 In the beginning of Nagato (and Konan, Yahiko’s) story, all 3 of them are alone in the world.

Or anything else a lot of people take for granted.

This puts them in the position of needing to steal food to survive long enough to see another day.

At first Nagato is against it when he’s by himself, but after joining up with Konan and Yahiko as kids, he see’s the necessity in stealing food to survive. 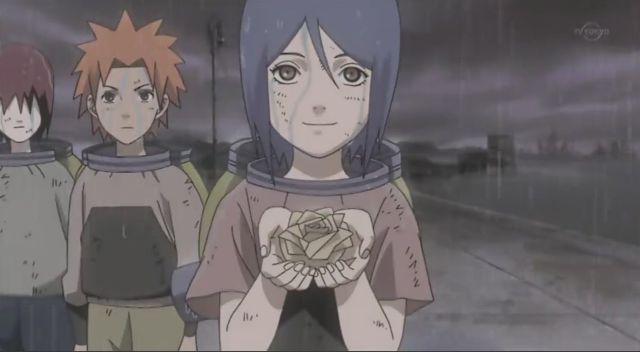 This is an extreme example but the life lesson applies to life in general.

Life isn’t always fair to everyone. And even then – life isn’t fair anyway.

Sometimes you’re forced into a position you had no control over, or born into a situation that pushes you to do what needs to be done.

Even if it’s classed as “wrong” by those who have the privilege to make that claim.

Relevant: These 17 Anime Characters Are So Lonely It’s Kind Of Depressing

5. It’s easy to manipulate people with a negative outlook 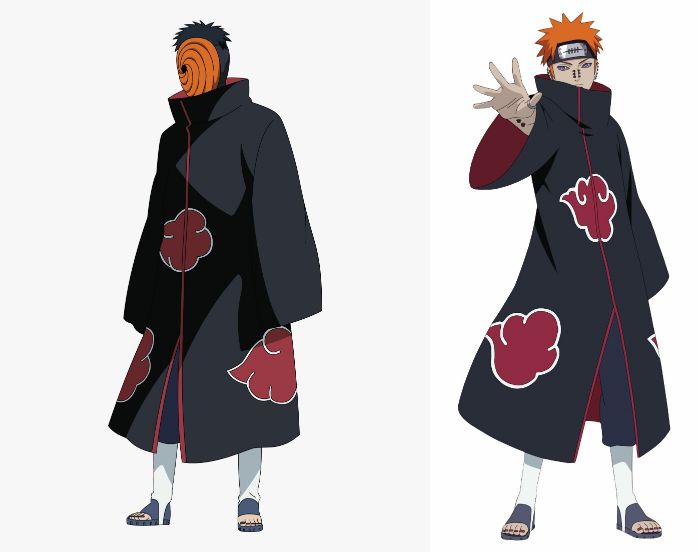 Madara Uchiha (or Tobi) is the man who convinced Nagato to start the Akatsuki. Konan was shocked when Madara told her this during their fight.

Nagato and the six paths of pain share one goal. And that goal is driven by hatred, agony, pain and vengeance.

It’s just a convenient (but savage) way for Nagato to deal with his own pain.

If he wasn’t so deep in the pit of hatred, and strangled by the negativity in his life, Tobi would not have convinced Nagato to start Akatsuki.

In fact – Tobi wouldn’t have even approached him. Tobi’s reasoning is to use Nagato for his own goals and purposes.

Nagato (Pain) is just a means to achieve that goal. 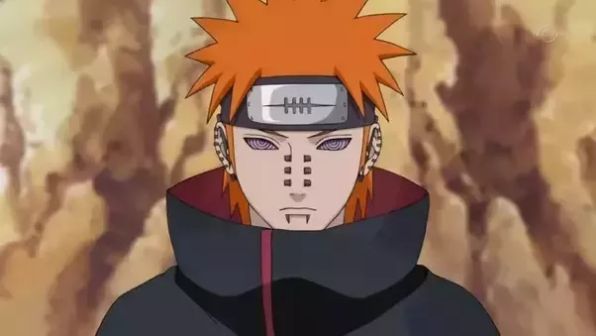 And from Nagato’s point of view, Akatsuki is the perfect way to inflict pain on the world. Control it. And justify his own pain by forcing the world under his rule.

Tobi knows this, and it’s the reason why Nagato was easy to manipulate. Especially with him being younger.

Lesson: when you’re at your worst, it’s easy to take advantage of your darkest desires.

52 Powerful Anime Quotes About Pain That Will Make You Think