Anime series where so many of the characters are memorable. Even if they’re side characters like Bisca or Lahar (if that’s how you spell his name).

One of the reasons why is because so many characters play an important part in the story.

Some of those roles are emotional, deep, inspirational and there’s a lot we can learn from it.

If you’re a fan of the series, you’ll appreciate these 5 Life lessons we can all learn from.

#1 – Fight for what you believe in

If there’s one theme running through , it’s that the main characters fight for what they believe in.

And they don’t let anybody stand in the way of their goals.

Whether that goal is a team effort as a guild, or a personal goal each person is trying to achieve.

Natsu Dragneel is one of the best examples of this. As well as Scarlet.

No matter how hard it is to accomplish the things they’re fighting for, they have complete belief and conviction in their goals.

And that’s really what it takes to make it a reality.

Sometimes we don’t believe in ourselves or what we’re doing enough. And that makes it so much more difficult to succeed.

#2 – Learn from your mistakes

Remember what scene the image above is from?

It’s when Laxus is disbanded from the Fairy Tail guild for causing so much trouble. And putting the lives of his guild mates in danger.

All because he was power-hungry and trying to prove a point. So Makarov disbands Laxus from the guild.

As the series progresses you start to see Laxus change little by little. And it’s plain to see by the time he re-joins the guild that he’s done plenty of thinking about his mistakes.

Eventually this makes him a more , level-headed and positive person. Even if he is a little rough around the edges.

We all make mistakes, but it’s learning from our mistakes that matters the most.

Otherwise we’ll just keep causing problems for ourselves and everybody around us. Even if it’s done unintentionally.

How easy is it to try to do everything yourself? And try to deal with all the problems you have by yourself instead of sharing it with others.

Especially the people who care about you and even have your back when you need them?

It’s easy to try to carry the world on our shoulders. But the thing is – we don’t have to. And it makes sense not to do it.

Two minds are always better than 1. And a team effort is always smarter than trying to handle everything by yourself.

#4 – Everybody has their own strengths and weaknesses. And that’s OK

Mirajane Strauss said it best when she mentioned the quote below in : 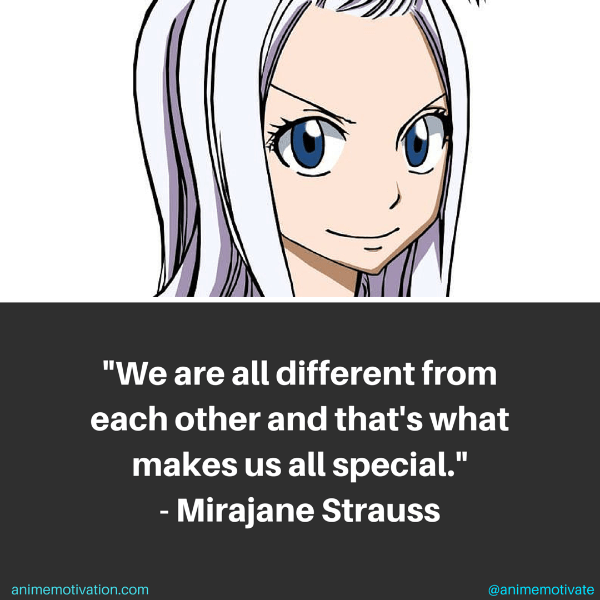 And that’s exactly the point! Nobody’s the same and we’re not meant to be. We’re different.

Take a look at the guild, they’re proof enough.

Erza might be the strongest when it comes to physical strength. But just like anyone they all have their own weaknesses too.

Heartfilia in comparison isn’t as strong in physical power, but she’s strong in other ways.

Like how she handles all the pains and struggles she dealt with when growing up.

Or how she’s able to put a smile on the faces of everyone around her.

Or how her gate keys are more useful in certain situations than others.

What’s important is knowing your strengths and focusing on that instead of comparing yourself and putting yourself down.

#5 – Sometimes giving up is the best option

Remember the fight between Gildarts and Dragneel on Tenrou Island?

It wasn’t much of a fight but once Gildarts got serious, froze in shock and couldn’t move.

He was afraid. And he knew from that moment he didn’t stand a chance of winning the fight.

When you first see that episode it’s mind blowing but there’s also a life lesson.

Not everything is worth fighting for.

Sometimes you have to know when to quit and when what you’re trying to accomplish isn’t going to work.

It’s a hard decision to make but it can make a big difference. Depending on what it is you’re actually giving up.

That can help you change as a person and improve for the better.

What life lessons has taught you?

17+ Of The Best Sci-fi Anime That Won’t Disappoint!

The Most Legendary Fairy Tail Quotes That Will Touch Your Heart