One thing I’ve said consistently over time is how anime is a massive scapegoat in the west.

A “deflection” by many who beat around the bush and probably want to say they don’t like the Japanese, but use backhanded methods to express those feelings.

With anime’s dominance in:

And more, there’s been a growing disdain and dislike for anime as a whole…. From the west. Which started around the 2000’s.

It does happen in places like India (the dislike for anime) but it’s not comparable to the UK, USA, and Australia.

Almost ALL controversies start in these 3 western countries. Yes, Australians are westerners. 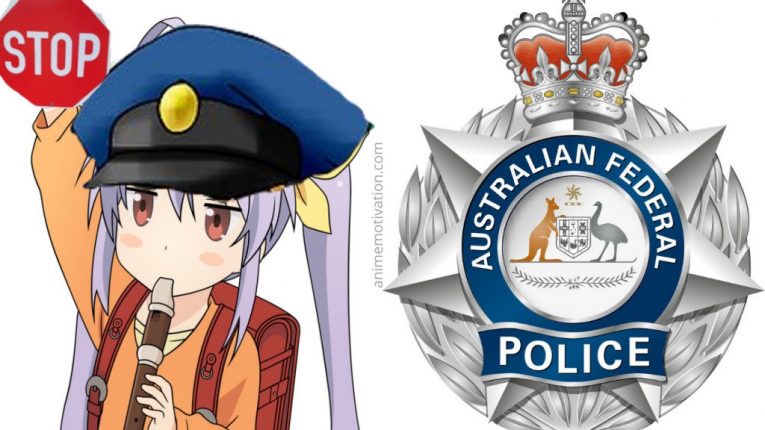 In Australia for example, anime is deemed “child exploitation”. This was an accusation made in 2017.

What kind of mental gymnastics does it take to come to that conclusion without real evidence?

Anime Is Deemed Lowest Level Of Child Exploitation, According To Australian Police

And some years back a so called BBC journalist claimed “manga promotes pedophilia”.

Her basis for this claim was from the anime Girls Und Panzer. Which is crazy if you understand what that anime is.

These accusations never go anywhere and only feeds into the propaganda from SOME people in the west. And those who use anime as a scapegoat to deflect from something else.

Sometimes something they themselves are hiding (skeletons in their closet).

Why anime is a scapegoat: 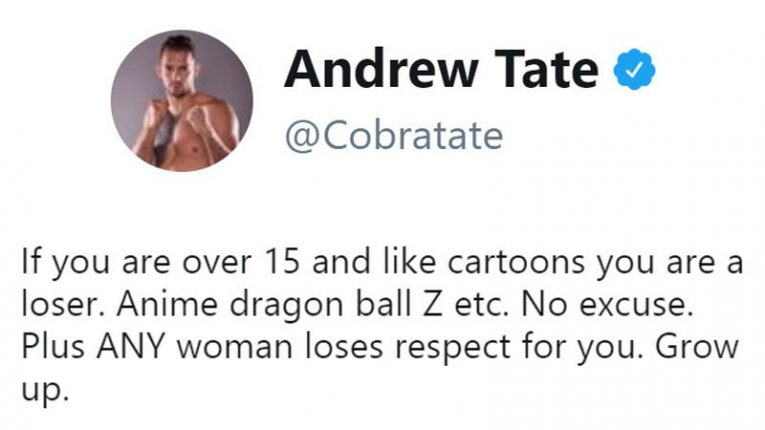 Anime seems to make its way into the mouths of MANY who are losers by definition. Or people who will use anime as a scapegoat when it’s unrelated.

Take the typical anime is for losers argument. It’s a straw man because it can easily be destroyed with facts that prove otherwise.

Take all the Mangaka, successful anime writers online, bloggers, artists and more. Are they losers because they like, watch, create, or enjoy anime?

As with any group or industry, there are definitely people who lean towards loser territory, but none of that is  specific to anime.

Anime is used as a scapegoat in this way because of its:

And of course – the fact it’s a foreign product that westerners, some of who are racist refuse to understand or contextualize.

Which is why attacking anime as a whole and anyone who’s into it is the method of assault (online especially).

When you have no argument, attack the person instead. The west knows this better than anyone.

There’s also the “anime is for pedophiles” rhetoric that’s been pushed for years at this point.

What does this even mean? And where did it come from?

The reality is its comes from nowhere other than the nut job minds of the loud minority who made it up.

It’s similar to how video were used, and are still used as a scapegoat to a degree. The whole “video cause violence” and shit like that.

So many years later after video have blown up there’s still no facts to prove the claims.

As usual these days as with a lot of industries, it’s more about propaganda and false accusations than it is about facts, logic, or common sense. 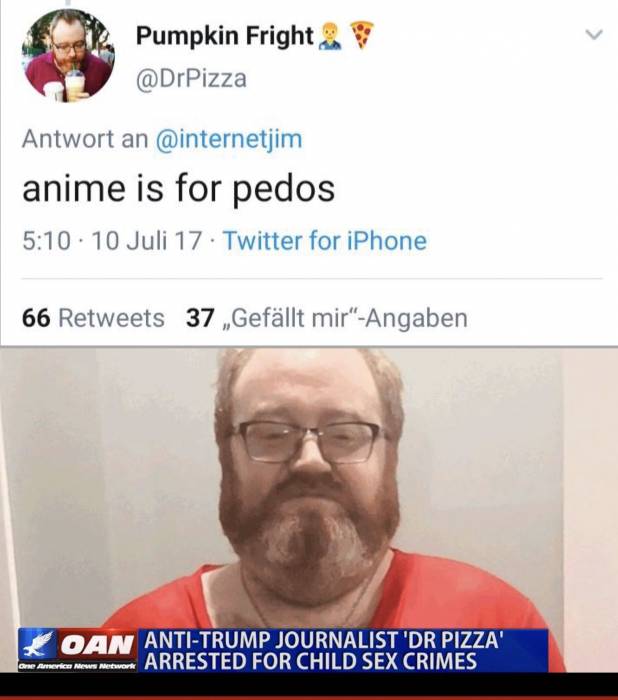 Let’s start with comments like this: “anime is for pedos”. It’s shocking how many of these fools have skeletons hiding in their closet.

DrPizza was arrested for Child Sex crimes sometime after he made the accusation about anime.

It’s almost as if going through the effort to demonize anime fans is a projection from their own sick urges. 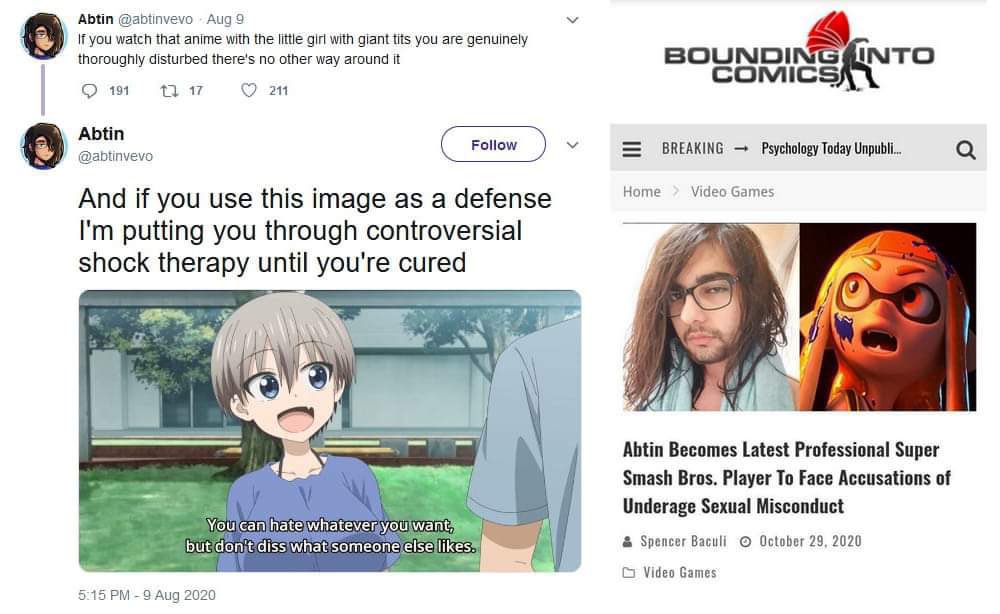 Then we have THIS situation with a Super Smash Bros influencer.

During the whole Uzaki Chan controversy people got into arguments in the 1000’s on Twitter. Many accusations were thrown around.

Abtin was virtue signaling so hard he forgot he was exactly the things he was accusing others for (because they like anime).

Only months later he was facing underage sexual misconduct. 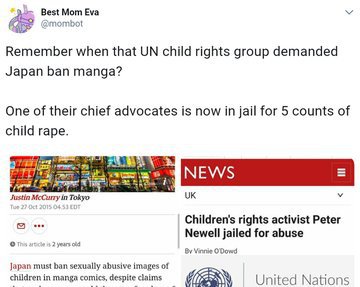 Next we move to the UN child’s right group that was trying to pressure Japan some years back.

They wanted Japan to ban with the usual, tired accusations filled to the brim with hyperbole and scapegoating.

Turns out Peter Newell, one of the child’s rights activist for the UN was jailed for ABUSE. Which is the same accusation used against for its “abusive images”.

It’s mental how common this scapegoating is.

In this case of irony, another person behind a Twitter account made an argument for lewd versions of anime characters.

Of course this point is more, we’ll say, “sensible” of sorts compared to others, but then comes the hypocrisy.

Turns out they were projecting and had a speech for their “sexual abuse” and related things they had to address.

Here we have a NEOGAF moderator, which is an EX political forum, who was criticising anime fans with the usual rhetoric.

Saying they just want to “look up the skirts of Loli’s” without being judged.

Projection strikes again. And it’s not over.

They questioned why. It’s understandably controversial.

But then in December 2021 a CNN producer was convicted of underage sex crimes.

If that’s not a case for projection, I don’t know what else is.

Way back in 2008 someone had THIS to say about:

And how it’ll be the new “video ” as far as scapegoating in the media.

“They’re going to blame anime and next. I know it. There’s already incident where and anime has already been blamed.

-like the boy been buried his head in the sand, they blamed Naruto.

-Deathnote has been blamed in several situation.

-One of the American person living in Italy was murdered, the suspect’s home has been found with several mangas.

Also, we already have enough anime haters on Youtube so one of them will become Jack Thompson’s successor when it comes to massacre chasers.

I can imagine it now in the future:

-Warren Jeff has been “training” on harem anime and . He was getting his training on these anime, he was learning to get to join him because of those anime.

-Lee Boyd Malvo was training on the anime, Golgo 13. All these anime had snipers training.

-the terrorist that did the attack in Mumbai, they were training on the anime, Gunslinger . That anime had a lot of images of tactical training and can teach you how to use guns and the terrorist did use little for this attack.

-Michael Vicks was getting his dog fighting skills from watching Pokemon, he even named his dog after a certain pokemon. It was said that Vicks was dressing up like Ash Ketchum.

This is a sample what it’ll look like. We already have enough anime haters on Youtube for one of them to carry the Jack Thompson’s torch.

Andrew Eisen and E.Zachary Knight, if you’re reading this comment. I predict anime and will exactly become the new “video game”. A Jack Thompson will be made for that also.

What I recommend to do is that you might want to talk ANN (anime haters and racist against Japanese to be a Jack Thompson clone/successor.

We must protect anime/manga!!! They are art just like video game!!! Haters have stoop to the level of jack thompson and will continue to do it!!!”

That prediction was right on the bullseye

While some of the comment was filled with sarcasm and tongue in cheek humor, the essence of what they said is on point.

Anime over 12+ years later has become:

And ultimately, anime has become a thing society refuses to accept despite the success, the numbers, the money, and the creativity it brings to the table of entertainment and animation.

It’s the perfect scapegoat for anyone who’s too pussy to say what they really feel about the Japanese, or those who have skeletons in their closet.

How long can they keep the charade up for though? Let’s wait and see 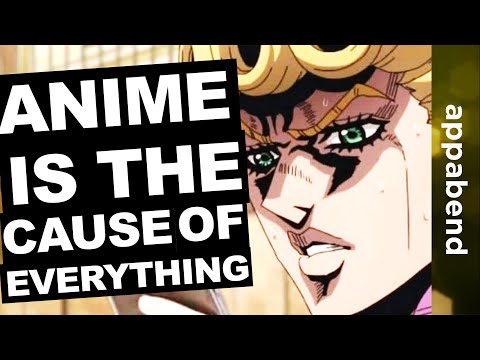 Gaslighting Anime Generalizations That Critics LOVE To Use

Fight for your justice in MY HERO ONE'S JUSTICE! The popular manga and anime series clashes head-to-head and Quirk-to-Quirk in this 3D arena fighter.