Anime is for losers.

You’ve heard that statement before. It’s common as f*ck if you’re into .

Trolls and haters on the internet never get tired of saying it when they’re acting no different by design.

The psychology of it is crazy, so I thought I’d do a post on it. And share some of the things people believe about fans.

This is not to highlight negativity or to give it “power”, but to start a discussion.

To highlight the irrationality behind people’s thinking, and how the world judges instead of trying to understand.

Why “Redditors” believe is for losers

“All the people I know who watch really suck at life. And they all complain about being “nice guys”. What a bunch of losers. They should just all grow up. A lot of them are fat too.

Parents shouldn’t let their kids watch for the sake of “being themselves”. F*ck that sh*t.”

“Most are unattractive or obese and live in this fantasyland for momentary bursts of dopamine. Most will not get off their butts, work out and attempt a shot at a normal life until it is too late.

And the good-looking ones you see in conventions? Obviously paid and are there to fulfil a contractual obligation, or something’s fundamentally wrong with them.” 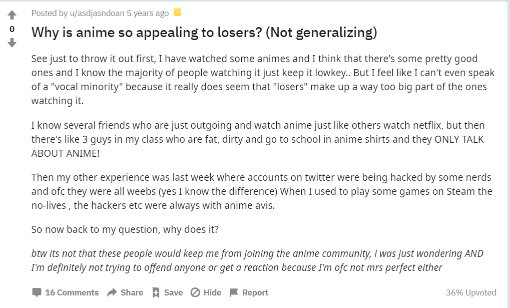 “See just to throw it out first, I have watched some animes and I think that there’s some pretty good ones and I know the majority of people watching it just keep it lowkey.. But I feel like I can’t even speak of a “vocal minority” because it really does seem that “losers” make up a way too big part of the ones watching it.

I know several friends who are just outgoing and watch just like others watch netflix, but then there’s like 3 guys in my class who are fat, dirty and go to school in shirts and they ONLY TALK ABOUT !

Then my other experience was last week where accounts on twitter were being hacked by some nerds and ofc they were all weebs (yes I know the difference) When I used to play some on Steam the no-lives , the hackers etc were always with avis.

So now back to my question, why does it?”

“At the end of the day I don’t care what you do but i find that the majority of people who like have been weird as f*ck.

Anyone i know on Facebook that likes was weird in high school. Couples that are into are generally weird.

I don’t know if it’s because all the human fans are hiding so they aren’t associated with these aliens but you guys are weird man.”

“Like I just don’t get how any self respecting human being could willingly expose themselves to that garbage.

It’s all just little girls in high-school and perverted stuff. Like who gives a f*ck about a bunch of girls starting a band or some sh*t. And every action has like the same plot, there’s this guy who’s a loser and he has some sort of special ability no one else has but he sucks until he masters it, which he does halfway through the show then becomes over-powered. Same sh*t every time.

Related: Why You Have NO Reason To Be Ashamed Of Liking Anime

Good responses to these accusations

“That’s definitely a big generalization of a fan base of a form of media. It sounds like you only judge off of the cringe subs on reddit or just the internet in general.

That and you basically just called a lot of east Asia a bunch of losers because they happen to watch cartoons that they make.”

I have a stable middle-class job, bathe daily, and wear clean clothes each day. I have many friends (of all walks of life) and I’m generally well-liked at work by my co-workers. I work out multiple times a week.

However, unless I say something I don’t think anyone would guess that I am particularly interested in . I don’t think any of my co-workers are really aware that I like except for one guy who is also a big closet weeb.

My point is that there are probably lots of normal people who hide their interest due to the social stigma, so the only ones you see talk about it in public are those who are already ostracized and have nothing to lose by being open about their hobbies.

Toonami did America both a great favor and disservice simultaneously. It introduced a lot of people to the medium, but also created a stereotype by showing almost exclusively shounen.”

“I think it’s more bias because it’s the ones you know about, since they kinda “exemplify” the fact they watch . I would bet there is a lot of people you know that watch but you have no idea that they do.”

Breaking down the “anime is for losers” mindset

“Losers” can be found anywhere, in any group, culture, or fandom. Online or otherwise.

There’s no correlation as far as and being a supposed loser at life.

The irony of most of these incoherent arguments is the person criticizing can be considered a loser by the fact they’re trying to belittle others to put themselves on a pedestal.

Not to mention these critics are mysterious and you usually have no idea about who they are, how they live their life, or “what” their life looks like.

What do you think about it?

The Difference Between An Anime Enthusiast, Otaku And A Weeaboo

Why Anime Is Bad For You, According To The Internet