Anime’s popularity rose from the 1990’s worldwide. And that’s where the gaslighting began.

Some generalizations lead to bullying for some fans who enjoy the medium. While others who grew up with the internet experienced it there (trolling, etc).

This stretches to online platforms and websites who occasionally point the finger at (or its fans) with hyperbolic arguments, and grandstanding nonsense.

It continues to this day and now some semi-mainstream media outlets are getting in on the gaslighting action. Not to mention Twitter, the big mouth of the internet.

Why is generalized so much? 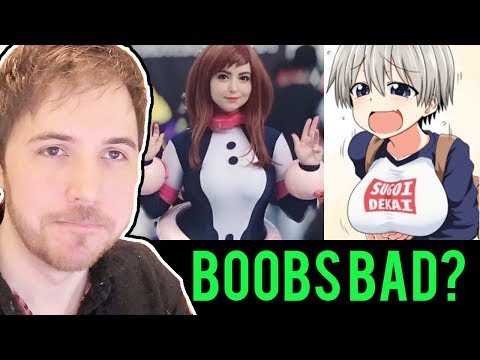 has become an easy target because of its:

And even admiration worldwide from millions of fans. Many who cosplay, draw , talk about it, make businesses out of it, or wear the merch.

It’s also from JAPAN. This is maybe the biggest reason for ‘s hatred.

Since we’ll say 2013-2015, the west has been hardcore about its toxic cancel culture, shaming culture, and trying to force others to pander to their own ideologies.

It’s caused platforms like Disney, or just regular celebrities or musicians to “apologize” or pander to avoid backlash and controversy.

Anime is Japanese, so no amount of crying or generalizations can change anything.

It’s not a western product so no one can dictate how it should be run or done. This is why the generalizations continue, and why people can’t stand it.

This is especially true for Feminists, social justice warriors, or anyone who wants the world to pander to their viewpoints instead of accepting viewpoints that differ from their own.

This one has to be the most COMMON generalization and accusation in the industry. It comes from people with a twisted definition of what sexism (or being sexist) is supposed to be.

When I say “people” I’m talking about people in the USA, UK, or in the case of politicians, Australia.

Let’s start with a question: what is sexism? How do you define something that’s sexist?

“suggesting that the members of one sex are less able, intelligent, etc. than the members of the other sex, or referring to that sex’s bodies, behaviour, or feelings in a negative way.”’

That’s what sexism is.

Not enough? Here’s another way of putting it:

“Discriminating against one gender and having double standards for the other.”

Now we’ve got that out of the way, let’s talk about why the generalization of being sexist is nonsense. 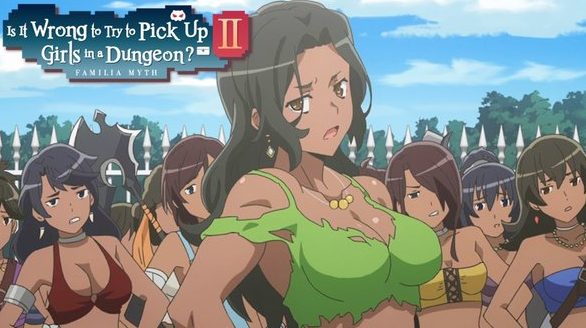 Let’s focus on these gorgeous brown babes for a hot sec. They’re from the series Danmachi.

Here’s my question: does being sexual make something sexist?

I’ll ask it a different way: does a woman being sexual imply sexism if a man finds her sexy?

The answer is obviously NO. Being sexual is not the same as being sexualized, which in itself isn’t sexist until a double standard exists (or otherwise).

In the era of people having a lack of comprehension skills, it’s no wonder people can’t distinguish between sexual, sexualized, and sexist.

just happens to be a scapegoat. 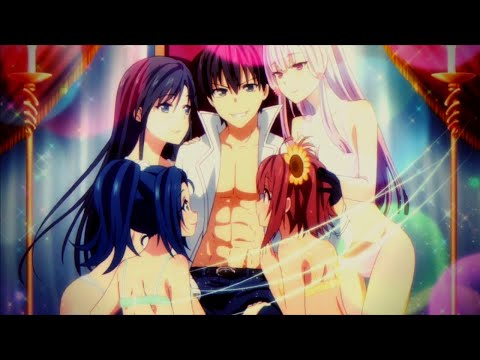 While we’re on the topic of “is sexist” let’s jump into fan service.

Why is this relevant? Because many of the hyperbolic arguments relating to imply fan service is somehow inherently sexist.

What this translates to from political speak is “This goes against my views so I’m gonna shame you until you fix it to my liking”.

Remember what I said earlier? Sexual isn’t sexualization, and even then – sexualization isn’t sexist. It serves its purpose when the context is relevant.

Another thing I wanna point out is being attractive isn’t fan service, neither is it sexist just because you want to be politically correct.

Sally (above) from Peach Boy Riverside has big tiddies just like women in the real world. What’s so offensive or sexist about that?

It’s not. And it’s certainly not fan service and besides, even when it is there’s no correlation.

Sexism is a word that’s weaponized and misused too often these days when people can’t refute something without jumping to extremes to make a point. 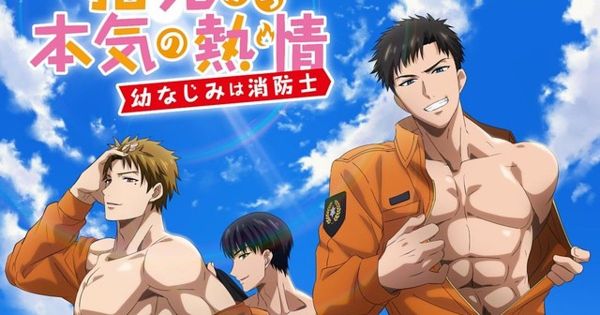 The same critics (female especially) who throw around the sexist term so much, are usually the ones salivating over ripped boys and men in .

If it’s not boys in general, it’s YAOI characters they’re salivating and outwardly simping over. Many of who even say it proudly across social media.

It’s only a big issue when the shoes on the other foot, showing for the large part that this is about privilege, not genuine concerns or so called equality.

This argument and generalization is even more insane than the last. You still have people in 2021 saying isn’t art on the basis of feelings.

So what’s the definition of art? In simple terms, a drawing or depiction. A form of self expression.

It doesn’t have to be good to be considered art, and being bad which can be subjective doesn’t take away from the fact that something is fundamentally artistic.

Denying what your eyes can see doesn’t mean it ain’t there.

Just look at it. That’s an artistic expression someone came up with. The character is Ai Ohto from Wonder Egg Priority.

From her eyes, her facial expressions, to the she wears, hair, mouth movements, and overall design….

Everything about it is fundamentally artistic. It’s creative expression. And to deny its artistic relevance is to deny the air you’re breathing.

Pretending it isn’t there doesn’t change that it is.

People who don’t like or “approve” of certain things are the ones who always try flipping or changing the definition to fit their narrative. Or dissociating that thing from what it is just because they feel it’s beneath them.

Anime is just a result of that. Just as Hip Hop experienced the same thing in the 1990’s because of the power and influence it was gaining.

is still going through that phase.

Related: The Surprising Similarities Between Hip Hop And The Anime Industry

Actually, as you can see with Heartfilia’s image, anime body proportions are indeed realistic.

This is just yet another shaming and deflection tactic used by critics who:

Or they have no real argument to speak of.

Walking around any city in the west will show you how realistic female (or even male) bodies are in .

It’s not hard to see. 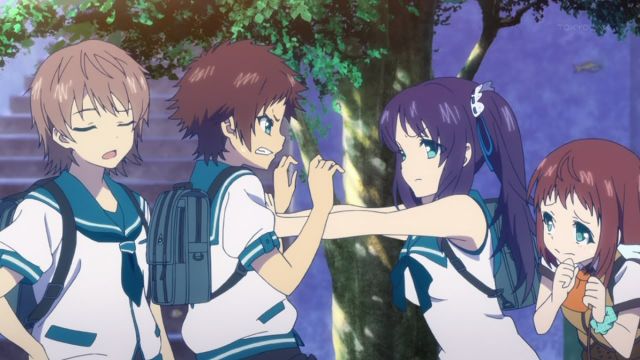 Take these school characters in Nagi No Asukara as an example. Aren’t they not realistic by body design?

I mean is it REALLY that different, animation and colors aside?

Take a look for yourself. What’s unrealistic about their body proportions, really?

If you judge it from a Japanese perspective, this becomes even more true. And if you focus on the characters who are foreign (African, western, etc) it still remains realistic.

The fact that has caught on and the art and designs are being shared everywhere is the real perceived threat. That’s why this fallacy of an argument is brought up so much.

Relevant: Anime Body Diversity, And How Its Evolved Over The Years

When the Nagatoro series aired back in early 2021, these were the insane Tweets that started flooding the platform.

People were implying the is for pedos, which was blatant by the BAIT tweets they were dishing out.

All this from an announcement for Nagatoro. It’s like they have these accounts bookmarked so they can b*tch about it.

Countless times this argument is being brought up. If it’s not calling pedos, it’s claiming it promotes and supports pedophilia. Which is some nasty sh*t.

Not only that, but it’s callous, and irresponsible to use those terms so flippantly and casually.

BBC made the claim in the image above a few years back. What was shocking is the journalist has some level of influence, and yet they’re saying things they can’t prove with even a shred of evidence.

It’s simply the shaming tactic where you insult someone (a Japanese man working in the industry in this case) because you’re not fond of . Or don’t understand the culture.

It’s those who lack understanding who are the most judgmental after all. It amazes me.

The answer is NO if you’re talking about and as a whole, which is painting it all with the same brush.

That’s always a disingenuous standpoint (It’s like saying all women are b*tches).

Like many things in media, you CAN find sexism, even racism within that piece of media (anime).

Finding a dozen or less problematic pieces of media and making all of it out to be the same way is lazy thinking, jumping to conclusions, and hyperbolic.

One thing we need to stop doing collectively (more in the west) is pretending the word sexist only applies to women, which is a sexist double standard talking point. 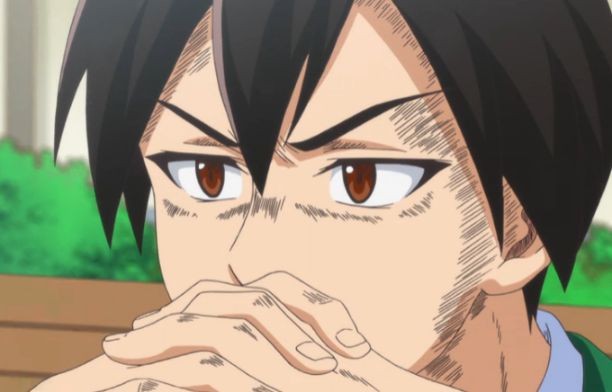 Ultimately what’s happening is people in the west, especially those who’ve been coddled (not their fault) don’t know how to respect differences in opinions or tastes.

Because of this, when they see a foreign thing like , especially since they can’t control the narrative, it drives some people into shaming others as justification.

Entitlement does that to a person. You think the world shines out your you know what, and will do anything to make others conform to your thinking (cancel culture).

On the other hand, coddling has made men and women insecure in the west, and it shows from the fact they find things to be offended about (like that does no harm).

That’s what privilege does to a person. This is why generalizations exist, and why fake outrage is prevalent when it comes to .

Its lost a lot of steam since the pandemic started, and It should continue to die down as time goes by if you ask me.

Turning off the thing you don’t like isn’t what people do anymore. It’s complain and shame instead, so this is the end result.

Is Anime Fatphobic? Let’s Break It Down