With episode 21 just being released and the events of the bloody Halloween arc hitting it’s climax, this show has gained just as much hate as love.

Ken Wakui has used his experience from his past to craft a world of characters that it made me remember why I fell in love with all those years ago.

The Reception Of Tokyo Revengers 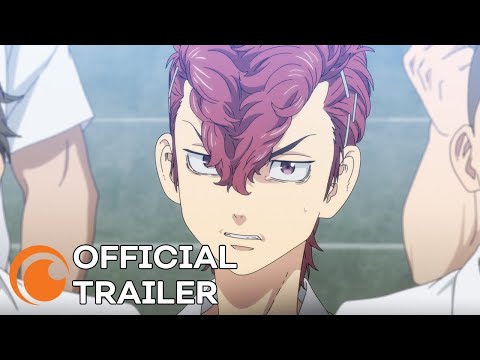 Season 1 of the has had mixed reviews so far for nearly every reason you can think of.

It has received its fair share of grief from people worldwide and I struggle to see why in my own opinion.

The first 20 episodes cover around 40-50 chapters of its ongoing 220. Some people think this is just cool fights and characters with a good dress sense. They’re being impatient.

As someone who’s eagerly awaiting chapter 221, I can say there’s more to it than that, including more than gore and violence.

It’s all a game of chess.

I think season 2 is going to continue from the main character stopping the events of Bloody Halloween and thinking he saved the timeline once more.

He’ll then return to see one of the worst he has seen yet. Then more characters with unknown motives will start to appear.

This will be a season to show that this is not just a brawler . It’s a well thought out and extremely piece of work.

I struggle to see where the hate comes from but people will always have opposing opinions, especially in the world of . 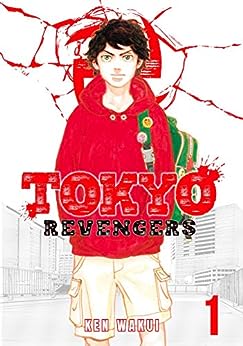 Tokyo Revengers Vol. 1 Start Shopping
We earn a commission from Amazon & other affiliates if you make a purchase at no additional cost to you.

As for the itself, well I will tell you a story about me for that.

As a person now in their mid 20s I still remember watching shows like Yu-Gi-Oh and Pokemon after school. Becoming a teenager and discovering , Bleach and my favourite ever: Angel Beats!

But I got tired of watching only that so I bought a classic. The first 2 chapters of the original Dragon Ball series.

The art style was so amazing that I started looking up and other shonen like Near my late teens though I just fell out of love with everything.

Over the last few years I have been brought back by certain shows and that drew my eye like and Black Clover.

When I first looked at Tokyo Revengers I fell so in love with the medium once more and I’m happy that the adaptation brought my love back even more.

If you feel like your love for the medium is dying then I’d highly recommend it with it’s final arc now in release.

It’s something that I will hold in high regard going forward and overall a solid 9/10 and maybe a perfect score if it nails its landing. 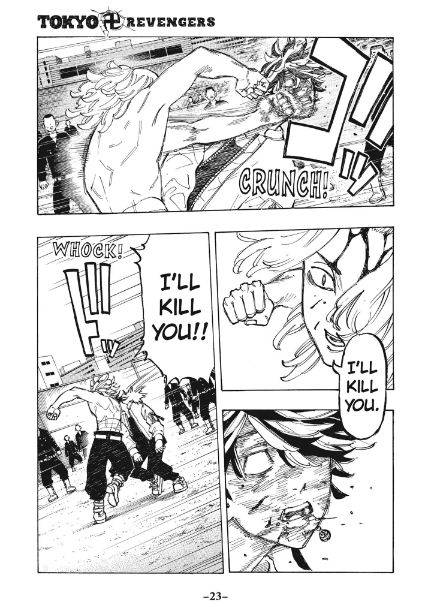 This is the chapter that will be episode 21 of the that everybody is waiting for. The last arc of ‘Bloody Halloween’ with Baji now dead in Chifuyu’s arms.

Mikey loses it and beats Kazutora to death. It looks the future Takemich envisioned is steam rolling into existence while he starts to believe he failed again.

Not this time though. He runs in between Mikey who quickly proceeds to be very unlike himself, beating Takemichi with no emotion in his eyes.

Takemichi pleads with him that this is,

Mikey quickly responds telling him to not speak Baji’s name. That is until one of the most moments in the was amplified by the ’s rendition of Takemichi’s words as he lay on the floor crying.

stuff from the crybaby hero.

He continues to explain why Baji did what he did to stop all this but in the ruckus, shows the charm he found at the Toman meeting and Mikey notices.

He completely ignoring Takemichi at this point until he looks at the photo inside.

That’s all I will say on this chapter but damn… This is the episode I was waiting for. Everything comes together so well.

The struggle from the main captains of the gang that up to this point had been shown to be badass, to a point where it felt kind of like a low powered shonen.

Mikey really gets good character development during the next few episodes that really start to shape the end arc really well. 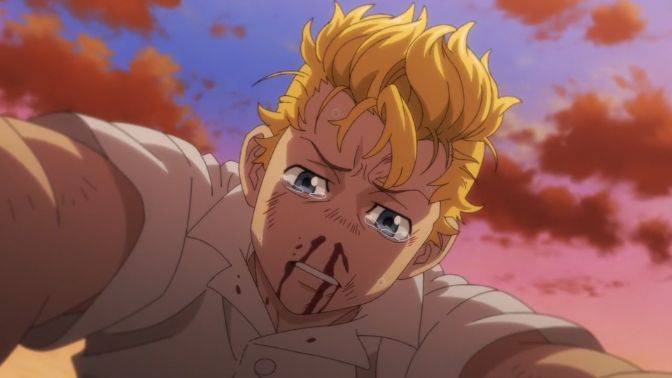 Takemichi is… For less of a better word. a very annoying yet weirdly relatable character. A 26 year old nerdy guy, living in his mess and just trying to get through the day when the story starts.

The opening scene in both the and is a great introduction to the character he is going to be.

At the start he is wimpish, childish and a bit of a crybaby.

Something I think we can all agree with being this way in our younger years. However he has something that makes the relatability grab you even more.

He has a drive that shows you what somebody like you could have done in another life. Granted yes it’s an so it wouldn’t be nowhere near as cool but it’s an interesting concept that follows a classic formula.

Protagonist starts weak and thinks he can’t do it. Meets a group that encourages him that he can and finally learns that they can indeed stand on their own two feet.

In short, I can’t say if I really like him as a protagonist but I can say without a shadow of a doubt that I do not dislike him.

This is something people can easily say about based in Tokyu,

‘’It’s not hard to buid a pre-existing world!’’

That is true but in a way it is also wrong. Tokyo Revengers does not really work on many important sites in the show except for one that I will mention amongst more, Shinchiro’s bike shop.

I will only speak of the main scene from the at this point but I will say now that this place is a constant for backstories.

It really makes Shinchiro feel more like a character that makes us feel like Mikey. It has you thinking damn he must have been so cool…

But the scene. Kazutora being so unstable makes perfect sense now right? It was a truly gut turning sequence that really almost had me in tears.

I know not much was said about the actual events that take place in this show but that is so you can find out more for yourself and make your own opinion on the matter.

It brought back my second love behind writing to me so maybe it will make your love grow, too.

20+ Of The Best Shounen Anime

Jacob Fenwick is a British born writer in his mid 20s living in Wales that has always wanted to combine his love of fantasy novels and manga/anime greats. Jacob is a mental health carer that loves to spend his free time reading/writing or watching something. Jacob has released one dark fantasy book on Amazon called False Heroes: A Dystopian Odyssey Begins’ along with his writing partner, John Crockett.