I remember back in 2020 when there was outrage related to Ahegao face. And many claimed it was racist to Asians.

I won’t lie, I’ve seen so much outrage over nonsense on Twitter I dismissed it, thinking it was exaggerated.

The problem was (at first) is no one was explaining why it was racist. And Twitter’s out of context as it is so it didn’t help.

I’ve seen people fabricate stories for attention as well, like when I first covered a suicide in the RWBY community. Only to later find out it was a HOAX.

Anyway, fast forward to 2021 and the ahegao conversation is still going. And I have a better understanding of why Ahegao is racist.

The history of ahegao face 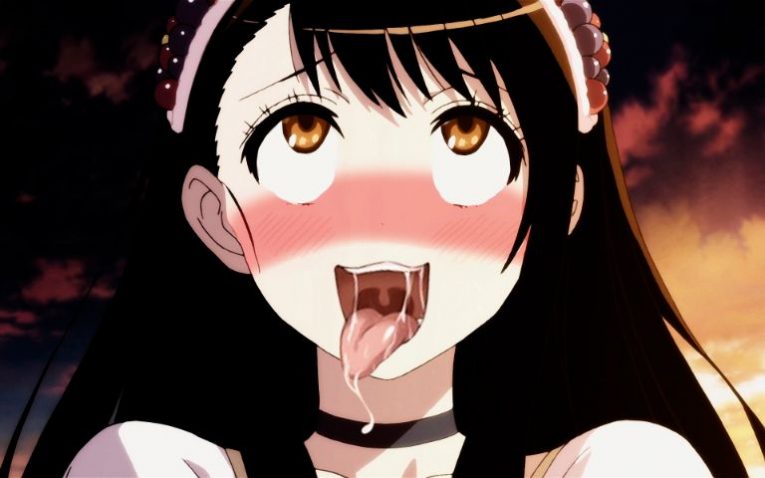 This is the ahegao face we know of today. It seems like a meme, a joke, a bit of comedy, whatever.

I thought the same when I first heard of it. And while it might have seemingly evolved into something different today, the root doesn’t change.

This is actually not the full story at all 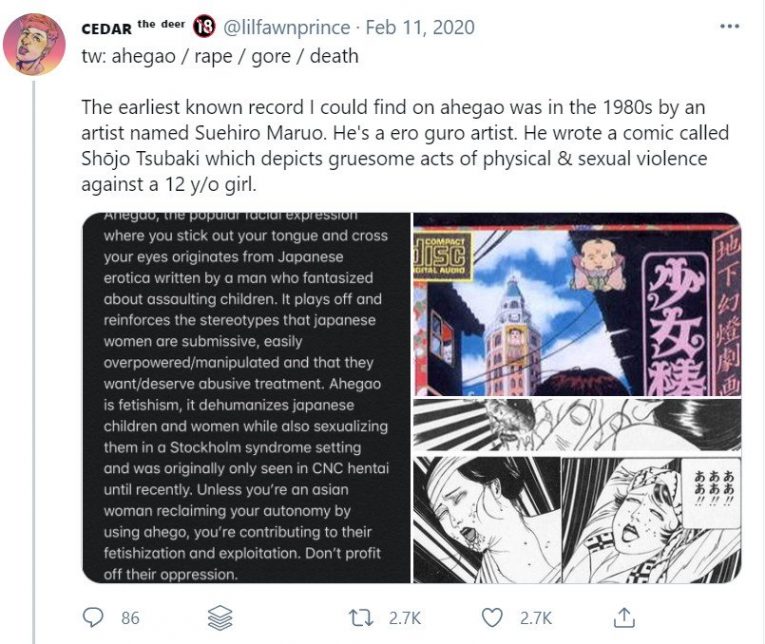 “The earliest known record I could find on ahegao was in the 1980s by an artist named Suehiro Maruo. He’s a ero guro artist.

He wrote a comic called Shōjo Tsubaki which depicts gruesome acts of physical & sexual violence against a 12 y/o girl.” 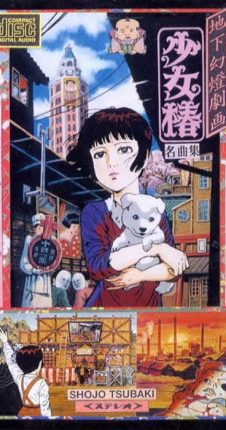 Even though Wikipedia hasn’t explained the full history, it DOES show the comic.

“An innocent 12-year-old girl who enjoyed her life as a student to the fullest. However, everything changed after her father left and her mother died. Midori is forced to become a school dropout and sell flowers in the city. The orphaned Midori then meets a stranger who leads her towards the circus. What awaits her will change her life, and her, forever.”

A breakdown of ahegao’s history 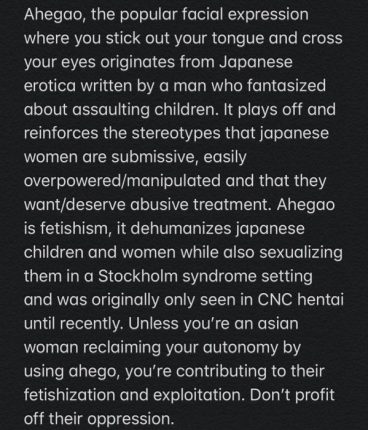 “Ahegao, the popular facial expression when you stick out your tongue and cross your eyes, originates from Japanese erotica written by a man who fantasized about assaulting children. It plays off and reinforces the stereotypes that Japanese women are submissive, easily overpowered/manipulated, and that they want/deserve abusive treatment.”

It goes on to talk about how Ahegao is Japanese fetishization, which I talked about the other week.

That fetishization has obviously extended and is now done by American white men, and white westerners in particular.

The image is taken from anonymous East Asian women, so it can’t verified in a literal sense.

Anecdotal evidence of why Ahegao can be racist 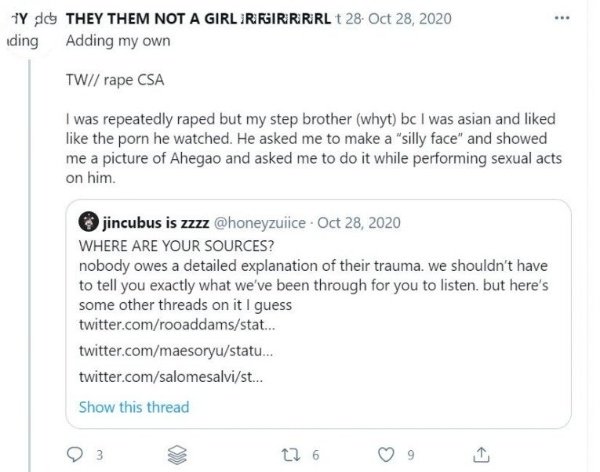 I’ve also been bullied and harassed by men for not wanting to fulfill their waifu dreams and do Ahegao while having sexual relations with them. Some even got angry and threatened me.” 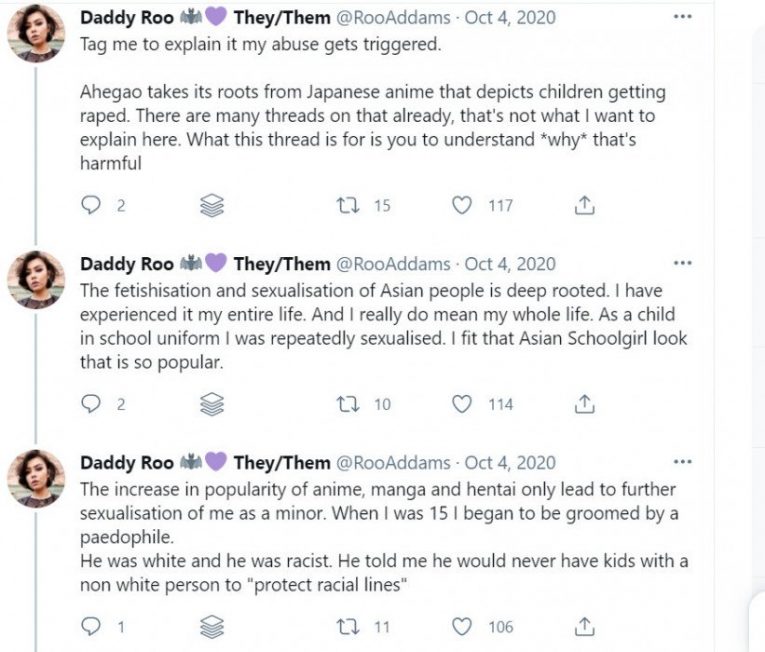 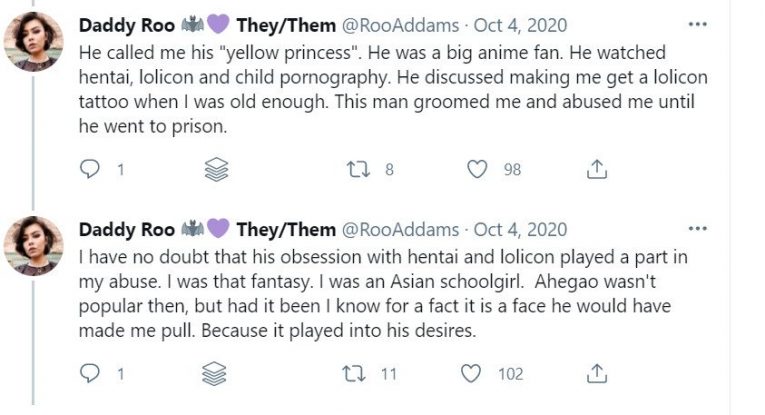 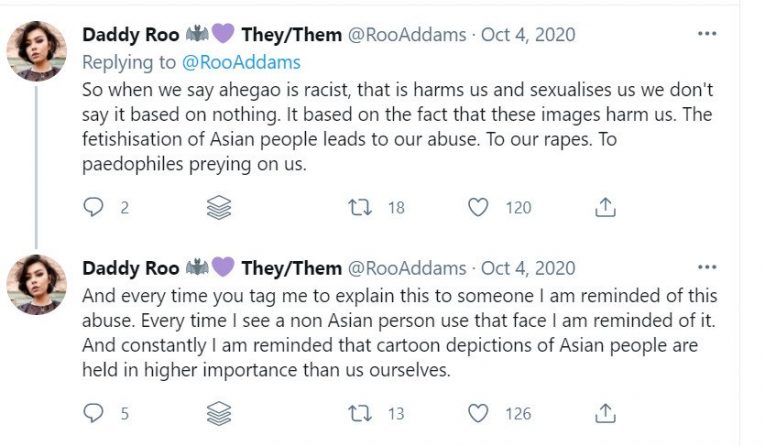 “The fetishisation and sexualisation of Asian people is deep rooted. I have experienced it my entire life. And I really do mean my whole life. As a child in school uniform I was repeatedly sexualised. I fit that Asian Schoolgirl look that is so popular.

The increase in popularity of anime, and only lead to further sexualisation of me as a minor. When I was 15 I began to be groomed by a paedophile. He was white and he was racist. He told me he would never have kids with a non white person to “protect racial lines.

He called me his “yellow princess”. He was a big anime fan. He watched , lolicon and child pornography. He discussed making me get a lolicon tattoo when I was old enough. This man groomed me and abused me until he went to prison.

I have no doubt that his obsession with and lolicon played a part in my abuse. I was that fantasy. I was an Asian schoolgirl. Ahegao wasn’t popular then, but had it been I know for a fact it is a face he would have made me pull. Because it played into his desires.

So when we say ahegao is racist, that is harms us and sexualises us we don’t say it based on nothing. It based on the fact that these images harm us. The fetishisation of Asian people leads to our abuse. To our rapes. To paedophiles preying on us.” 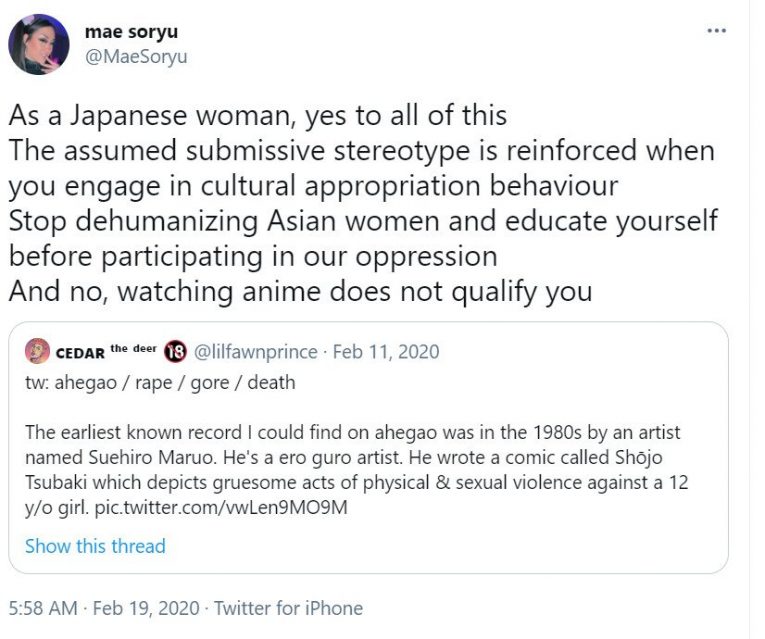 “As a Japanese woman, yes to all of this. The assumed submissive stereotype is reinforced when you engage in cultural appropriation behaviour. Stop dehumanizing Asian women and educate yourself before participating in our oppression. And no, watching anime does not qualify you.”

In light of #stopracismagainstasians, the conversation is still going 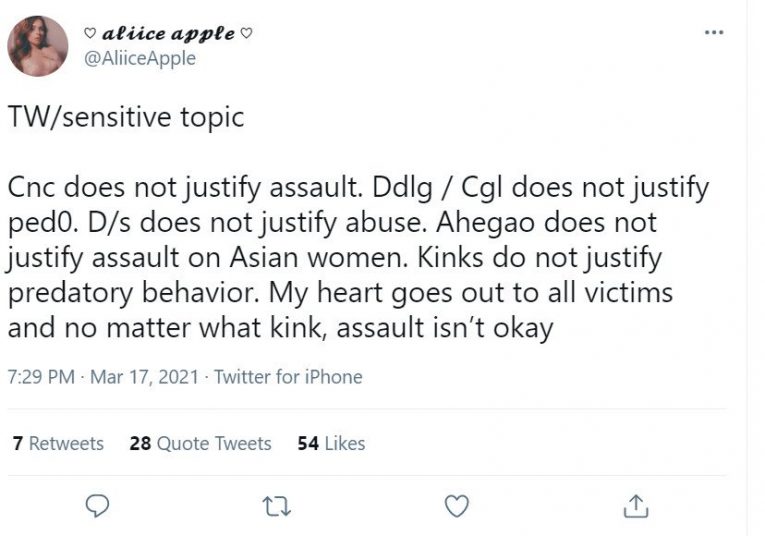 A woman with an “Only fans” page spoke about Ahegao and its implications.

A lot of the people who responded to the Tweet and shared why it’s racist… were blocked by this woman, ironically.

She even blocked the same woman who mentioned her traumatic story of being r*ped because of Ahegao and stereotypes it portrays.

Ahegao face in the context of racist fetishization

There’s so little information on this that it makes the conversation weaker than it should be.

Hardly anyone (in the East Asian community, especially Japan) is speaking out in mass numbers. But that’s normal because racism, fetishization, and stereotypes are kept in the dark.

People who deal with it don’t wanna feel like they’re complaining or they just think nobody gives a sh*t so why bother talking about it.

I see racism so often in the anime community. I’ve been on the receiving end and it happened this morning actually.

I’d say that may play into how few voices are saying anything about it.

What do you think? Is it legit?

Black Artist Draws Herself As Anime Girl, Gets RACIST Abuse And Is Told To “Stay Silent”