Yashahime: Princess Half Demon is a continuation of the series after so long.

The focuses on the daughters and kids of Kagome, , and Sesshomaru.

As expected, the has churned out some relevant quotes we can relate to, learn from, or simply understand the character’s point of view.

Here’s the best lines from the . 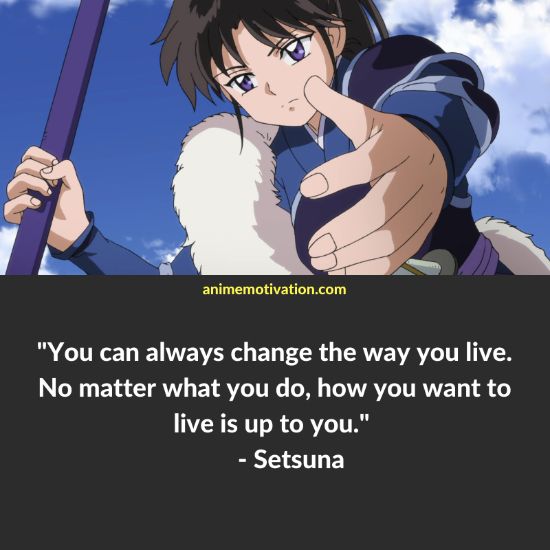 “You can always change the way you live. No matter what you do, how you want to live is up to you.” – Setsuna 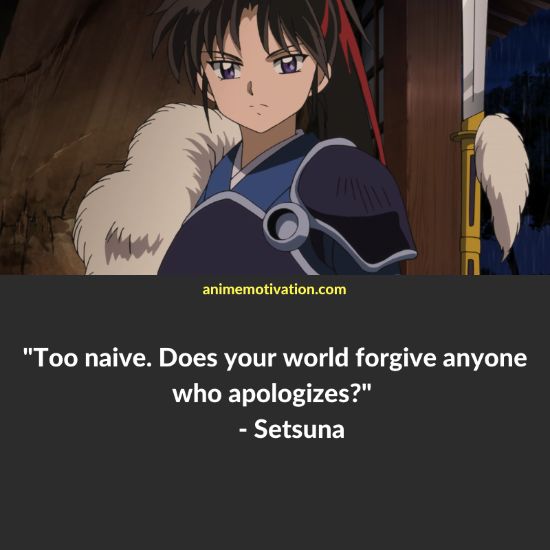 “Too naive. Does your world forgive anyone who apologizes?” – Setsuna 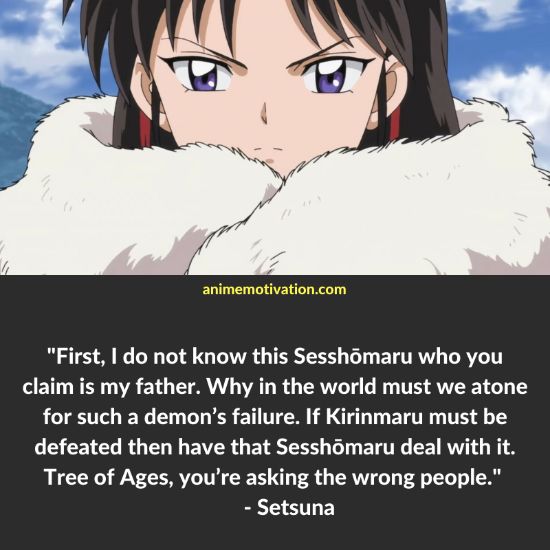 “First, I do not know this Sesshōmaru who you claim is my father. Why in the world must we atone for such a demon’s failure. If Kirinmaru must be defeated then have that Sesshōmaru deal with it. Tree of Ages, you’re asking the wrong people.” – Setsuna 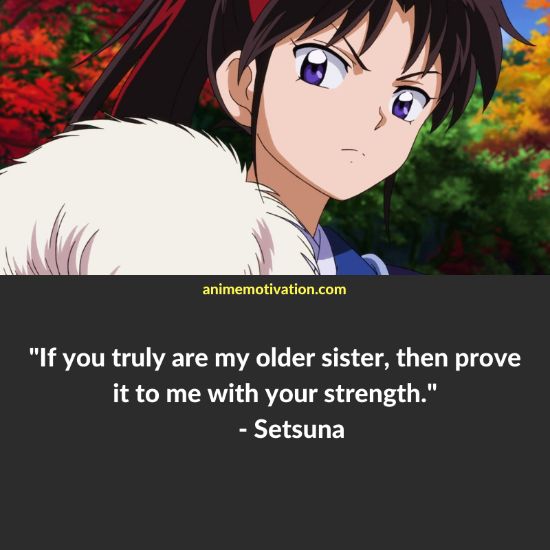 “If you truly are my older sister, then prove it to me with your strength.” – Setsuna 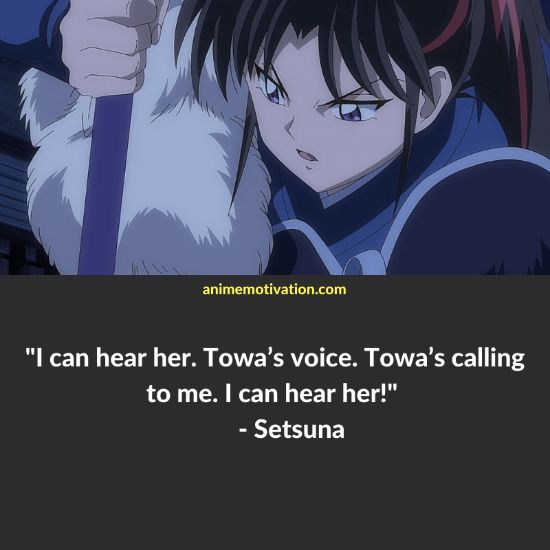 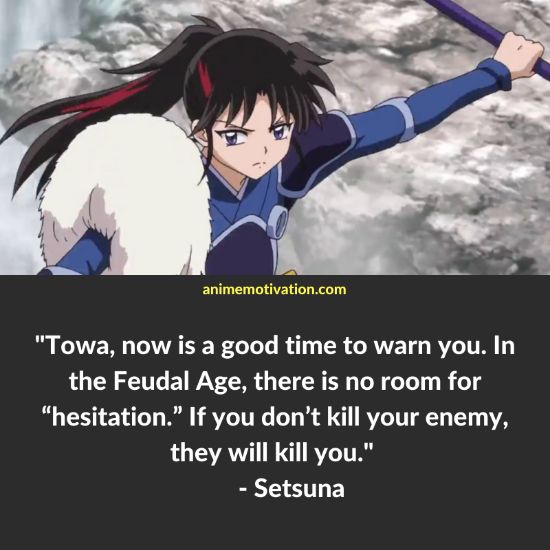 “Towa, now is a good time to warn you. In the Feudal Age, there is no room for “hesitation.” If you don’t kill your enemy, they will kill you.” – Setsuna 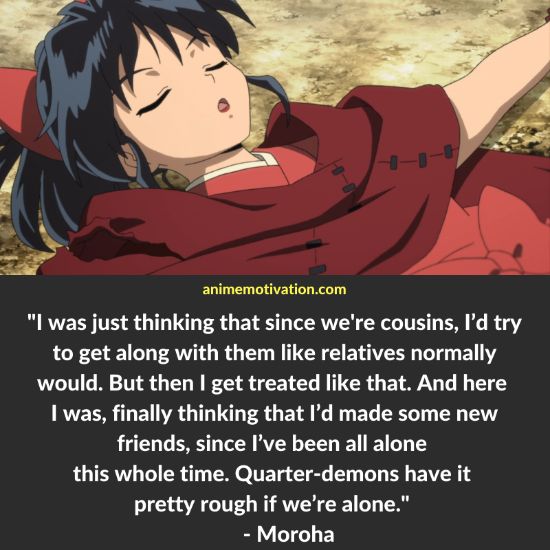 “I was just thinking that since we’re cousins, I’d try to get along with them like relatives normally would. But then I get treated like that. And here I was, finally thinking that I’d made some new friends, since I’ve been all alone this whole time. Quarter-demons have it pretty rough if we’re alone.” – Moroha 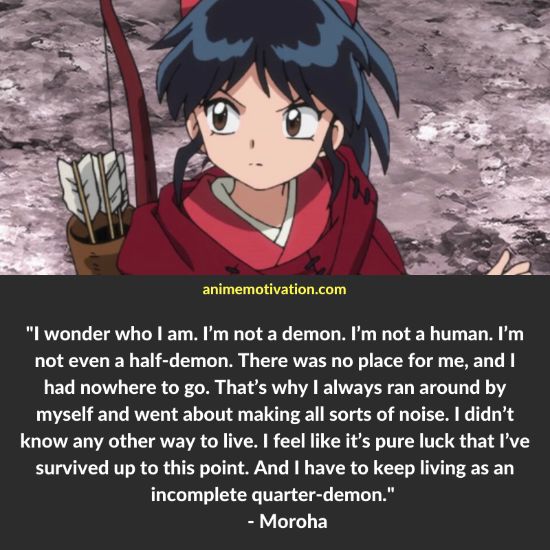 “I wonder who I am. I’m not a demon. I’m not a human. I’m not even a half-demon. There was no place for me, and I had nowhere to go. That’s why I always ran around by myself and went about making all sorts of noise. I didn’t know any other way to live. I feel like it’s pure luck that I’ve survived up to this point. And I have to keep living as an incomplete quarter-demon.” – Moroha 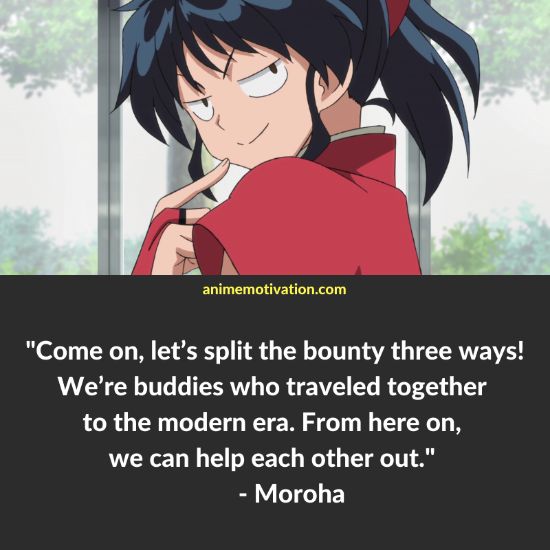 “Come on, let’s split the bounty three ways! We’re buddies who traveled together to the modern era. From here on, we can help each other out.” – Moroha 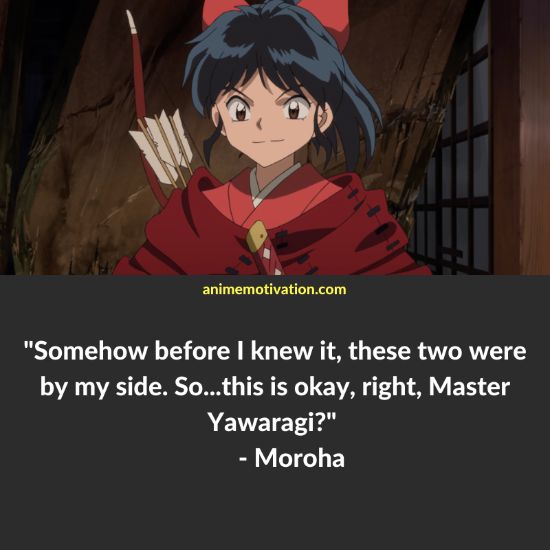 “Somehow before I knew it, these two were by my side. So…this is okay, right, Master Yawaragi?” – Moroha 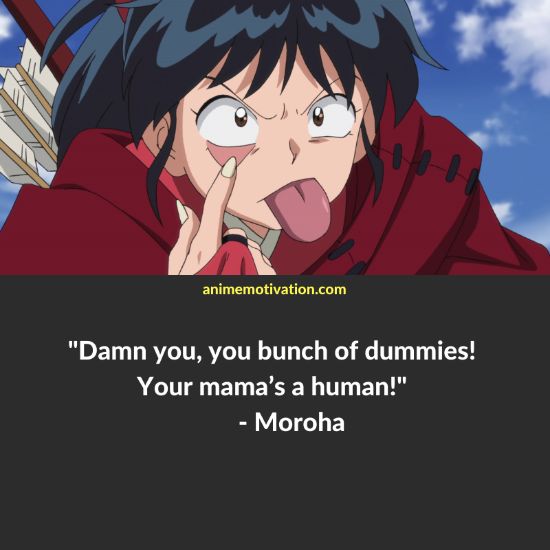 “Damn you, you bunch of dummies! Your mama’s a human!” – Moroha 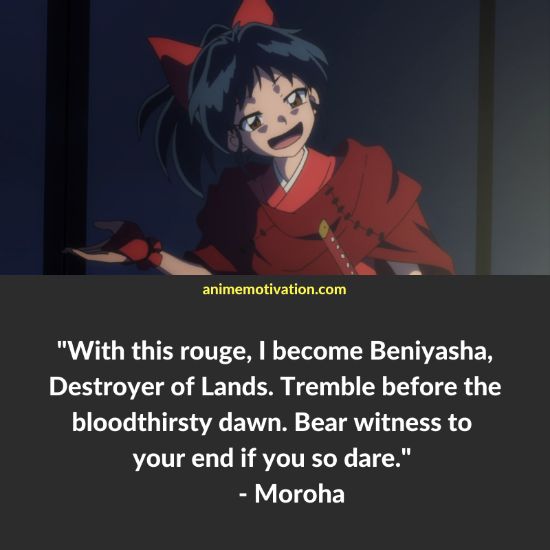 “With this rouge, I become Beniyasha, Destroyer of Lands. Tremble before the bloodthirsty dawn. Bear witness to your end if you so dare.” – Moroha 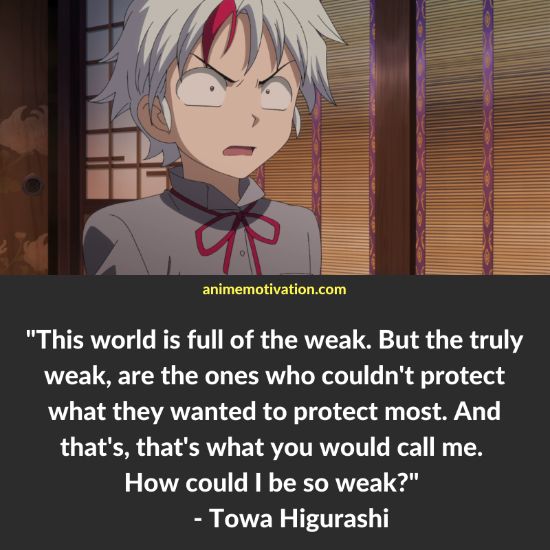 “This world is full of the weak. But the truly weak, are the ones who couldn’t protect what they wanted to protect most. And that’s, that’s what you would call me. How could I be so weak?” – Towa Higurashi 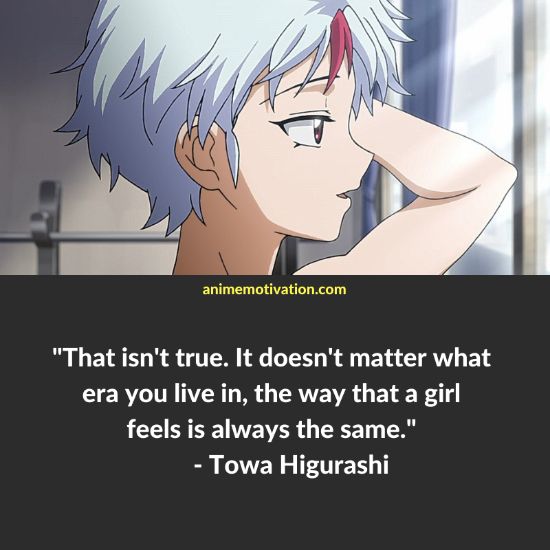 “That isn’t true. It doesn’t matter what era you live in, the way that a girl feels is always the same.” – Towa Higurashi 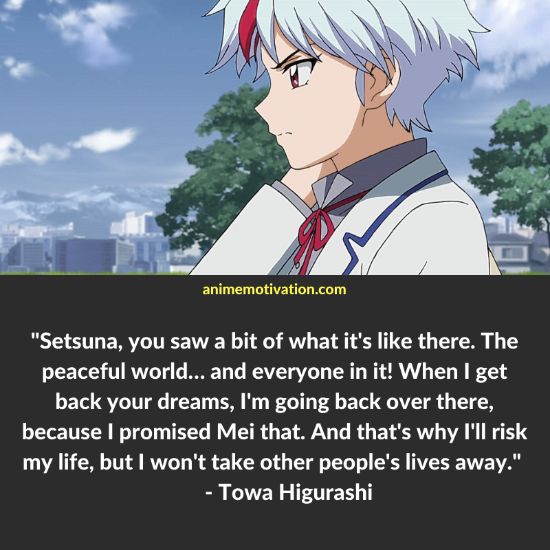 “Setsuna, you saw a bit of what it’s like there. The peaceful world… and everyone in it! When I get back your dreams, I’m going back over there, because I promised Mei that. And that’s why I’ll risk my life, but I won’t take other people’s lives away.” – Towa Higurashi 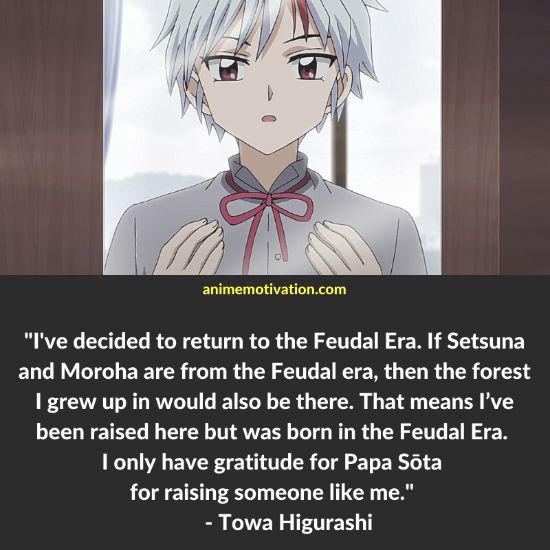 “I’ve decided to return to the Feudal Era. If Setsuna and Moroha are from the Feudal era, then the forest I grew up in would also be there. That means I’ve been raised here but was born in the Feudal Era. I only have gratitude for Papa Sōta for raising someone like me.” – Towa Higurashi 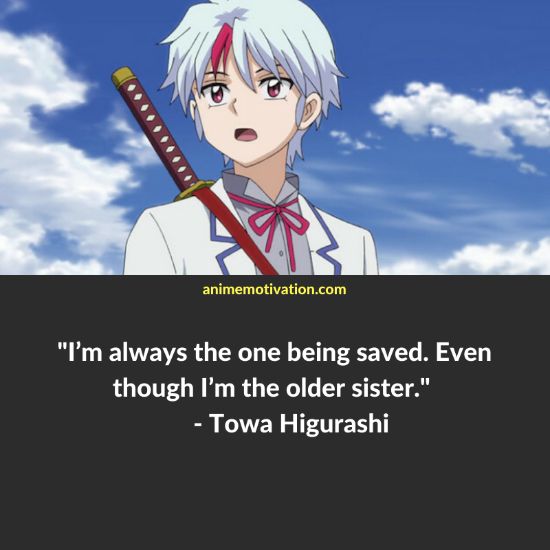 “I’m always the one being saved. Even though I’m the older sister.” – Towa Higurashi 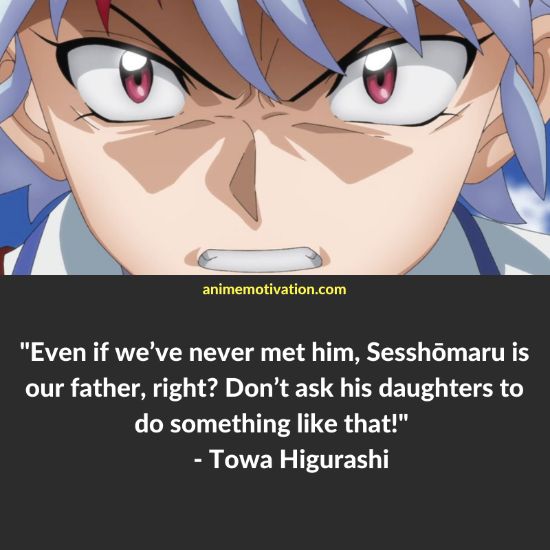 “Even if we’ve never met him, Sesshōmaru is our father, right? Don’t ask his daughters to do something like that!” – Towa Higurashi 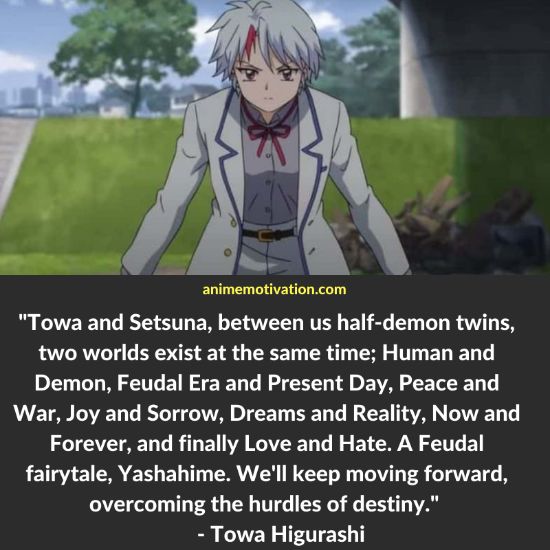 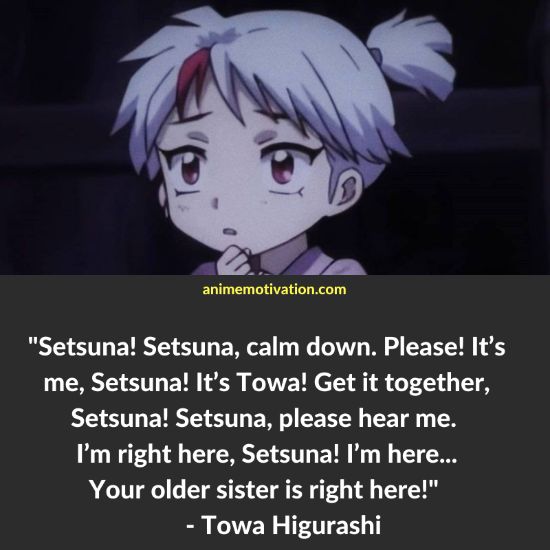 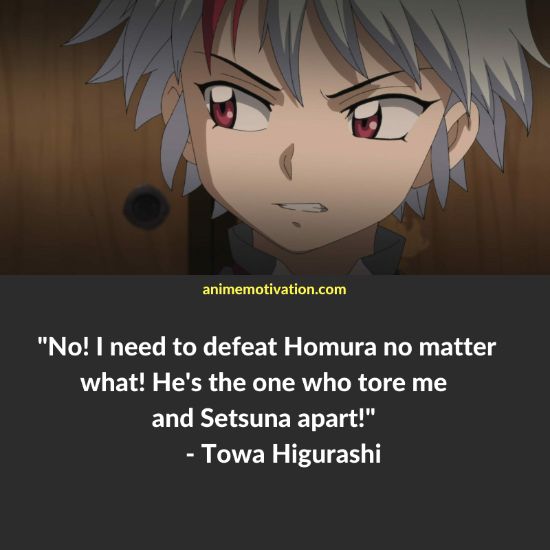 “No! I need to defeat  no matter what! He’s the one who tore me and Setsuna apart!” – Towa Higurashi 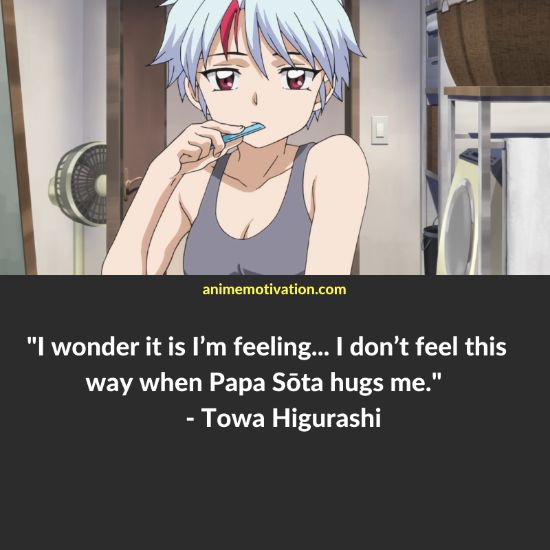 “I wonder it is I’m feeling… I don’t feel this way when Papa Sōta hugs me.” – Towa Higurashi