The anime industry is always under fire for something. It can’t even take a breath to chill for a moment or two.

The latest drama and controversy is connected to Yashahime: Princes Half Demon.

It’s the latest series that focuses on Sesshomaru’s twin kids in particular.

The latest episode has driven Twitter and social media up the wall! 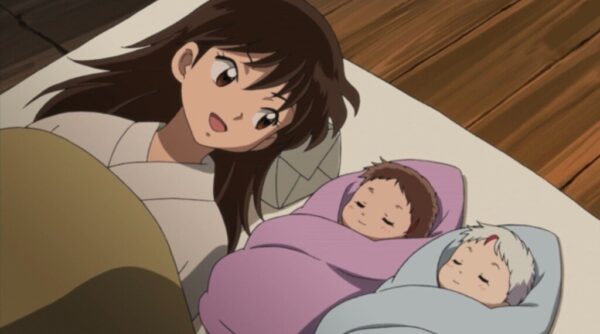 In this episode, Rin gives birth to the twins the is based on. The father is Sesshomaru, who fans will know is older than Rin.

There’s no arguments there.

After the latest episode and what went down, many Twitter users are accusing Yashahime of child grooming and pedophilia. 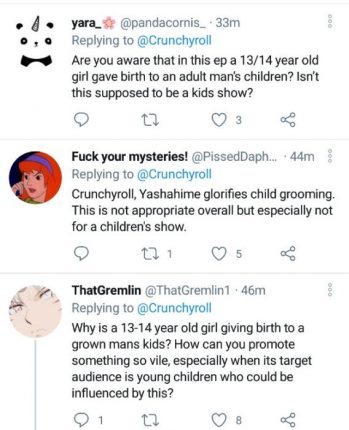 “Why is a 13 year old giving birth to a grown mans kids? How can you promote something so vile, especially when its target adueince is young children who could be influenced by this.”

“Are you aware that in this ep a 13/14 year old gave birth to a man’s children? Isn’t this supposed to be a kid’s show?”

@Crunchyroll @hulu @VIZMedia @FUNimation @Disney
So y’all are really condoning pedophilia and grooming by having yashahime happen, huh? UNDERAGE Rin with sesshomaru is really the thing you want to support? I am EXTREMELY disappointed in all of you for green lighting this

not yashahime…having a fucking grooming storyline…

romanticizing a grooming relationship is still not no matter the rating of the show, and fyi, yashahime IS targeted at young girls, so… https://t.co/Usdbscw6mn

I wash my hands of this ✨fuckery✨. Y’all broke my Lord Sesshomaru and made him into a grooming pedo💀. I agree with this tumblr post. Gonna treat the like I did with DBGT and Blood C. #inuyasha #sesshomaru #rumikotakahashi #sunrise #Yashahime pic.twitter.com/SuMUUitLJy 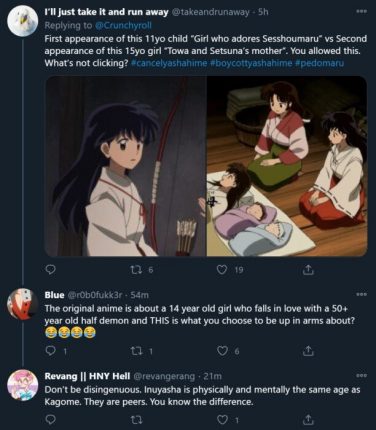 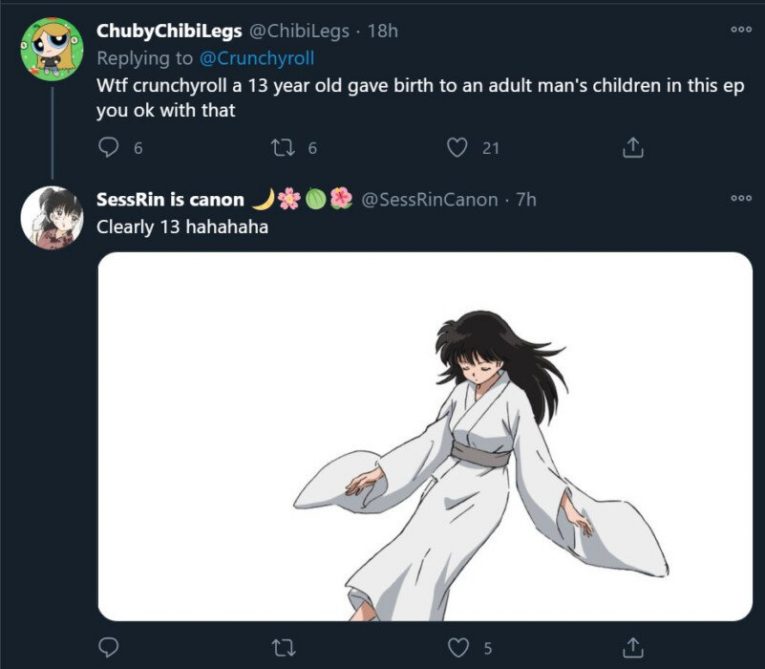 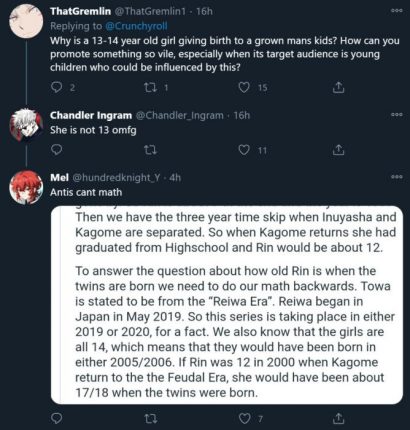 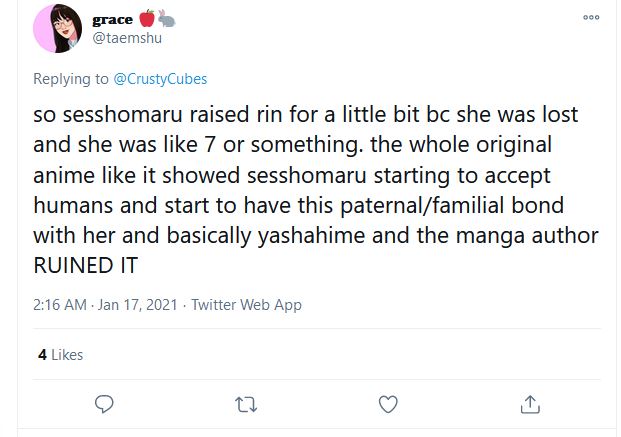 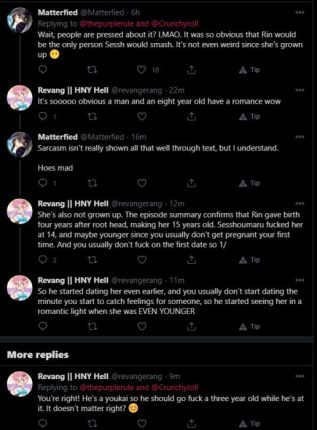 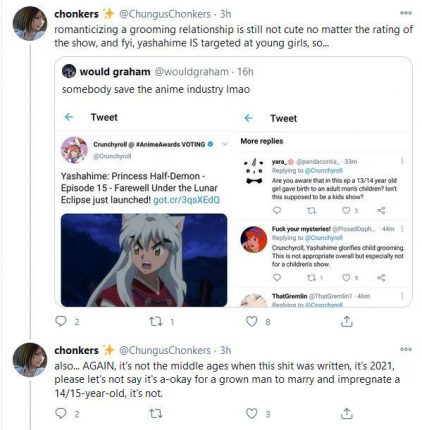 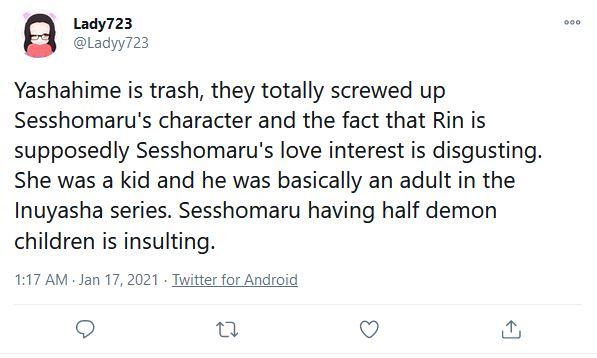 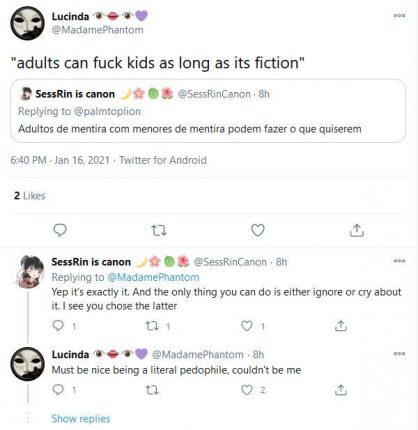 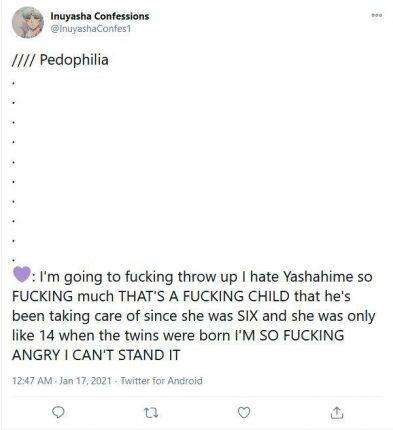 As you can see, Twitter is absolutely going bonkers.

is getting tagged constantly about Yashahime’s alleged “child grooming” and pedophilia taking place.

About half the people Tweeting are saying this, or at least have this view point.

Goodness. It’s like they dun even understand Sesshomaru’s character or seen his interaction with Rin from the start of their relationship (“grooming” period according to these folks). Have they been watching the same show (Inuyasha, the prequel to Yashahime)? https://t.co/QXcJxNbjGF

may i also bring up this one tragedy of westerners thinking “Yashahime is a problematic show and should be cancelled” because they claim the depicts a minor being in a relationship with an , hence, it’s ‘grooming’https://t.co/zSFGspbGnz

Credit to @/yashahime.theories on Instagram
.
This is about the so called “child grooming” or said that sesshomaru forced rin to love him, which is not true at all. Thank you for pointing this out #Yashahime #sessrin #rin #sesshomaru #HanyoNoYashahime pic.twitter.com/FeDAQm4RGD 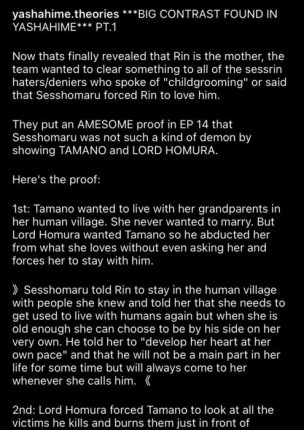 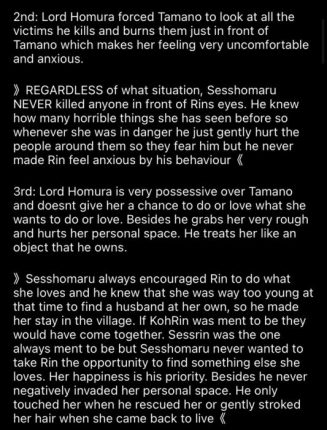 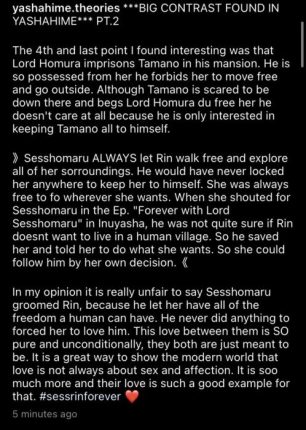 There’s a lot to breakdown from the images.

If you’re a fan of Yashahime, I’ll leave it to you to decide.

The basic argument is about how rin isn’t groomed by Sesshomaru, and how the controversy is blown out of proportion.

As well as it being taken out of context.

What do you think about this controversy?

Redo Of Healer Controversy Has Already Started, And its Not Even Aired Yet