It’s a well-known fact that Studio Ghibli is the Disney of the east. And much like Disney, they never let their movies be one-dimensional.

Unlike most children’s movies, Studio Ghibli has a certain charm that makes both young and old enjoy their work.

It always has a much deeper meaning to them, to the boy it might seem like a simple story of fairy tales but to the man, it reflects life. 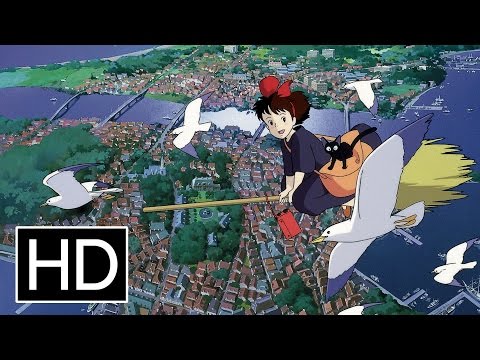 At first glance there’s not much to talk about Kiki’s delivery service, it’s a story of a young witch from the countryside adjusting to the busy city.

Like most of Ghibli’s work, the story is straightforward to the point that it is doubtful that it’ll even be entertaining.

But somehow it exceeds our expectations and goes beyond it.

Take Up on poppy hill for example. A simple story of a group of students trying to save a clubhouse from being destroyed.

Even with a plot that simple it still manages to make us invested, it’s all because there’s always some sort of moral idea that is being pushed.

In their case it’s the importance of preserving history.

This type of narrative storytelling is a part of all of Ghibli’s works, if so then there must also be some sort of deeper meaning to Kiki’s delivery service.

In fact, there is, and it’s not a pleasant one. 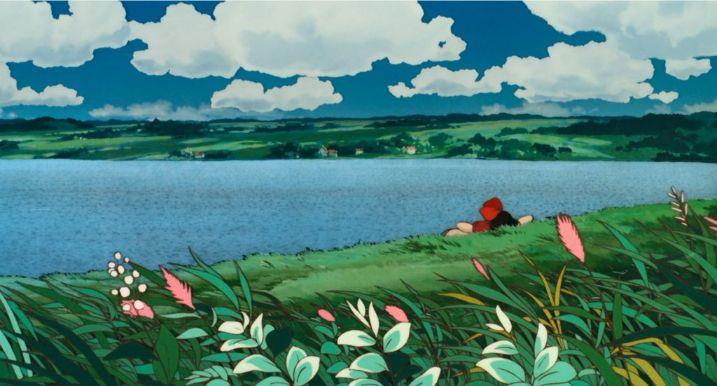 The movie starts out in the lush green field overlooking a lake in Kiki’s hometown.

We are presented with the colorful scenery of the countryside, later on, she rushed to her house after hearing on her radio that tonight’s weather will be perfect.

She’s so excited that she told her parents that she will leave a month earlier before her scheduled departure.

She went as far as brushing off a camping trip that her father set up before she goes away for who knows how long.

It is quite the disappointment that she wants to go away on such short notice but we must remember that she is young and carefree, we can associate this with adolescent teenagers.

They’re adventurous and curious as to what the world has in store for them. 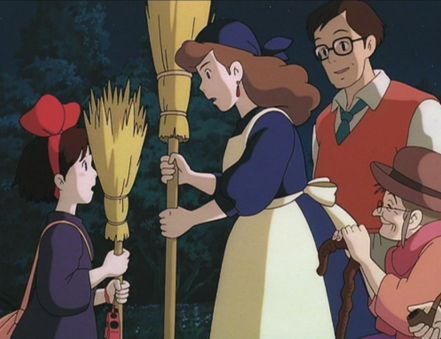 They want to leave the comfort of their homes to explore and experience life out there. Meanwhile, the parents who knew what it’s like to be young have to let their kids go.

They have to, it’s a necessary step in growing up.

The scene where Kiki is about to leave her hometown and her friends and family waving her goodbye.

There’s a fleeting sense of sadness which is all symbolic of leaving for college, going overseas, or leaving home in search of a much better future.

It’s a hard thing to do but it’s a sacrifice needed so we can find our true self out there.

There’s a strong sense of sentimentality for our home town but we all know that we can’t stay there forever.

We might come back sometime later but for now, we have an eagerness to satisfy our curiosity about this new adventure far away from home. 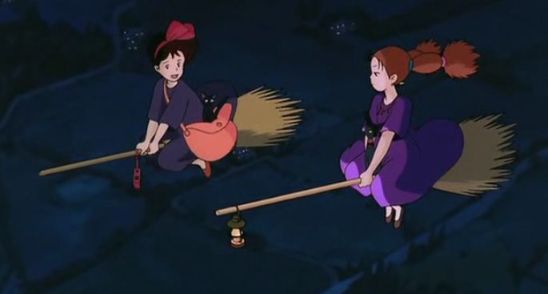 As Kiki is soaring through the night sky on her way to a distant town, she met a fellow witch, a very accomplished, elegant, and intelligent witch and she acts like so.

At this moment Kiki saw her ideal self in front of her it becomes clear that she developed a sense of admiration for her.

A lot like a little kid idolizing someone they set them up as a perfect person to follow and be like, they think that everything will go right, but the thing is that life never goes the way you plan it. 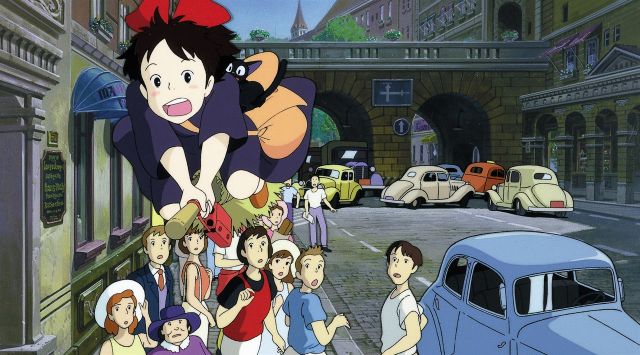 As Kiki goes into the city she is overwhelmed with all that’s going on.

She knows that she has a lot to learn in order to thrive and it’s in this process that we see a gradual change of Kiki.

Later on, she realizes that she can’t force her ideals of a perfect dream into reality.

instead of being who she wants to be, instead of pursuing her ideal self she has to settle for something lower.

Being a delivery girl has its merits and is still a noble job as we saw with her interaction with the old lady and the painter, but compared to her expectations her purpose was born out of necessity rather than passion. 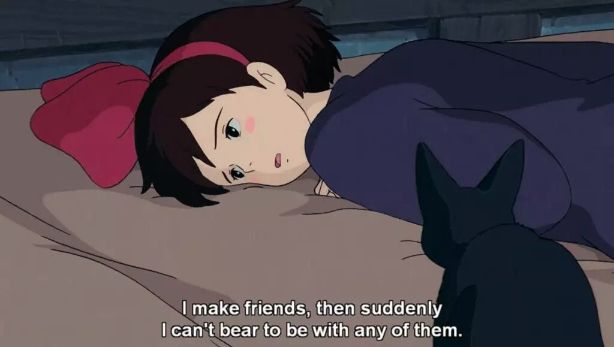 If you look at the bigger picture, this is not entirely a bad thing as it is a necessary step in growing up.

You can’t just stick to your childhood and chase it until you’re old, one way or another you have to grow up and in Kiki’s case, she’d have to do it at an early age.

As she goes through a rough time her cat lost its ability to talk and much later she can’t even ride her broom.

It’s only when she accepted the fact that she first has to go along with what she has and saw the positive side of things, that she was able to use magic again.

But even after she was able to ride her broom again her cat still isn’t able to talk. 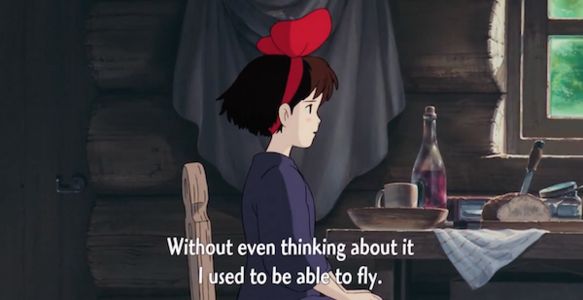 Until the end of the film there’s a sentiment that she still has a lingering sense of negativity inside.

Perhaps it’s the guilt of her not reaching her ideal self. The regret of past decisions, or anxiety about what might happen in the huge city that she lives in.

We might never know but this tiny detail makes the movie leave such a huge impression on its audience.

She knows the bad side of her choices but at the same time, she knows that she has no choice but to live through it.

In fact, it isn’t all that bad, she has a new family and a whole new world to explore.

Although it might not be what she expected but it is what it is and she must face her reality head-on, and she does it with a smile. 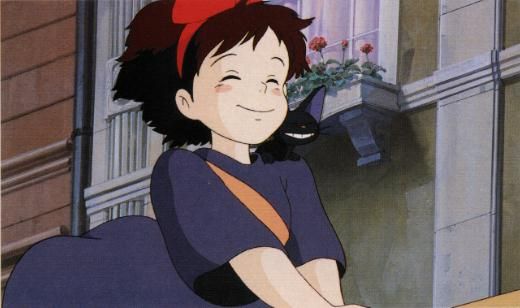 Contrary to popular belief that this movie is about the harsh realities of existence, I’ll have to disagree.

In my opinion, it’s about finding your noble purpose and acting upon it. True happiness doesn’t lie in reaching your ideals, it lies in the knowledge of you knowing that you have a contribution in society.

It’s about finding your great purpose in life and being passionate about it because no matter what happens it’s what’s going to keep you moving forward. And it’s what will make you brim with life.

Studio Ghibli has the charm of turning the most mundane everyday events into timeless masterpieces.

I came upon the realization that Ghibli doesn’t just make children’s films, they make long-lasting memories of an experience that will make a lasting impression on us.

Their films are made with love, passion, and masterful craftsmanship.

Unlike most children’s movies today which is dumbed down to oblivion, to the point that it doesn’t make sense anymore, Kiki’s delivery service is a stark reminder of what its genre should be.

35 Anime Quotes About Happiness That Will Open Your Mind