“Popular” means exactly what it sounds like: popular, famous.

The reason I say that is because a lot of people in the community can be bias when it comes to these things. Straying from the point instead of staying on track.

So I’ll keep it as “factual” as possible.

With that said – let’s get into these popular couples! 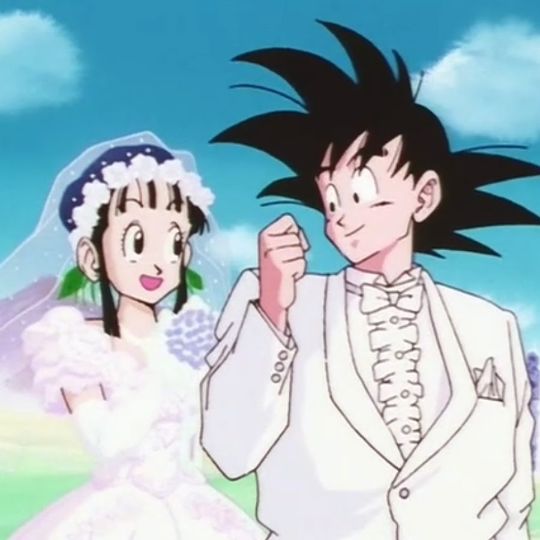 Goku And Chi Chi have to the most popular couples, no questions asked.

They might not be the best and most admired couple, but it doesn’t change how popular they are in the universe. 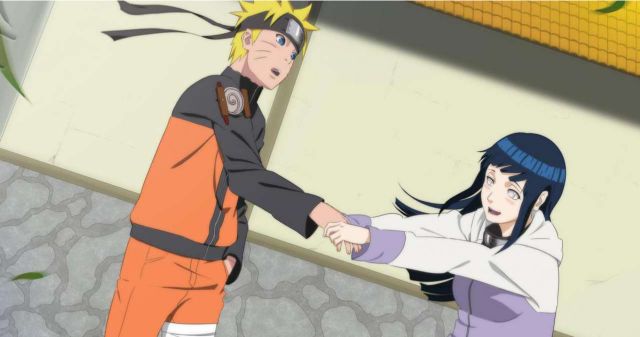 I haven’t even watched Shippuden. Or the first series. Or even the Boruto series.

And yet… I know how popular Hinata and are as a couple in the world. It’s hard to ignore their fame, or even deny the facts when it’s “in your face” no matter where you go.

At least to some degree.

Thank Naruto’s popularity for that. And their relationship is one of the “best” subjectively, as well.

Chuunibyou is an series created by Kyoto Animation. And as with many of their shows, especially romance or slice of life, this one is well-known.

It shouldn’t come as a surprise that Yutua and Rikka are on this list.

Their relationship is wacky and weird, because of their “chuunibyou” ways. And the weirdness Rikka Takanashi gets up to.

4. Zero Two And Hiro (Darling In The Franxx)

I’m not gonna lie. anime series in 2018, until it went downhill and took a u-turn on the original plot.

And made a mess of everything.

But that doesn’t change the popularity of Zero Two in particular, and especially Zero Two with Hiro as a couple.

There are wallpapers everywhere on the internet that showcase it. And not to mention – is extremely popular, despite the controversial ending and in general. 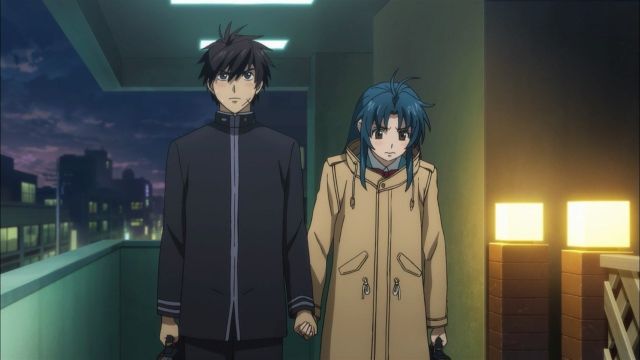 Sousuke And Kaname’s relationship is one of the most official on this list. It’s been building up since the first season of FMP. And made lots of progress since FMP season 3.

As far as popularity – Full Metal Panic is one of the most known and consistent shows to date.

The same goes for the protagonists! 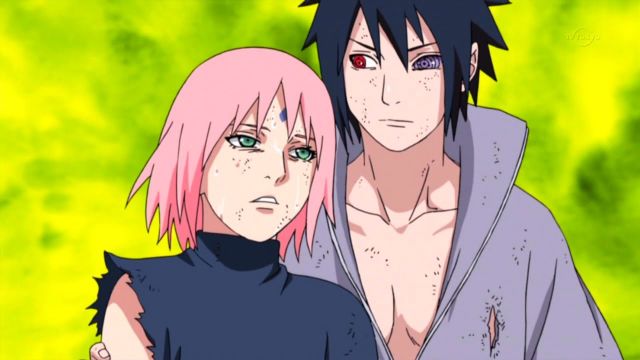 Sakura gets abused in the community a little too much from my point of view, But I’ve never watched .

And Sasuke is well-known for his behavior in the series, and I know that despite not watching a single episode.

Even still  – while their relationship as a couple isn’t anything to sing about, they’re still insanely popular so it’s only right I include them.

Relevant: 6 Of The Most Popular Genres In The Anime Industry 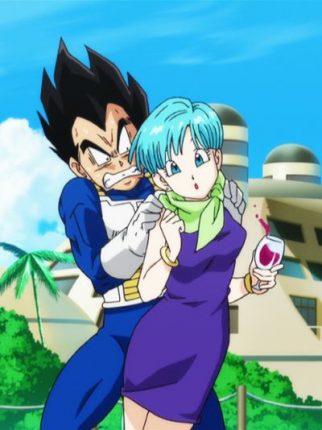 Vegeta and Bulma are individually popular in the world.

There’s probably not a  person who hasn’t seen or heard of either character in some way or another.

And as a couple? They’re a power couple who make things happen in the world of and .

They’re one of my favorites! 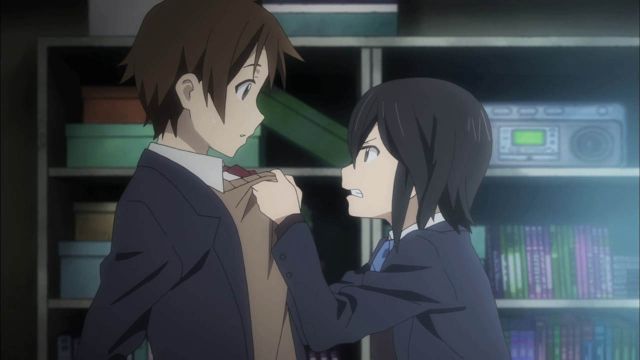 Taichi and Inaba are known because of the popularity of Kokoro Connect. It’s what I call a “middle ground” series because while it’s not super famous, it’s still quite popular.

Inaba is the typical Tsundere girl who calms down later on into the series. Where as Taichi is used as “fodder” for Inaba’s Tsundere tendencies. 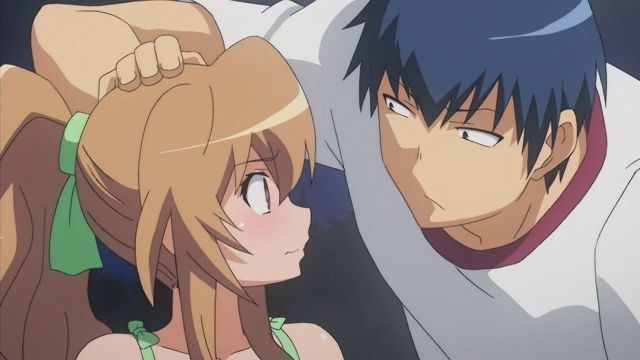 Taiga is another girl who’s a typical Tsundere in the community. Because of the constant verbal and even physical abuse in the form of “comedy”.

I’d even go as far as saying she’s one of the most famous. And for that reason – their relationship, the dramatics, and how it turns out makes them popular as couples. 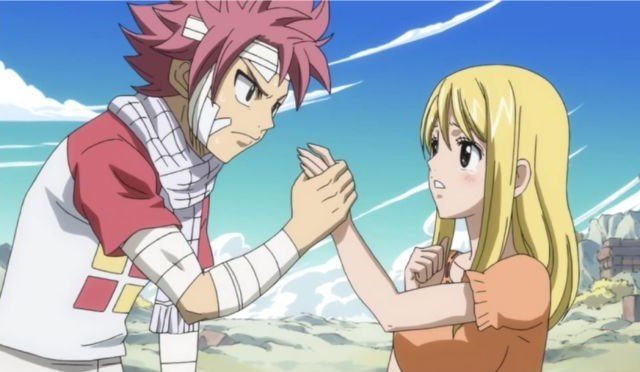 They’re not official like other couples on this list. And the author of probably won’t take it in that direction. But that doesn’t change how they’re perceived as “couples”.

Nalu (as fans call them) has become a big thing in the community for romance and couples.

And these guys are already as popular as it is in the Shounen world anyway. 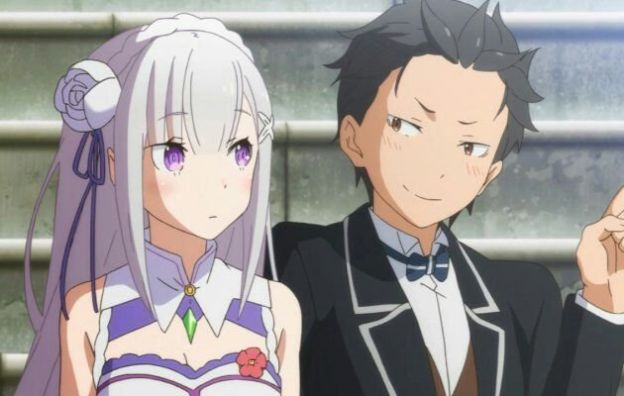 Subaru And Emilia will become official someday in the future of Re:Zero’s franchise. But as for now – it’s still in “standby”.

With that said – the obvious signs, clues and plot paints a clear picture of Emilia and Subaru being the perfect couple.

Alongside their popularity, it’s only natural I’d add them to this list.

Relevant: 5 Simple Reasons Why Emilia Is BETTER Than Rem From Re Zero

12. Mikasa And Eren (Attack On Titan) 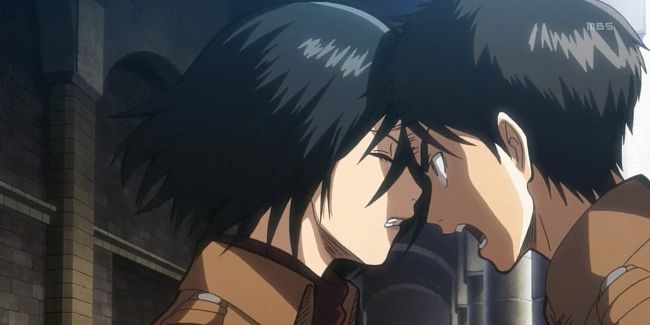 Mikasa And Eren are a strange bunch. Mikasa treats Eren more like a kid at times, but then again – with the way he behaves that’s not surprising.

And then Eren despite growing up with Mikasa, hasn’t really made a move like that.

As far as they see it – they’re couples. It’s what fans want, but who knows if it’ll happen. 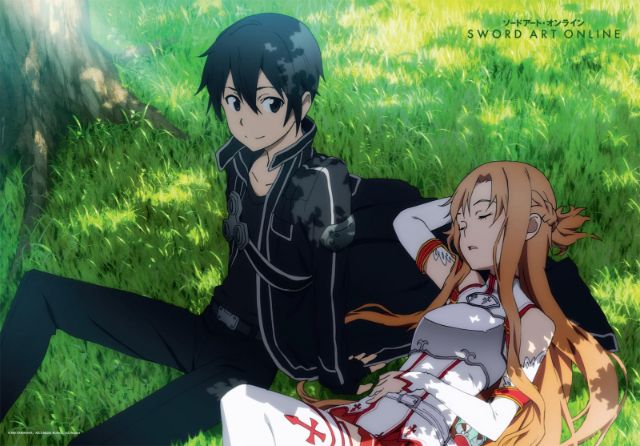 I’d argue that in the modern-day of the industry, Kirito And Asuna are one of the biggest anime couples ever created.

If we’re talking about couples, Kirito And Asuna are likely to come up in conversation. Or even images when you search for related things on the internet.

Plus SAO is a powerhouse in the industry as it is! 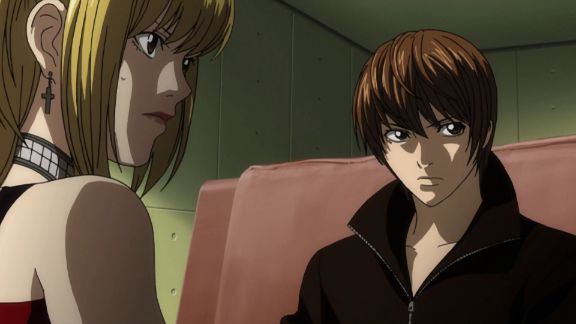 Light And Misa’s relationship reminds me of Sasuke’s and Sakura’s from : it’s nothing to get excited about.

Their relationship is more of a convenience, and somewhat broken. But the popularity of these 2 characters can’t be ignored, even if they’re a bad example of “anime couples”. 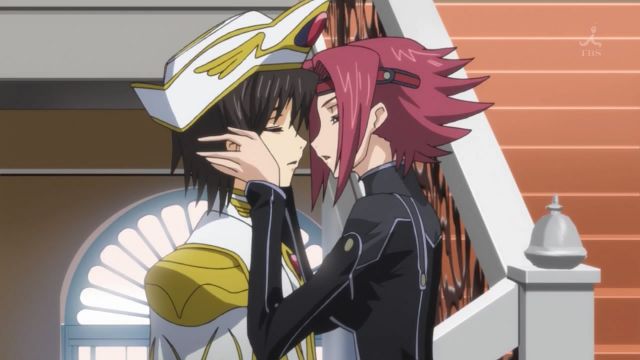 Lelouch And Kallen’s relationship isn’t the most official either. Just like Light And Misa.

Because the protagonists are similar from And Code Geass, their relationships are more about convenience and achieving their goals.

But even still – people still ship it. And both characters are popular when talking about couples and relationships. 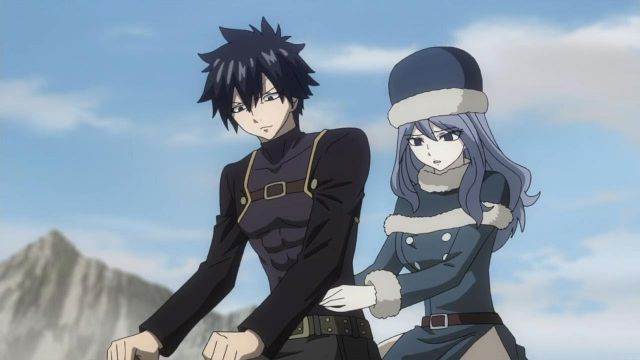 Gray And Juvia, or as people say: “Gruvia” isn’t official just like most anime doesn’t focus purely on romance, even if it has a lot of subtle hints.

But even still – Juvia loves Gray, and even though Gray is hesitant in sharing the same feelings, it’s clear he has “something” for Juvia.

And they’re both popular as F. 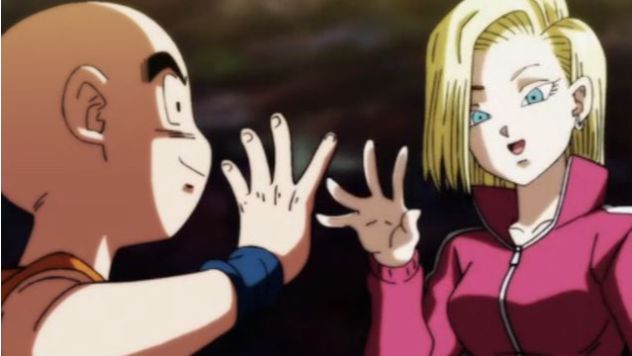 Krillin And Android 18’s relationship is one of the most curious because of the back story and how it came about.

It’s one of the more relaxed, sweet and legit relationships I’ve seen in an .

They’re like a real family, and underrated in my eyes (regardless of popularity). 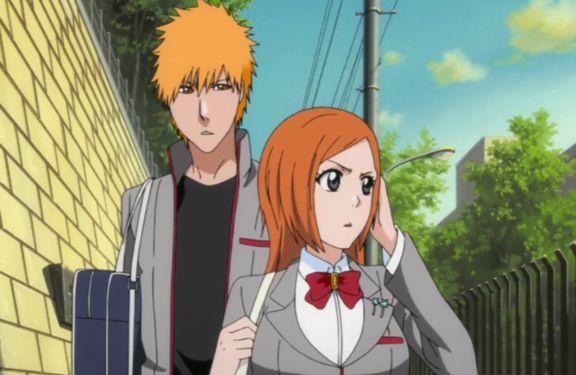 I would have rather Ichigo end up with Rukia Kuchiki in the Bleach series. It’s clear from the beginning that Rukia and Ichigo were meant for each other.

But it was never meant to be.

And either way – Ichigo with either Orihime or Rukia still makes it a “power” couple with tons of popularity among characters. 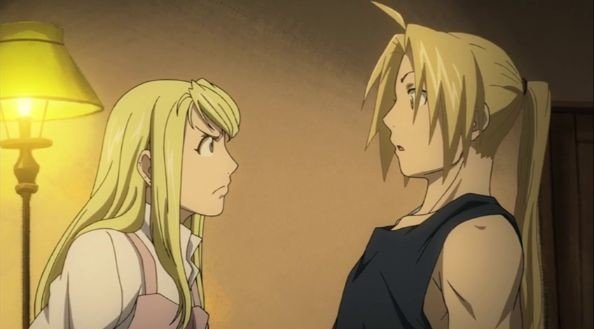 Edward is only small in the beginning of FMA. And apparently Winry isn’t interested in “small” guys in the plot-line. But all that changes.

is legendary for its philosophical plot and deep story.

And together – Edward And Winry, the mechanic, are well-recognized. 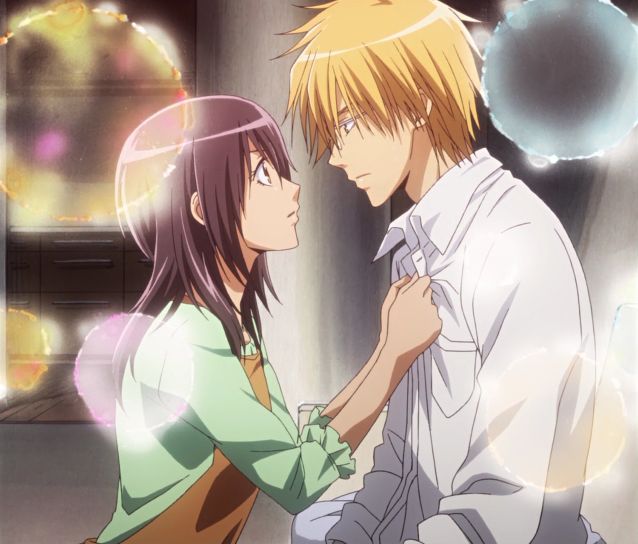 Misaki And Usui make an unusual and hilarious pair together. Usui somewhat “calms” her down, because she initially hates men after her father runs off and leaves the family in debt.

Considering Maid Sama is a Shoujo , they’re a popular couple in the world of romance and in general. Tatsumi And Mine end up married in the . So that seals the deal in terms of their relationship and the ’s crazy popularity. On top of the itself.

is an action series, but similar to : It still manages to reel you into the characters romance and relationships.

And hits you in the feels! 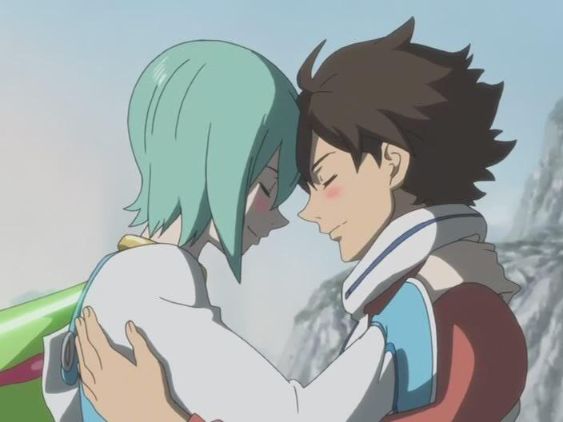 Eureka Seven is a high rated Mecha series with a touch of mystery and sci-fi.

Made by studio bones, the characters as you’d expect from this studio – are on point, with lots of depth and personality.

Renton And Eureka’s relationship is one you’ll either love or hate because of Renton’s personality in general.

But their popularity is undeniable.

23. Izuku And Ochako (My Hero Academia) 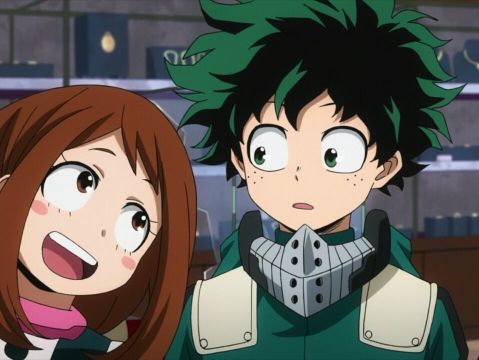 Izuku Midoriya has always been interested in Ochako Uraraka, to some extent. And the same is true for Ochako as well.

The is obviously not too focused on romance, but it’s clear how flustered they get from being around each other… That at some point in MHA, they’ll be an official couple.

I don’t need to speak of the popularity because it’s obvious! 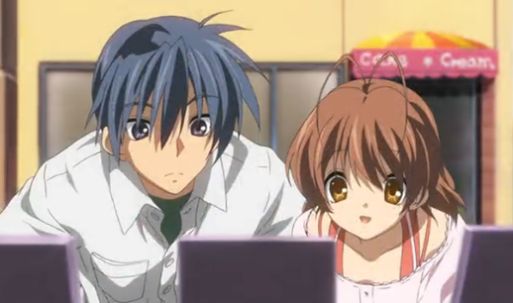 Clannad is a classic romance series produced by Kyoto Animation. One of the best studios in the industry.

It’s an original that started the trend of “romance gone bad” where something awful happens to the protagonist.

Tomoya And Nagisa’s relationship is a cruel reminder of what can happen to people in real life. It’s the reason Clannad (and this couple) are popular at all. 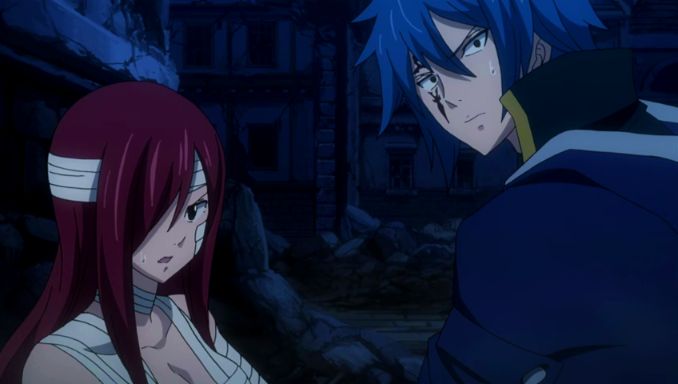 And Jellal are at least a little more official than and or Gray and Juvia. But they’re still unofficial regardless of how popular they are.

is that kind of , and none of the main characters popularity can be denied without being delusional to the facts. 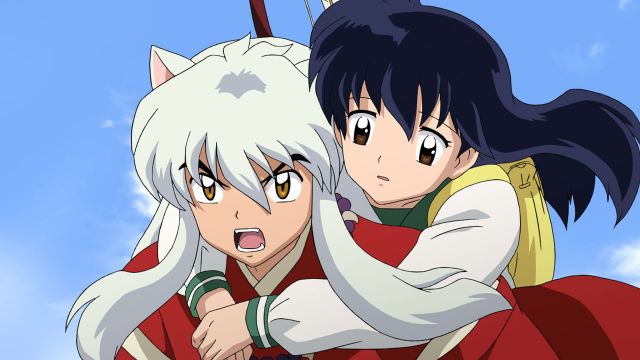 To end this post – we’ll go with and Kagome. One of the most loved anime series.

The deeper you get into this popular, but classic series, the more their love “blossoms” for each other.