2020 has been such a mad year, and it’s been a while since I wrote about Vic Mignogna.

The #coronavirus lockdown naturally delayed that “me too” situation and the drama with Vic’s sexual allegations.

With the facts I’ve already mentioned ages ago and some other facts of the situation, I wanna focus on just that.

I’ll make some relevant comparisons as well and the insane level of bias that surrounds Vic Mignogna.

This https://t.co/5TPY2wj6Bx
and the line that Scott disavows: “ nowhere stated or implied in any of its tweets that Mignogna had engaged in any harassment or intimidation, sexual or otherwise.” pic.twitter.com/Uez31C9Xb1

“ nowhere stated or implied in any of its tweets that Mignogna had engaged in any harassment or intimidation, sexual or otherwise.”

Read the Tweets for yourself. You can’t make this sh*t up. It’s there in black and white.

It’s well documented and Scott, a VP at is the one who said it himself.

There are legal documents on it as well.

“I am aware of the purpose of ’s tweets because I drafted them for the company in my role of Senior Director of Public Relations.” – Scott ()

“No statement by in its February 11, 2019, tweets is intended to defame Mignogna in any way, nor do the statements imply that Mignogna engaged in any harassing or threatening behaviour.” 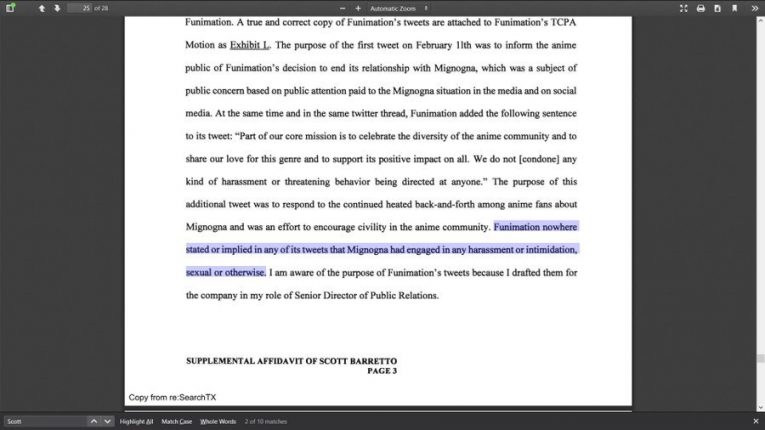 If that isn’t enough: Funimation spent $170,000 in legal fees, and sweared under oath they never “accused” Vic Mignogna.

That’s a BIG move on ‘s part and the talks loud and clear. Not to mention their “proof” and documents.

So the loud minority of:

And whoever else needs to accept the truth and stop holding onto false narratives they’ve pushed on Twitter. The only place anyone would bother to take it seriously.

Especially given has ALSO said Jamie, Monica (and whoever else) don’t speak for as a whole.

No one said that victims should stand by and do nothing. We asked them why they haven’t reported Vic Mignogna to the police, and they have no response. Same thing when we asked why there is no photo or video evidence even though this has apparently been happening for 20+ years

Just like Deep Humor says, no one said that victims should stand by and do nothing.

But the fact remains – if this situation was for real and had any clout, the police would be at Vic Mignogna’s door faster than the postman.

That would be followed by:

And everything involving and relating to those things.

At least ONE person would have got the police involved or at least “reported” Vic Mignogna to the police… If it was true.

After all – the loud minority claims Vic has sexually assaulted MANY women over the years. As far back as 10+ years.

There’s no way Vic Mignogna would be walking free this long if that were genuine.

I keep seeing KV comparing Weinsteins case to Vics…Weinsteins accusers contacted police,took him to court,filed reports like real victims should & there was criminal investigation’s. They didn’t take to twitter decades later to destroy his career for clout or a career boost. pic.twitter.com/fXlfXW1tlN

Harvey Weinstein, a man who was many times more influential than Vic Mignogna was jailed in a matter of years.

Victims contacted the police from the beginning, and eventually his influence crumbled and the scum bag got what he deserved.

In Vic Mignogna’s case though, there’s not a shred of evidence or police investigations.

It’s a load of baloney.

Related: Why Harvey Weinstein’s Case Is NOT The Same As Vic Mignogna’s

3. Vic Mignogna is not a known predator (and has no official record)

My god why do the people who are against Vic keep trying to push a false narrative and I’ll just say it like this.

Vic Mignogna is not a sexual predator and there’s nothing to prove it. You idiots are lost causes if you still serious believe he’s a bad person.

Continuing from my last point, Vic Mignogna doesn’t have:

That is a well known FACT. A fact is something written in stone but people seem to think opinions can overwrite it.

All you’ve gotta do is look it up for yourself. Or if you’re in the USA – ask the police directly and they’ll prove it after digging into their database.

Anyone pushing this narrative is obviously a couple of things:

The blessing and the curse of social media is anyone has an opinion, so anyone can push a false narrative.

Even if that person has no real world influence, power, clout, relevance or truth to their message.

People have been riding the bandwagon and it hasn’t crashed yet, hence why the conversation is still a thing.

This WHOLE shebang started because of Monica Rial (she wasn’t the first person, but a major turning point).

Ever since Monica, Jamie, Ronny Boy and whoever else jumped on the #metoo bandwagon, the ship continues to sail.

In this hostile environment we’re in and the bollocks they call a “gender” war, Men are guilty until proven innocent.

On the other hand – women are innocent until proven guilty.

Ashamed of @ACLU for supporting #AmberHeard as a spokespersons despite all the evidence in court where she admits in recordings to not only hitting/kicking/throwing but also gaslighting #JohnnyDepp saying a male couldn’t be a DV survivor bc of her sex/size. #AmberHeardIsAnAbuser

I’m still not over Amber Heard claiming Johnny Depp had her locked in a three day hostage situation but then admitted in court she had her phone, could contact whoever she wanted and could leave at anytime… hardly a hostage situation then is it, love.

If you’re still supporting Amber Heard, if you’re still rooting for her and cheering her on after everything that’s came out, even the things that didn’t include Johnny Depp than you have a problem. She’s absusive and like all abusers do, she has multiple victims.

When Johnny Depp said he can’t handle anymore physical abuse in their marriage, this was @realamberheard‘s response…

Johnny Depp was bashed by the media for years and years, and Twitter-trigger feminists blasted him for being a so called “abuser”.

And then 2020 happened and it turns out that Amber Heard was the culprit. With full on recordings and Amber admitting it in court.

Now they’re all playing mental gymnastics and showing their sexism.

Related: Anime Gender Equality –  Is This REALLY An Issue?

The #metoo crowd has been silent ever since

I say all that to say THIS is what’s happening with Vic Mignogna, and who knows how many more men out there.

Men are deemed guilty until proven innocent, so either:

If there’s any fact about Vic Mignogna the loud minority won’t ever admit to, it’s the double standards they take advantage of.

That’s the centre of everything else.

Any more Vic Mignogna facts worth pointing out?