Just over a year ago the author of Berserk Kentaro Miura passed away. And this news was of course trending all across social media and the internet in general.

In fact it was mentioned right here at Anime Motivation.

I remember it like it was yesterday. A Tsunami wave of fans rushed to this website to view all the Berserk quotes and share them to show their respect to the author.

Those Berserk quote posts have become one of the most popular on the entire site ever since. Now there’s some good news among the bad only a year or so later about the franchise. 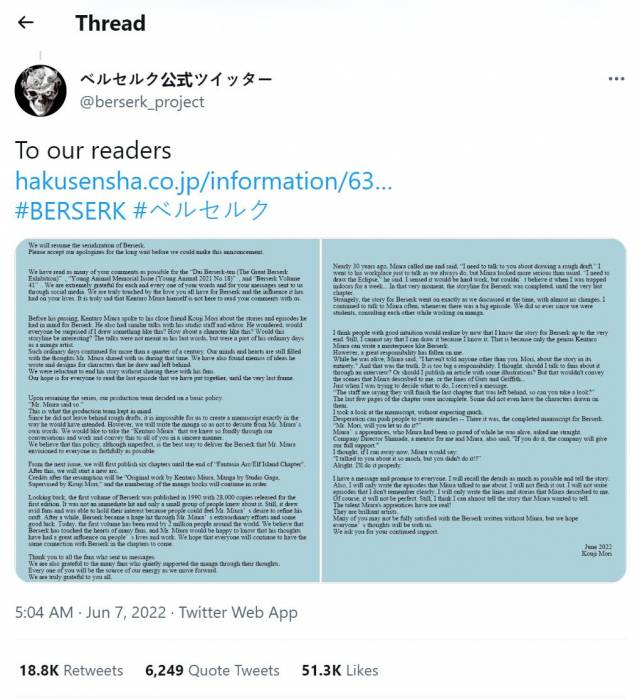 “Kentaro Miura told his best friend, Kouji Mori, the story and episode of “Berserk” during his lifetime. I also talked to the studio staff and the editor in charge. I didn’t leave it behind, but it was a natural everyday life as a artist, wondering if everyone would be surprised if I drew something like this, how about a character like this, and whether this development would be interesting.
Its daily life spanned more than a quarter of a century. Mr. Miura’s feelings are accumulated in our minds and hearts after spending a long time with Mr. Miura. I also found a concept memo and character design drawn by Mr. Miura. There is a strong resistance to ending the story without telling them to any of the fans. I want you to read the last episode and the last frame that we brought.”

And with that information it’s clear the series, even though it won’t be to the perfection of the original author, will still be continued until completion.

Also Kentaro’s best friend Mori, as he said in his own words, is the only person in the world who can do this since he has extensive knowledge of the Berserk series as far as direction, story, and more.

He was close enough to it and had a lot of talks with Kentaro which puts him in a good position to at least continue and finish the story in a way that will satisfy Berserk fans and everyone in general.

Recommended: 25 Deep Quotes From Berserk About Life And Hardships