English dubs don’t get much love. But for all the English dubs we do have, let’s thank companies like for that. Because out of the 5000-6000 romance/comedy shows, a good portion have English dubs

So if it’s romantic comedy that you want, I’ve personally watched all 12 of the shows I’m recommending in this post.

And I don’t regret watching ANY of them…

At least 50% of them will kill you of laughter. Assuming you watch it all the way through since some rom com start off slower than others. 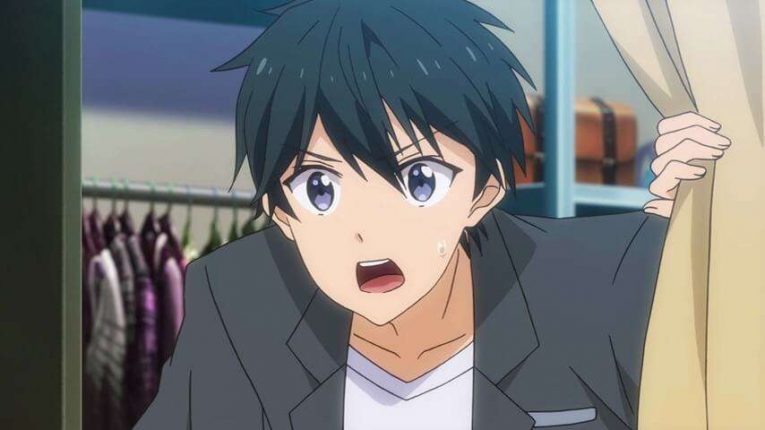 Masamune wants revenge for being rejected when he was an overweight child. This motivation by itself is the reason he’s so fit, healthy and physically attractive.

He put in the work, so it’s all deserved. How he goes about getting his revenge though, and what happens in between is hilarious for so many reasons.

One of my favorite things that you’ll love about this rom com is the inner dialogue. From a comedic perspective, it’s some of the best I’ve had the pleasure of laughing at.

I wouldn’t recommend watching this without seeing Full Metal Panic season 1 and season 2… Because Fumoffu is a spin-off series that has nothing to do with it’s military/action packed Mecha predecessors.

But if you can’t help yourself, just know this: Full Metal Panic Fumoffu has some of the most well-executed comedy, ever. And it’s even tastier if you’ve watched the original seasons of FMP.

I never knew it could be so funny. 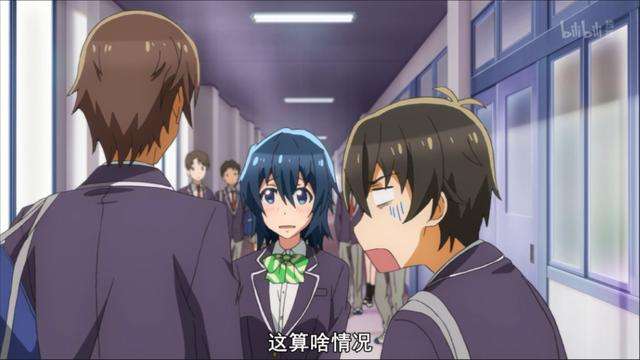 Like Masamune Kun No Revenge, Gamers was released back in 2017. And for me, it’s a “stand out” rom com series.

After all it focuses on gaming culture, gaming references, mixed with plain ridiculous comedy and over the top romantic misunderstandings.

That’s what separates Gamers from other rom com series. It’s theme is different, and if you can appreciate it, you won’t regret watching it for a second.

Maid Sama is a classic rom com series most fans know of, made by J.C Staff in 2010.

The story starts off “serious” focusing on Misaki Ayuzawa, a student council president by day and a maid by night in a maid café.

Her dad abandoned the family, and ran away with tons of debt to his name.

Now she’s forced (or motivated) to pay it off by working simultaneously while being in school.

This story is necessary because what follows will make more sense as you start to get into Maid Sama.

It has some of the best main characters for a rom com series, with a nice blend of comedy and intense moments.

5. Haganai: I Don’t Have Many Friends 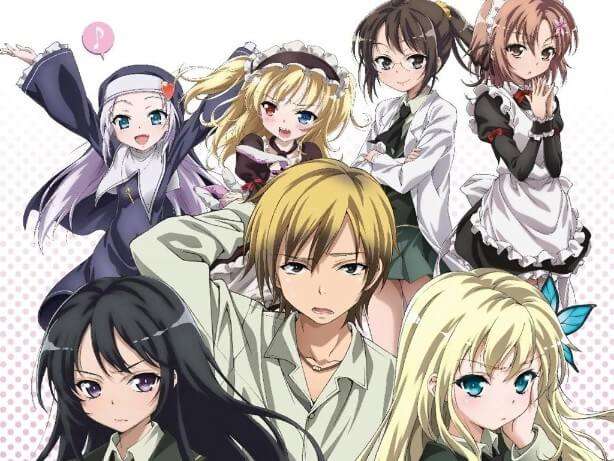 In case you can’t tell, this is a harem. Not just a rom com series in general. If that doesn’t bother you, then you’ll warm to Haganai easily.

It’s about making friends at its core, and how the main characters deal with loneliness. Not to mention bullying (which will piss you off). And no character is the same.

They’re either weird, laid back, aggravating, sweet or interesting as far as personalities go. 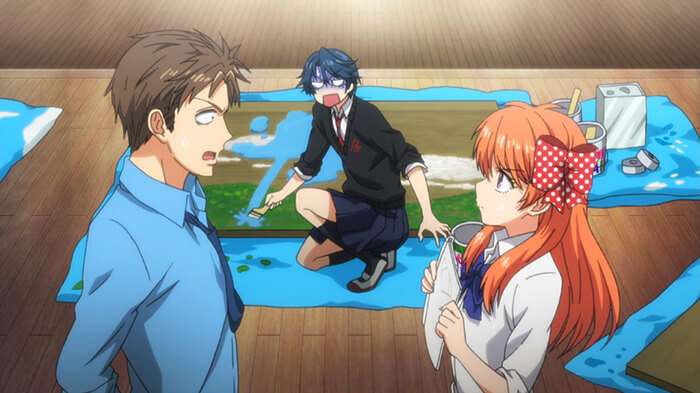 You could finish this in 4 hours if you wanted to, as it’s short (like Gamers).

It’s a silly rom com about Nozaki Kun, a artist, and Chiyo Sakura, a gentle girl who’s romantically interested in Nozaki. But he’s obviously too dense and absent-minded to see it.

From where I sit I’d say the comedy is fresh, and I’ve had some fun moments watching this that I won’t forget.

7. My Bride Is A Mermaid

A helpless teenager falls into the ocean, and almost drowns because he’s unable to swim. His own cocky attitude put him in this predicament.

Cliché 1st episodes aside, once you get past this, the comedy seen in My Bride Is A Mermaid is outrageously good (and skilfully inappropriate).

It’s my #1 recommendation for anyone looking for sweet, relatable and funny as fu** rom com’s to get into. 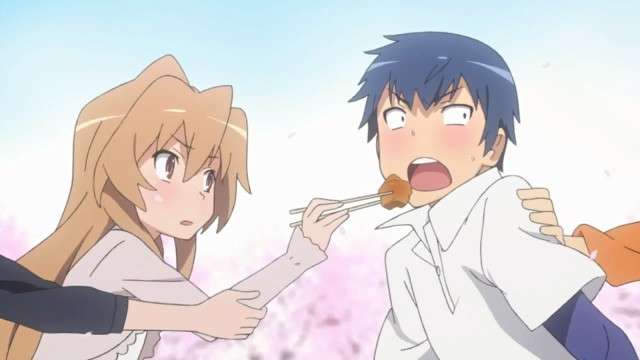 Also made by J.C Staff, Toradora takes rom com shows to a new level of emotion. In fact I almost quit up until episode 6-7. Only to discover what a masterpiece of a series is.

It’ll make you hate certain characters, and love them later after getting to know them better. And the physical fights that come later into the series will shock you.

An that can make you feel all kinds of emotions is always worth recommending for rom com fans.

Clannad is split into two different series. The 1st season is a pure rom com. Jokes, humour, silly episodes, silly characters… All of that is there. With some occasional moments where things get deep.

Season 2 on the other hand is less comedy and more romance.

This is where Clannad shines it’s brightest, and punches you in the gut the hardest… Because what happens is one of the saddest, most depressing things a romance has ever offered. 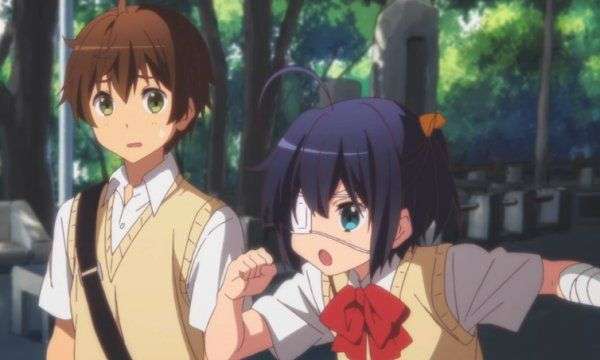 Chuunibyou is the kind of I’ve ditched half way, and then thought: “maybe I’m being too harsh, I’ll give it another go”.

The reason is: Chuunibyou is weird, and will make you cringe at the ridiculousness of its whole comedy routine.

But it does get better. And if you start to love it, you’ll end up treating Chuunibyou as one of the best rom com’s you’ve ever seen.

Nodame Cantabile is a special case. It takes , adds slice of life to the mix, blends it with comedy, throws in some romance, and manages to stir it into a masterpiece.

All the main and support characters are musicians with their own unique skills. Each with their own goals to take their talents to a professional level.

Unlike 99% of rom coms, Nodame Cantabile is also Seinen. So the age of each character is between 19-30+. Making it refreshing, especially for its animation and art style. 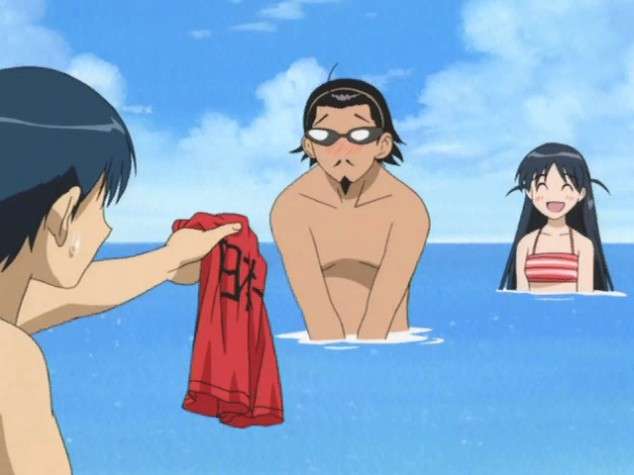 Remember the I mentioned earlier, Gamers? The best way to describe School Rumble is by saying: it’s like Gamers without the “gaming” elements.

The only major exception is School Rumble has more characters, and it’s 2 seasons long!

One thing I appreciate about School Rumble is the focus on Harima, a main character who’s a artist. And of course Tenma, who makes the so funny in the first place.

What English dubbed rom com have you been watching lately?

15 Of The Best Adventure Anime Series You Should Start Watching

How Fan Service Can Make Or Break An Anime Series

i really thought this was helpful

School Rumble is underrated. I would love to have seen it higher on the list but I’m glad it was on there. Harima is one of the most hilarious characters of all times with that incredibly out-of-place delinquent twenty-something vibe. But his love for Tsukamato Tenma is the real deal! 😀

I hear you. School Rumble is one of the originals when it comes to rom com, and even today it’s still a solid series with great MC’S.

Where do I actually watch all of these like what sites??

Funimation, Sentai Filmworks, or pirate site depending on where you’re located.

Hey, What about Oregairu ?

Watched the first suggested and got to say I really loved it It had everything and the exercise part was cherry on top gotta to say man if any other similar suggestion please let me know.

hello do you have any suggestions

I suggest the quintessential quintuplets. And just for an anime that is really good not so much rom com, I suggest cowboy bebop if u haven’t watched it yet