Yuichiro Hyakuya is the main character of Owari No Seraph. And starts out as an orphan.

After the tragic first episode, it sets the stage for many moments that bring out his est quotes.

This true for other characters, but we’ll focus on Yuichiro Hyakuya for now. 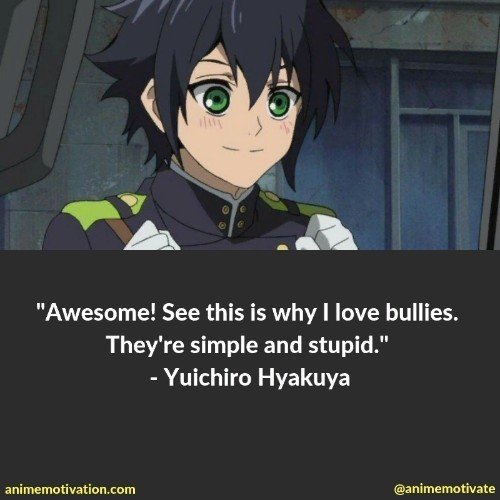 “Awesome! See this is why I love bullies. They’re simple and stupid.” – Yuichiro Hyakuya 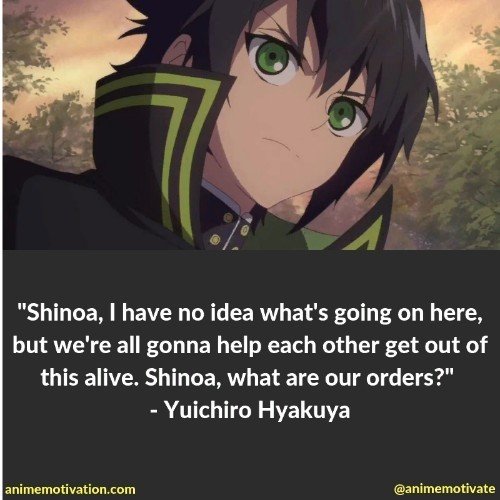 “Shinoa, I have no idea what’s going on here, but we’re all gonna help each other get out of this alive. Shinoa, what are our orders?” – Yuichiro Hyakuya 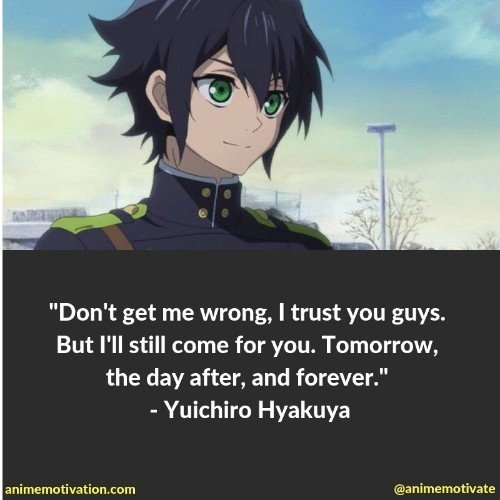 “Don’t get me wrong, I trust you guys. But I’ll still come for you. Tomorrow, the day after, and forever.” – Yuichiro Hyakuya 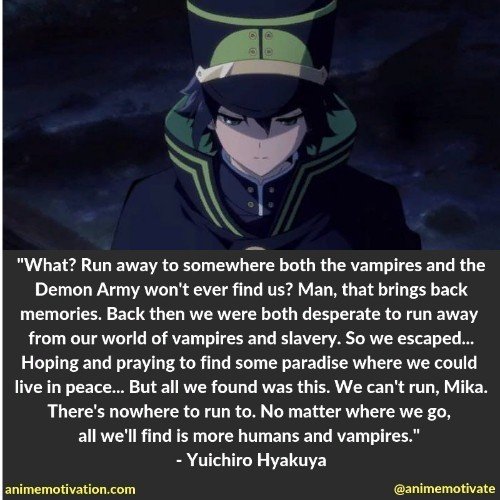 “What? Run away to somewhere both the vampires and the Demon Army won’t ever find us? Man, that brings back memories. Back then we were both desperate to run away from our world of vampires and slavery. So we escaped… Hoping and praying to find some paradise where we could live in peace… But all we found was this. We can’t run, Mika. There’s nowhere to run to. No matter where we go, all we’ll find is more humans and vampires.” – Yuichiro Hyakuya 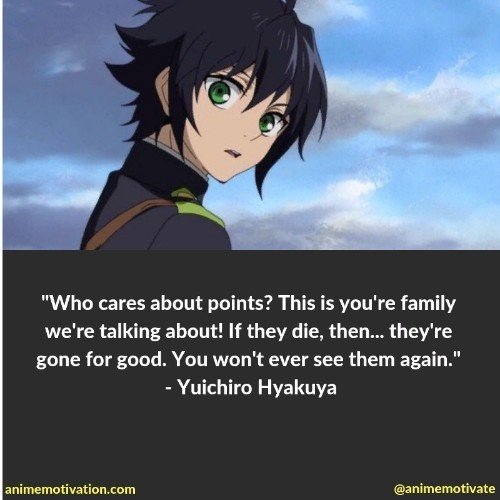 “Who cares about points? This is you’re family we’re talking about! If they die, then… they’re gone for good. You won’t ever see them again.” – Yuichiro Hyakuya 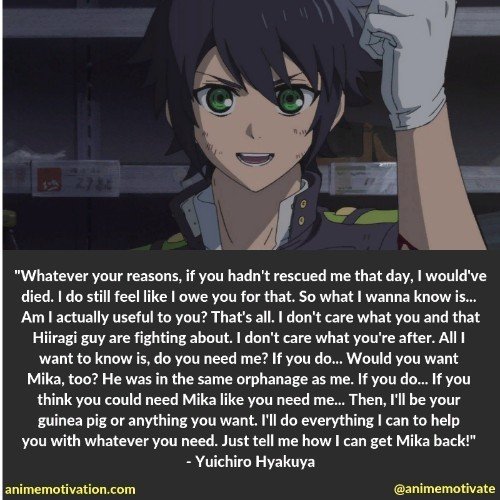 “Whatever your reasons, if you hadn’t rescued me that day, I would’ve died. I do still feel like I owe you for that. So what I wanna know is… Am I actually useful to you? That’s all. I don’t care what you and that Hiiragi guy are fighting about. I don’t care what you’re after. All I want to know is, do you need me? If you do… Would you want Mika, too? He was in the same orphanage as me. If you do… If you think you could need Mika like you need me… Then, I’ll be your guinea pig or anything you want. I’ll do everything I can to help you with whatever you need. Just tell me how I can get Mika back!” – Yuichiro Hyakuya 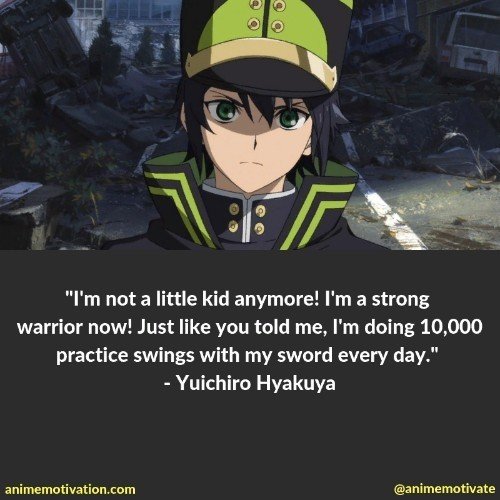 “I’m not a little kid anymore! I’m a strong warrior now!! Just like you told me, I’m doing 10,000 practice swings with my sword every day.” – Yuichiro Hyakuya 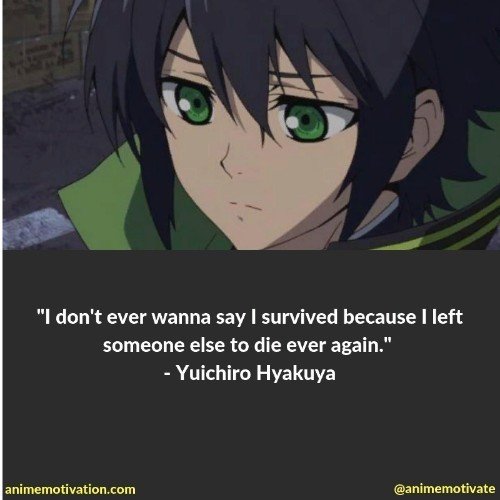 “I don’t ever wanna say I survived because I left someone else to die ever again.” – Yuichiro Hyakuya 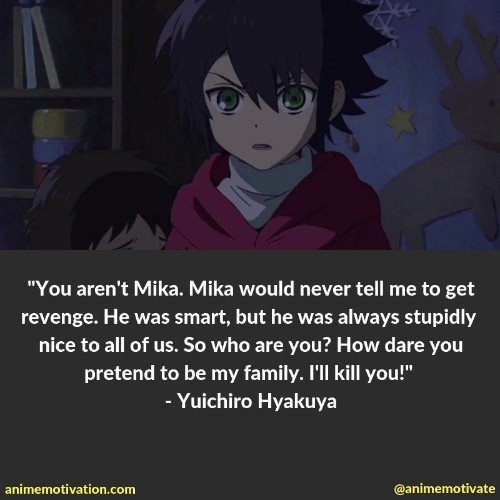 “You aren’t Mika. Mika would never tell me to get revenge. He was smart, but he was always stupidly nice to all of us. So who are you? How dare you pretend to be my family. I’ll kill you!” – Yuichiro Hyakuya 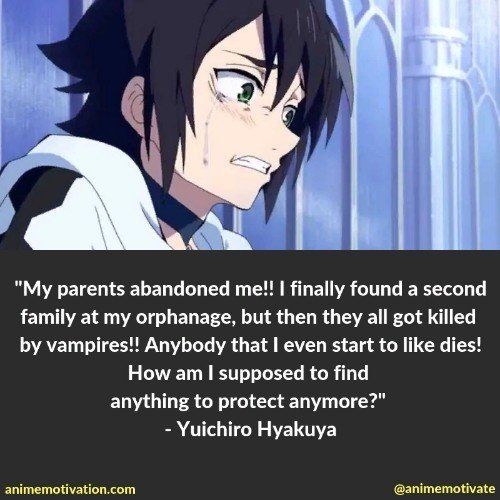 “My parents abandoned me!! I finally found a second family at my orphanage, but then they all got killed by vampires!! Anybody that I even start to like dies!! How am I supposed to find anything to protect anymore?” – Yuichiro Hyakuya 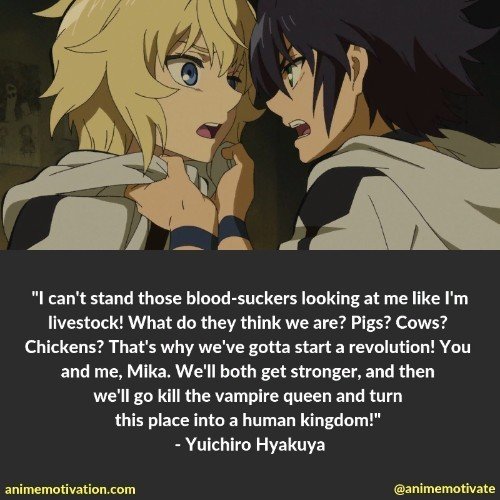 “I can’t stand those blood-suckers looking at me like I’m livestock! What do they think we are? Pigs? Cows? Chickens? That’s why we’ve gotta start a revolution! You and me, Mika. We’ll both get stronger, and then we’ll go kill the vampire queen and turn this place into a human kingdom!” – Yuichiro Hyakuya 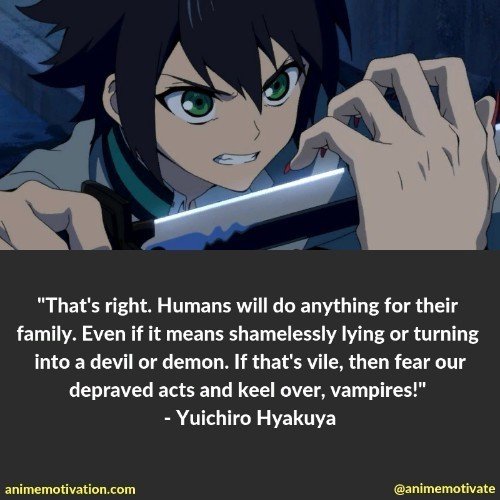 “That’s right. Humans will do anything for their family. Even if it means shamelessly lying or turning into a devil or demon. If that’s vile, then fear our depraved acts and keel over, vampires!” – Yuichiro Hyakuya 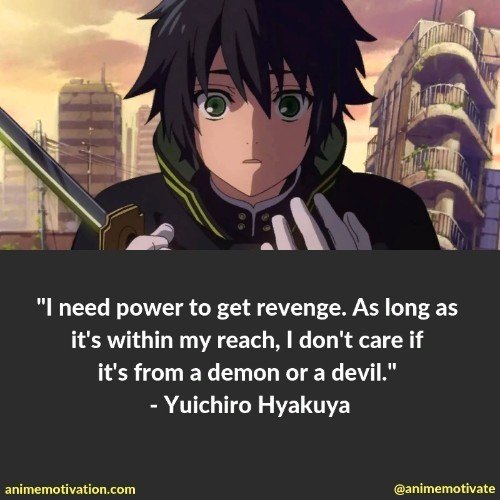 “I need power to get revenge. As long as it’s within my reach, I don’t care if it’s from a demon or a devil.” – Yuichiro Hyakuya 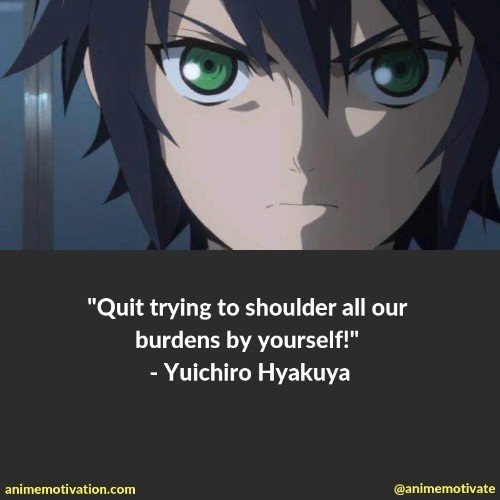 “Quit trying to shoulder all our burdens by yourself!” – Yuichiro Hyakuya 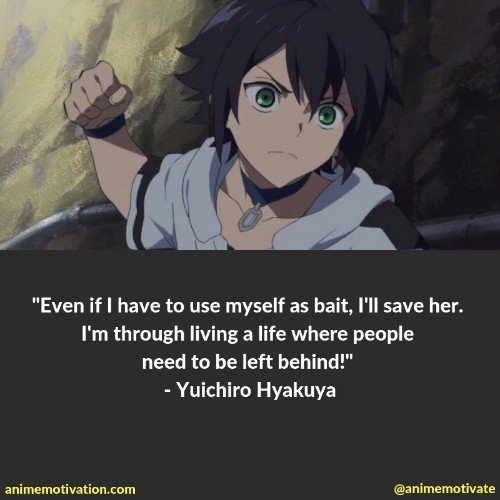 “Even if I have to use myself as bait, I’ll save her. I’m through living a life where people need to be left behind!” – Yuichiro Hyakuya 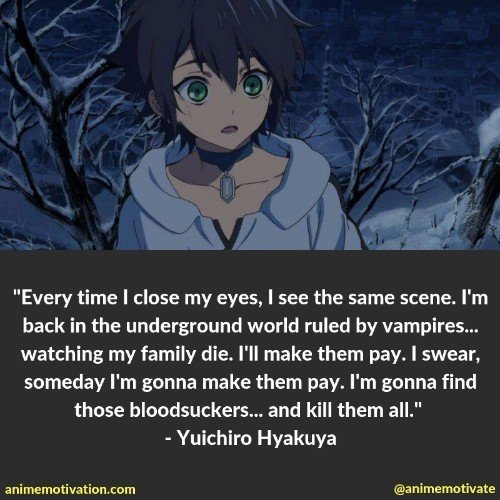 “Every time I close my eyes, I see the same scene. I’m back in the underground world ruled by vampires… watching my family die. I’ll make them pay. I swear, someday I’m gonna make them pay. I’m gonna find those bloodsuckers… and kill them all.” – Yuichiro Hyakuya 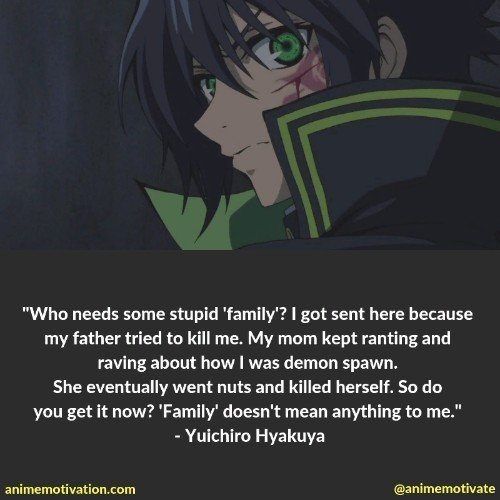 “Who needs some stupid ‘family’? I got sent here because my father tried to kill me. My mom kept ranting and raving about how I was demon spawn. She eventually went nuts and killed herself. So do you get it now? ‘Family’ doesn’t mean anything to me.” – Yuichiro Hyakuya 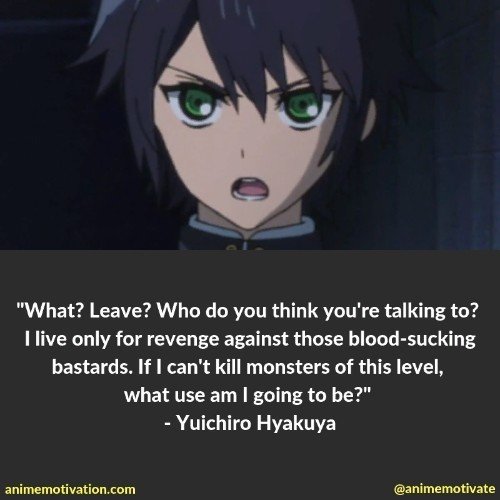 “What? Leave? Who do you think you’re talking to? I live only for revenge against those blood-sucking bastards. If I can’t kill monsters of this level, what use am I going to be?” – Yuichiro Hyakuya

40+ Demon Slayer Quotes To Help You Remember The Anime!