Coyote Starrk is the #1 Espada in , as far as ranking at least. And unlike others, he’s an Espada with two separate parts. The other half is Lilynette Gingerbuck, the form of a younger girl.

Given Starrk’s aspect of death is loneliness, it;s not surprising this plays into his personality, outcomes, behavior, and of course – his quotes and ways of thinking about the world around him.

Let’s share and get into Starrk’s best anime quotes from the series! 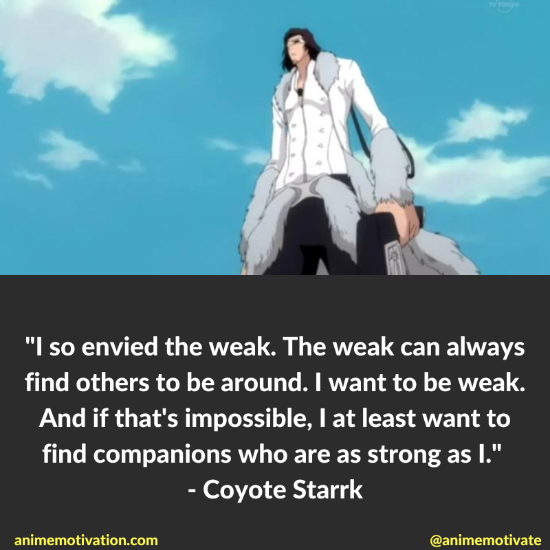 “I so envied the weak. The weak can always find others to be around. I want to be weak. And if that’s impossible, I at least want to find companions who are as strong as I.” – Coyote Starrk 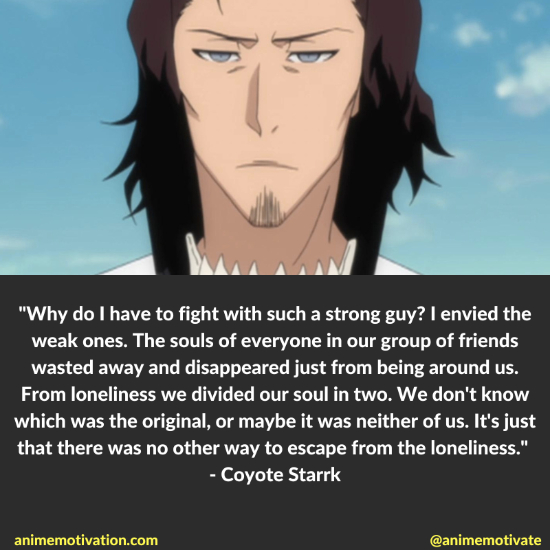 “Why do I have to fight with such a strong guy? I envied the weak ones. The souls of everyone in our group of friends wasted away and disappeared just from being around us. From loneliness we divided our soul in two. We don’t know which was the original, or maybe it was neither of us. It’s just that there was no other way to escape from the loneliness. I envied the weak ones. If you’re weak, then you can gather in as large a group as you want. I want to become weak and if that’s not possible, then I at least want to make friends that are as strong as me.” – Coyote Starrk 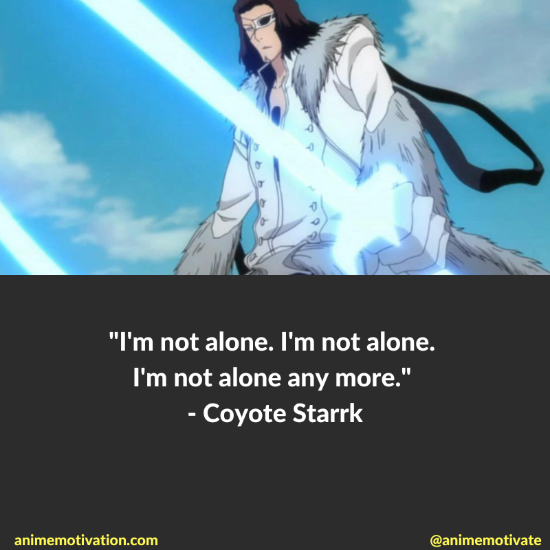 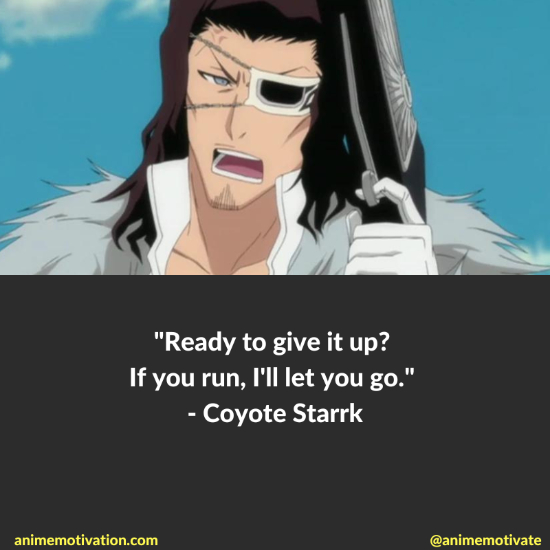 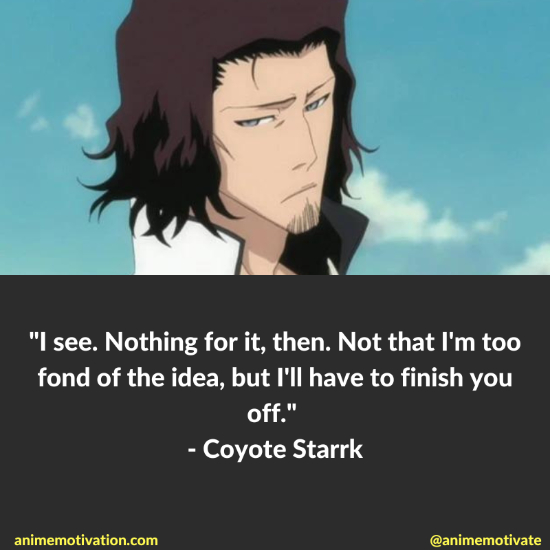 “I see. Nothing for it, then. Not that I’m too fond of the idea, but I’ll have to finish you off.” – Coyote Starrk 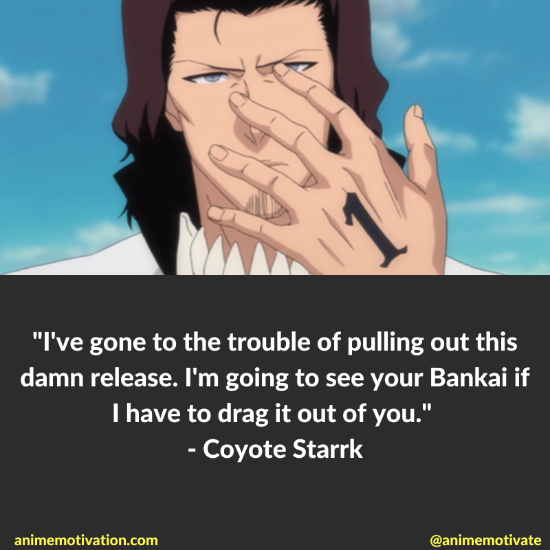 “I’ve gone to the trouble of pulling out this damn release. I’m going to see your Bankai if I have to drag it out of you.” – Coyote Starrk 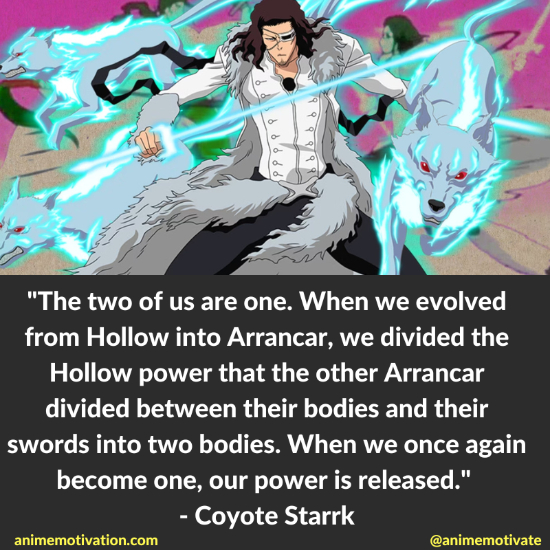 “The two of us are one. When we evolved from Hollow into Arrancar, we divided the Hollow power that the other Arrancar divided between their bodies and their swords into two bodies. When we once again become one, our power is released.” – Coyote Starrk 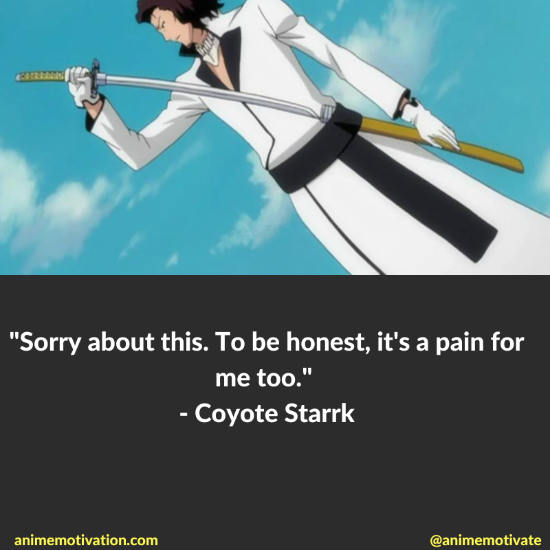 “Sorry about this. To be honest, it’s a pain for me too.” – Coyote Starrk 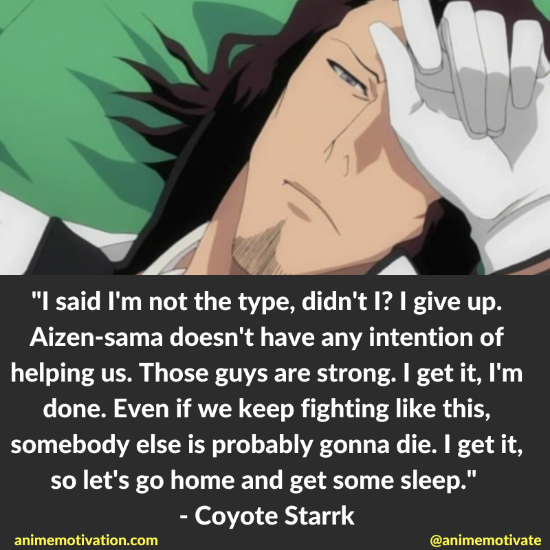 “I said I’m not the type, didn’t I? I give up. Aizen-sama doesn’t have any intention of helping us. Those guys are strong. I get it, I’m done. Even if we keep fighting like this, somebody else is probably gonna die. I get it, so let’s go home and get some sleep.” – Coyote Sarrk#

11+ Of The BEST Quotes From Grimmjow Jaegerjaquez (Bleach)