Nara Shikamaru. Seemingly lazy and unmotivated on the outside, but smart, cunning, and even a genius on the inside.

His laziness is his biggest downfall, meaning it’s the one thing that makes his character not as “interesting” in the very early stages of .

Shikamaru makes some of the best progress and even character development though, and has become a staple in the fandom.

Here’s all of his best quotes that reflect his:

And pragmatic mindset that allows him to succeed where others would fail! 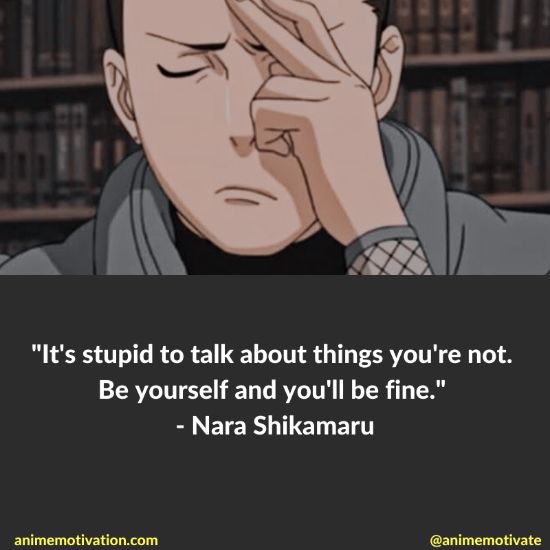 “It’s stupid to talk about things you’re not. Be yourself and you’ll be fine.” – Nara Shikamaru 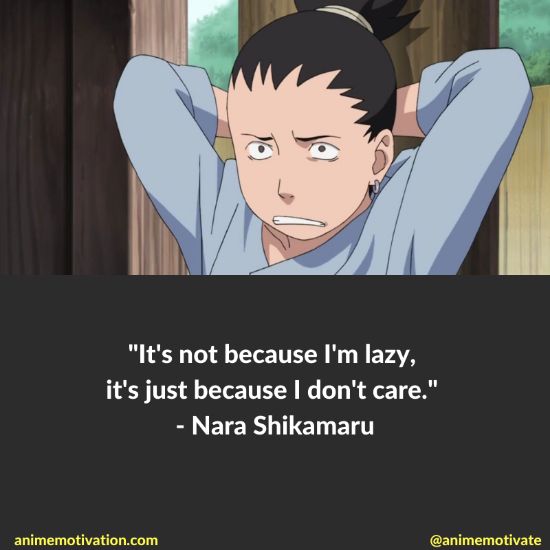 “It’s not because I’m lazy, it’s just because I don’t care.” – Nara Shikamaru 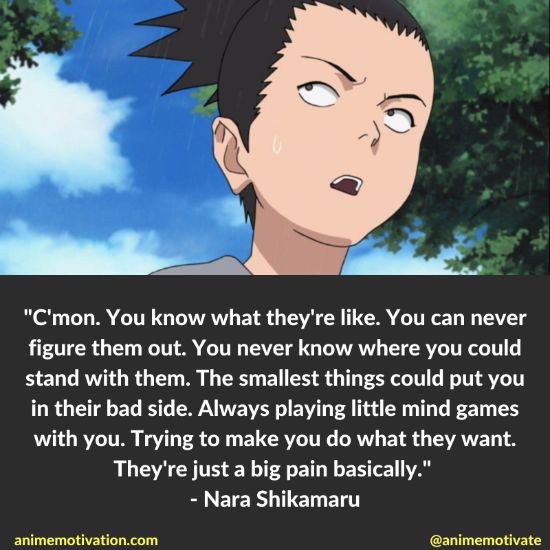 “C’mon. You know what they’re like. You can never figure them out. You never know where you could stand with them. The smallest things could put you in their bad side. Always playing little mind games with you. Trying to make you do what they want. They’re just a big pain basically.” – Nara Shikamaru 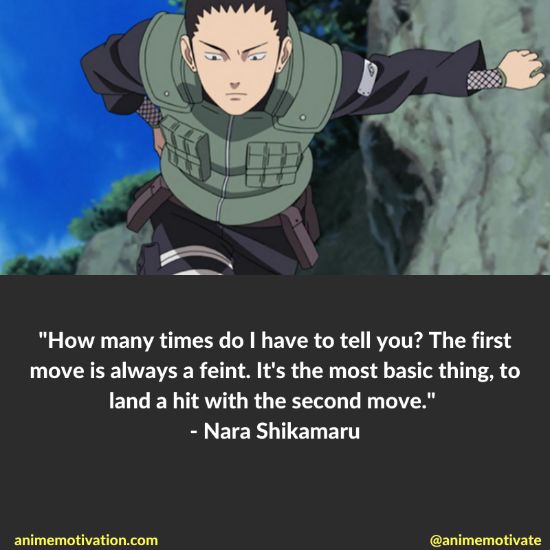 “How many times do I have to tell you? The first move is always a feint. It’s the most basic thing, to land a hit with the second move.” – Nara Shikamaru 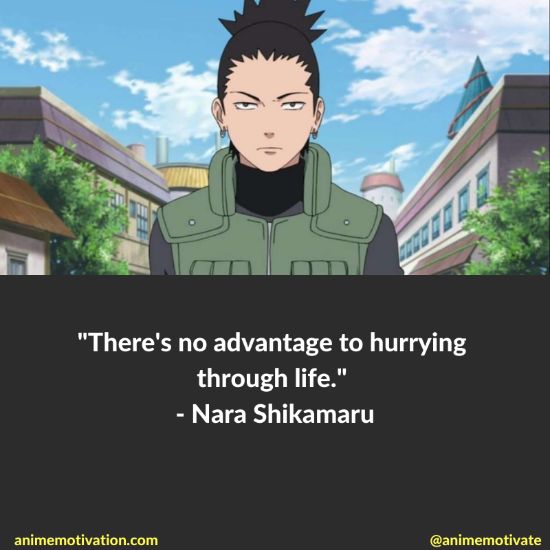 “There’s no advantage to hurrying through life.” – Nara Shikamaru 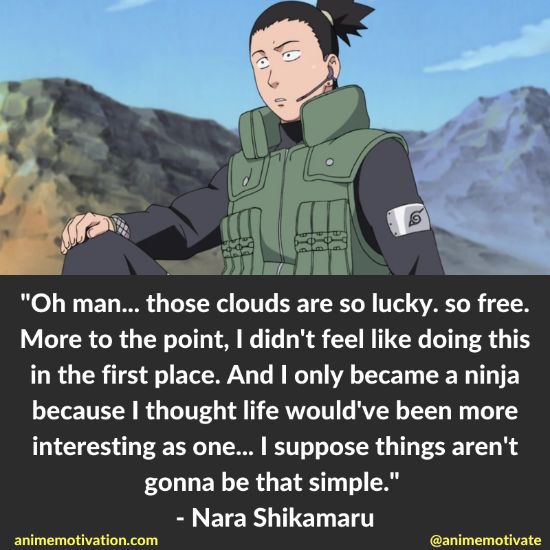 “Oh man… those clouds are so lucky. so free. More to the point, I didn’t feel like doing this in the first place. And I only became a ninja because I thought life would’ve been more interesting as one… I suppose things aren’t gonna be that simple.” – Nara Shikamaru 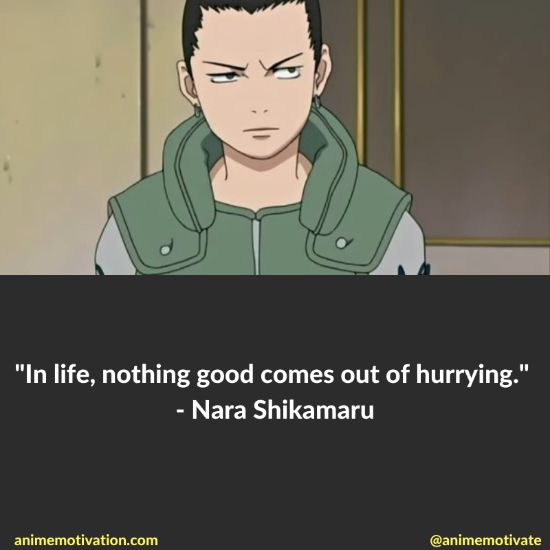 “In life, nothing good comes out of hurrying.” – Nara Shikamaru 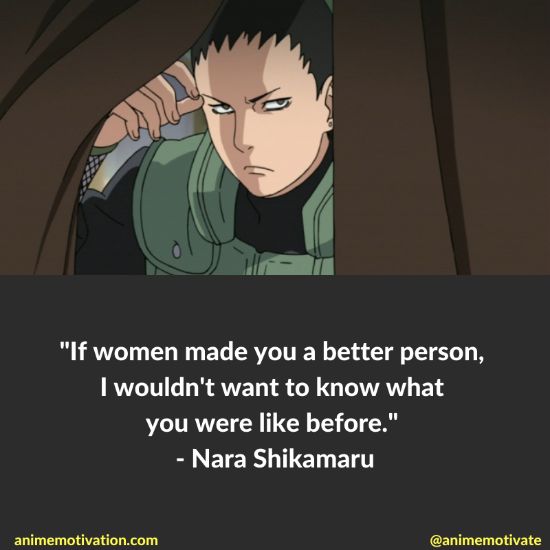 “If women made you a better person, I wouldn’t want to know what you were like before.” – Nara Shikamaru 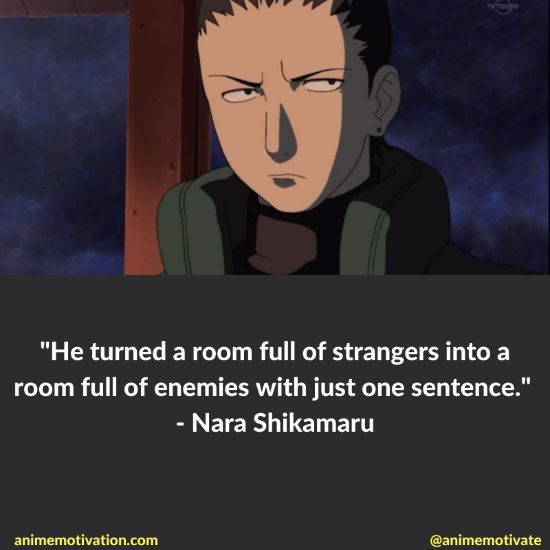 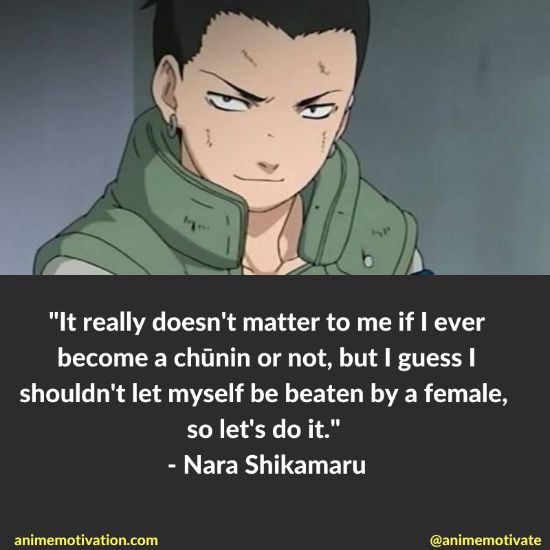 “It really doesn’t matter to me if I ever become a chūnin or not, but I guess I shouldn’t let myself be beaten by a female, so let’s do it.” – Nara Shikamaru 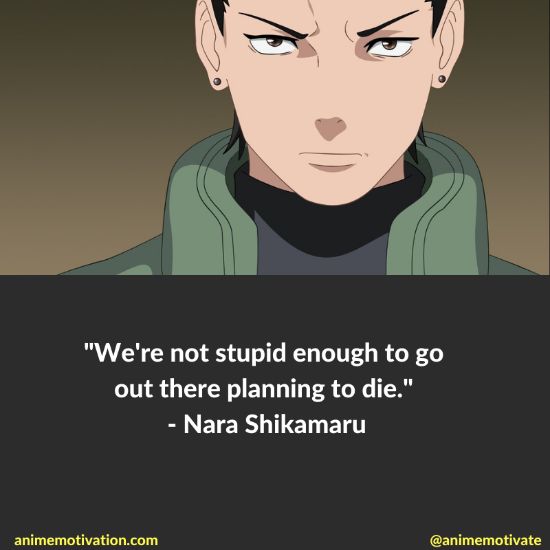 “We’re not stupid enough to go out there planning to die.” – Nara Shikamaru 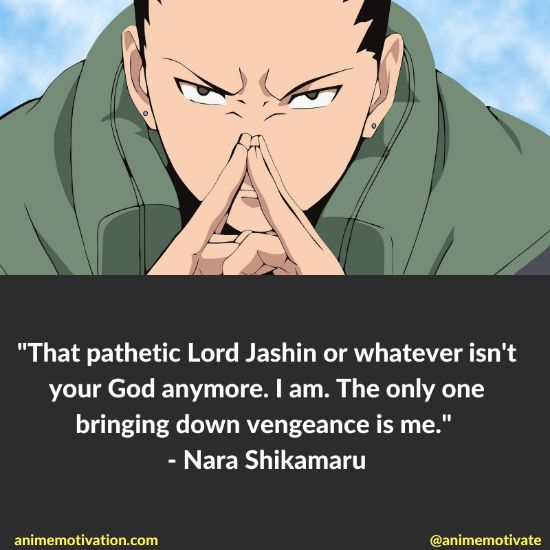 “That pathetic Lord Jashin or whatever isn’t your God anymore. I am. The only one bringing down vengeance is me.” – Nara Shikamaru 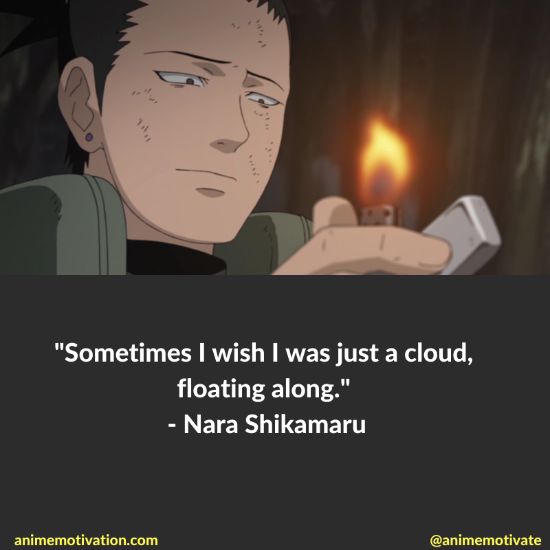 “Sometimes I wish I was just a cloud, floating along.” – Nara Shikamaru 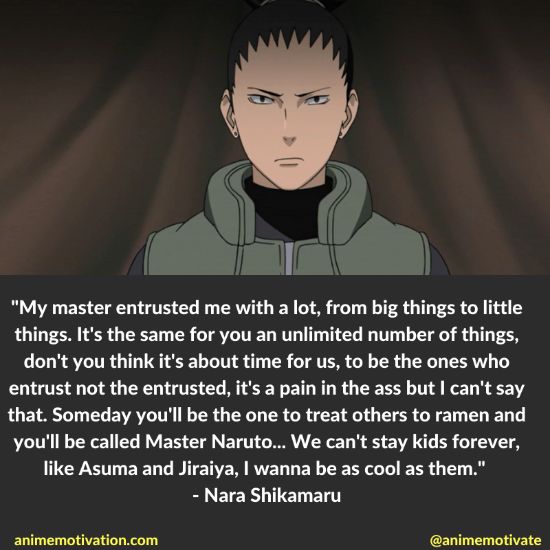 “My master entrusted me with a lot, from big things to little things. It’s the same for you an unlimited number of things, don’t you think it’s about time for us, to be the ones who entrust not the entrusted, it’s a pain in the ass but I can’t say that. Someday you’ll be the one to treat others to ramen and you’ll be called Master … We can’t stay kids forever, like Asuma and Jiraiya, I wanna be as cool as them.” – Nara Shikamaru 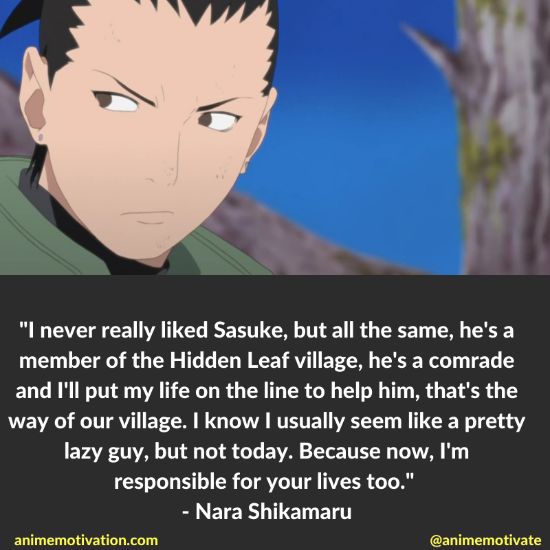 “I never really liked Sasuke, but all the same, he’s a member of the Hidden Leaf village, he’s a comrade and I’ll put my life on the line to help him, that’s the way of our village. I know I usually seem like a pretty lazy guy, but not today. Because now, I’m responsible for your lives too.” – Nara Shikamaru 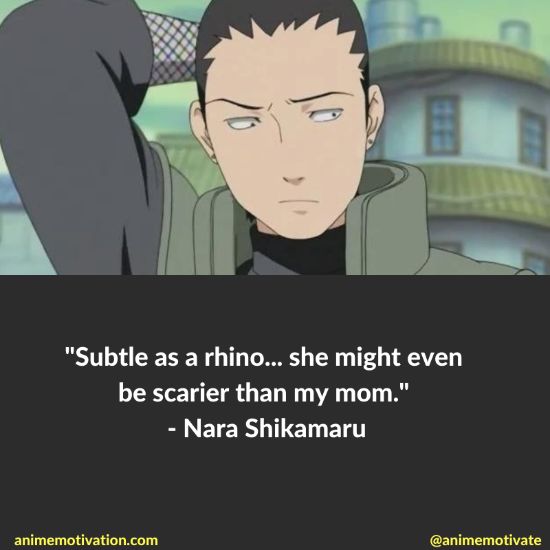 “Subtle as a rhino… she might even be scarier than my mom.” – Nara Shikamaru 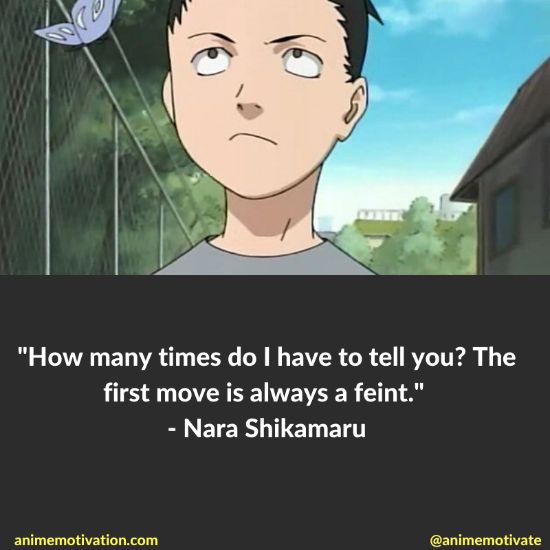 “How many times do I have to tell you? The first move is always a feint.” – Nara Shikamaru 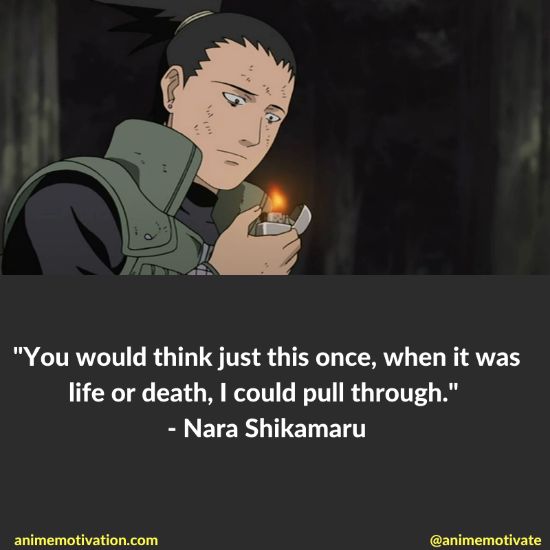 “You would think just this once, when it was life or death, I could pull through.” – Nara Shikamaru 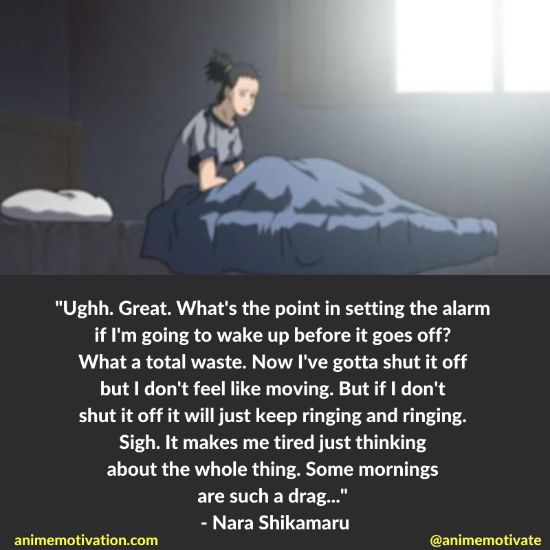 “Ughh. Great. What’s the point in setting the alarm if I’m going to wake up before it goes off? What a total waste. Now I’ve gotta shut it off but I don’t feel like moving. But if I don’t shut it off it will just keep ringing and ringing. Sigh. It makes me tired just thinking about the whole thing. Some mornings are such a drag…” – Nara Shikamaru 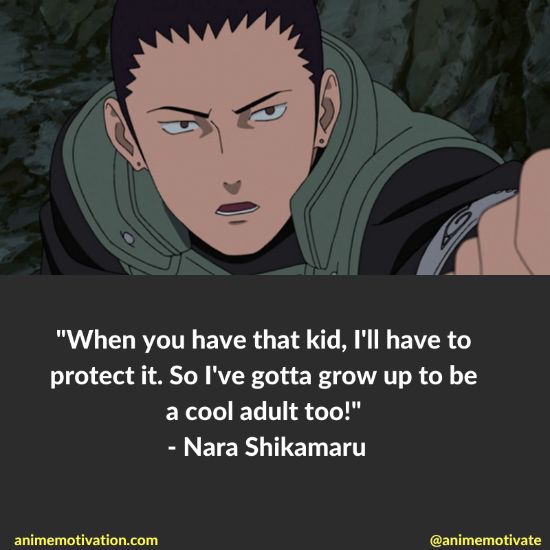 “When you have that kid, I’ll have to protect it. So I’ve gotta grow up to be a cool too!” – Nara Shikamaru 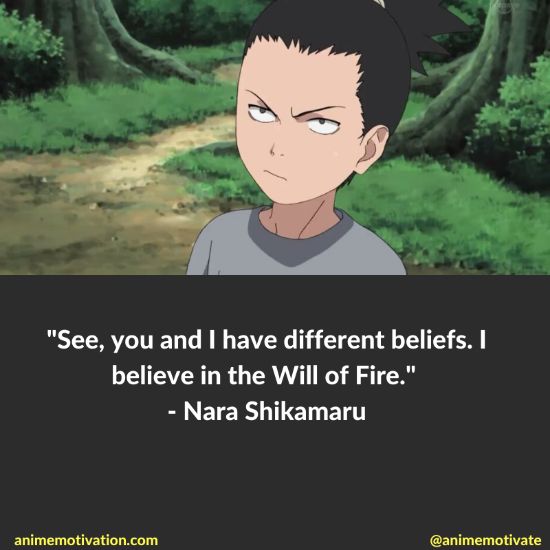 “See, you and I have different beliefs. I believe in the Will of Fire.” – Nara Shikamaru 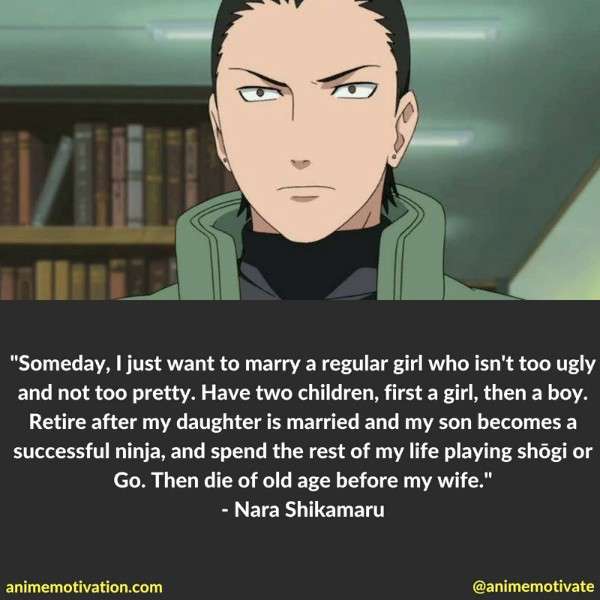 “Someday, I just want to marry a regular girl who isn’t too ugly and not too pretty. Have two children, first a girl, then a boy. Retire after my daughter is married and my son becomes a successful ninja, and spend the rest of my life playing shōgi or Go. Then die of old age before my wife.” – Nara Shikamaru 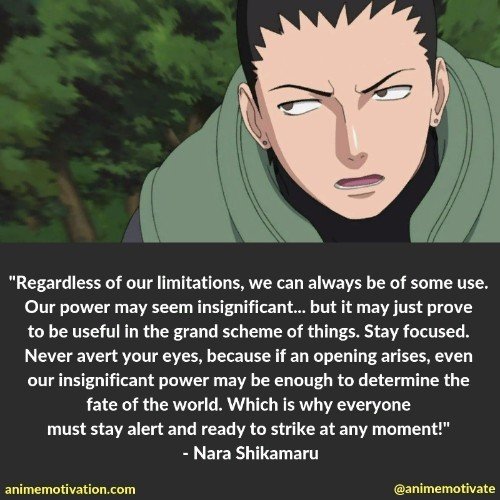 “Regardless of our limitations, we can always be of some use. Our power may seem insignificant… but it may just prove to be useful in the grand scheme of things. Stay focused. Never avert your eyes, because if an opening arises, even our insignificant power may be enough to determine the fate of the world. Which is why everyone must stay alert and ready to strike at any moment!” – Nara Shikamaru 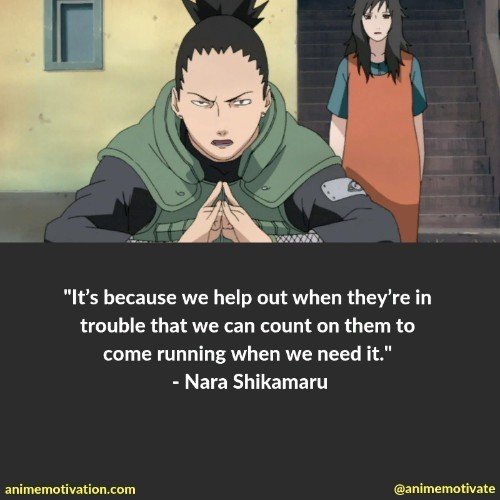 “It’s because we help out when they’re in trouble that we can count on them to come running when we need it.” – Nara Shikamaru 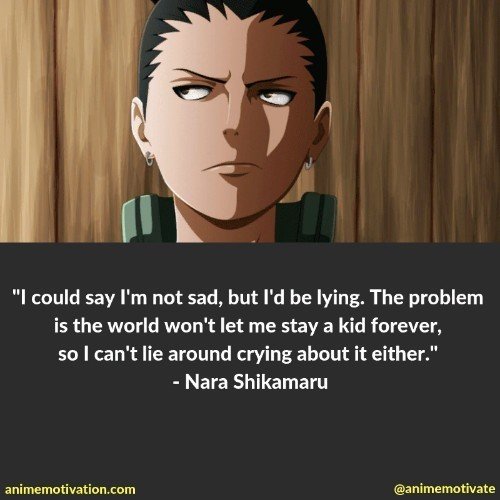 “I could say I’m not sad, but I’d be lying. The problem is the world won’t let me stay a kid forever, so I can’t lie around crying about it either.” – Nara Shikamaru 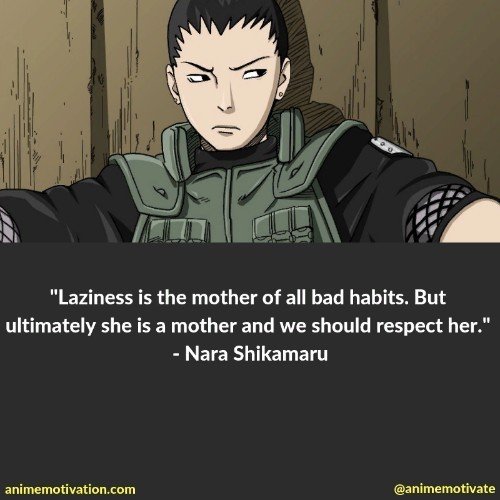 “Laziness is the mother of all bad habits. But ultimately she is a mother and we should respect her.” – Nara Shikamaru

19+ SMART Anime Characters You Should Know!