Anime is fatphobic, according to a minority of people on the internet.

Of course this mindset only applies to women and not men.

Given the amount of:

And gorgeous anime girls you see in , it’s no surprise some people are offended by it. And are now calling “fatphobic” as a result of their insecurities.

Certain things trigger people even if the thing itself isn’t trying to trigger the person who’s effected by it.

Japan, East Asia in general, Africa + Europe don’t have these issues. Hence why they’re not the ones who are angry at and the way characters are designed. 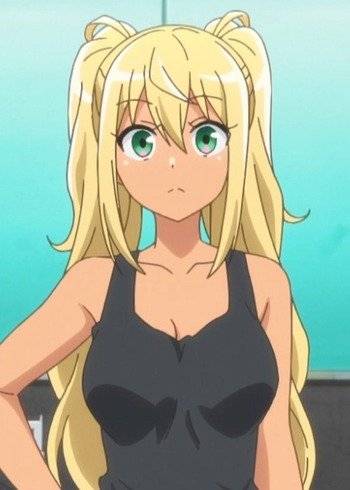 When you look at the actual source of who’s saying is fatphobic, and where it comes from, the WEST is predictably the culprit.

In the last 10 years we’ll say, more so 5 years, America in particular has invented more arbitrary words than most can keep up with.

A popular trend thanks to the internet is to add “phobia” to whatever word is either offensive, or that some people consider offensive to silence those who bring up the topic.

Or even to silence people who have preferences that make a certain group unhappy (preferring girls who are fit for example).

In some cases, this is used to cancel people on Twitter or social media in general.

Whether the “cancel” campaign succeeds or not is irrelevant. It’s about the action and what it means.

The case of being fatphobic, and why it exists:

I took different girls of different ages for a reason: all of them share similarities in spite of age difference.

Same is true with male characters in spite of age.

I also took characters from 2021 shows to make it more recent.

The average design, male or female, is that of a person who’s:

And anything that isn’t close to being overweight (or underweight by the way).

The depiction in the case of is accurate for a lot of reasons:

And the overwhelming majority of Japanese (even East Asian) has an average or a healthy weight by design.

That’s their culture. It’s also why they don’t have health issues associated with being overweight or otherwise.

Naturally this is gonna bleed into various shows and the designs that come with these shows. I mean, who wouldn’t depict their culture in the series they’re creating?

It’s logical and only makes sense to do it. 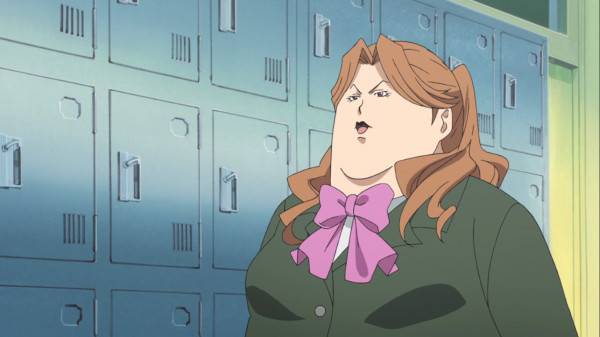 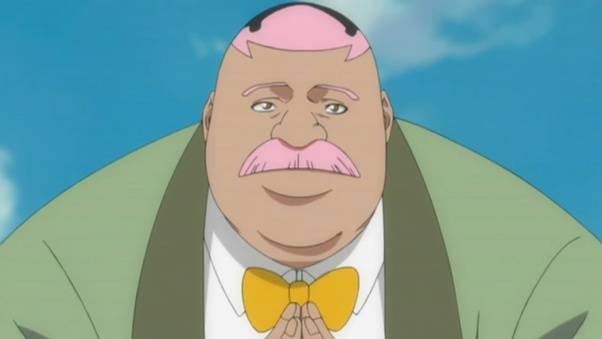 Every now and then, which isn’t common at all, will include characters who are overweight or even a form of obese.

Sometimes this will be shown in:

Or something along those lines. But it doesn’t happen for an obvious reason: it’s seen as unhealthy. Universally and scientifically.

Focusing strictly on Japan, even though isn’t used to promote positive images or even used to influence people, Japan doesn’t promote these body types in any of its media.

This is why you don’t and won’t see it in without reason. It’s not a reflection of their culture as it stands.

is entertainment before anything else anyway, so there’s that as well.

Does all of this make fatphobic?

First of all, what the F is fatphobia? Let’s start with this: the word itself isn’t official or real. Twitter created it.

For similarities sake, Wikipedia calls it “social stigma” and biases towards people who are overweight.

It can also be people who HATE others for being fat. That’s really what people mean when they throw the word around so carelessly on social media.

I say carelessly because it’s weaponized in situations where “hate” or discrimination isn’t the point.

That’s the problem though: anime NOT promoting fat characters doesn’t mean they HATE people who are overweight.

This distinction is important in the outrage, no context culture we’re living in today. A phobia is a fear by definition, so the term isn’t even an accurate description to start with.

It’s not as if the average or creator is disgusted by the thought of characters being fat, or they have a deep hatred for people who tip the scales a bit.

That would be an irrational thought, and even a baseless assumption. But understandable for someone who isn’t considered “fit” as their insecurities can make them feel victimized.

Relevant: Why Men Like Anime So Much, And Why It Matters 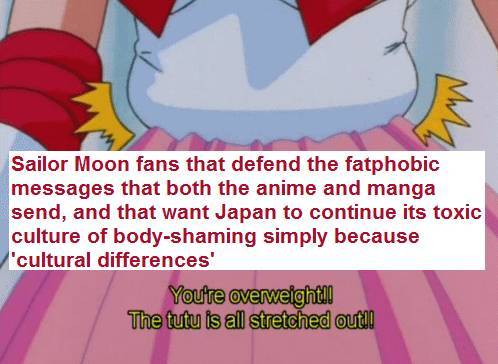 Now this image is obviously out of context because it doesn’t tell the full story (before and after). That said, the accusation is clear.

By implying the person is or has become overweight, with the extra comments pointing to the “Tutu”, some people have took issue with this old school series.

One thing they pointed out is “culture differences” not being an excuse in this scenario.

The problem with this argument is it’s like inventing a word for people who point out “you don’t look good in that outfit”, or “your **** is too small” or “real men are 6ft tall”.

The latter has been happening forever, yet no words have been invented to protect men from being insulted for their height.

Being called overweight, too small in height, a midget, or a general criticism might not feel nice, but it’s usually no more than just that. 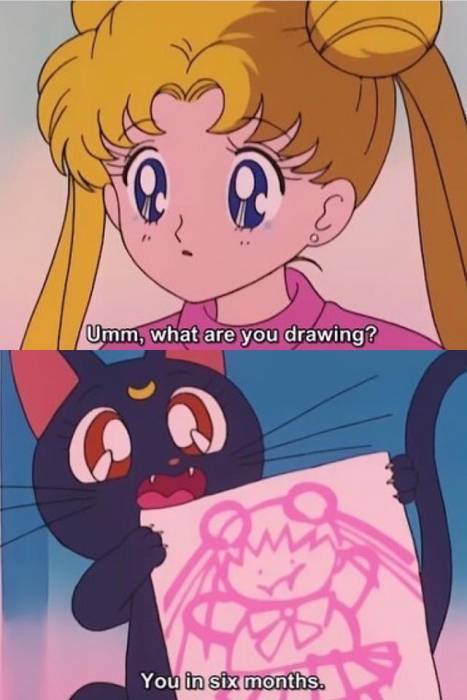 The context of this image is simple: Sailor Moon eats too much junk food and BS.

This leads Luna to draw an image of Sailor Moon (legitimately) in the series between 1995-2000. Implying if Sailor Moon continues to stuff her face she’ll be overweight in 6 months.

Is this fatphobic? Is this hateful? Or malicious? The answer is an obvious NO.

This is more sarcasm and dark humor than anything else. That’s why comedy is an art form appreciated by so many.

If we can’t laugh about serious issues from time to time, which seems to be impossible for this new coddled generation, how are we supposed to live stress free?

Obviously it’s not that simplistic and this one scene in Sailor Moon isn’t saying that, but it’s food for thought for those who outrage and scream about every little thing.

Especially when it comes to problems that aren’t problems, but are exaggerated to appear as if they’re legitimate problems when they’re not.

Not to mention people who take things out of context and invent their own narratives to control people they don’t like. 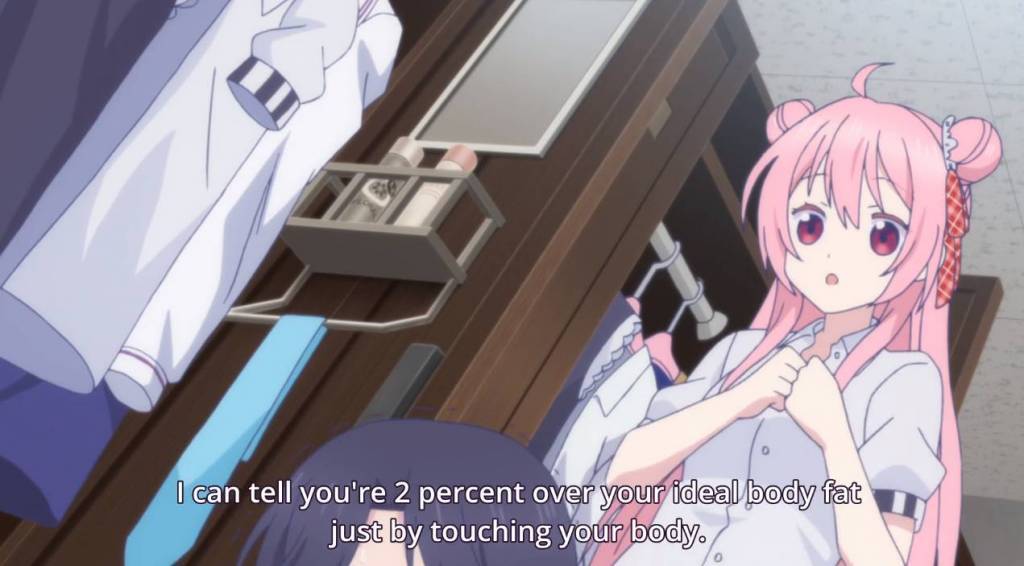 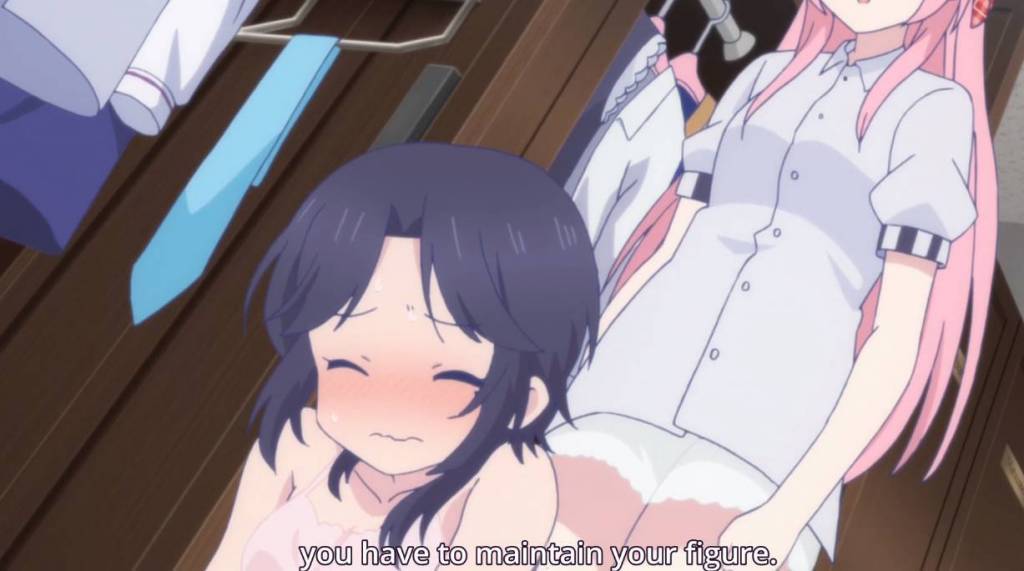 From memory, it happens in Happy Sugar Life. Meaning the issue of weight is brought up in conversation between Satou and Shoko.

In this scene, Satou Matsuzaka pinches her friend shoko by her skin. And then follows that up with criticism of her weight.

She then says if she wants a man, she’ll have to maintain her figure.

A feminist site claimed this was “fatphobic” at the time, but that’s about as much as I seen from anyone when talking about Happy Sugar Life.

Or whatever term you wanna throw in. Satou Matsuzaka is simply pointing out a fact that makes a segment of people in the west uncomfortable.

It triggers some people who are conscious about their weight, or are dealing with weight issues, or have been bullied for their weight in the past (understandable).

That said, It doesn’t make “fatphobic”.

Like a lot of crticisms in the west, labels are slapped onto so people can use it as a scapegoat.

Related: This Is Why Anime Characters Are So SKINNY With Perfect Bodies

An pin-up artist tweeted this back in 2019 about 3 different styles for the female anatomy.

Not surprisingly, controversy followed. And there was an all out attack for her “view” on female artistry.

She was labelled “fatphobic” by many people on Twitter. 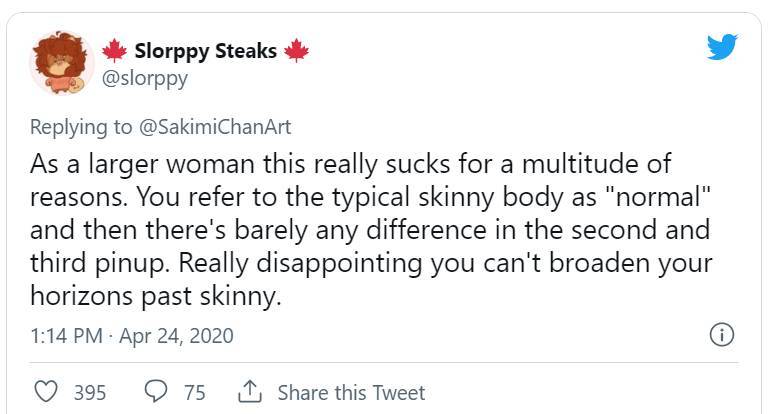 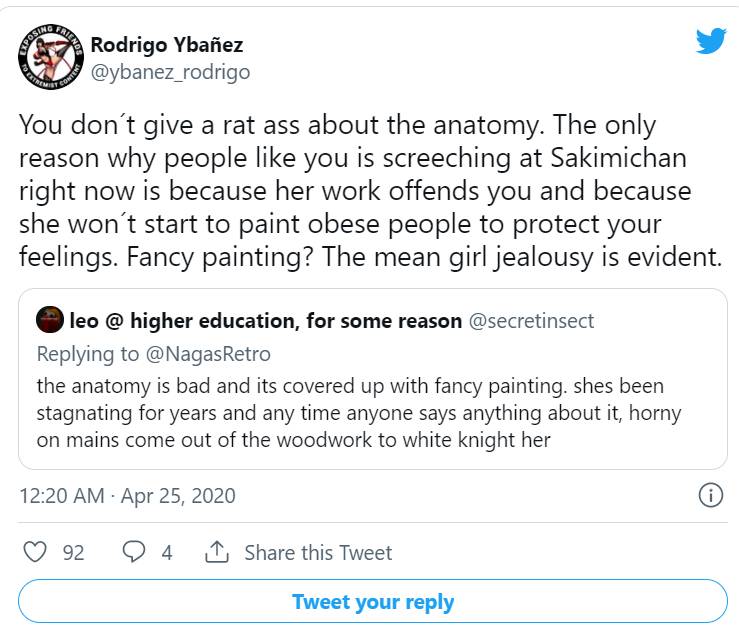 As you can see from the VERY first Tweet by Sakimichan, she wasn’t being anything of the sort.

She just shared something unrelated.

It was the Twitter mob who attacked her without hesitation.

Some even promoted “bullying” Sakimichan because they felt offended by something that had no connection to their feelings.

is a medium and has been for years.

With its popularity growing everyday, and the gorgeous depictions of its characters (especially women), some women in real life feel attacked.

The reality is though it’s not personal on ‘s part. Neither is it fatphobic outside of scenarios where it’s intentional.

No different to how isn’t inherently sexist for celebrating female characters or making them sexy.

25+ Anime Boys & Girls Who Are Skilled In Martial Arts