BNA (Brand New Animal) is an series by Studio Trigger. Released in 2020.

The highlights discrimination,, navigating through a world that judges you, and other meaningful topics.

This is what gives the quotes their flavor and sometimes, relatability. 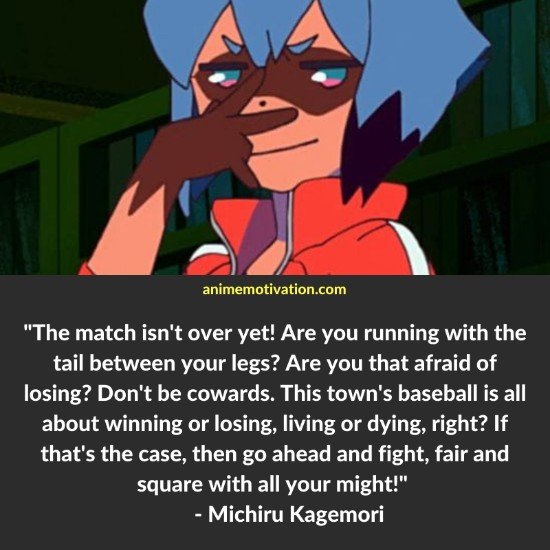 “The match isn’t over yet! Are you running with the tail between your legs? Are you that afraid of losing? Don’t be cowards. This town’s baseball is all about winning or losing, living or dying, right? If that’s the case, then go ahead and fight, fair and square with all your might!” – Michiru Kagemori 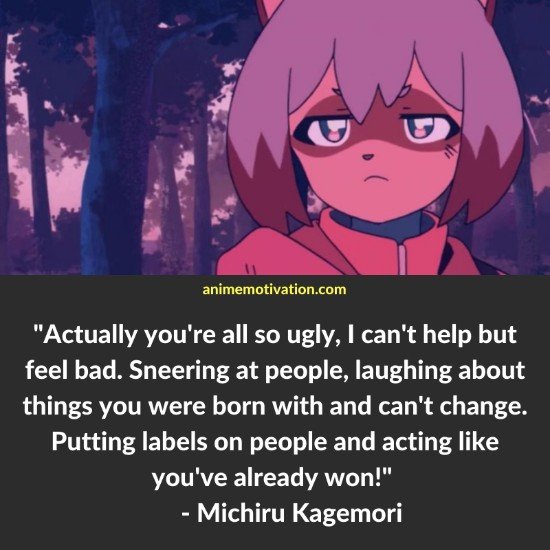 “Actually you’re all so ugly, I can’t help but feel bad. Sneering at people, laughing about things you were born with and can’t change. Putting labels on people and acting like you’ve already won!” – Michiru Kagemori 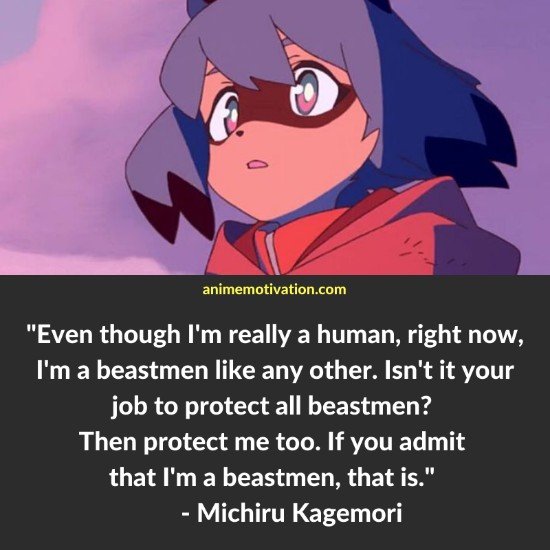 “Even though I’m really a human, right now, I’m a beastmen like any other. Isn’t it your job to protect all beastmen? Then protect me too. If you admit that I’m a beastmen, that is.” – Michiru Kagemori 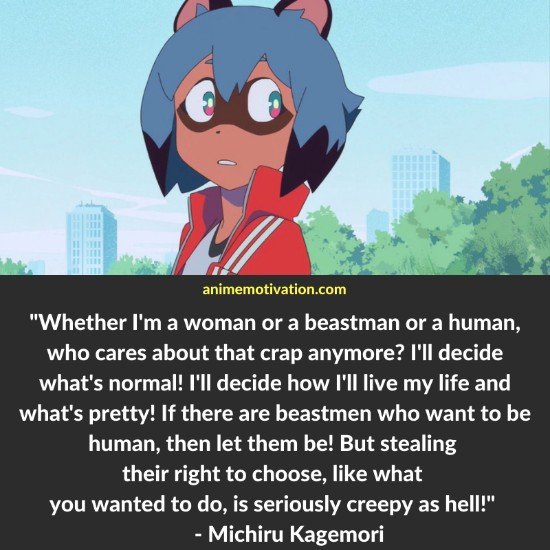 “Whether I’m a woman or a beastman or a human, who cares about that crap anymore? I’ll decide what’s normal! I’ll decide how I’ll live my life and what’s pretty! If there are beastmen who want to be human, then let them be! But stealing their right to choose, like what you wanted to do, is seriously creepy as hell!” – Michiru Kagemori 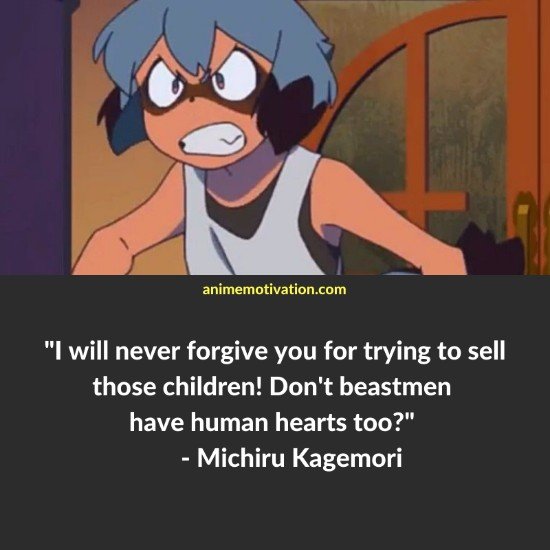 “I will never forgive you for trying to sell those children! Don’t beastmen have human hearts too?” – Michiru Kagemori 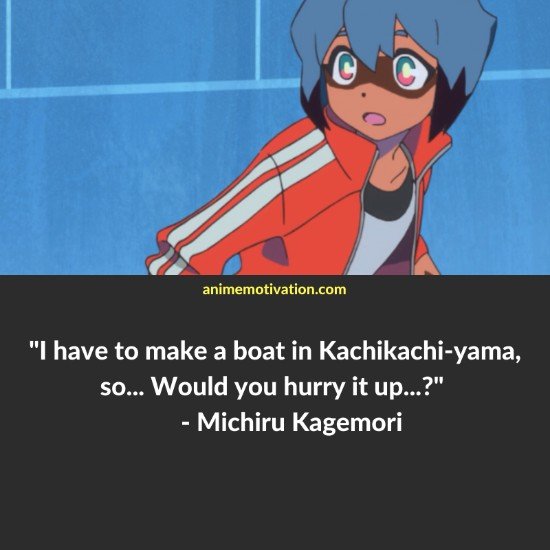 “I have to make a boat in Kachikachi-yama, so… Would you hurry it up…?” – Michiru Kagemori 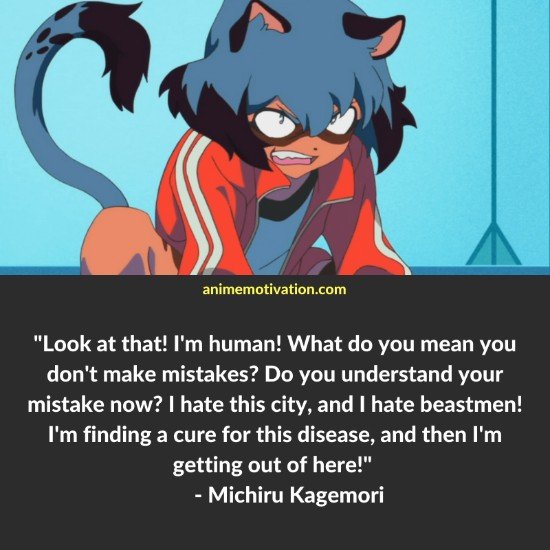 “Look at that! I’m human! What do you mean you don’t make mistakes? Do you understand your mistake now? I hate this city, and I hate beastmen! I’m finding a cure for this disease, and then I’m getting out of here!” – Michiru Kagemori 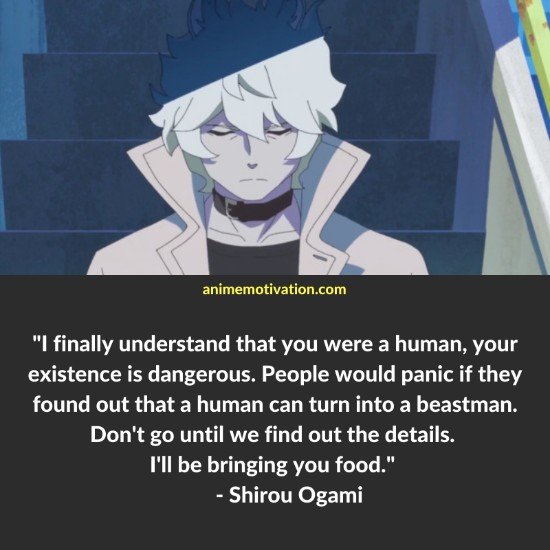 “I finally understand that you were a human, your existence is dangerous. People would panic if they found out that a human can turn into a beastman. Don’t go until we find out the details. I’ll be bringing you food.” – Shirou Ogami 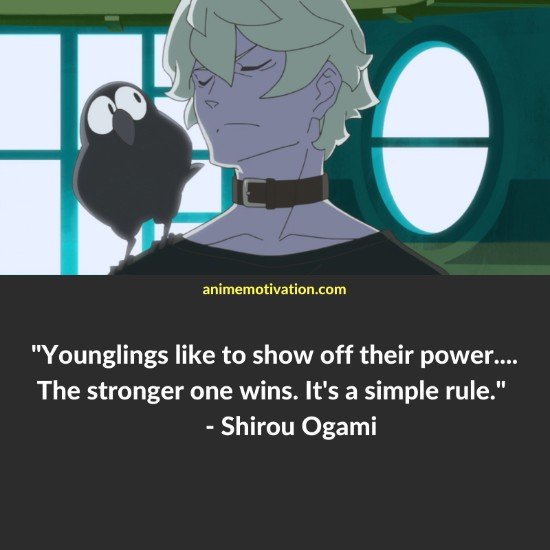 “Younglings like to show off their power…. The stronger one wins. It’s a simple rule.” – Shirou Ogami 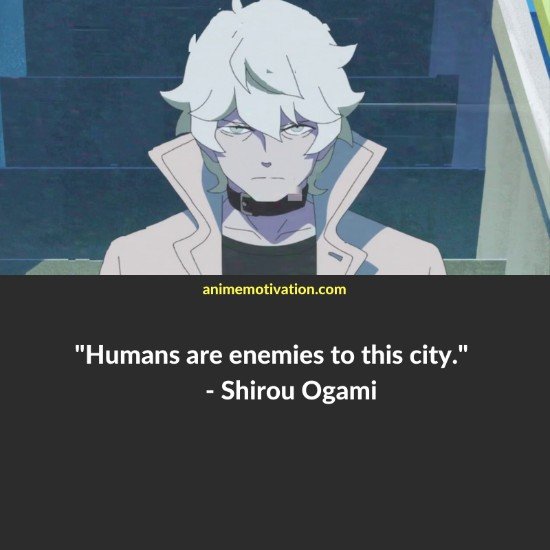 “Humans are enemies to this city.” – Shirou Ogami 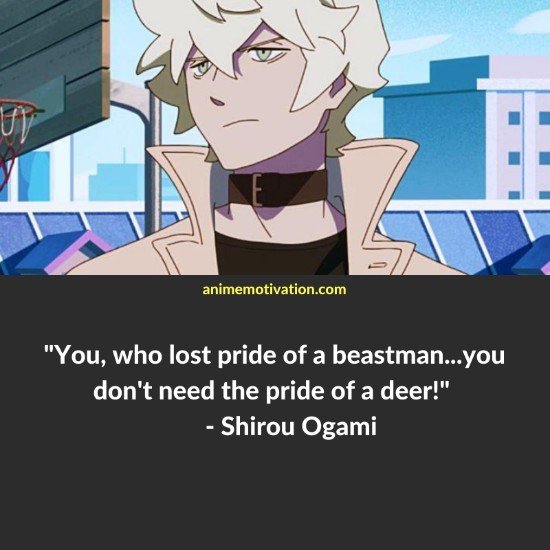 “You, who lost pride of a beastman…you don’t need the pride of a deer!” – Shirou Ogami 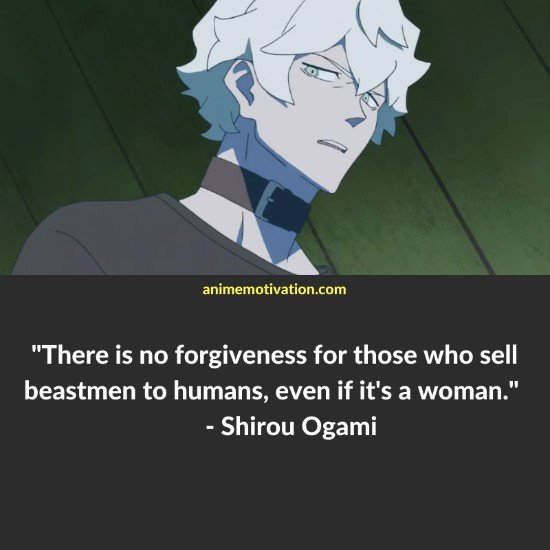 “There is no forgiveness for those who sell beastmen to humans, even if it’s a woman.” – Shirou Ogami 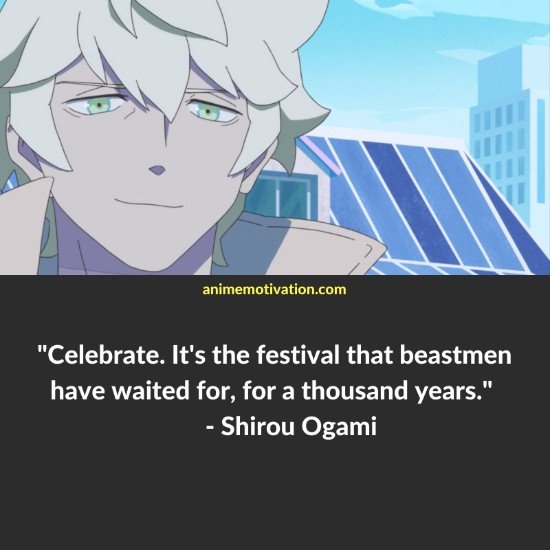 “Celebrate. It’s the festival that beastmen have waited for, for a thousand years.” – Shirou Ogami 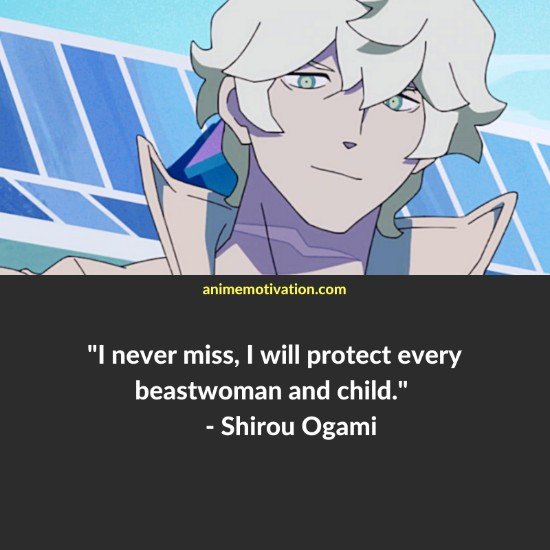 “I never miss, I will protect every beastwoman and child.” – Shirou Ogami 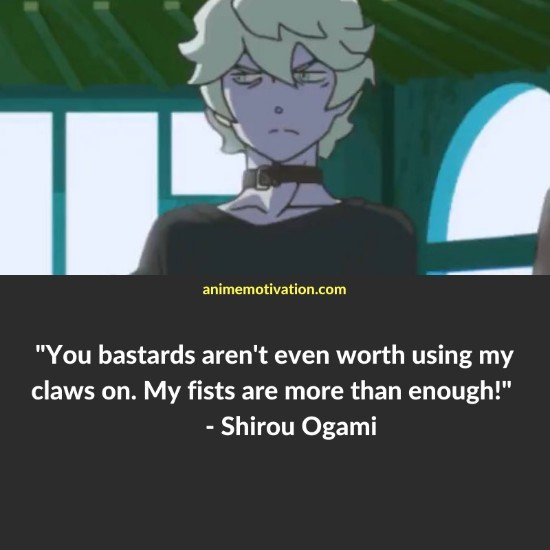 “You b*stards aren’t even worth using my claws on. My fists are more than enough!” – Shirou Ogami 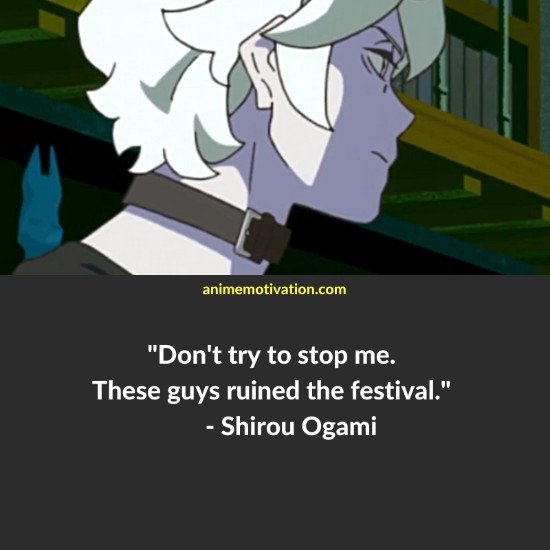 “Don’t try to stop me. These guys ruined the festival.” – Shirou Ogami 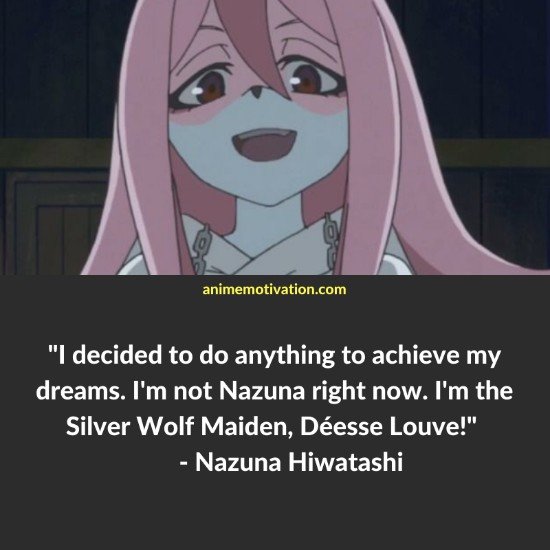 “I decided to do anything to achieve my dreams. I’m not Nazuna right now. I’m the Silver Wolf Maiden, Déesse Louve!” – Nazuna Hiwatashi 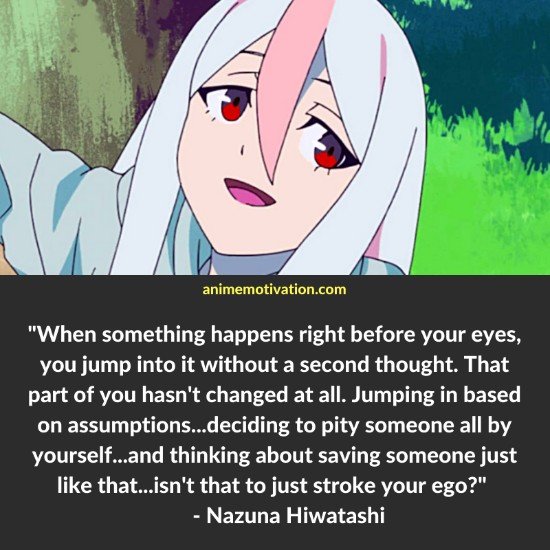 “When something happens right before your eyes, you jump into it without a second thought. That part of you hasn’t changed at all. Jumping in based on assumptions…deciding to pity someone all by yourself…and thinking about saving someone just like that…isn’t that to just stroke your ego?” – Nazuna Hiwatashi 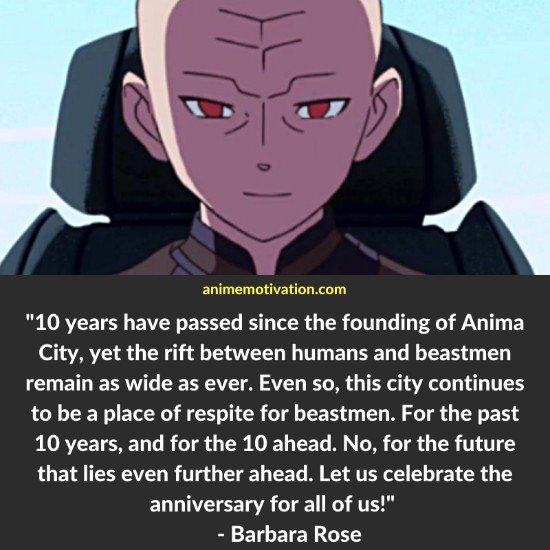 “10 years have passed since the founding of Anima City, yet the rift between humans and beastmen remain as wide as ever. Even so, this city continues to be a place of respite for beastmen. For the past 10 years, and for the 10 ahead. No, for the future that lies even further ahead. Let us celebrate the anniversary for all of us!” – Barbara Rose 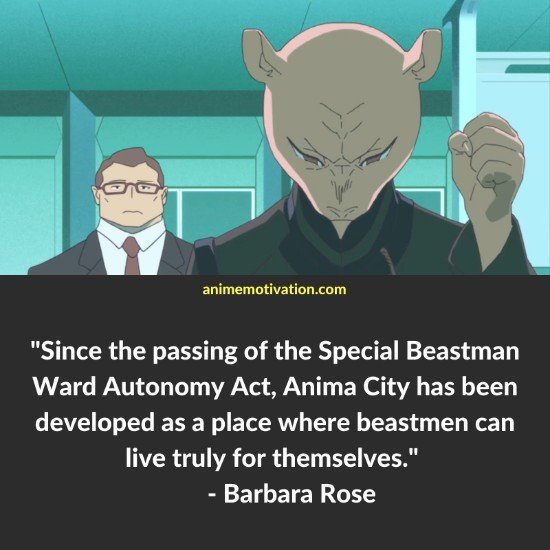 “Since the passing of the Special Beastman Ward Autonomy Act, Anima City has been developed as a place where beastmen can live truly for themselves.” – Barbara Rose

A Collection Of The BEST Quotes From Fire Force

31+ Of The Best Anime Quotes About Anger And Frustration

Good job, keep it up and upload post more regularly. We like this and need more and more!!!! ¡! ¡!