Your Lie In April characters mentioned in this post:

Your Lie In April is a musical series with an emotional twist. Unlike shows like K-On that are lighthearted.

If it’s quotes with “impact” that you want, here are some of the best lines to help you relate.

The Best Your Lie In April Quotes: 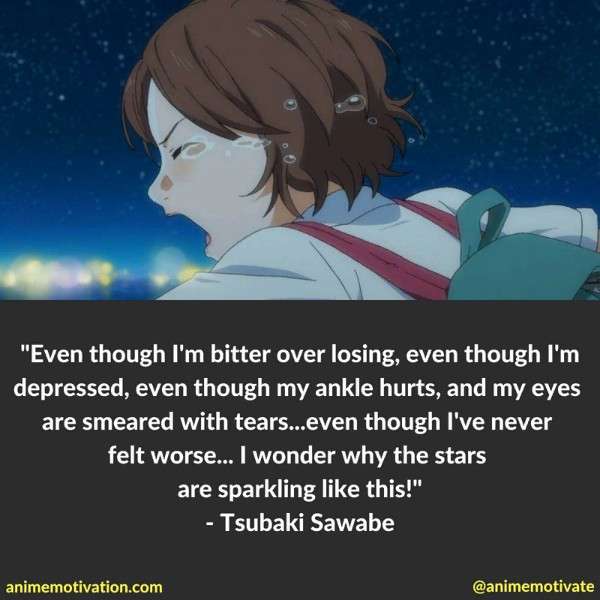 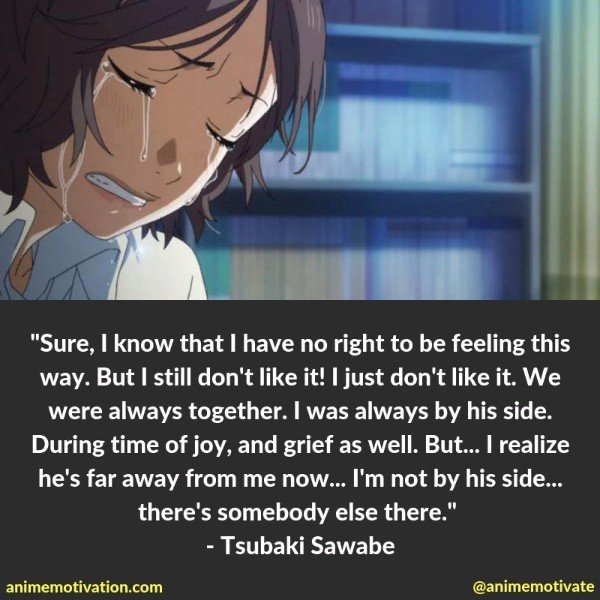 “Sure, I know that I have no right to be feeling this way. But I still don’t like it! I just don’t like it. We were always together. I was always by his side. During time of joy, and grief as well. But…I realize he’s far away from me now… I’m not by his side…there’s somebody else there.” – Tsubaki Sawabe 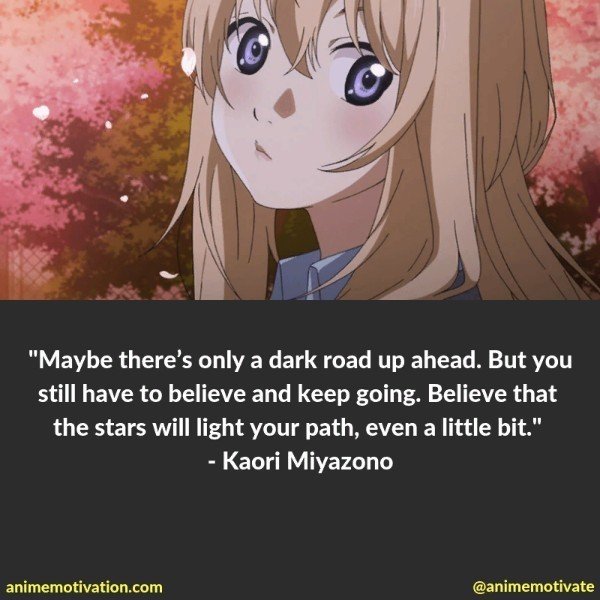 “Maybe there’s only a dark road up ahead. But you still have to believe and keep going. Believe that the stars will light your path, even a little bit.” – Kaori Miyazono 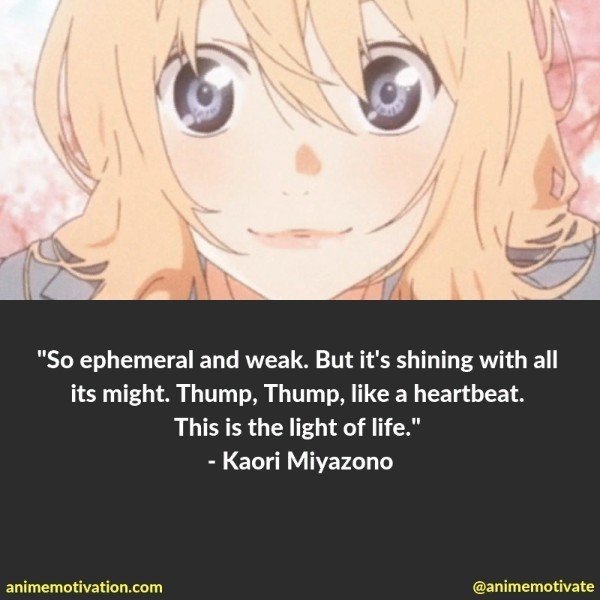 “So ephemeral and weak. But it’s shining with all its might. Thump, Thump, like a heartbeat. This is the light of life.” – Kaori Miyazono 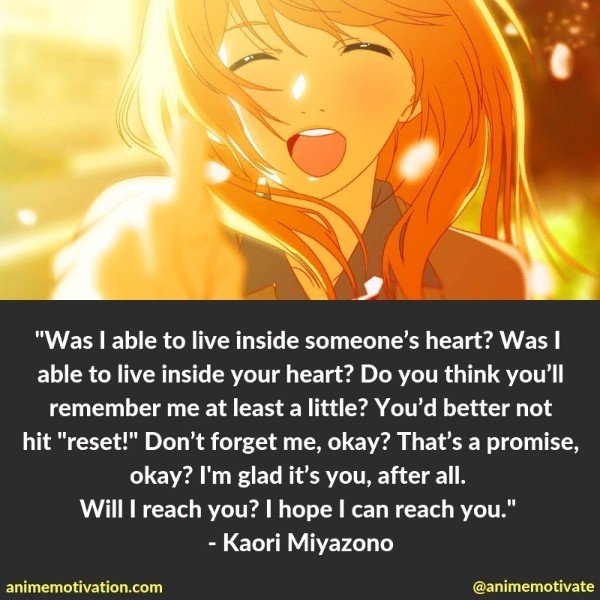 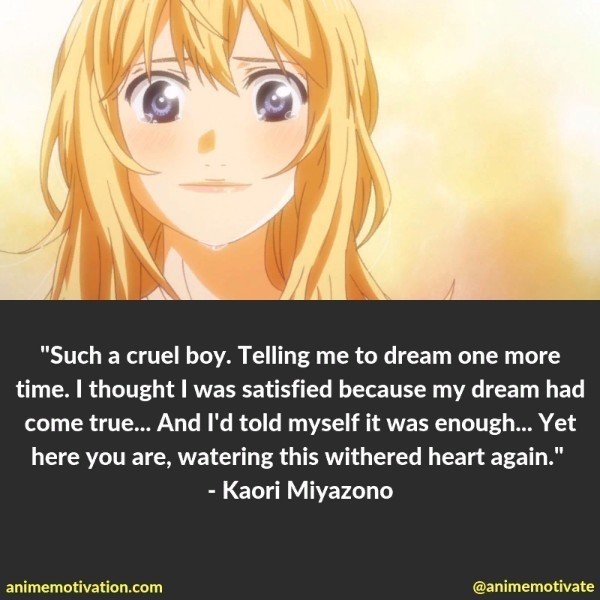 “Such a cruel boy. Telling me to dream one more time. I thought I was satisfied because my dream had come true… And I’d told myself it was enough… Yet here you are, watering this withered heart again.” – Kaori Miyazono 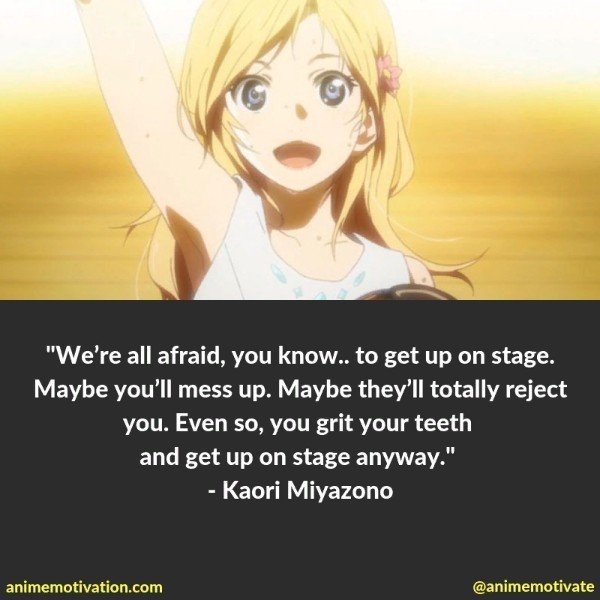 “We’re all afraid, you know.. to get up on stage. Maybe you’ll mess up. Maybe they’ll totally reject you. Even so, you grit your teeth and get up on stage anyway.” – Kaori Miyazono 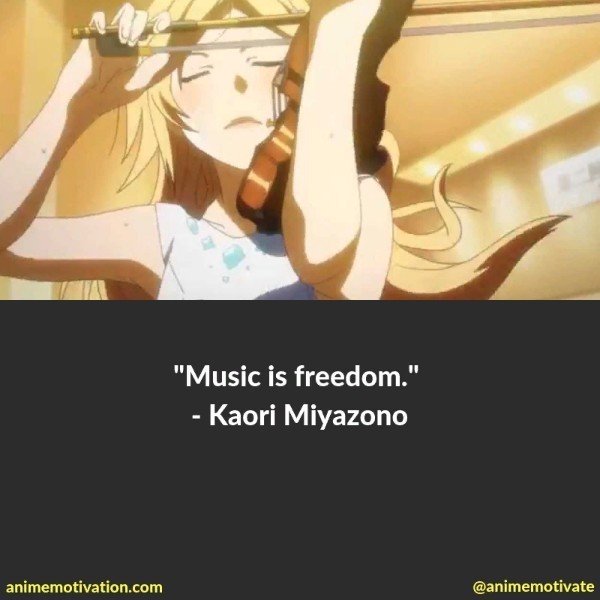 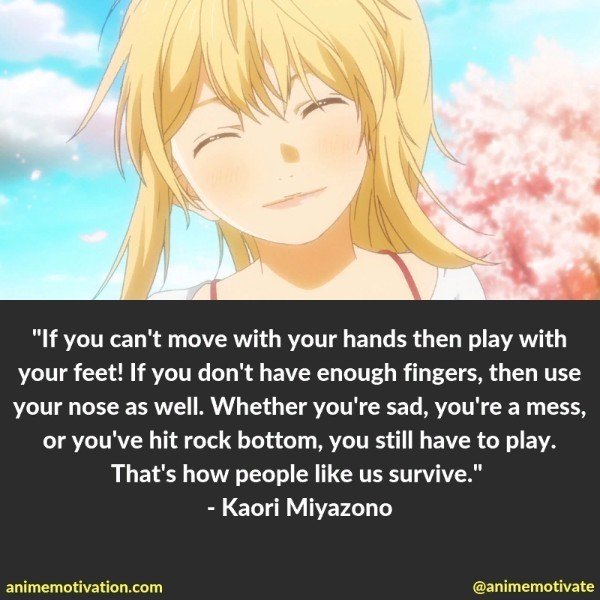 “If you can’t move with your hands then play with your feet! If you don’t have enough fingers, then use your nose as well. Whether you’re sad, you’re a mess, or you’ve hit rock bottom, you still have to play. That’s how people like us survive.” – Kaori Miyazono 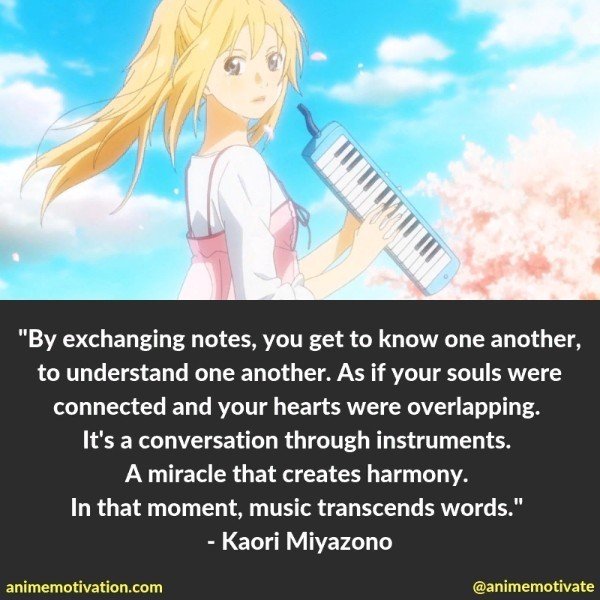 “By exchanging notes, you get to know one another, to understand one another. As if your souls were connected and your hearts were overlapping. It’s a conversation through instruments. A miracle that creates harmony. In that moment, transcends words.” – Kaori Miyazono “Setbacks are inevitable to superstars. Adversity is what separates the good from the great. After all, stars can only shine during the night.” – Watari Ryota 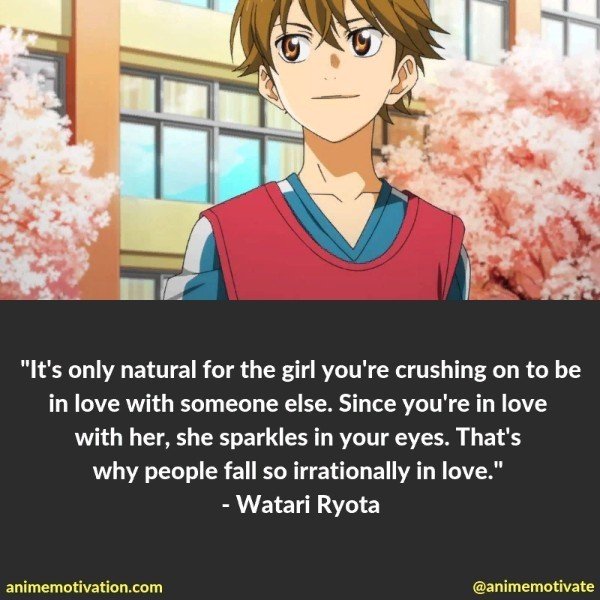 “It’s only natural for the girl you’re crushing on to be in love with someone else. Since you’re in love with her, she sparkles in your eyes. That’s why people fall so irrationally in love.”  – Watari Ryota 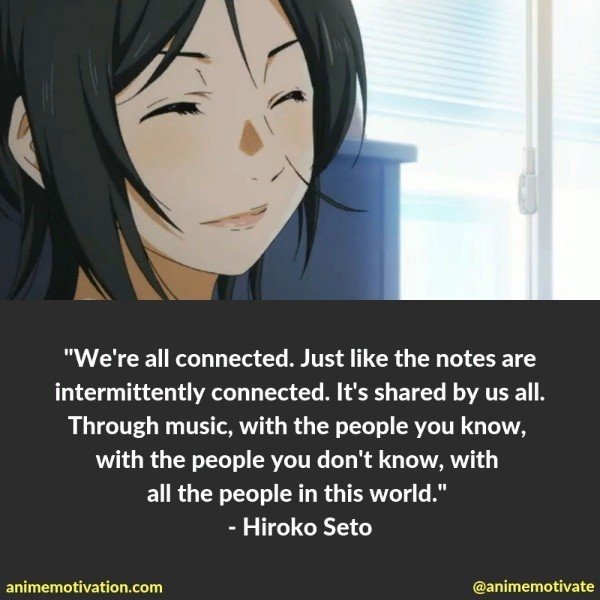 “Defiance toward parents is an establishment of one’s self; it’s a sign of independence.” – Hiroko Seto 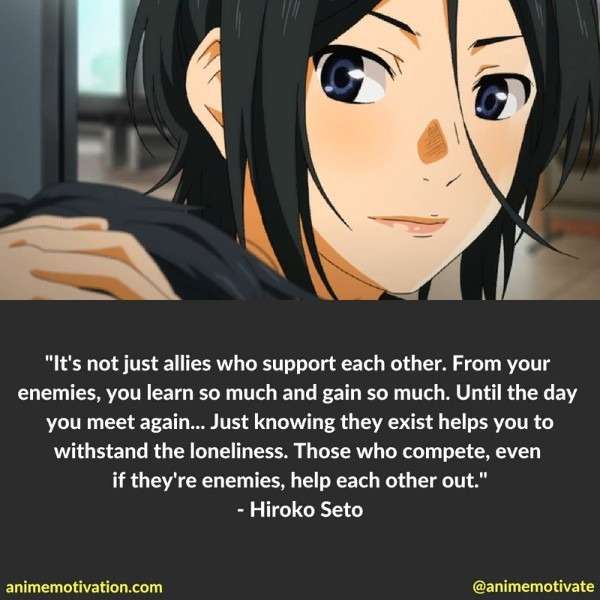 “It’s not just allies who support each other. From your enemies, you learn so much and gain so much. Until the day you meet again… Just knowing they exist helps you to withstand the loneliness. Those who compete, even if they’re enemies, help each other out.” – Hiroko Seto 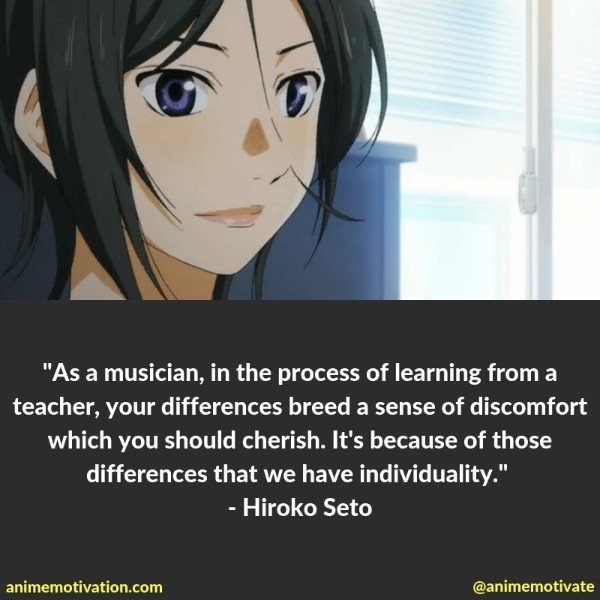 “As a musician, in the process of learning from a teacher, your differences breed a sense of discomfort which you should cherish. It’s because of those differences that we have individuality.” – Hiroko Seto 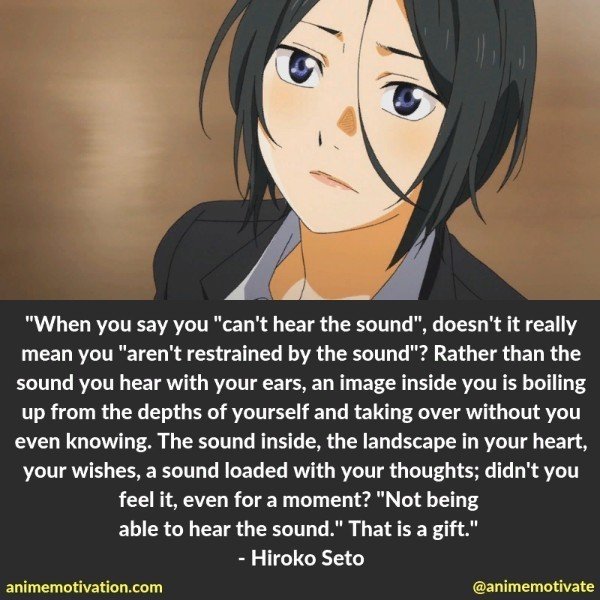 “When you say you “can’t hear the sound”, doesn’t it really mean you “aren’t restrained by the sound”? Rather than the sound you hear with your ears, an image inside you is boiling up from the depths of yourself and taking over without you even knowing. The sound inside, the landscape in your heart, your wishes, a sound loaded with your thoughts; didn’t you feel it, even for a moment? “Not being able to hear the sound.” That is a gift.” – Hiroko Seto 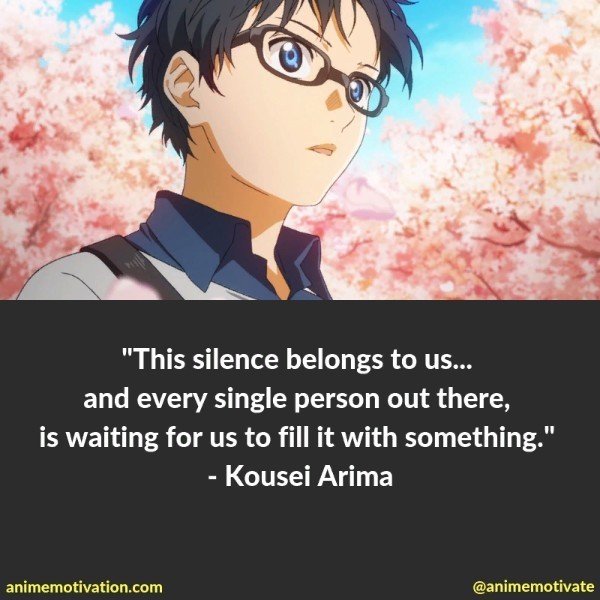 “This silence belongs to us… and every single person out there, is waiting for us to fill it with something.” – Kousei Arima 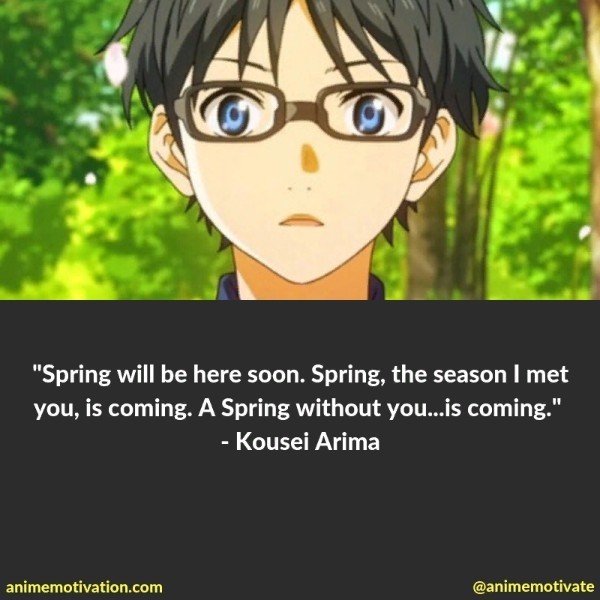 “Spring will be here soon. Spring, the season I met you, is coming. A Spring without you…is coming.” – Kousei Arima 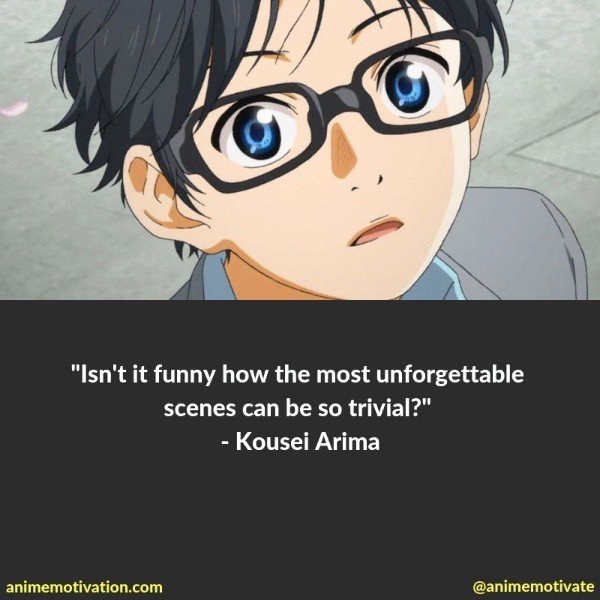 “Isn’t it funny how the most unforgettable scenes can be so trivial?” – Kousei Arima 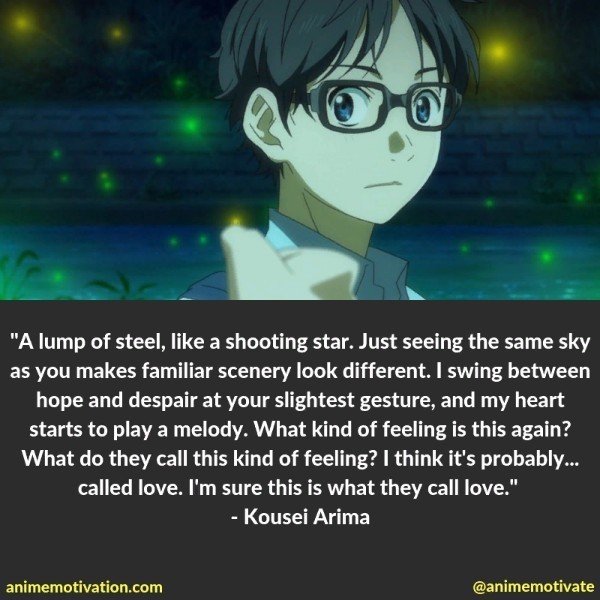 “A lump of steel, like a shooting star. Just seeing the same sky as you makes familiar scenery look different. I swing between hope and despair at your slightest gesture, and my heart starts to play a melody. What kind of feeling is this again? What do they call this kind of feeling? I think it’s probably… called love. I’m sure this is what they call love.” – Kousei Arima 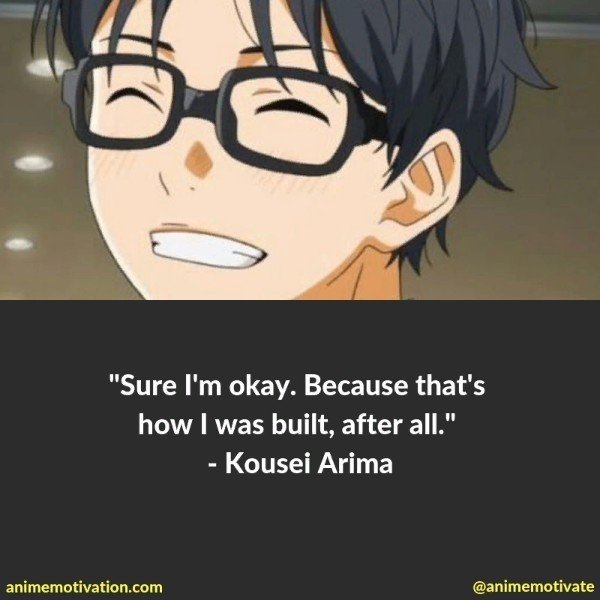 “Sure I’m okay. Because that’s how I was built, after all.” – Kousei Arima 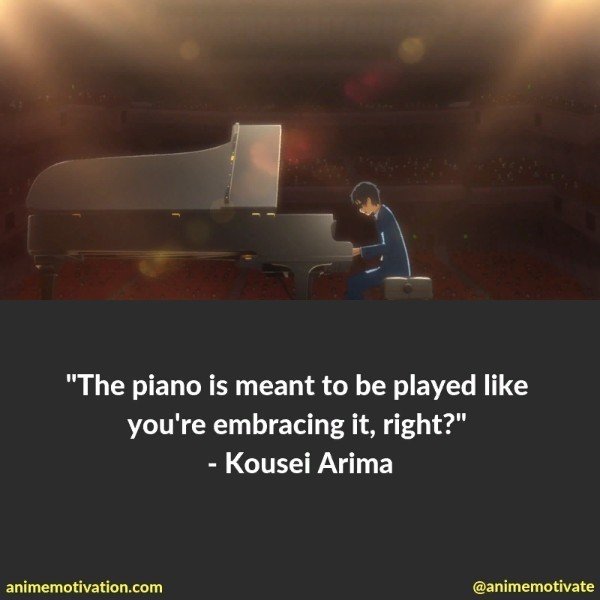 “The piano is meant to be played like you’re embracing it, right?” – Kousei Arima 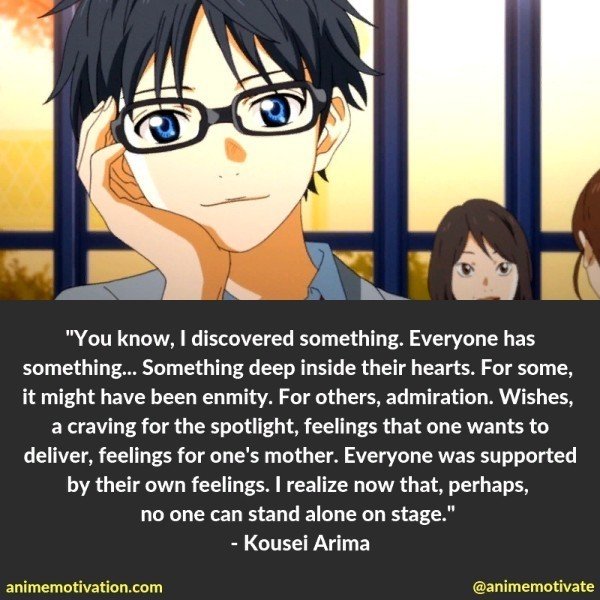 “You know, I discovered something. Everyone has something… Something deep inside their hearts. For some, it might have been enmity. For others, admiration. Wishes, a craving for the spotlight, feelings that one wants to deliver, feelings for one’s mother. Everyone was supported by their own feelings. I realize now that, perhaps, no one can stand alone on stage.” – Kousei Arima “You’re like a cat. If I get close, you’ll ignore me and go far away. If I get hurt, you’ll play around to share the pain.” – Kousei Arima 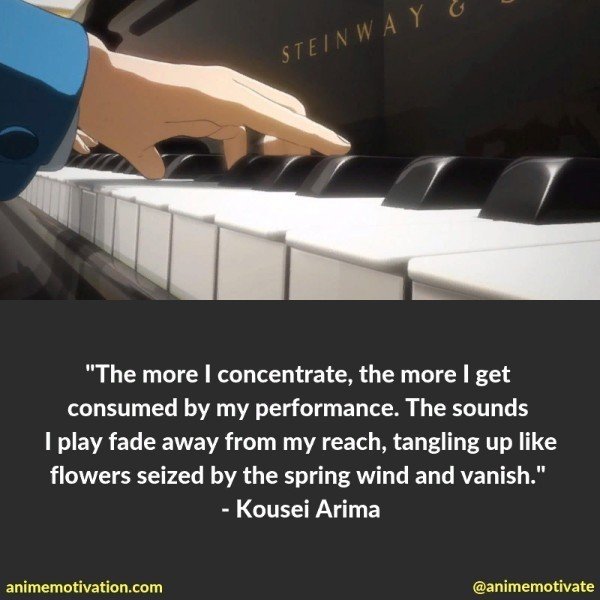 “The more I concentrate, the more I get consumed by my performance. The sounds I play fade away from my reach, tangling up like flowers seized by the spring wind and vanish.” – Kousei Arima 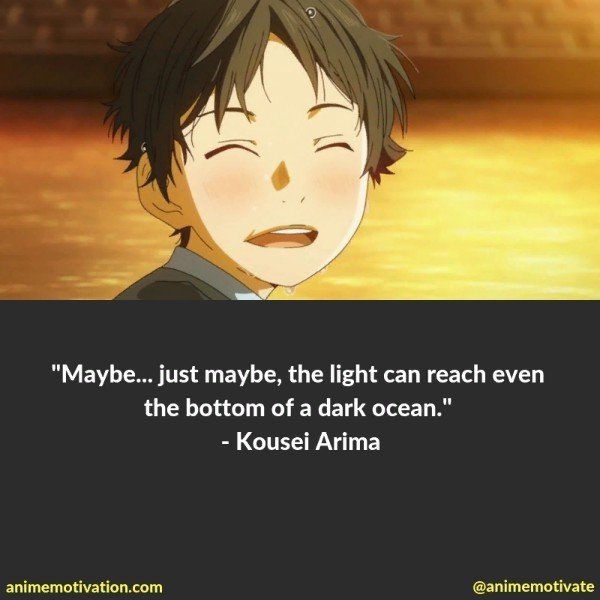 “Maybe… just maybe, the light can reach even the bottom of a dark ocean.” – Kousei Arima 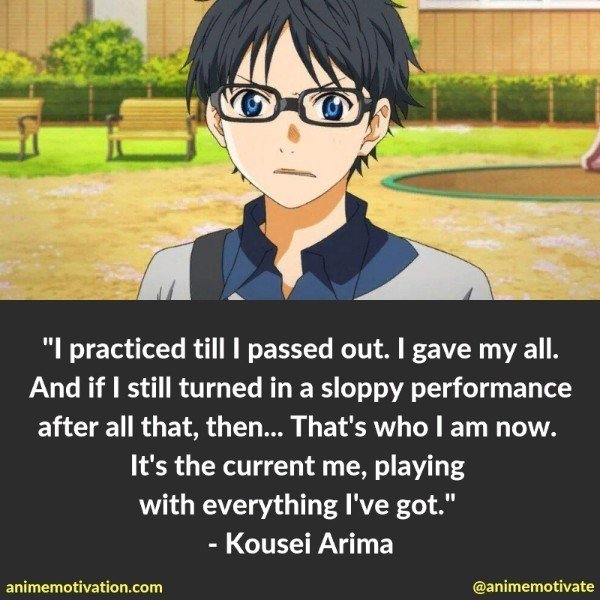 “I practiced till I passed out. I gave my all. And if I still turned in a sloppy performance after all that, then… That’s who I am now. It’s the current me, playing with everything I’ve got.” – Kousei Arima 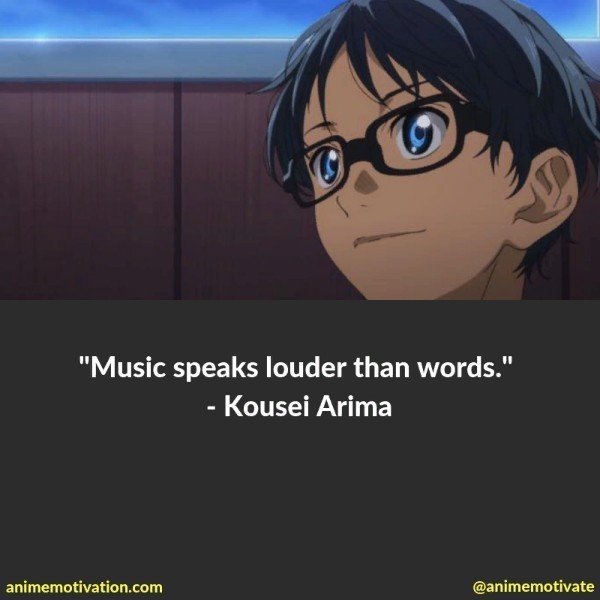