With her bright orange hair, just like Ichigo, she stands out and is differentiated by design alone.

As a sensitive, empathetic character, she plays a the role of support and does a good job of it with her powers.

Her journey of self confidence, dealing with insecurities, and more is reflected in her quotes and the things you can learn from her role.

Here’s the best lines from this BLEACH character! 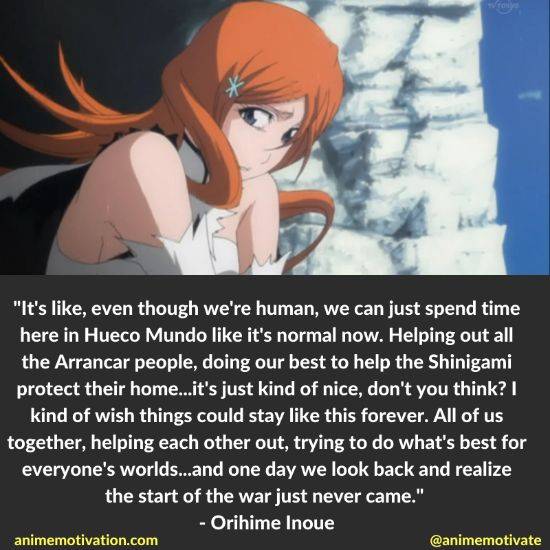 “It’s like, even though we’re human, we can just spend time here in Hueco Mundo like it’s normal now. Helping out all the Arrancar people, doing our best to help the Shinigami protect their home…it’s just kind of nice, don’t you think? I kind of wish things could stay like this forever. All of us together, helping each other out, trying to do what’s best for everyone’s worlds…and one day we look back and realize the start of the war just never came.” – Orihime Inoue 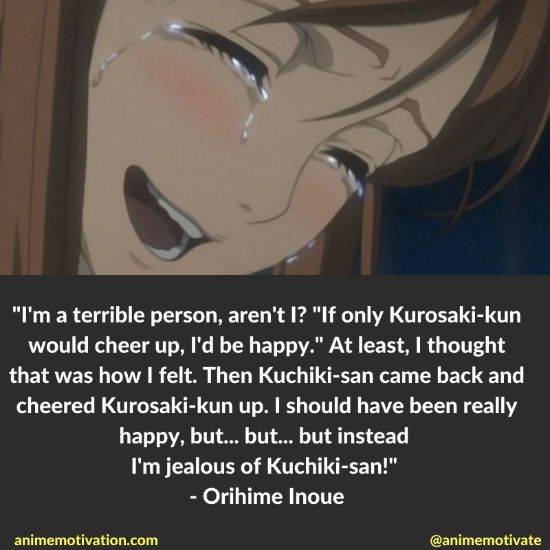 “I’m a terrible person, aren’t I? “If only Kurosaki-kun would cheer up, I’d be happy.” At least, I thought that was how I felt. Then Kuchiki-san came back and cheered Kurosaki-kun up. I should have been really happy, but… but… [starts to cry] but instead I’m jealous of Kuchiki-san!” – Orihime Inoue 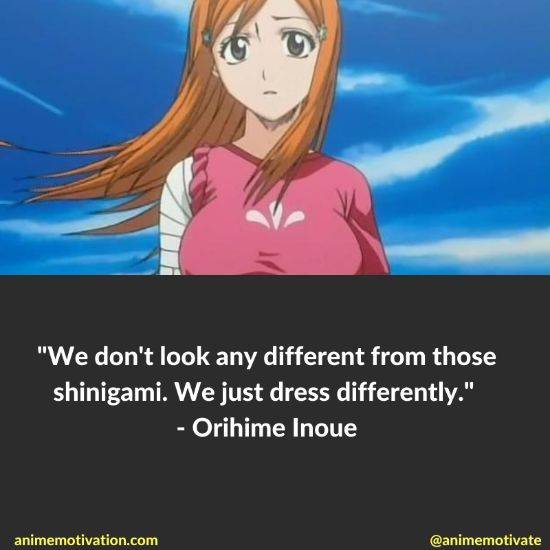 “We don’t look any different from those shinigami. We just dress differently.” – Orihime Inoue

“I was proud of my hair color that my brother admired. I was happy to be told such things, so I grew my hair out ever since I was little. Soon after I entered middle school, 3rd years said they didn’t like my hair color and cut it. I had no choice but to cut the rest short to even it out. I couldn’t tell brother.’I felt like changing it’, is what I said to dodge the question. Then my brother died soon after. I became alone. I stopped talking, even at school, and became more alone than ever before. The one who stopped me from being that way was Tatsuki-chan. Tatsuki-chan yelled at me for backing down and she looked out for me. I could grow my hair out again thanks to her. I will never have short hair again, because my long hair is proof of my faith in Tatsuki-chan.” – Orihime Inoue

“If I were the rain, that binds together the heavens and the earth, whom in all eternity will never mingle, would I be able to bind two hearts together?” – Orihime Inoue

“I don’t care about “subtle”. If you don’t want to get hurt, then don’t attack until I say it’s all right.” – Orihime Inoue

“Thank you, Tatsuki. Please do not worry, Tatsuki. Because Tatsuki will come find me, that’s why I can go anywhere without worry. If the place I’m going is somewhere Tatsuki can’t go, then please wait for me here, I will come back for sure. Come back to Tatsuki’s side.” – Orihime Inoue

“I don’t believe that he showed me the Hōgyoku because he trusts me… but, at least I have learned the location of the Hōgyoku… and… about my own power, too. Everything that has occurred… it reverses it all, and destroys the very event itself. Thank you, Kurosaki-kun, for coming to save me, but I’ve found something I must do here. And it’s definitely…something only I can do. With my power… I will return the Hōgyoku to before it ever existed!” – Orihime Inoue 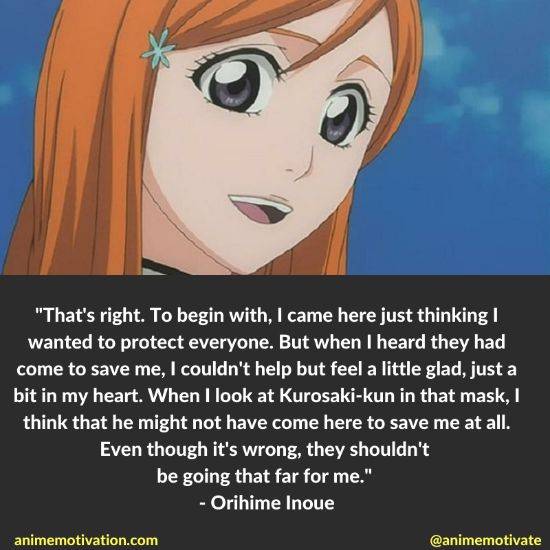 “That’s right. To begin with, I came here just thinking I wanted to protect everyone. But when I heard they had come to save me, I couldn’t help but feel a little glad, just a bit in my heart. When I look at Kurosaki-kun in that mask, I think that he might not have come here to save me at all. Even though it’s wrong, they shouldn’t be going that far for me.” – Orihime Inoue

“I will not forgive those who hurt Tatsuki!” – Orihime Inoue 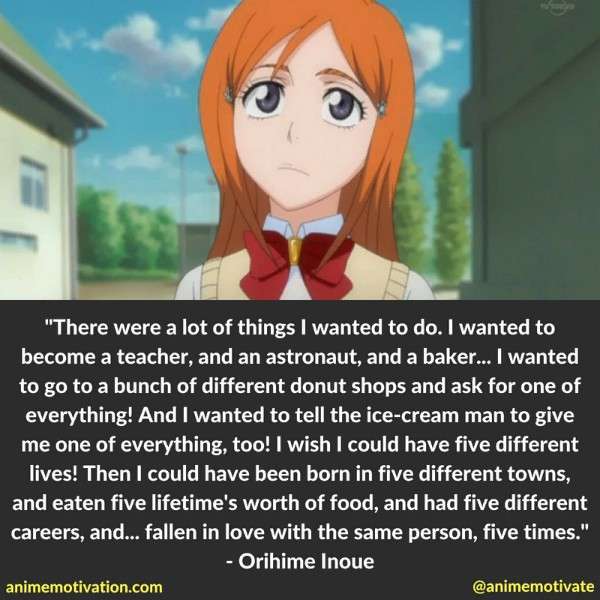 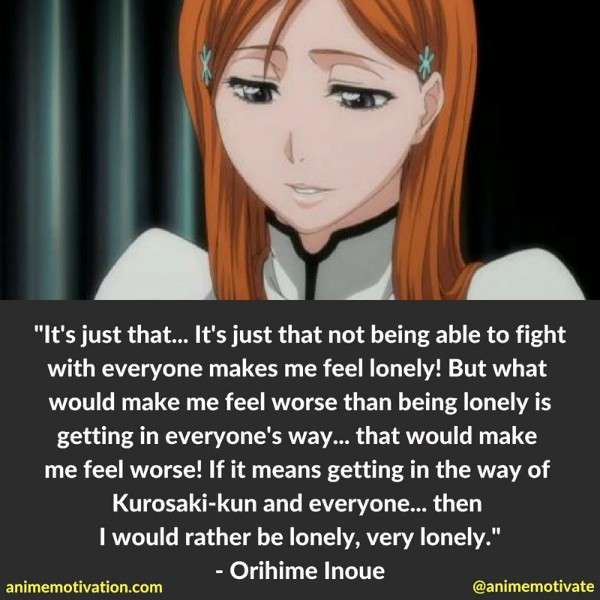 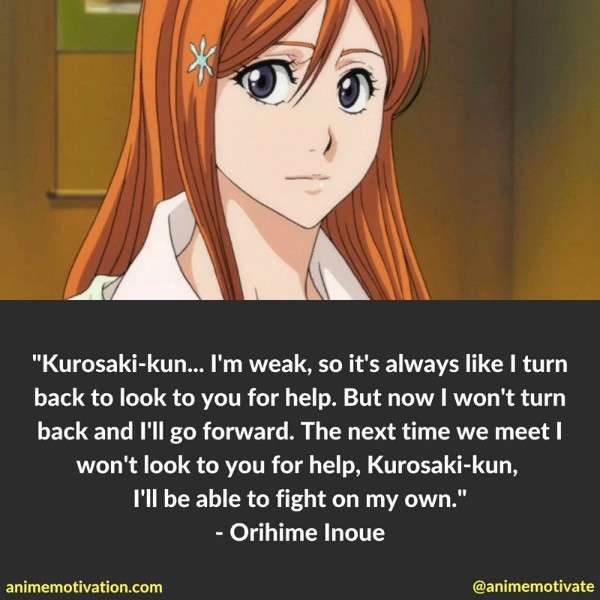 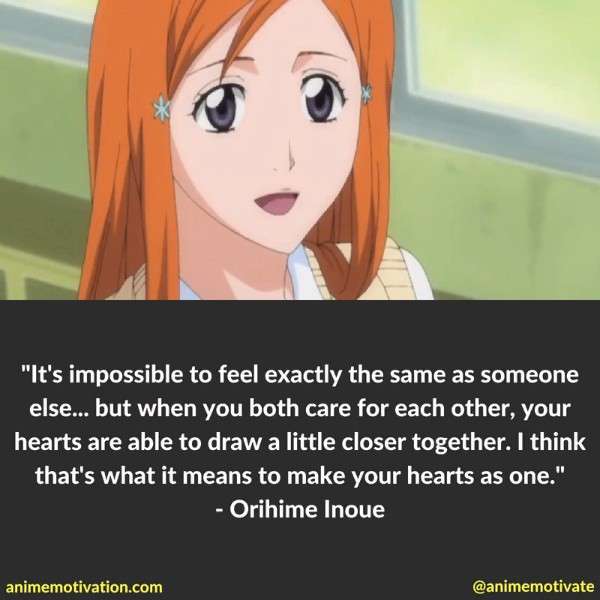 “It’s impossible to feel exactly the same as someone else… but when you both care for each other, your hearts are able to draw a little closer together. I think that’s what it means to make your hearts as one.” – Orihime Inoue 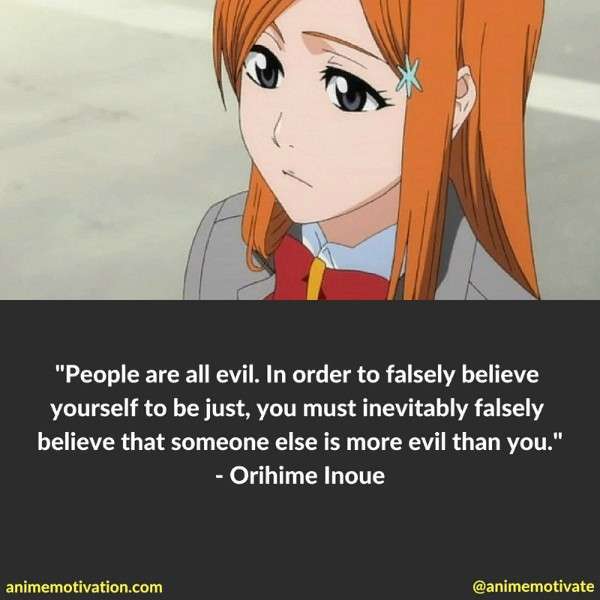 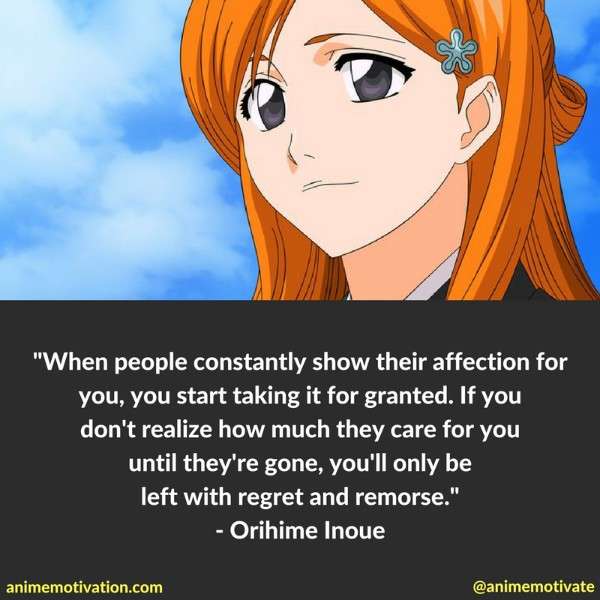 “When people constantly show their affection for you, you start taking it for granted. If you don’t realize how much they care for you until they’re gone, you’ll only be left with regret and remorse.” – Orihime Inoue