Friendship means different things to different people. And has friendship life lessons for all of it.

In general – is stacked with life lessons, even in the silliest and dumbest type of series.

There’s always something to learn if you’re willing.

Let’s use My Bride Is A Mermaid as an example.

The one life lesson you can take from this is: don’t expect your girlfriends Dad to ever accept you.

Nagasumi Michishio goes through this hard lesson over and over again.

I’ll be using quotes for every point to make it more relevant.

1. Friends aren’t always there to support you 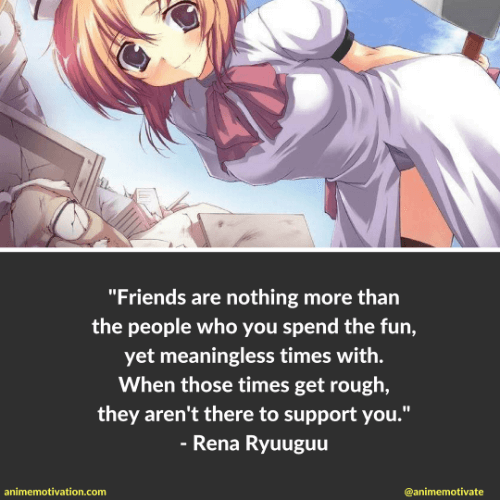 “Friends are nothing more than the people who you spend the fun, yet meaningless times with. When those times get rough, they aren’t there to support you.” – Rena Ryuugu

Just like the quote says from Higurashi – sometimes friends are nothing more than people you have “fun” with.

A lot of those friends disappear when sh*t gets real or when your life turns upside down. Whether it’s your health, wealth, your life’s in danger or something else.

They’re only around when it’s convenient (unless they’re real friends).

2. Real friends don’t use you 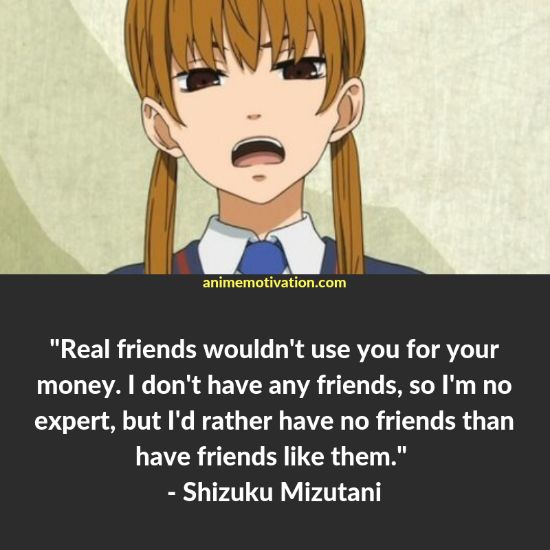 “Real friends wouldn’t use you for your . I don’t have any friends, so I’m no expert, but I’d rather have no friends than friends like them.” – Shizuku Mizutani

I’d rather have NO friends than fake friends.

This is a true statement you’ll only realize after the fact.

Real friends don’t use you in a way that’s negative, abusive, manipulative and to your own detriment. In a case like that they’re just using you for personal gain, and don’t really give a F about “friendship”. 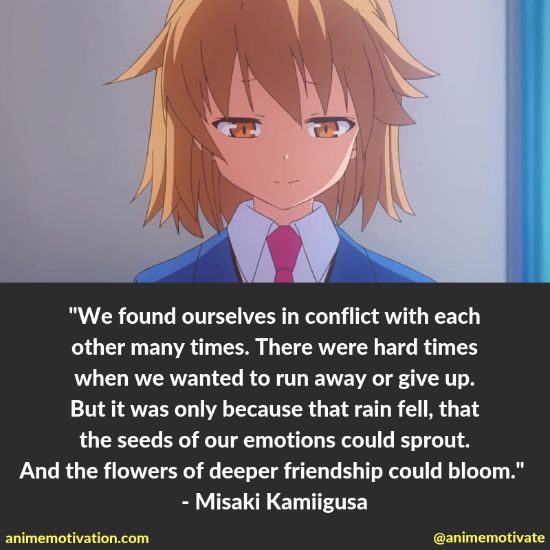 “We found ourselves in conflict with each other many times. There were hard times when we wanted to run away or give up. But it was only because that rain fell, that the seeds of our emotions could sprout. And the flowers of deeper friendship could bloom.” – Misaki Kamiigusa

When you break it down – this quote from Pet Girl Sakurasou is about the process of friendship. And how things take time.

Sometimes that means going through a little BS, hardships, arguments, annoyances and other things that usually tear people away.

But in the end that makes the relationship more powerful. 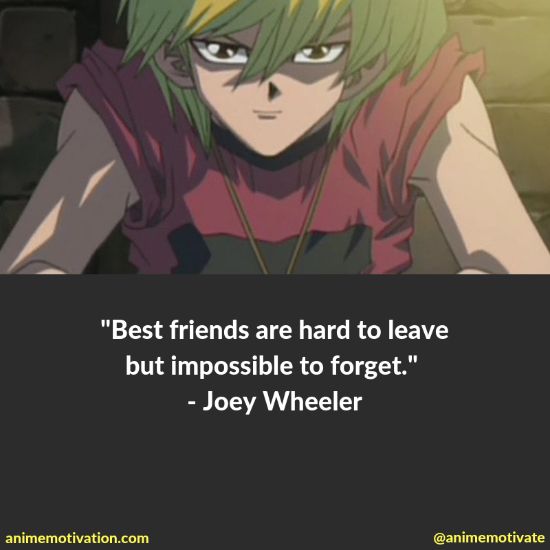 “Best friends are hard to leave but impossible to forget.” – Joey Wheeler

Having a good friend is like having a good relationship. You’ll never forget it once it’s over.

Going back to point #1 – some so-called “friends” don’t reach that point because they’re not real in the first place.

And it’s not until it’s too late that they realize what they’ve missed out on. All because they were disingenuous or disloyal.

5. You don’t die for your friends, you live for them 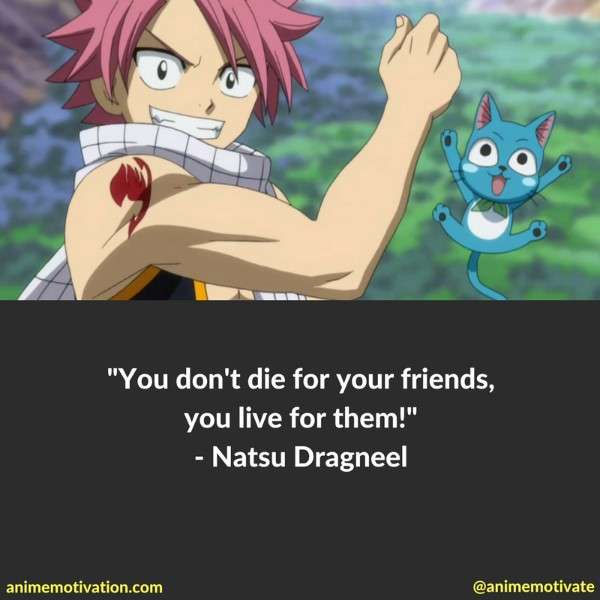 “You don’t die for your friends, you live for them.” – Natsu Dragneel

Dying seems like a loyal thing to do. Even a thing of honor, respect and admiration. But the reality is if the situation doesn’t need it, and it’s not necessary – it’s a dumb choice.

A choice that will only cause more harm than good.

Living for your friends or anyone you care about is the best thing you can do for them, and vice versa.

Related: 16 Anime Quotes About Death That Will Make You Think

6. Making friends can be challenging 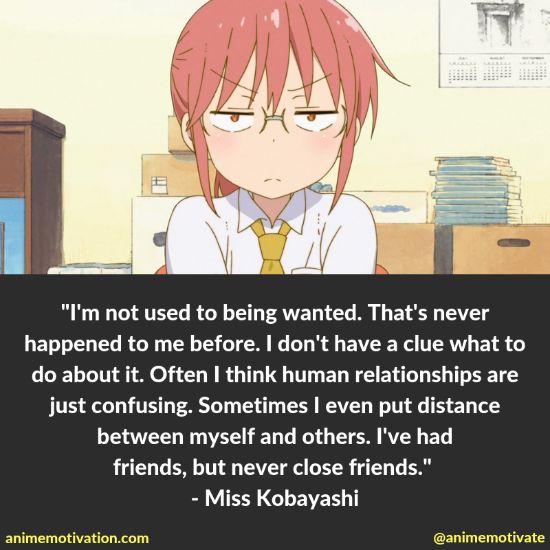 “I’m not used to being wanted. That’s never happened to me before. I don’t have a clue what to do about it. Often I think human relationships are just confusing. Sometimes I even put distance between myself and others. I’ve had friends, but never close friends.” – Miss Kobayashi

Friendship and the process of making friends isn’t simple for everyone.

Some people are introverts, others more extroverted. And in between all that is your personality, experiences and more that shapes your behaviour.

That’s why it’s hard for some people to get “close” to someone because of past experiences (see point #1 or #2).

Sometimes it comes down to a person’s confidence and ability to trust you, because they might not trust themselves.

Friendships and relationships are complicated, and that makes it challenging for some.

7. Friendship starts with being honest 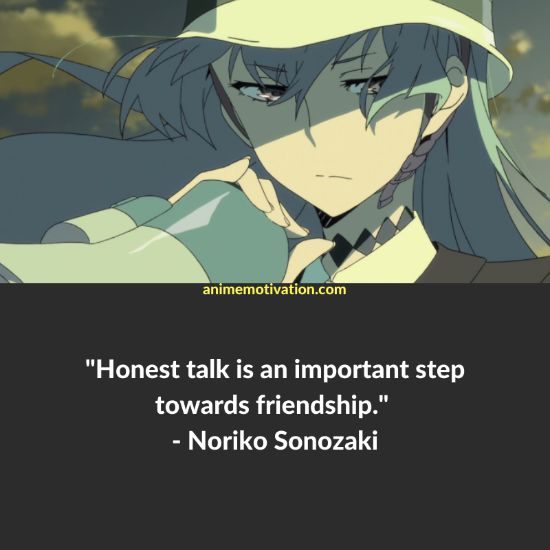 “Honest talk is an important step towards friendship.” – Noriko Sonozaki

It doesn’t get any simpler than that. If you’re dishonest, you’ll have a hard time befriending anyone.

Lying through your teeth will only bite you in the you know what down the line.

8. Not all friendships are meant to last 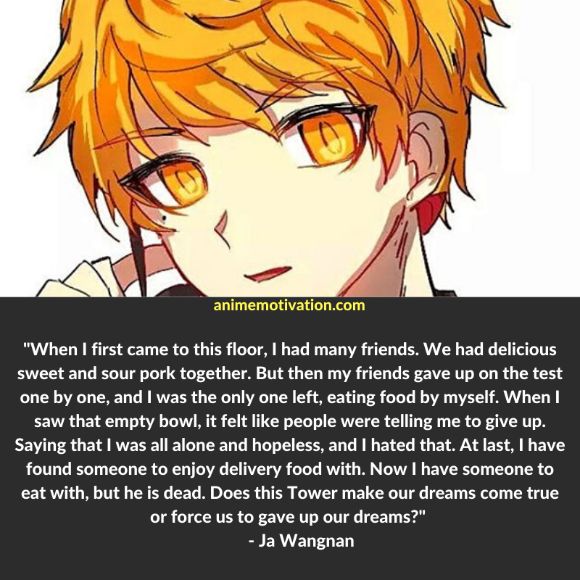 “When I first came to this floor, I had many friends. We had delicious sweet and sour pork together. But then my friends gave up on the test one by one, and I was the only one left, eating food by myself. When I saw that empty bowl, it felt like people were telling me to give up. Saying that I was all alone and hopeless, and I hated that. At last, I have found someone to enjoy delivery food with. Now I have someone to eat with, but he is dead. Does this Tower make our dreams come true or force us to gave up our dreams?” – Ja Wangnan

An extreme example, but true regardless.

We’re not on the same wavelength. And some don’t see success and other things the way I do.

Naturally – when this happens you’ll both go your own separate ways. Or in the case of this quote – they’ll quit, and you’ll be the only one left to go after what you want.

9. Having no friends is NOT a bad thing 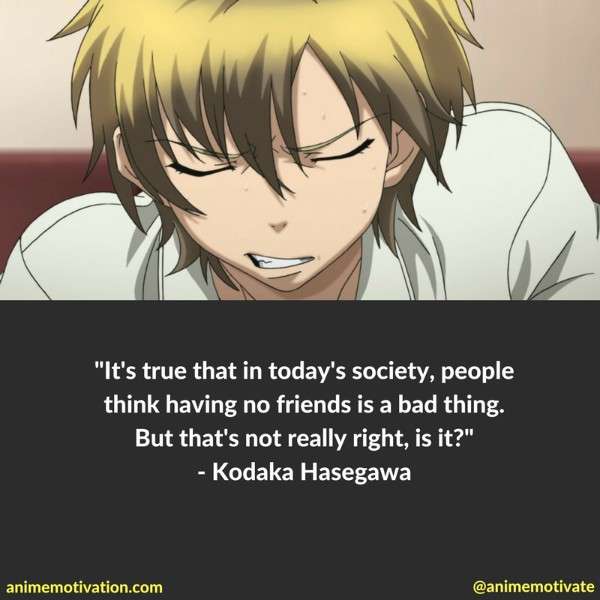 “It’s true that in today’s society, people think having no friends is a bad thing. But that’s not really right, is it?” – Kodaka Hasegawa

Most of us are programmed to believe “it’s a bad thing” or “you’re a loser” if you have no friends.

But all that really means is the person hasn’t found anyone willing to ACCEPT them for who they are.

Some people don’t have friends because they haven’t managed to find real friends  (point #1, #2 and #6). And so they choose to have acquaintances in the meantime.

It goes a lot deeper than what we’re lead to believe. 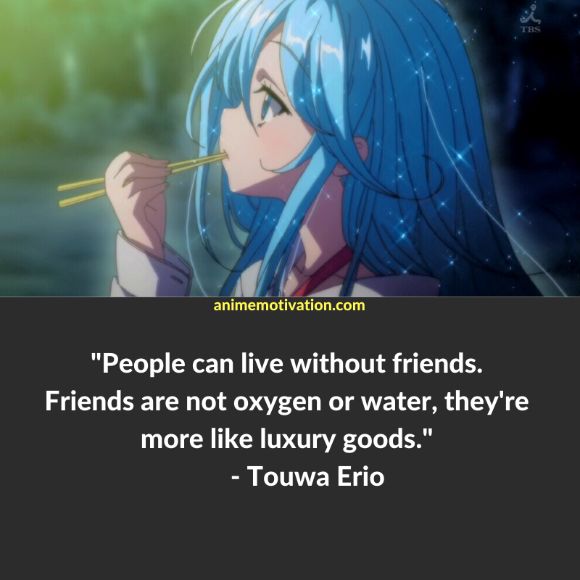 “People can live without friends. Friends are not oxygen or water, they’re more like luxury goods.” – Touwa Erio

Some people desperately look for friends to fill their own void and insecurities. Especially insecurities about “being lonely”, a notion created by society.

Friends can make life more full, lively and memorable. But just like material, jewellery, drugs or “highs” – this is more of a want than it is a need.

11. Friendship is about “trust” 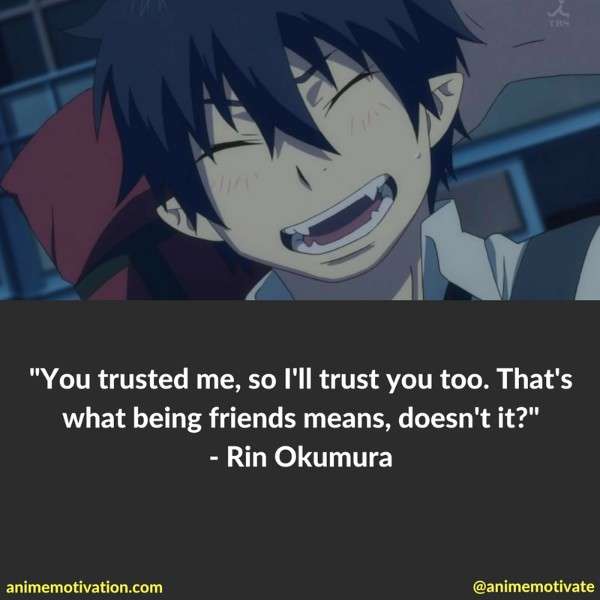 “You trusted me, so I’ll trust you too. That’s what being friends means, doesn’t it?” – Rin Okumura

If you’re not willing to take the chance and put a little “faith” into the other person… It’ll never happen.

You won’t get anywhere, and the “friendship” will struggle to make progress. Even though it’s never that simple to begin with.

7 Meaningful Life Lessons You Can Learn From Bloom Into You