Usually between 4ft and 5ft.

Just like in the real world, not everyone is “tall” and some people grow no taller than 5ft.

In anime’s case it’s usually for a reason (cute factor, Loli, etc) and some of the best characters are some of the smallest.

Renge is the youngest character in Non Non Biyori. With a strange personality and a taste for adventure.

She’s a kid after all. A lot of kids are like that between the ages of 6-9 years old.

Even though Renge is the “Kid” of the Non Non Biyori group, she makes the show more interesting because of her curiosity and willingness to do “innocent” things that sound risky.

It’s the main reason why Natsumi gets along so well with Renge, since she herself is a rebel but a lot older. 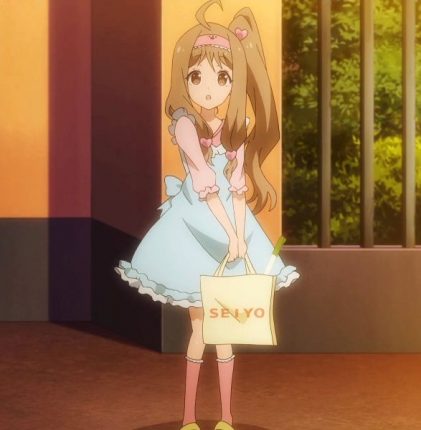 Kinue Hayase is the definition of a Loli, not just the mother of the main character Masamune Makabe. 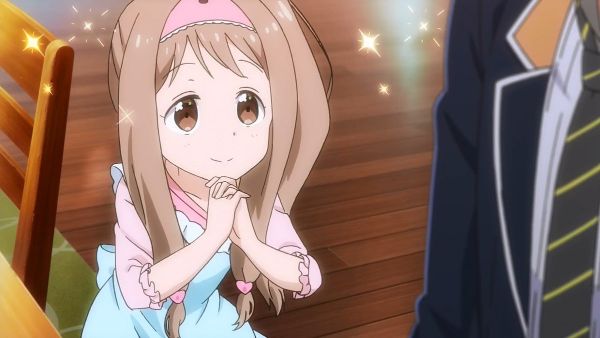 She has the typical personality you’d expect from this type of character: upbeat, jolly, and cute.

If anything she’s more of a gag character but it does make the anime that much more daft than it would’ve been. 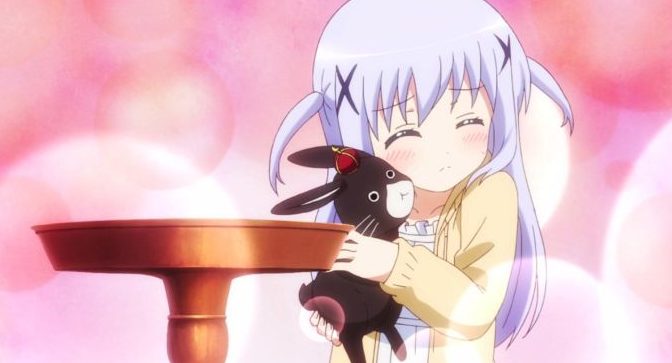 Chino Is the main character from Is The Order A Rabbit? A Slice of life/comedy produced by Studio White Fox.

Of all the characters in this series – Chino is one of the smallest, shyest characters.

The introvert type who’s socially awkward and has a little anxiety when dealing with a lot of people.

She’s the granddaughter of the owner of a cafe she works in.

4. Mashiro Mitsumine (Engaged To The Unidentified) 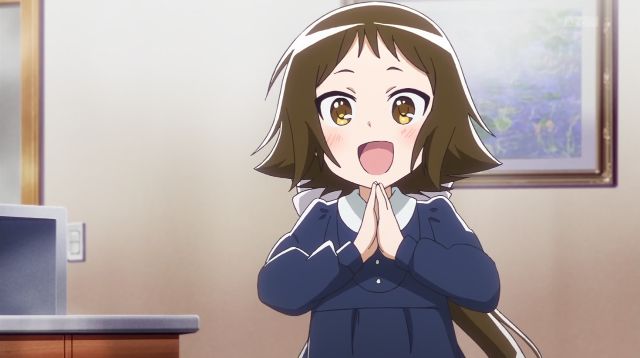 Mashiro is the smallest character in this slice of life anime with supernatural vibes.

Even though she’s only 9-10 years old she’s one of the wittiest characters in the series. Able to deduct and point out things without too much effort.

If you take Mashiro out the picture, the anime loses a lot of its flair. Even though she’s not the actual MC. 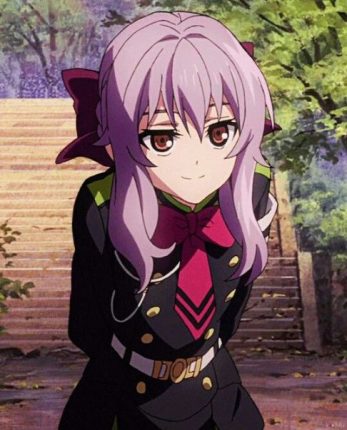 Shinoa Hiiragi is one of my favorite characters of all time. A character I relate to who shares some of my personality traits.

She’s sarcastic, care free, tongue in cheek and generally asks like she doesn’t take things seriously. Regardless of the position of power she holds in the Moon Demon Company.

But that’s really her way of dealing with life day to day. 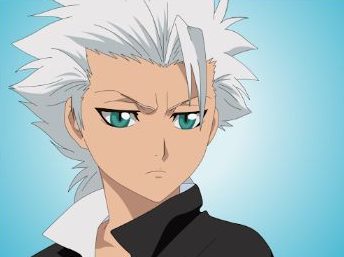 Toshiro Hitsugaya is smaller than some anime characters on this list like Shinoa. He’s barely 4ft 5 inches tall.

As one of the smallest characters in Bleach and out of the Soul Reaper captains, his height has no relevance to his power.

He’s capable of holding his own against Arrancars, but he doesn’t have a blood lust for battle like Kenpachi. 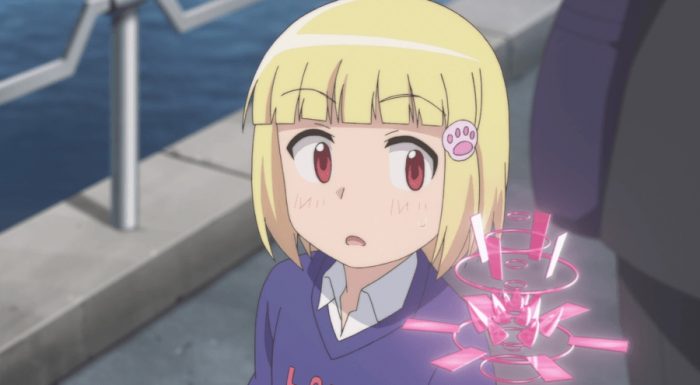 Sana Kashimura is the MC with a power called “dreams of alice”.

In Sana’s case, she has the ability to create anything through imagination. If she can picture it, she can make it happen.

A world, a planet, a type of creature, she can do all of it and more.

That’s why throughout the anime she’s being hunted down, and even escapes from a laboratory in the first few episodes.

Relevant: 7 Of The Most Powerful Female Anime Characters 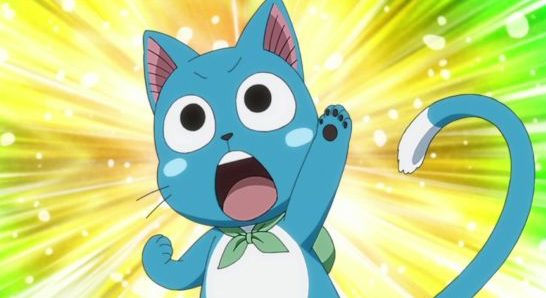 Happy is one of the most recognized mascots in anime. Fairy Tail is famous so it goes without saying.

Fairy Tail’s comedy and nonsensical moments with Natsu and other characters happen because of Happy. 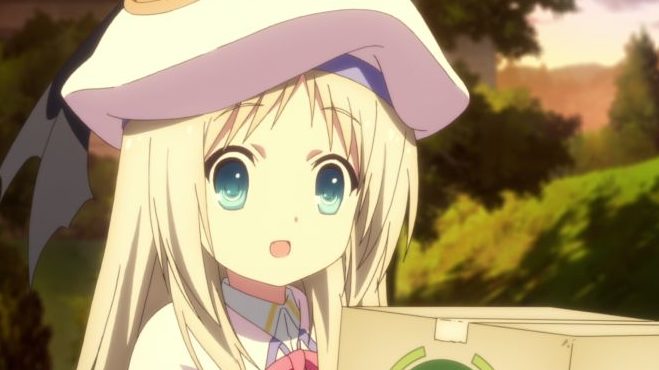 Kudryavka (or Kud for short) is the cute, kind character from Little Busters. And the foreigner of the group who’s both Japanese and Russian.

Because of her differences in personality, she adds her own blend to the group of Little Busters. And stands out, aside from her height.

Relevant: 17 Cute Anime Girls Who Will Kill You With Their Charm 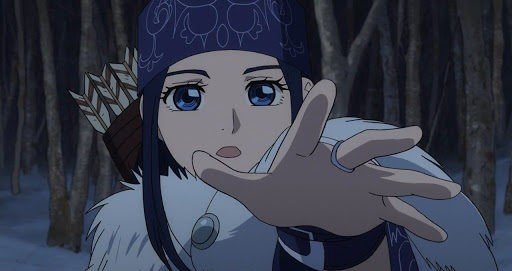 Asirpa’s small enough to be mistaken for a weak person. But she’s got more guts than most adults are capable of having.

She knows how to hunt animals for food, and can survive out in the wild no problem. Making her valuable in Golden Kamuy because of her unique skills.

A stellar example of what a relevant and strong female character looks like in anime. 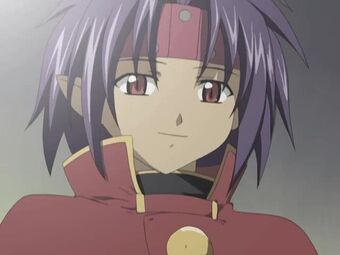 Chrono is smaller than most male characters in anime. But that’s only in his standard form.

He’s a demon after all, and in his full form he’s a lot taller just as you’d expect from a demon.

Chrono’s role as one of the main characters relates to romance with Rosette Christopher. And since he’s hardly in his demon form – it makes sense adding him to this list. 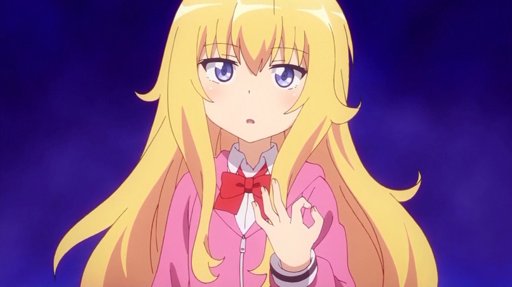 Gabriel (Gabby) is an angel who comes down to earth, and then starts slacking off. She goes from angelic to lazy, bashing video games and not being bothered to do much of anything.

This stems from the fact she’s used to the political correctness of living in heaven, and following your “duties”.

So she’s more laid back once on earth and lets loose a little.

The same thing happens with other angels and demon characters in Gabriel Dropout. 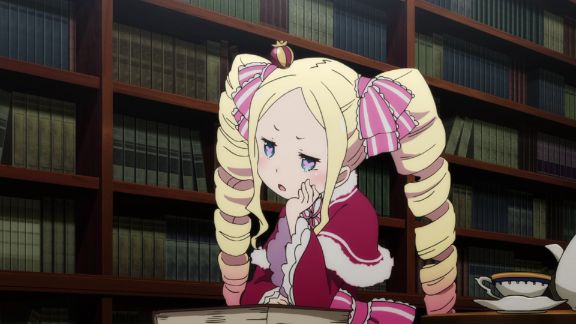 Beatrice doesn’t make much of an appearance in Re:Zero, except in the first half from time to time. But she’s still a relevant and memorable character.

As small as she is, Beatrice is more powerful than most mages in Re:Zero. But we don’t get to see too much of it.

She likes to spend a lot of time by herself in the library. 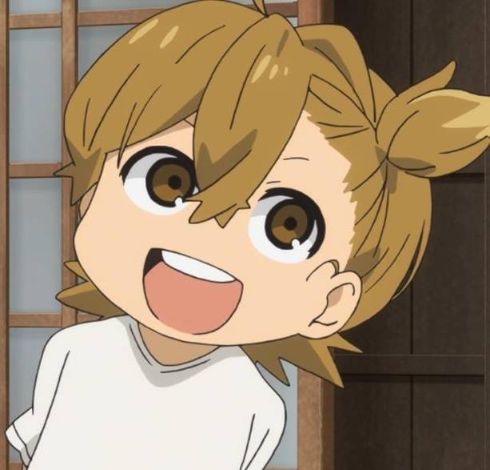 Naru is the main character besides Seishu Honda.

At the age of 7 it kinda goes without saying.

Naru likes to take risks and never holds back in doing the things she wants to do.

Hitori Bocchi, the girl the anime’s named after has social anxiety, is introverted, and has trouble socializing.

After starting off in a new school, one of her goals is to make as many friends as possible, as part of a promise to an old friend.

The anime is a realistic, and sometimes cringey example of how hard it is to make friends. And the misunderstandings that come with it.

Hitori Bocchi is a relatable character. 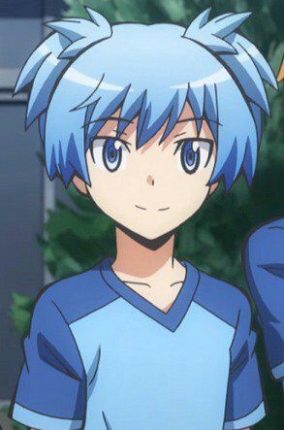 Shiota Nagisa is a persistent MC throughout season 1 and 2 of Assassination Classroom.

Gentle, innocent and sometimes even shy on the surface. But underneath the surface he’s capable of doing more than is expected by his appearance.

This element of surprise is what makes Nagisa’s role in the anime so memorable. And it only gets better.

Related: 16 Anime Characters Who Are So Gentle 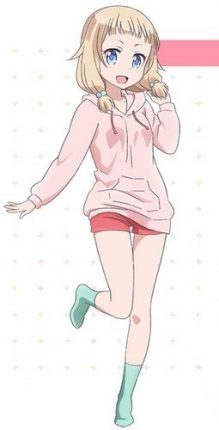 Nene Sakura is the best friend of Aoba Suzukaze from New Game! Both graduated college together before ending up in the same company: Eagle Jump.

She’s the one friend who’s always got Aoba’s back, and will do anything for her in general.

They have an innocent friendship that goes a long way. 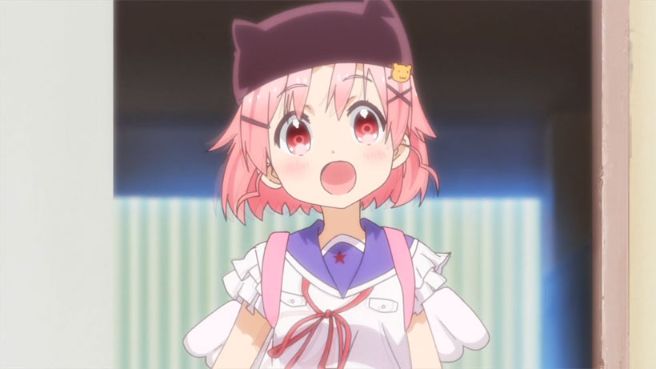 Yuki Takeya’s that one character (or person) who you can’t be angry around, or even get mad at.

She’s too optimistic, positive, see’s the bright side of things and is jolly in general.

For a Horror anime series – she has the right personality and it helps balance out the plot and other main characters. 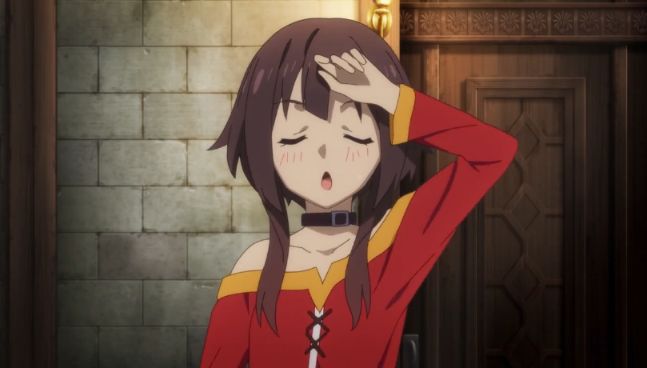 Megumin when you take off her hat – is a lot smaller than she seems. So I added her to the list for that reason.

She doesn’t need much of an introduction. She’s the face of so many anime memes, has one of the best smug faces, and is famous for her “explosion” technique in Konosuba.

Megumin’s personality is a lot more tame compared to someone like Darkness though.

Related: 35 Ridiculous Smug Anime Faces That Will Make Your Day 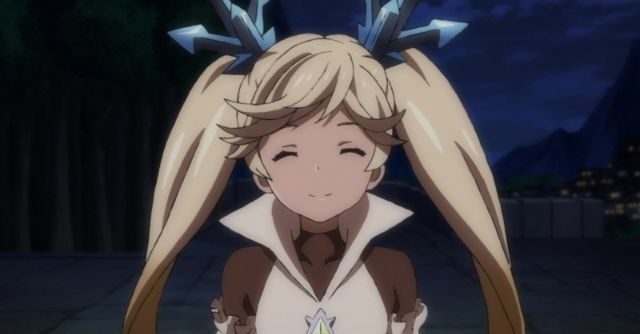 Io Euclase is an 11 year old character in the Granblue Fantasy series (anime or otherwise).

She’s a slightly bossy character with a firm personality and hates being treated like a child.

She plays a relevant role in the anime as a mage. 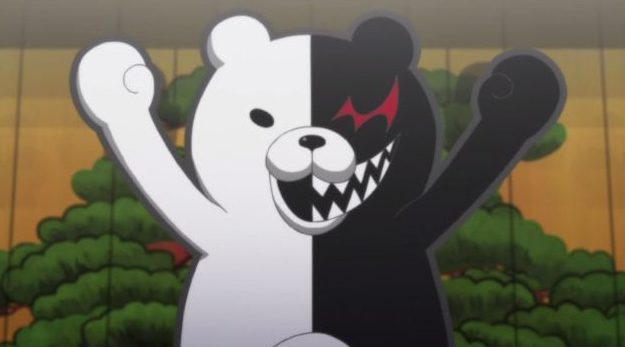 Monokuma is the main villain that shows up in Danganronpa. A mechanical bear with an attitude and a dark sense of humor.

He’s the main one doing the killing so it only makes sense his personality matches his actions. But it’s comical because of the way Monokuma looks.

At 2’1 feet tall, few anime characters can ever compare to how small Monokuma is. 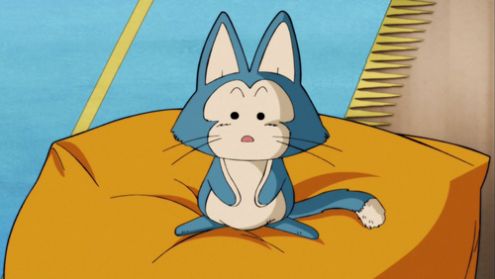 Puar is a shape-shifting animal first seen in Dragon Ball season 1. Puar is a long time friend of Yamcha.

In 2020 and beyond – Puar is a useless character to the plot now, and never really had strong relevance to the story. But Puar does add to the dialogue when it counts in the earlier stages of DB. 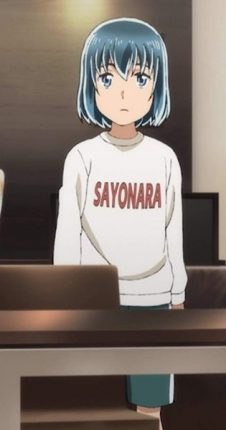 Hina, the nonchalant, aloof and straightforward anime girl from Hinamatsuri (a personal favorite).

She’s as laid back as they come, and in some ways a little selfish (in the context of the anime). Hina’s the reason the anime has so much comedy when things aren’t emotional or deep.

Related: 7 Tough Life Lessons You Can Learn From Hinamatsuri 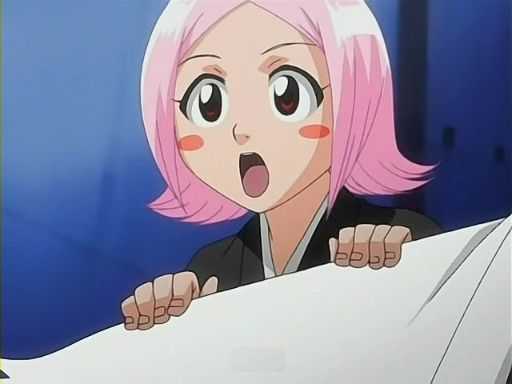 Yachiru’s an iconic character in Bleach even though she doesn’t get much screentime or action.

She’s even smaller than Toshiro Hitsugaya, and is more powerful than the average Lieutenant in the series. After all – she can handle Kenpachi’s spiritual pressure.