Niji Hyuga starts out as a slightly arrogant, fixed minded character who believes you can’t “grow” if you’re already weak. And then evolves through his interactions with .

He’s one of the most relevant Hyuga’s, and his experiences bleed into his quotes and dialogue in . Both when he’s feeling negative and positive. 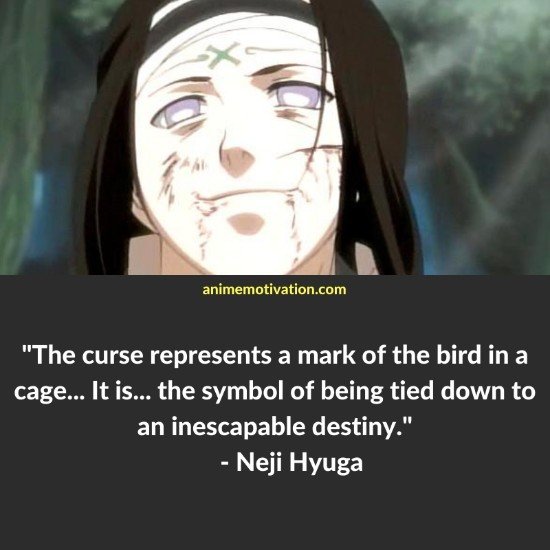 “The curse represents a mark of the bird in a cage… It is… the symbol of being tied down to an inescapable destiny.” – Neji Hyuga 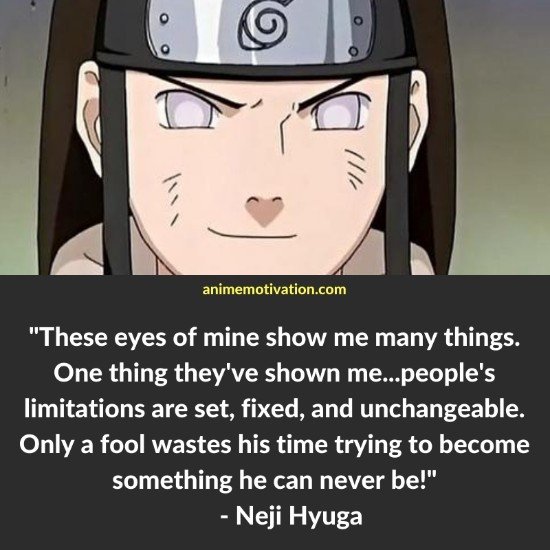 “These eyes of mine show me many things. One thing they’ve shown me…people’s limitations are set, fixed, and unchangeable. Only a fool wastes his time trying to become something he can never be!” – Neji Hyuga 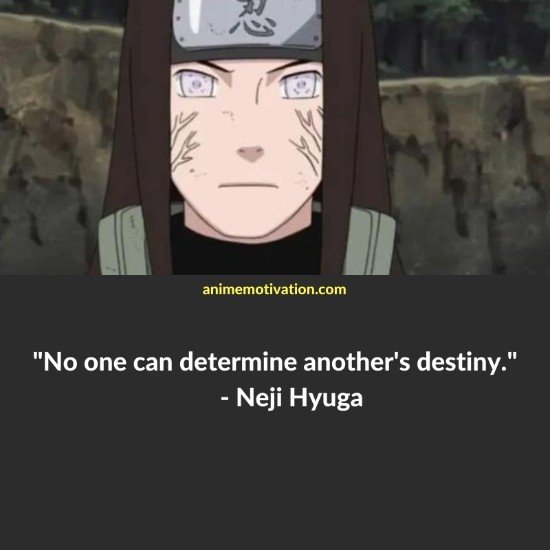 “No one can determine another’s destiny.” – Neji Hyuga 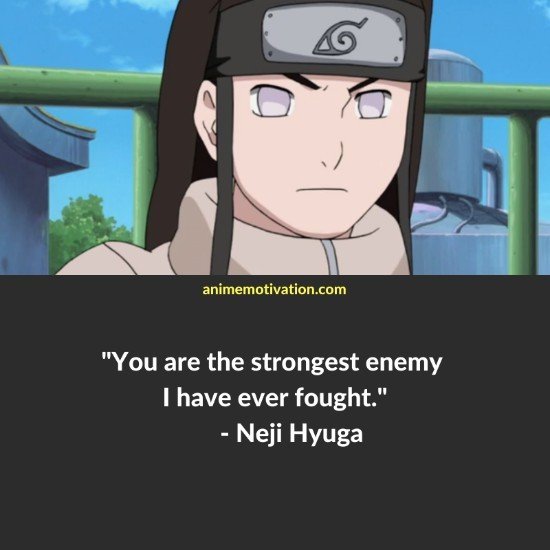 “You are the strongest enemy I have ever fought.” – Neji Hyuga 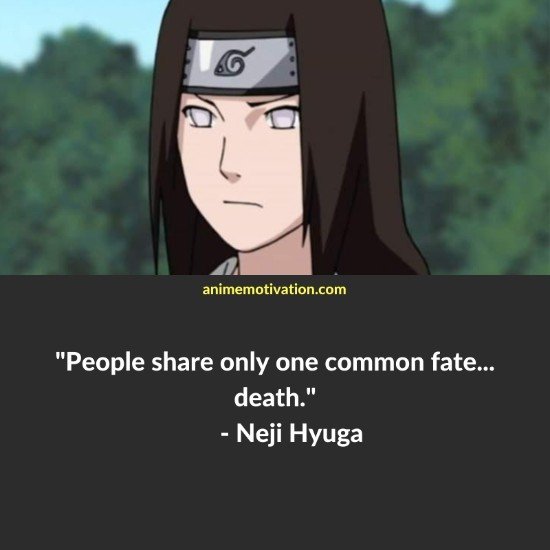 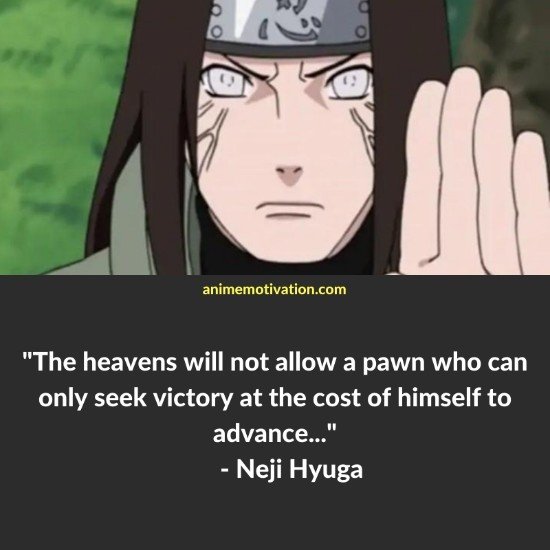 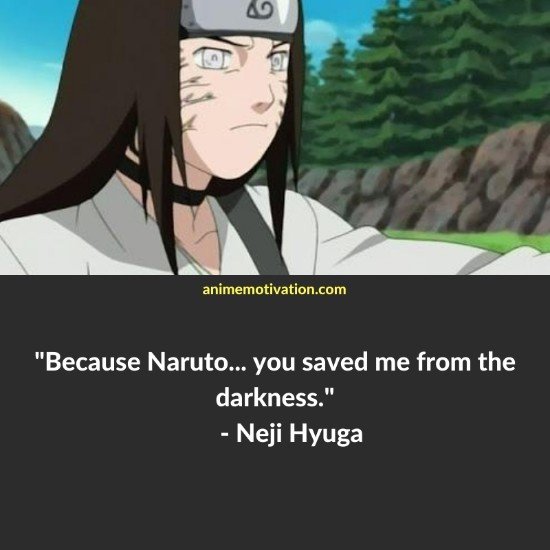 “Because … you saved me from the darkness.” – Neji Hyuga 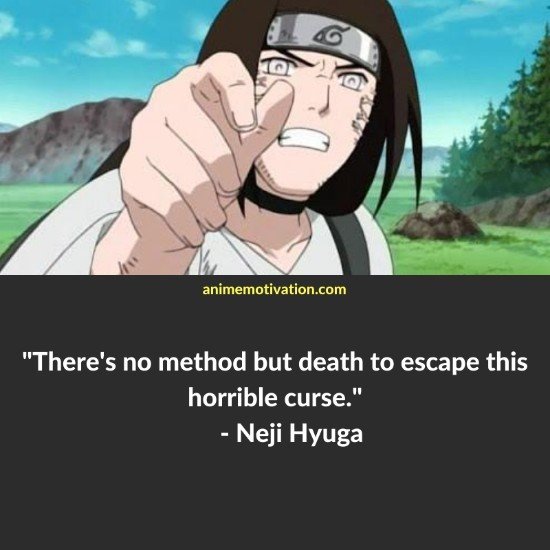 “There’s no method but death to escape this horrible curse.” – Neji Hyuga 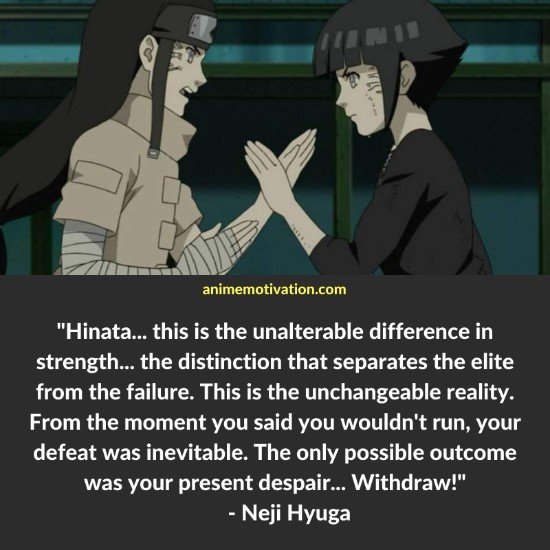 “Hinata… this is the unalterable difference in strength… the distinction that separates the elite from the failure. This is the unchangeable reality. From the moment you said you wouldn’t run, your defeat was inevitable. The only possible outcome was your present despair… Withdraw!” – Neji Hyuga 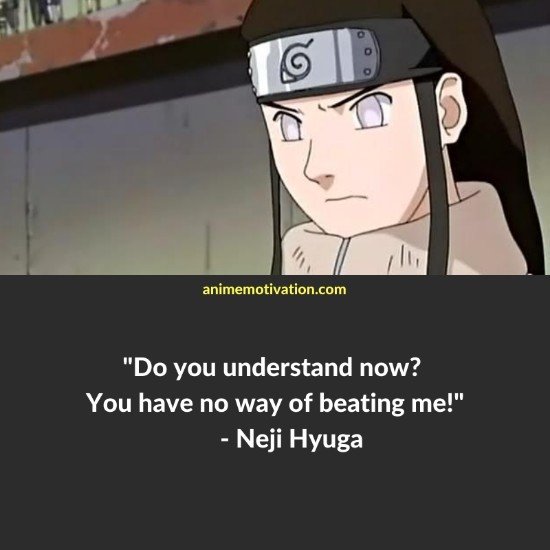 “Do you understand now? You have no way of beating me!” – Neji Hyuga 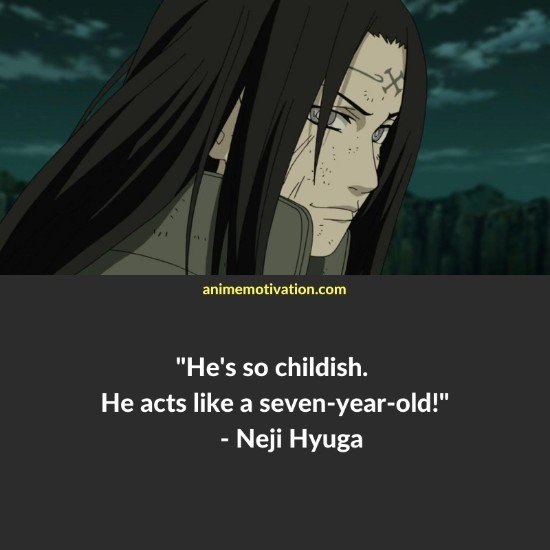 “He’s so childish. He acts like a seven-year-old!” – Neji Hyuga 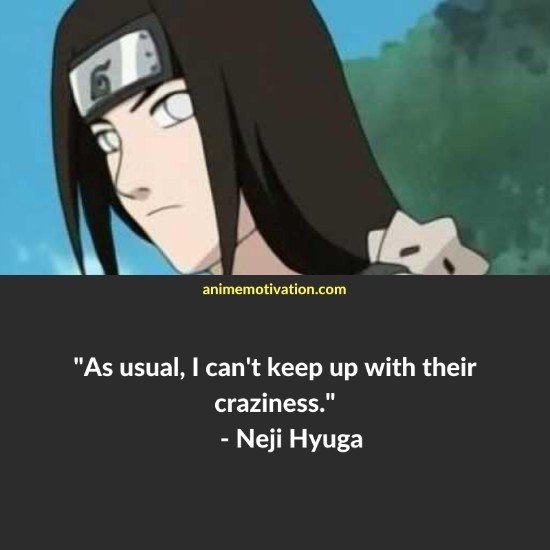 “As usual, I can’t keep up with their craziness.” – Neji Hyuga 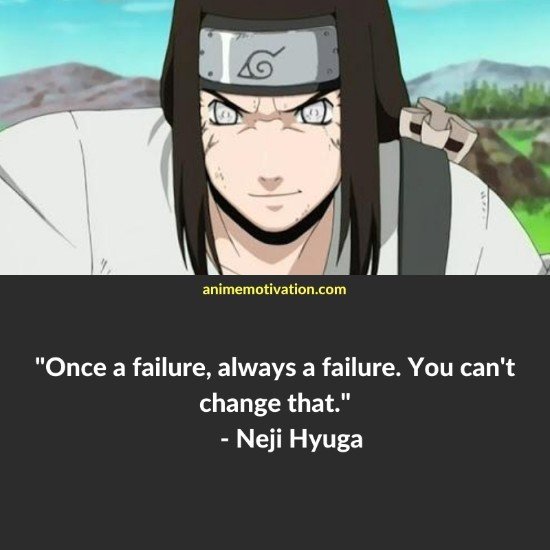 “Once a failure, always a failure. You can’t change that.” – Neji Hyuga 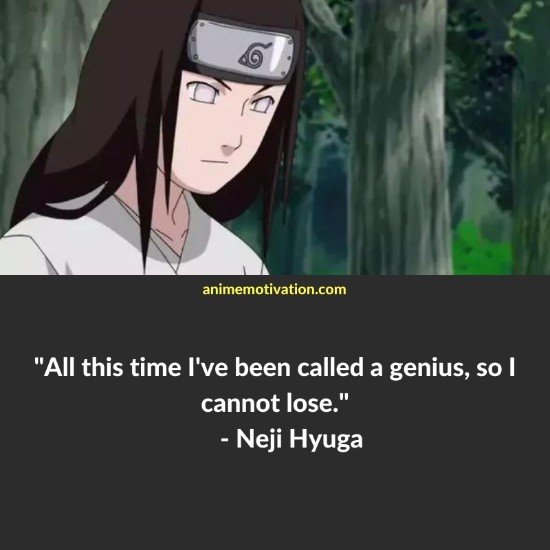 “All this time I’ve been called a genius, so I cannot lose.” – Neji Hyuga 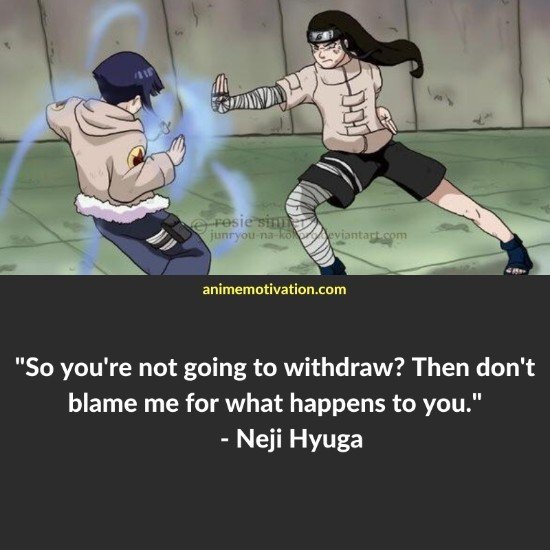 “So you’re not going to withdraw? Then don’t blame me for what happens to you.” – Neji Hyuga 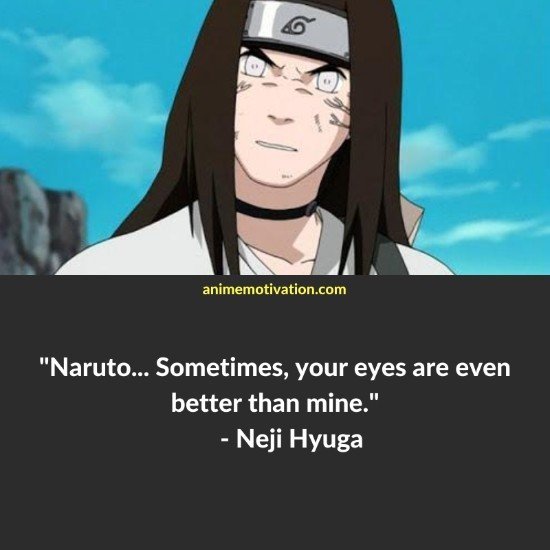 “Naruto… Sometimes, your eyes are even better than mine.” – Neji Hyuga 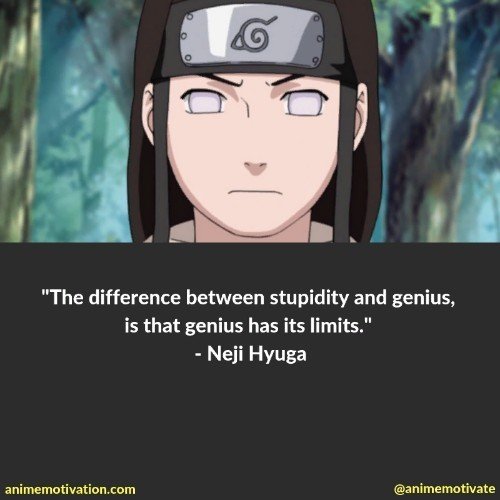 “The difference between stupidity and genius, is that genius has its limits.” – Neji Hyuga 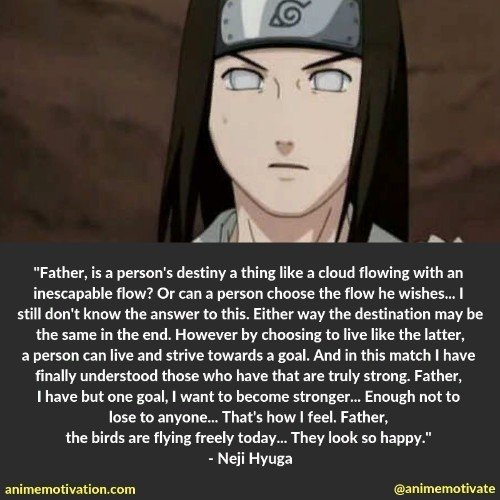 “Father, is a person’s destiny a thing like a cloud flowing with an inescapable flow? Or can a person choose the flow he wishes… I still don’t know the answer to this. Either way the destination may be the same in the end. However by choosing to live like the latter, a person can live and strive towards a goal. And in this match I have finally understood those who have that are truly strong. Father, I have but one goal, I want to become stronger… Enough not to lose to anyone… That’s how I feel. Father, the birds are flying freely today… They look so happy.” – Neji Hyuga 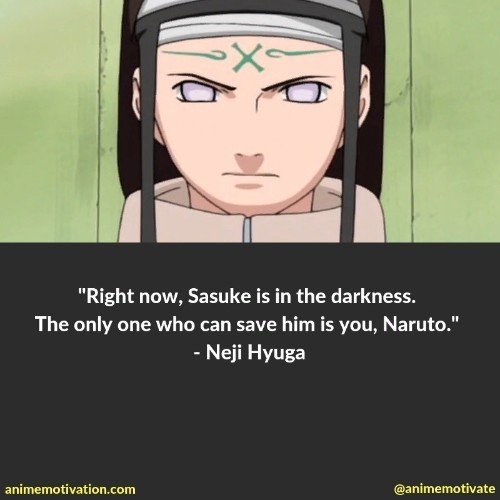 “Right now, Sasuke is in the darkness. The only one who can save him is you, .” – Neji Hyuga 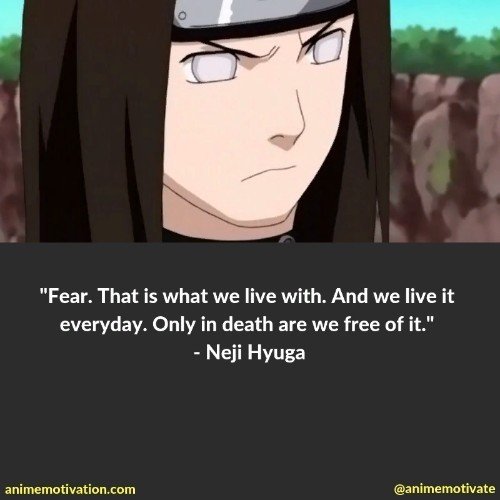 “Fear. That is what we live with. And we live it everyday. Only in death are we free of it.” – Neji Hyuga 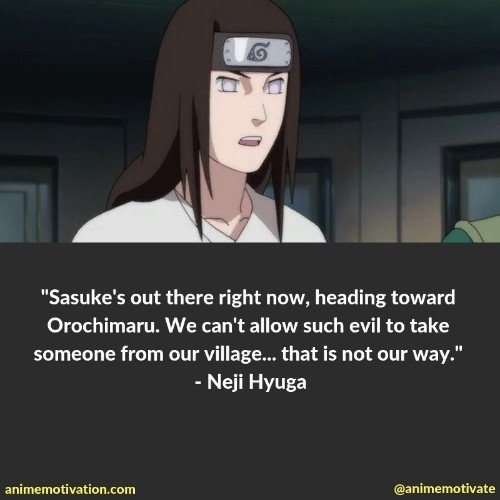 “Sasuke’s out there right now, heading toward Orochimaru. We can’t allow such evil to take someone from our village… that is not our way.” – Neji Hyuga

A Collection Of The Greatest Tenten Quotes From NARUTO