Anime is for kids? Little do these people know who view anime as a childish piece of entertainment.

Anime in a lot of cases is even more saddening, heart breaking, and soul crushing than Hollywood films.

And it’s no exaggeration to say some quotes are depressing. And that’s exactly why it helps you relate, feel the emotion, and develop an appreciation for certain animes.

Here are some of the saddest anime quotes ever seen, that may just make you shed a tear. 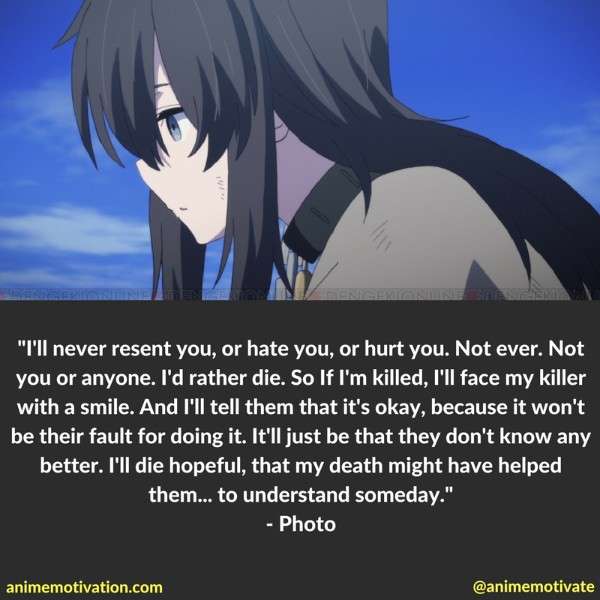 “I’ll never resent you, or hate you, or hurt you. Not ever. Not you or anyone. I’d rather die. So If I’m killed, I’ll face my killer with a smile. And I’ll tell them that it’s okay, because it won’t be their fault for doing it. It’ll just be that they don’t know any better. I’ll die hopeful, that my death might have helped them… to understand someday.” – Photo

Photo (as she’s later named) is a slave from Kino’s Journey – The Animated Series.

During this episode of the anime, her attitude in spite of being a slave is an eye opener. And the above quote highlights these sad, yet powerful and inspiring words. 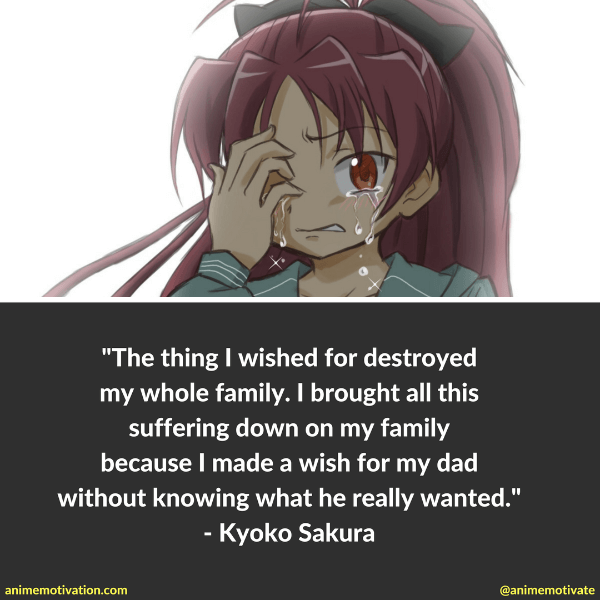 “The thing I wished for destroyed my whole family. I brought all this suffering down on my family because I made a wish for my dad without knowing what he really wanted.” – Kyoko Sakura

In , Kyoko’s wish literally destroys her entire family. And she’s left alone to fend for herself.

This is why she has such a tough demeanor and a strong personality. 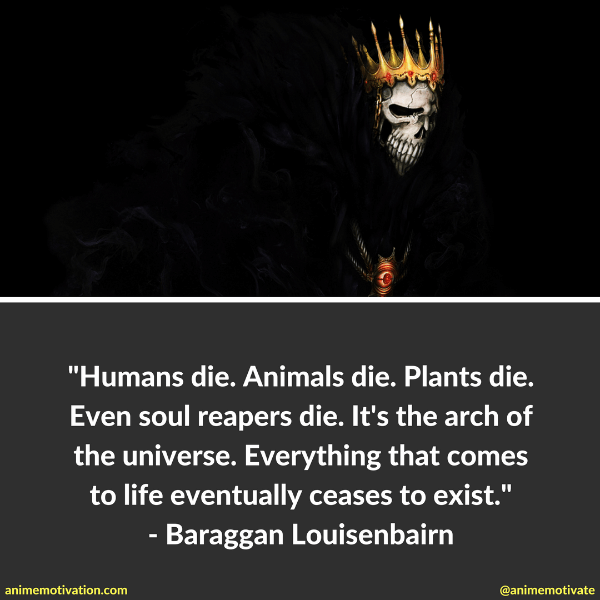 This is the reality we all have to face someday.

As sad as it is, especially within those last moments, it’s a fact that feels better once you accept it. 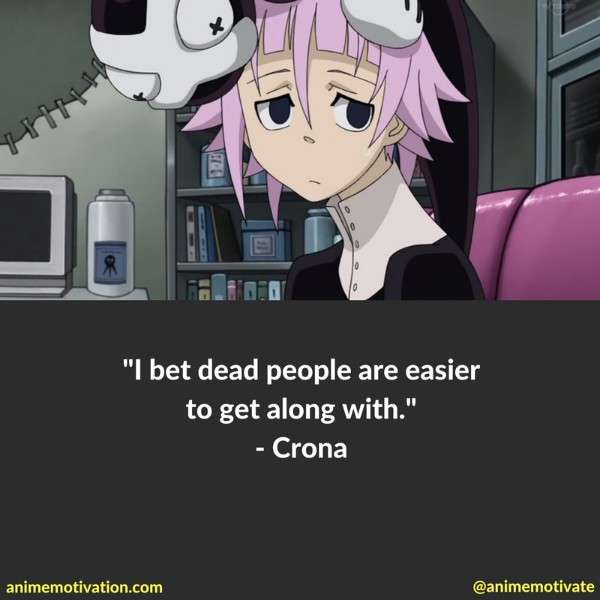 “I bet dead people are easier to get along with.” – Crona

Crona’s upbringing was a living hell, thanks to the witch who created her.

She’s been denied love and affection, and so it’s no wonder she see’s the world this way. 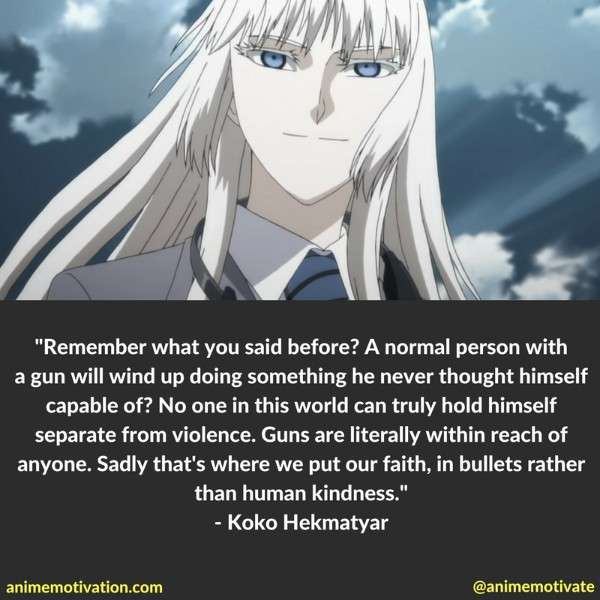 “Remember what you said before? A normal person with a gun will wind up doing something he never thought himself capable of? No one in this world can truly hold himself separate from violence. Guns are literally within reach of anyone. Sadly that’s where we put our faith, in bullets rather than human kindness.”- Koko Hekmatyar

Isn’t it sad when you think about it? We put more faith in bullets and war, than we do in human kindness or education.

“The loneliest people are the kindest. The saddest people smile the brightest. The most damaged people are the wisest. All because they don’t wish to see anyone else suffer the way they did.” – Jellal Fernandes

Jellal is the perfect definition of “sadness”. And his quotes come from his own hard experiences in life. 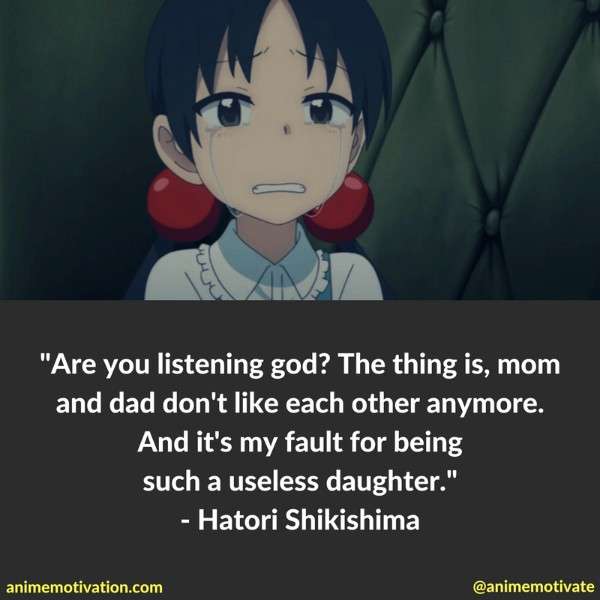 “Are you listening god? The thing is, mom and dad don’t like each other anymore. And it’s my fault for being such a useless daughter.” – Hatori Shikishima

You can feel the pain in Hatori’s voice in this scene. And it’s so genuine that it’s hard not to take it in. 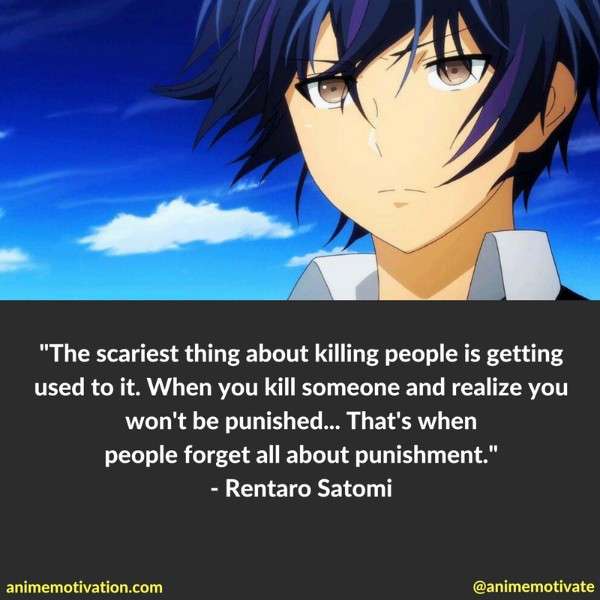 “The scariest thing about killing people is getting used to it! When you kill someone and realize you won’t be punished… That’s when people forget all about punishment.” – Rentaro Satomi

There’s a dark element of truth to this when it comes to police shootings, and even the military.

Power sometimes leads to dangerous, immoral situations. And what’s worse is when they get away with it. 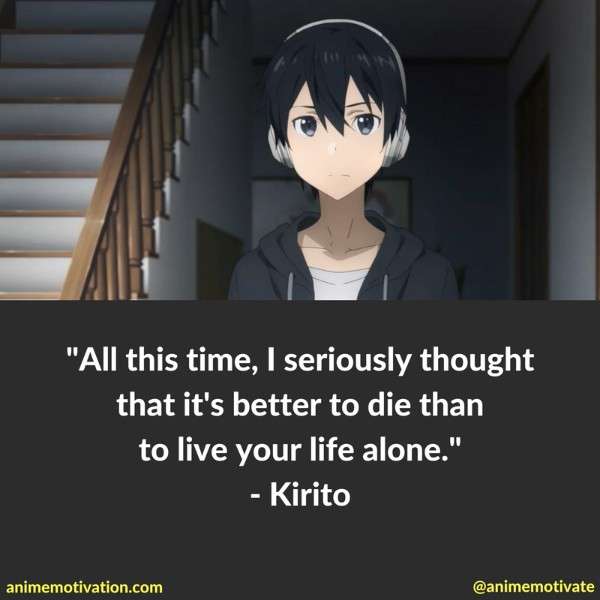 “All this time, I seriously thought that it’s better to die than to live your life alone.” – Kirito

Death is a wasteful option if you’re alive, healthy, mobile and capable. 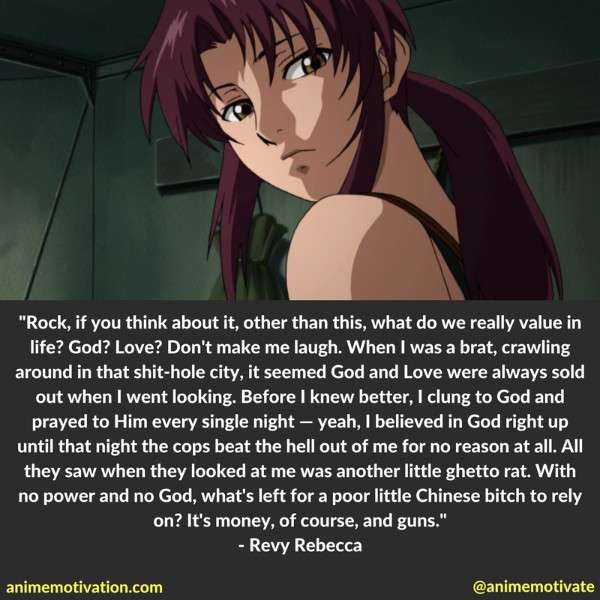 “Rock, if you think about it, other than this, what do we really value in life? God? Love? Don’t make me laugh. When I was a brat, crawling around in that shithole city, it seemed God and Love were always sold out when I went looking. Before I knew better, I clung to God and prayed to Him every single night — yeah, I believed in God right up until that night the cops beat the hell out of me for no reason at all. All they saw when they looked at me was another little ghetto rat. With no power and no God, what’s left for a poor little Chinese bitch to rely on? It’s , of course, and guns.” – Revy Rebecca

This quote from Black Lagoon is so gut-wrenching, depressing and F’d up. And yet it paints a realistic image of certain truths about life we tend to overlook.

And when you’ve had a disgusting upbringing for no fault of your own, this type of thinking is understandable. 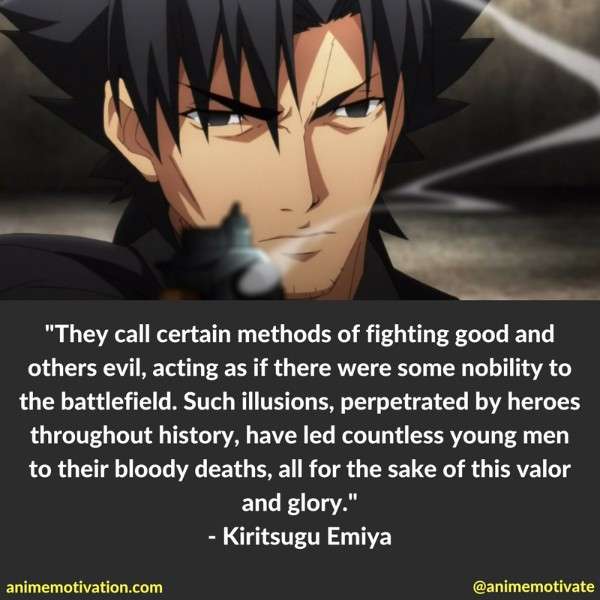 “They call certain methods of fighting good and others evil, acting as if there were some nobility to the battlefield. Such illusions, perpetrated by heroes throughout history, have led countless young men to their bloody deaths, all for the sake of this valor and glory.” – Kiritsugu Emiya 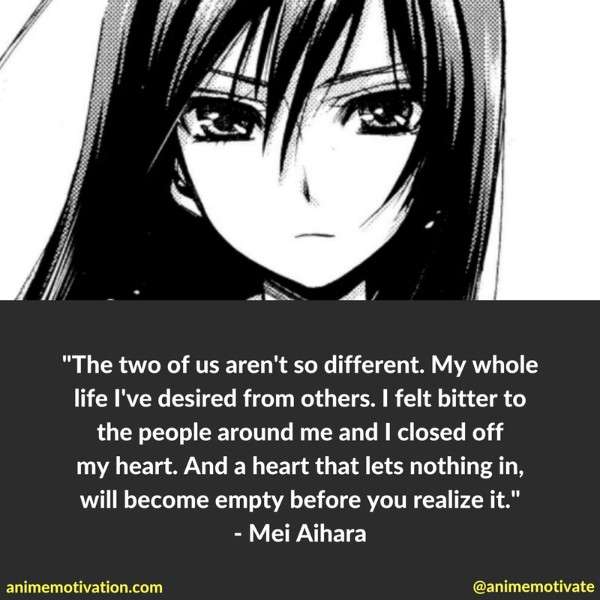 “The two of us aren’t so different. My whole life I’ve desired from others. i felt bitter to the people around me and I closed off my heart. And a heart that lets nothing in, will become empty before you realize it.” – Mei Aihara

Emptiness is the worst way to live. It’s like you’re the living dead, and life loses all its meaning. 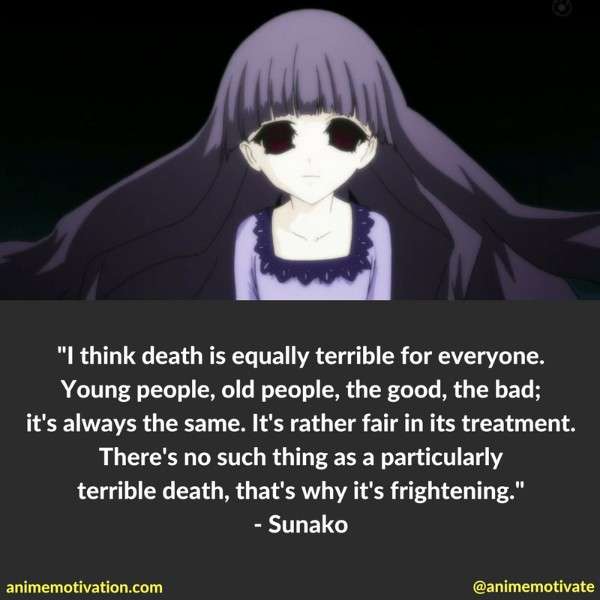 “I think death is equally terrible for everyone. Young people, old people, the good, the bad; it’s always the same. It’s rather fair in its treatment. There’s no such thing as a particularly terrible death, that’s why it’s frightening.” – Sunako 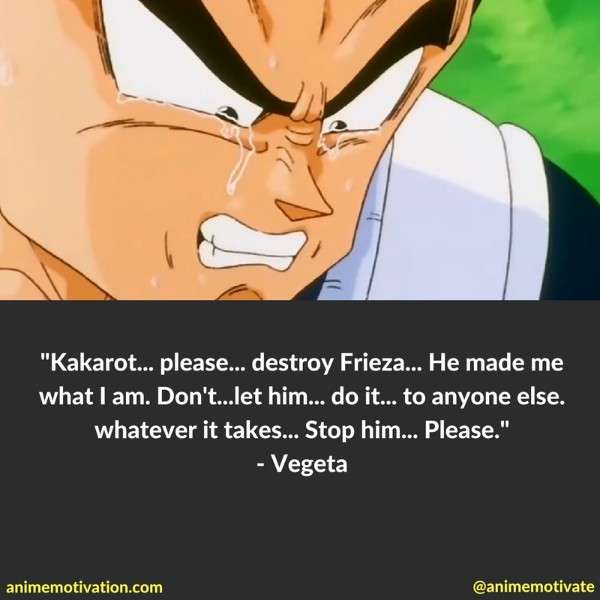 “Kakarot… please… destroy Frieza… He made me what I am. Don’t…let him… do it… to anyone else. whatever it takes… Stop him… Please.” – Vegeta

If I had to choose one moment within or any anime, Vegeta takes the cake.

It’s hard seeing a guy who has a tough exterior, cry in fear of his own death. And weep like a little baby in his last moments to Goku.

One of the best, most saddest anime scenes ever.

Mio Nishizono’s a lonely girl who everyone ignores, as if she doesn’t exist. And I can relate to her message.

These Are The Most Meaningful Quotes From The Spice And Wolf

The 20 Most Powerful Anime Quotes From My Hero Academia