The Oscar Awards, just like many other RIGGED award shows are:

It’s because of these reasons that a lot of GREAT films and entertainment are ignored.

The same thing happens in the industry and other genres as well.

But let’s focus on 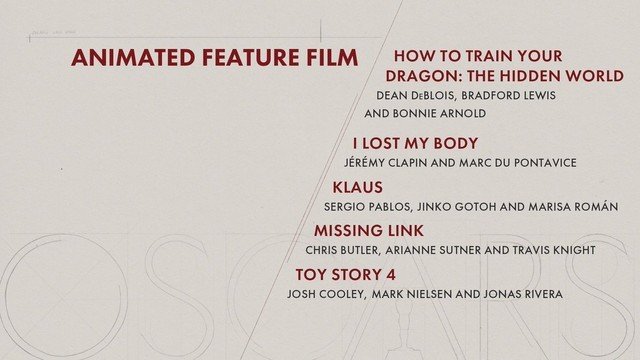 These were the “animated” featured films that ended up in the “nominees” list for the Oscars.

These 4 films were submitted to the Oscars for the “animation” category.

And as you can imagine… NONE of them were nominated.

The ONLY film (or “” anything”) to win an Oscar is Spirited Away.

Miyazaki is well known in the US for his films and content.

Not to discredit Spirited Away’s quality, but this is one of the main reasons the Oscars bend over backwards for his (to a degree).

Anything beyond this ONE Oscar award for an  doesn’t exist. Even today in 2020.

How the Oscars is set up:

THIS is how the Oscars awards is set up behind the scenes. And it’s the reason so many shows, films and get overlooked year after year.

It’s not even about the fans vote, or the people’s vote.

It comes down to “mostly” pompous American Men within the industry, who push a few buttons they like, and ignore the rest that don’t fit an agenda.

It’s about favoritism, NOT quality or talent

This along with the other movie submissions for the Oscars had similar success.

The Oscars on the surface “seems” like it’s all for equality (including all films from all backgrounds), but is never a safe choice. Even when It’s P.G.

And so expecting otherwise is wishful thinking.

What fans say about the 2020 Oscars

I guess #Promare was too hot for the Oscars pic.twitter.com/dpG9ijt2Ui

I mean did we really expect to make it to the Oscars? It’s just a bunch of rich people who only care about western films

Pffft, I actually don’t care anymore that doesn’t get nominated for Oscars. Th Oscars are a farce because it’s usually which ever company pays the most, will win. Like most big Hollywood award shows. They don’t mean anything to me anymore. If it’s a good film it will show🙂

I expected as much,the Oscars will never be fair. Such a shame. I knew this would happen every time any or non big name cartoon gets nominated ever since they awarded Big Hero 6 over Song of the Sea in 2014,some members of the panel had never even watched the latter.

The first tweet got it right: “you don’t say”.

(or anything that the Oscars ignores) doesn’t need the validation.

fans shouldn’t be looking for it, and neither should the community as a whole.

It doesn’t change anything for the industry in the grand scheme of things.

The TRUTH About The Vic Mignogna #MeToo Allegations

The Problem With Crunchyroll’s Anime Awards