Railgun is an action/superhero based series. With a mix of slice of life, fun and laid back episodes that are enjoyable to watch.

Every few episodes or so, A Certain Scientific Railgun pulls out a bunch of inspirational quotes.

Quotes that are encouraging, and most of all, quotes you can relate to as an fan.

And that’s what makes Railgun such a great show. Alongside it’s great storytelling and character development.

With that said – let’s get right to it! 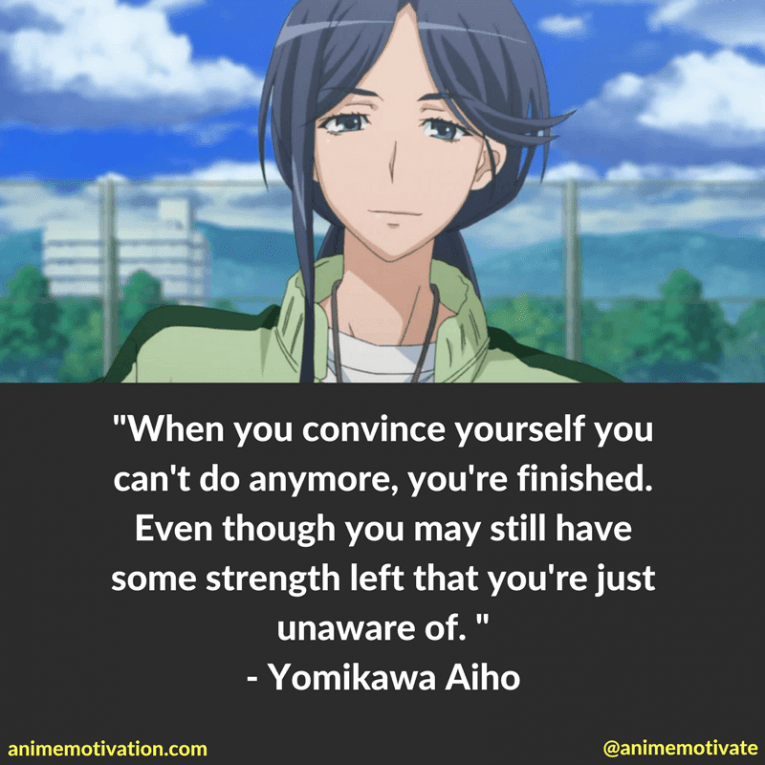 “When you convince yourself you can’t do anymore, you’re finished. Even though you may still have some strength left that you’re just unaware of.” – Yomikawa Aiho 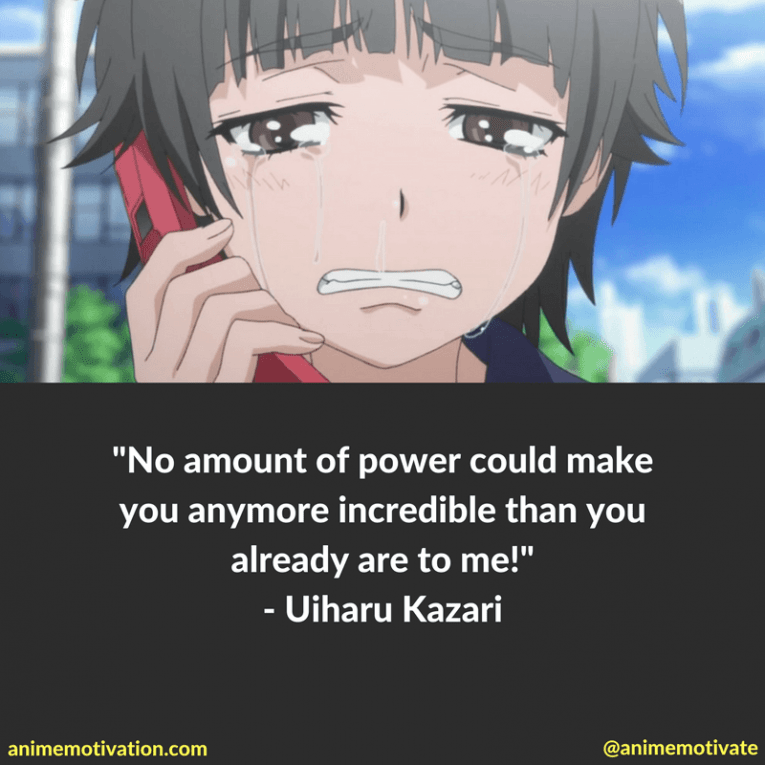 “No amount of power could make you anymore incredible than you already are.” – Uiharu Kazari 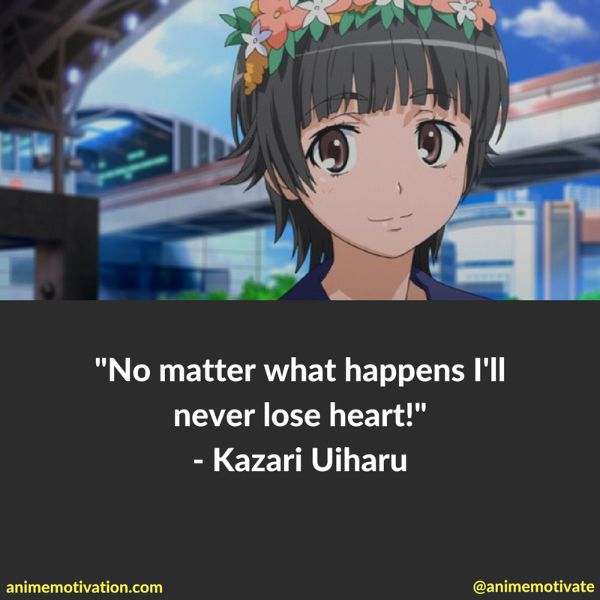 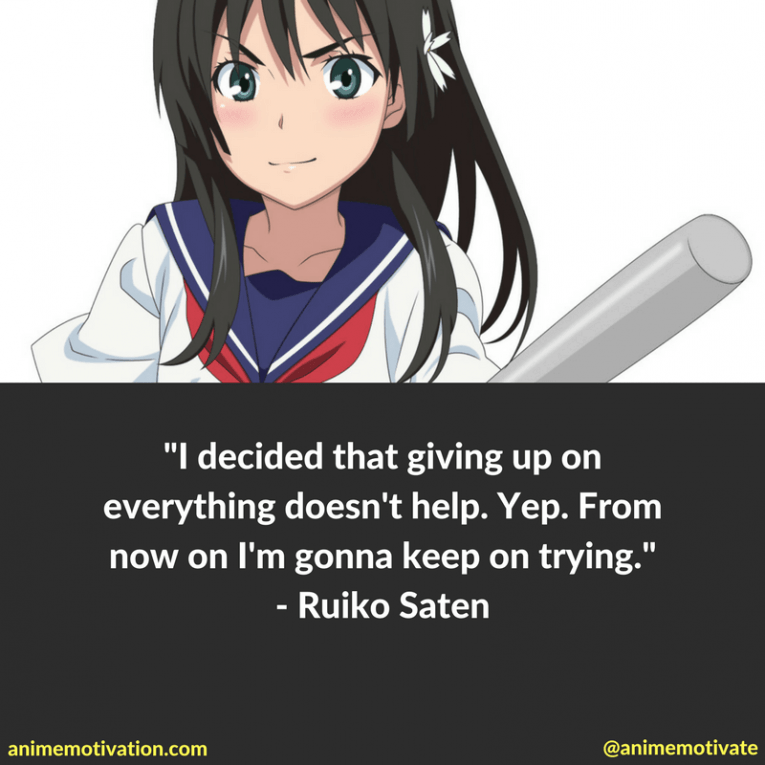 “I decided that giving up on everything doesn’t help. Yep. From now on I’m gonna keep on trying!” – Ruiko Saten 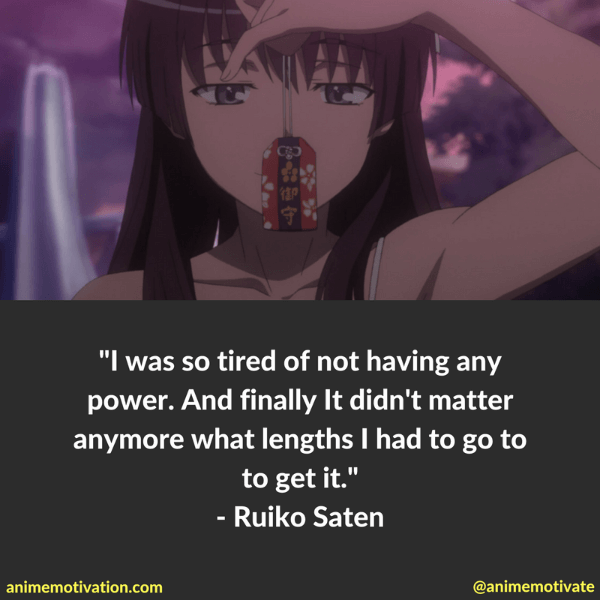 “I was so tired of not having any power. And finally it didn’t matter anymore what lengths I had to go to to get it.” – Ruiko Saten 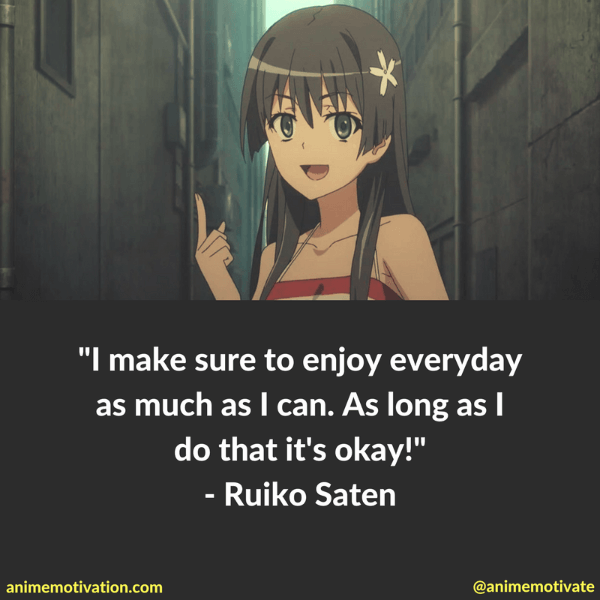 “I make sure to enjoy everyday as much as I can. As long as I do that it’s okay!” – Ruiko Saten 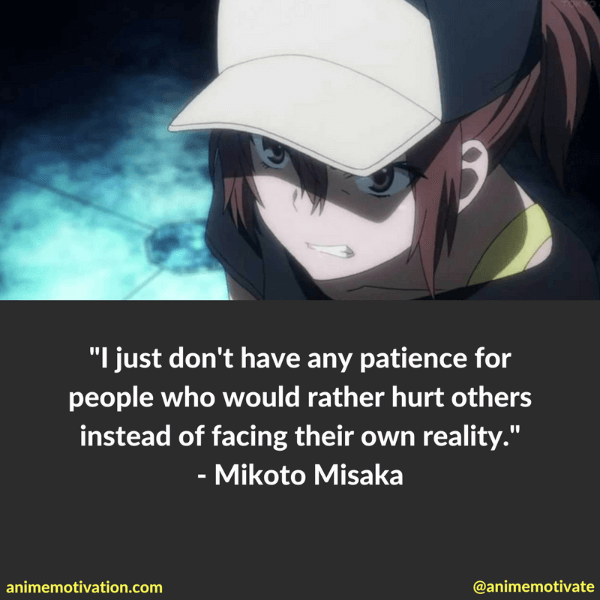 “I just don’t have any patience for people who would rather hurt others instead of facing their own reality.” – Mikoto Misaka 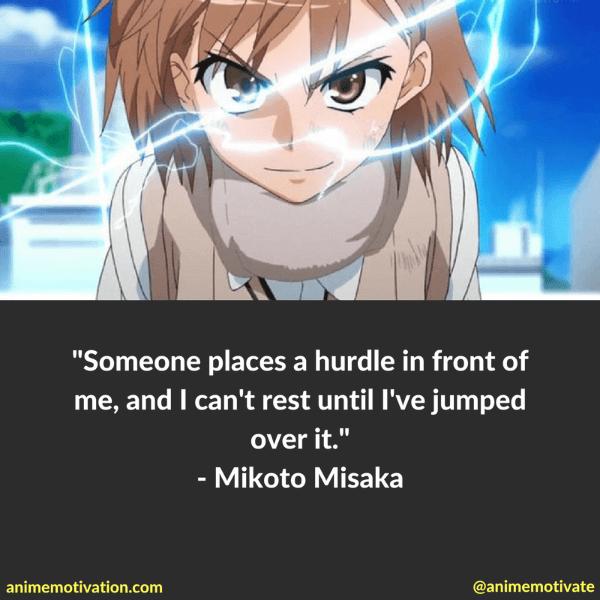 “Someone places a hurdle in front of me, and I can’t rest until I’ve jumped over it.” – Mikoto Misaka 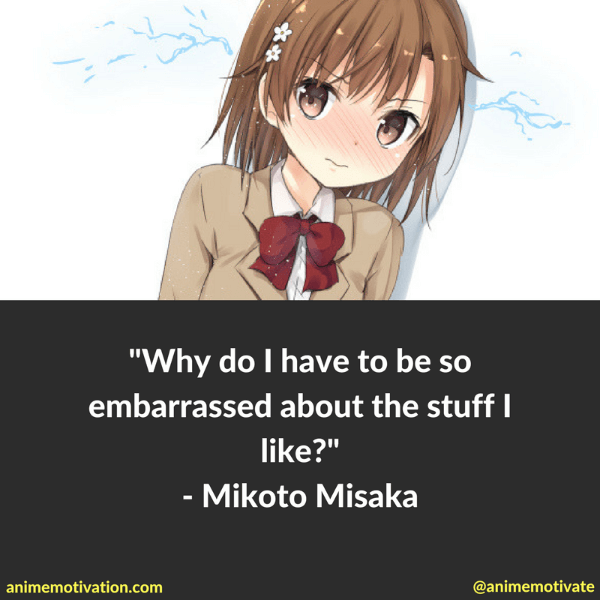 “Why do I have to be so embarrassed about the stuff I like?” – Mikoto Misaka 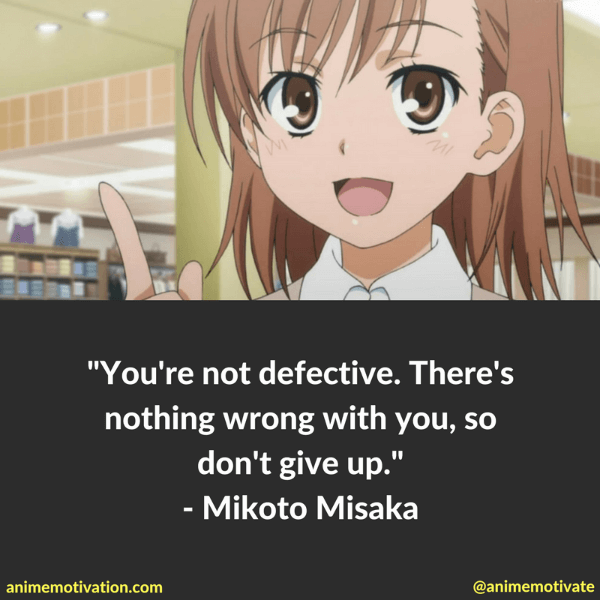 “You’re not defective. There’s nothing wrong with you, so don’t give up.” – Mikoto Misaka 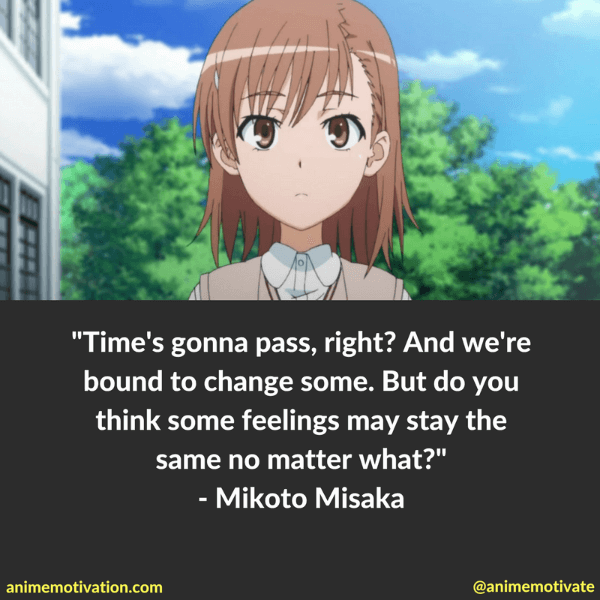 “Time’s gonna pass, right? And we’re bound to change some. But do you think some feelings may stay the same no matter what?” – Mikoto Misaka 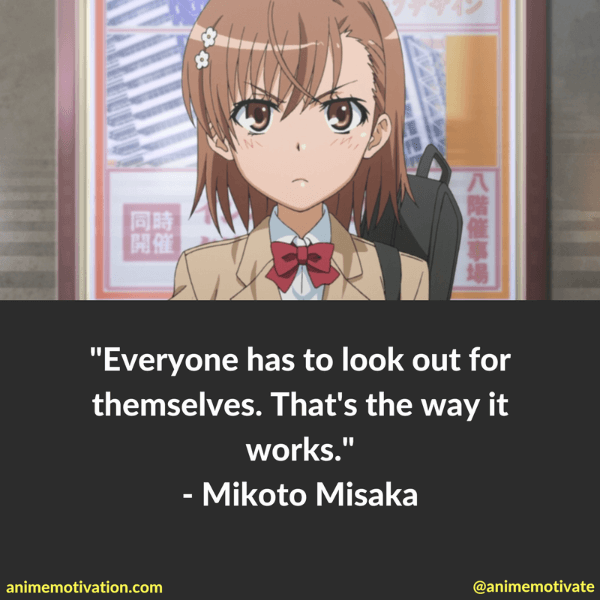 “Everyone has to look out for themselves. That’s the way it works.” – Mikoto Misaka 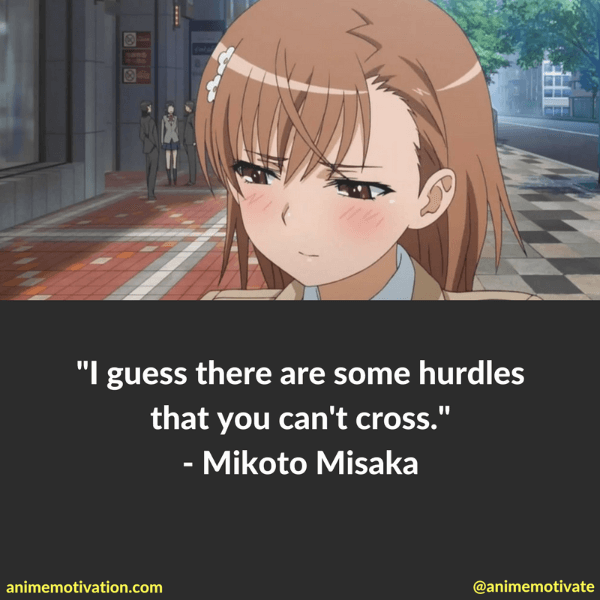 “I guess there are some hurdles you can’t cross.” – Mikoto Misaka 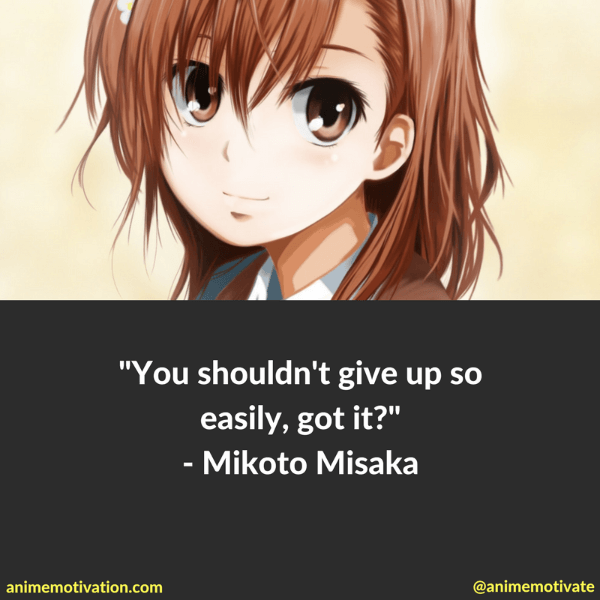 “You shouldn’t give up so easily, got it?” – Mikoto Misaka 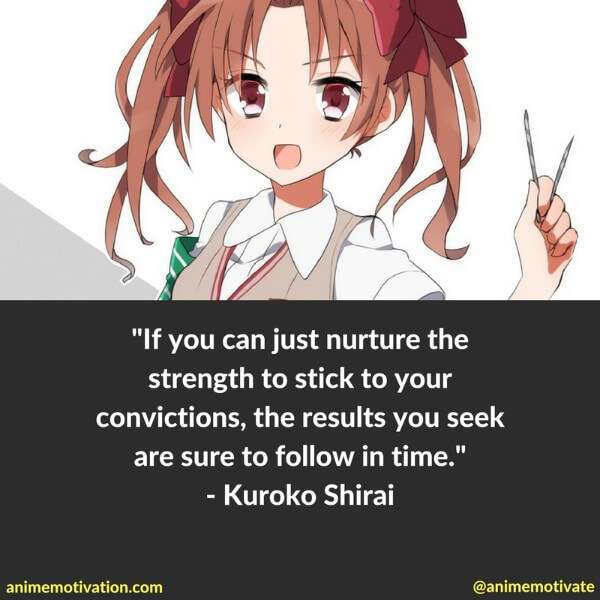 “If you can just nurture the strength to stick to your convictions, the results you seek are sure to follow in time.” – Kuroko Shirai 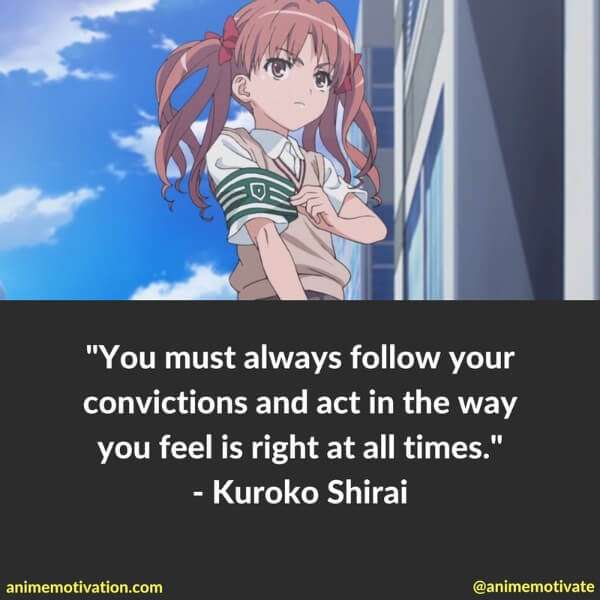 “You must always follow your convictions and act in the way you feel is right at all times.” – Kuroko Shirai 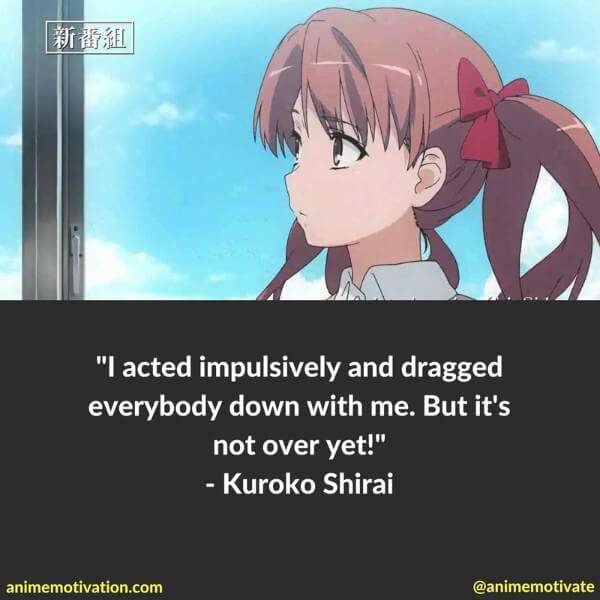 “I acted impulsively and dragged everybody down with me. But it’s not over yet!” – Kuroko Shirai 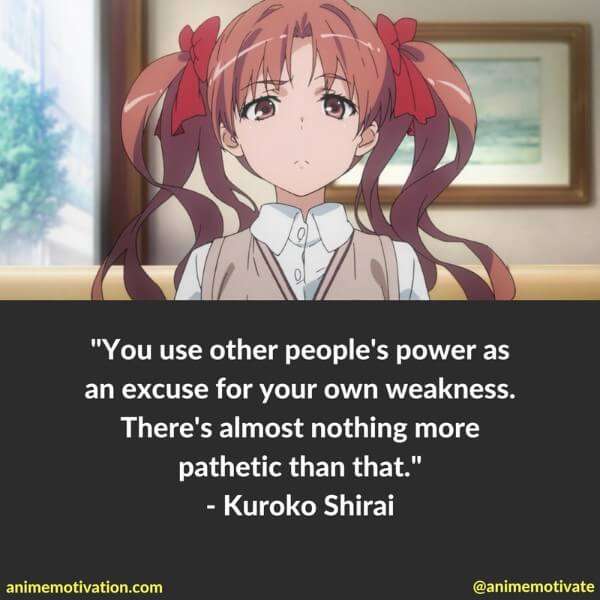 “You use other people’s power as an excuse for your own weakness. There’s almost nothing more pathetic than that.” – Kuroko Shirai 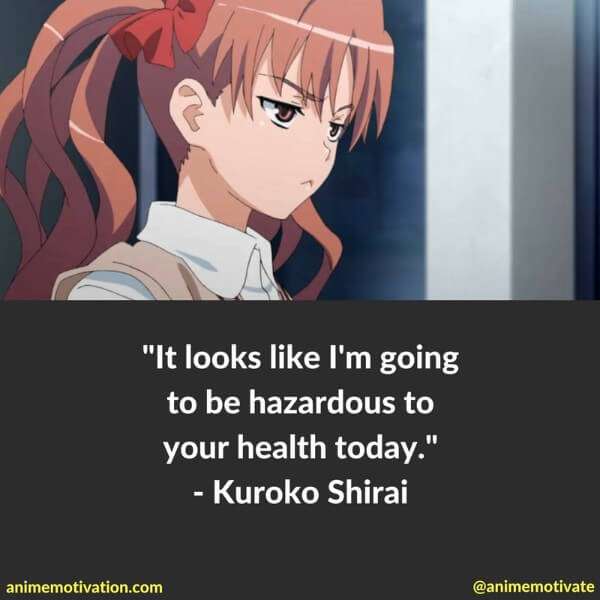 “It looks like I’m going to be hazardous to your health today.” – Kuroko Shirai 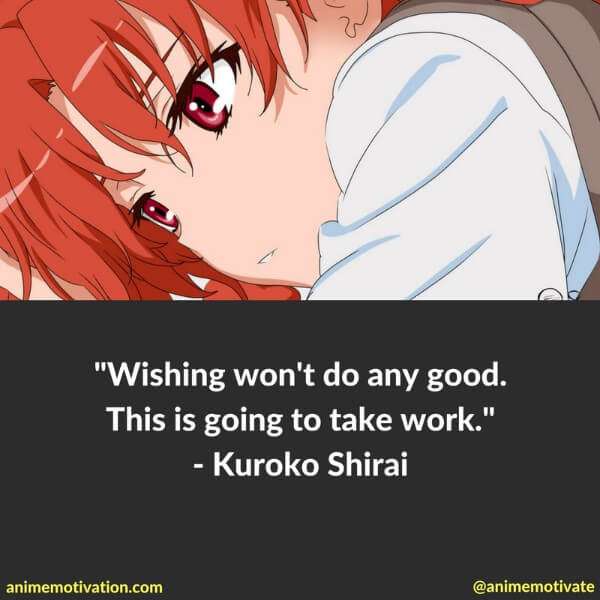 “Wishing won’t do any good. This is going to take work.” – Kuroko Shirai 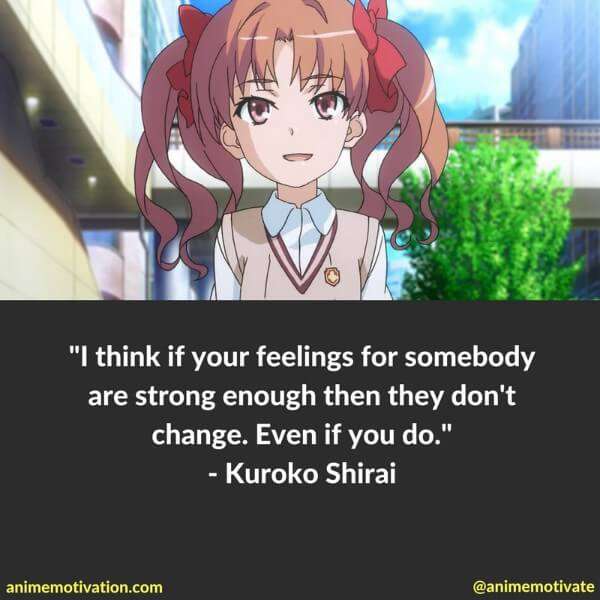 “I think if your feelings for somebody are strong enough then they don’t change. Even If you do.” – Kuroko Shirai 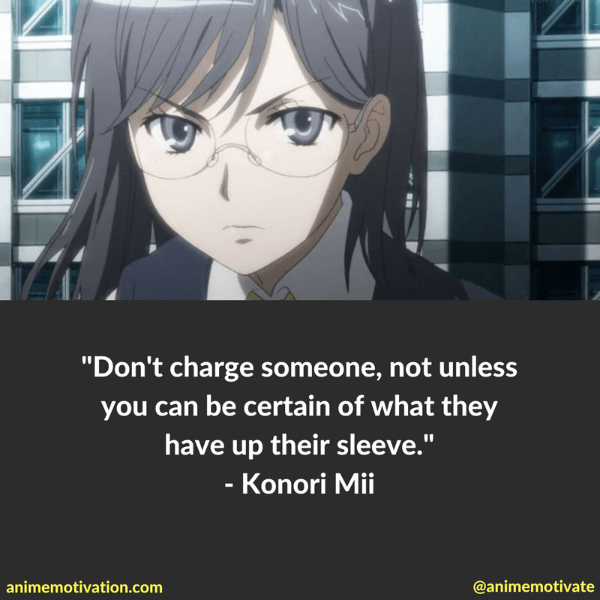 “Don’t charge someone, not unless you can be certain of what they have up their sleeve.” – Konori Mii 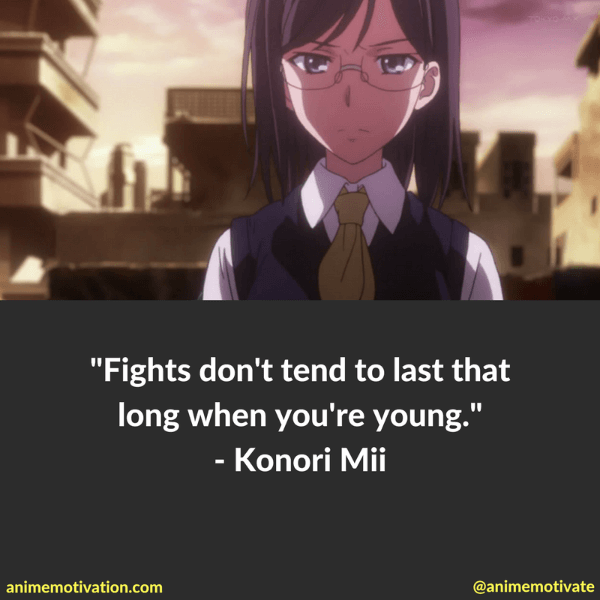 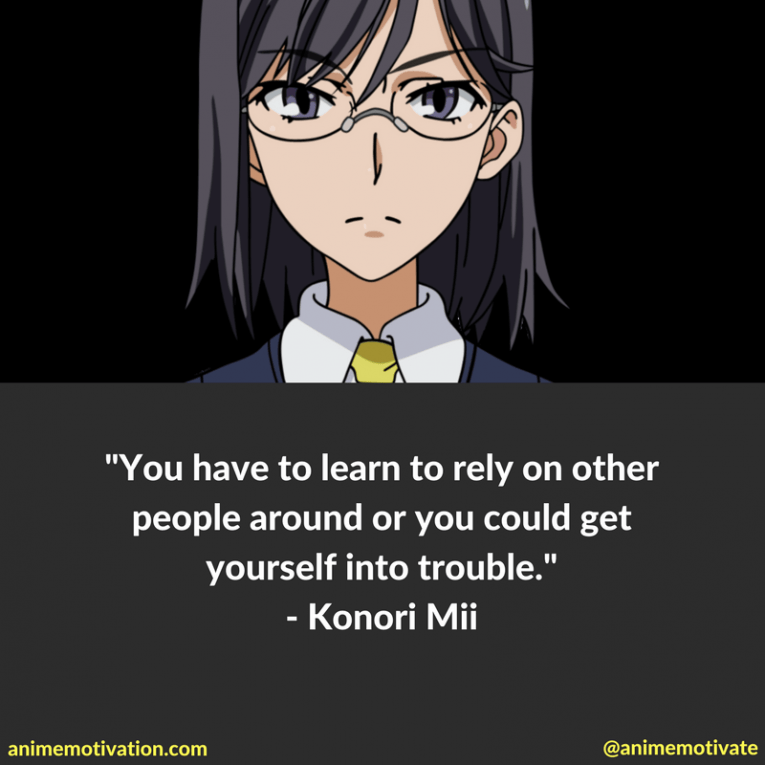 “You have to learn to rely on other people around you or you could get yourself into trouble.” – Konori Mii 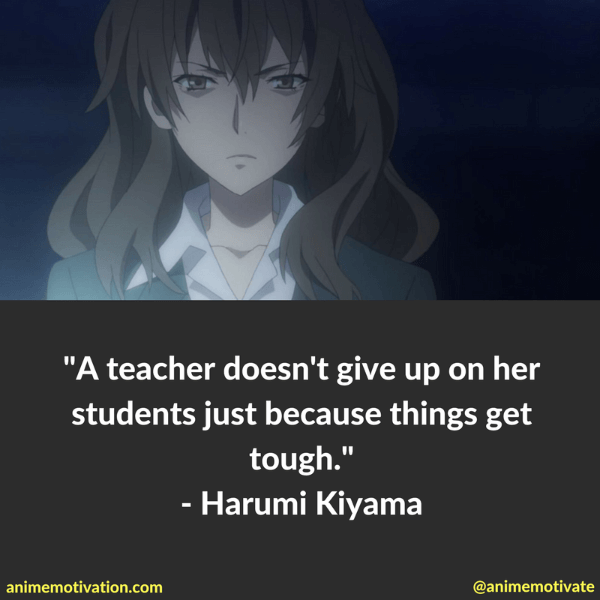 “A teacher doesn’t give up on her students just because things get tough.” – Harumi Kiyama

Which Railgun quote is your favorite?