The Garden Of Sinners quotes from the following characters:

The Garden Of Sinners, produced by Ufotable, is an action series just like the Fate series. With tons of violence, some depth, purpose to the characters and bloodshed.

And that’s what gives birth to the types of quotes you see in this series.

Here are the BEST quotes the has to offer from each character:

The BEST Garden Of Sinners Quotes: 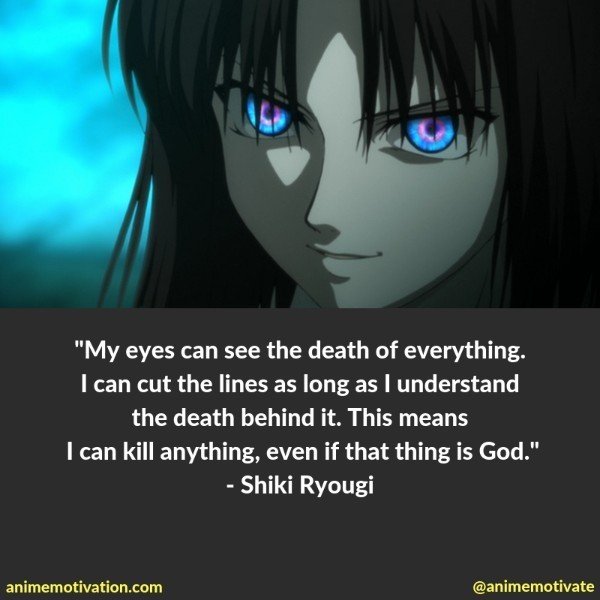 “My eyes can see the death of everything. I can cut the lines as long as I understand the death behind it. This means I can kill anything, even if that thing is God.” – Shiki Ryougi 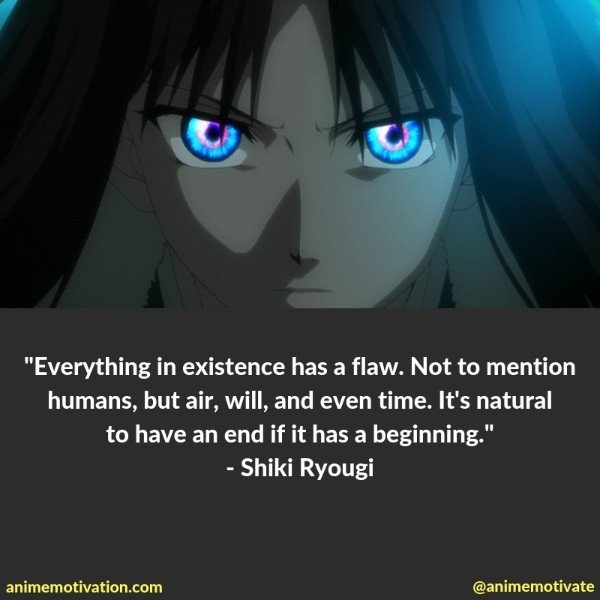 “Everything in existence has a flaw. Not to mention humans, but air, will, and even time. It’s natural to have an end if it has a beginning.” – Shiki Ryougi 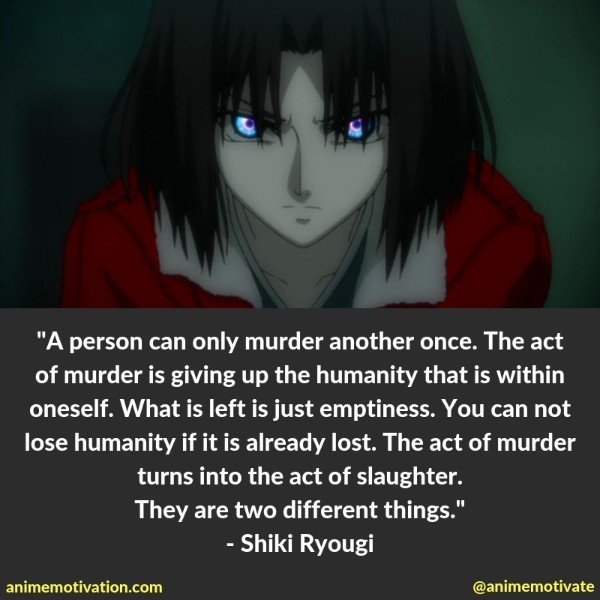 “A person can only murder another once. The act of murder is giving up the humanity that is within oneself. What is left is just emptiness. You can not lose humanity if it is already lost. The act of murder turns into the act of slaughter. They are two different things.” – Shiki Ryougi 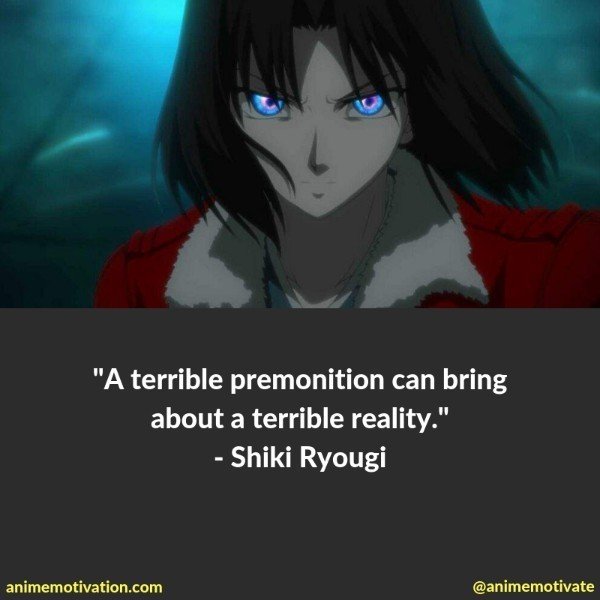 “A terrible premonition can bring about a terrible reality.” – Shiki Ryougi 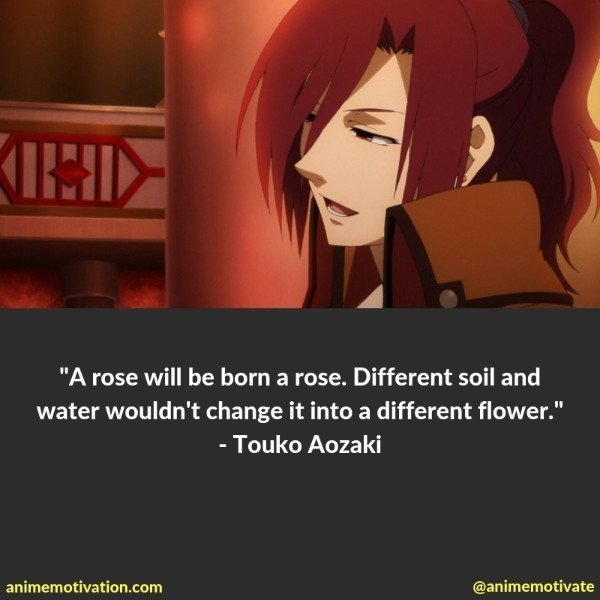 “A rose will be born a rose. Different soil and water wouldn’t change it into a different flower.” – Touko Aozaki 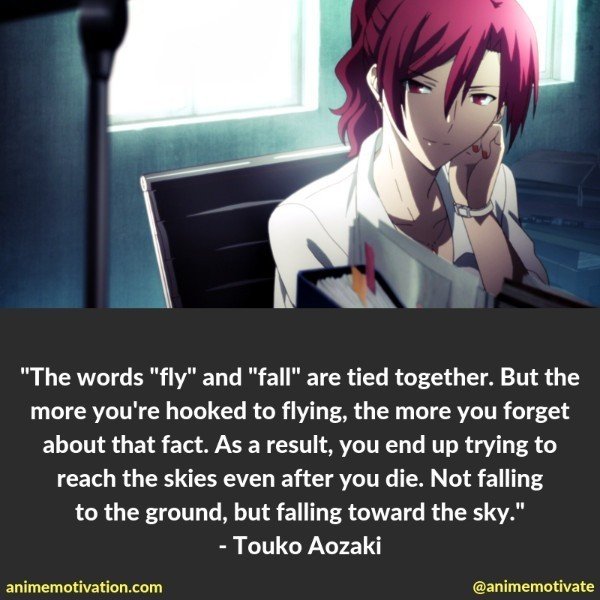 “The words “fly” and “fall” are tied together. But the more you’re hooked to flying, the more you forget about that fact. As a result, you end up trying to reach the skies even after you die. Not falling to the ground, but falling toward the sky.” – Touko Aozaki 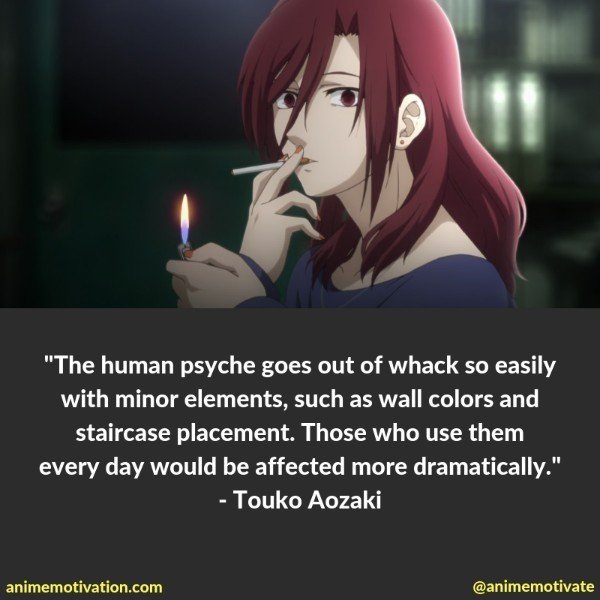 “The human psyche goes out of whack so easily with minor elements, such as wall colors and staircase placement. Those who use them every day would be affected more dramatically.” – Touko Aozaki 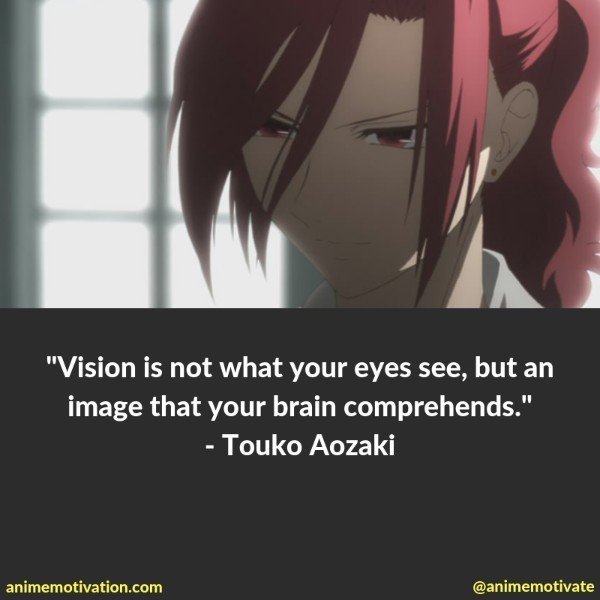 “Vision is not what your eyes see, but an image that your brain comprehends.” – Touko Aozaki 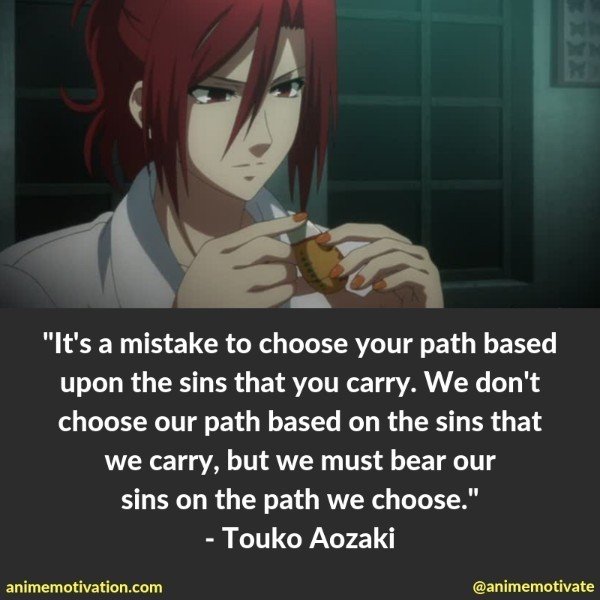 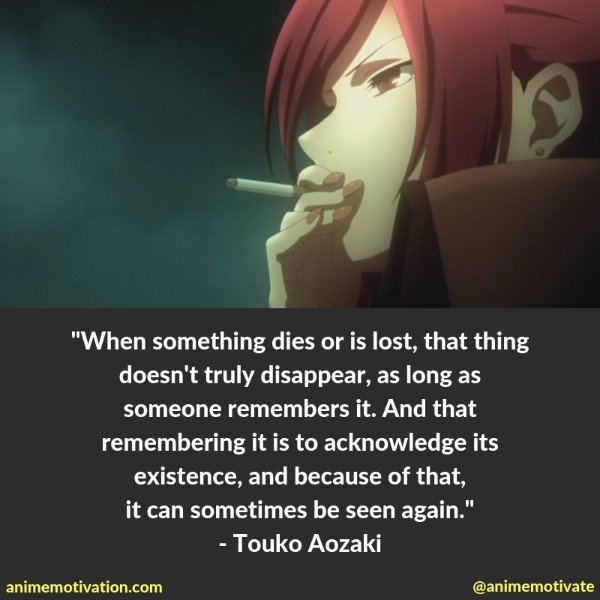 “When something dies or is lost, that thing doesn’t truly disappear, as long as someone remembers it. And that remembering it is to acknowledge its existence, and because of that, it can sometimes be seen again.” – Touko Aozaki 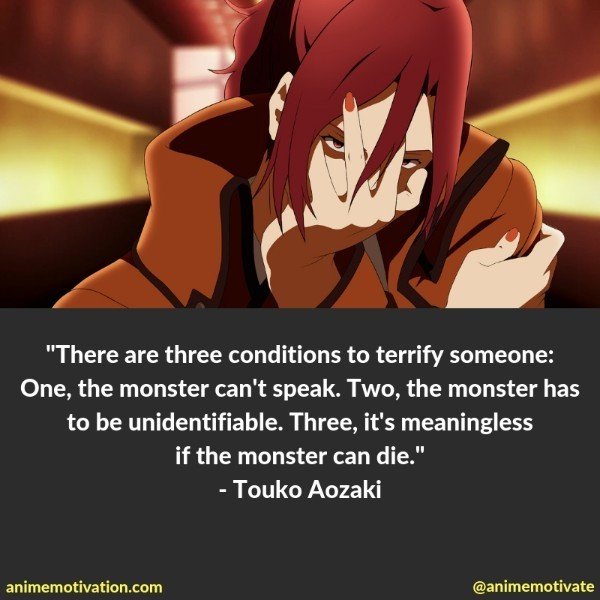 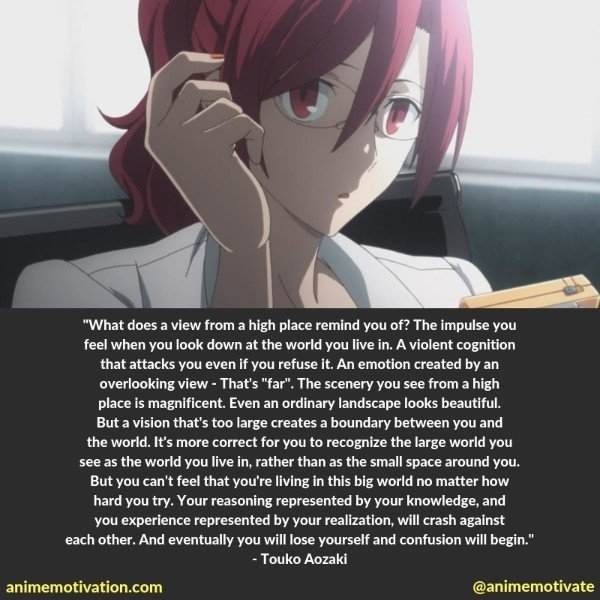 “What does a view from a high place remind you of? The impulse you feel when you look down at the world you live in. A violent cognition that attacks you even if you refuse it. An emotion created by an overlooking view – That’s “far”. The scenery you see from a high place is magnificent. Even an ordinary landscape looks beautiful. But a vision that’s too large creates a boundary between you and the world. It’s more correct for you to recognize the large world you see as the world you live in, rather than as the small space around you. But you can’t feel that you’re living in this big world no matter how hard you try. Your reasoning represented by your knowledge, and you experience represented by your realization, will crash against each other. And eventually you will lose yourself and confusion will begin.” – Touko Aozaki 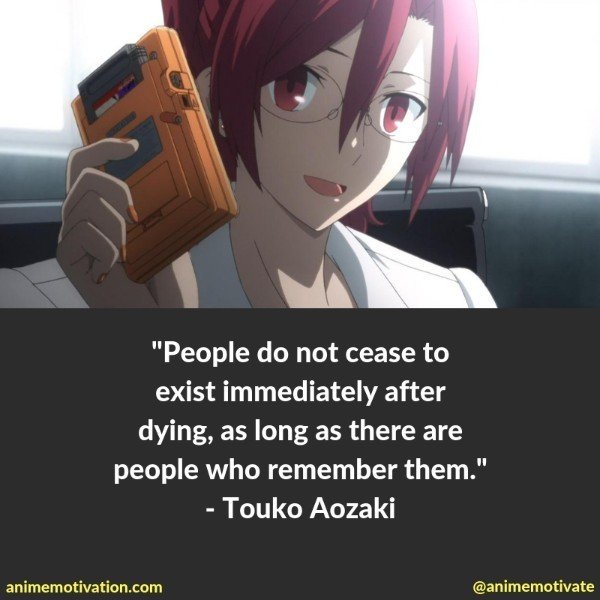 “People do not cease to exist immediately after dying, as long as there are people who remember them.” – Touko Aozaki 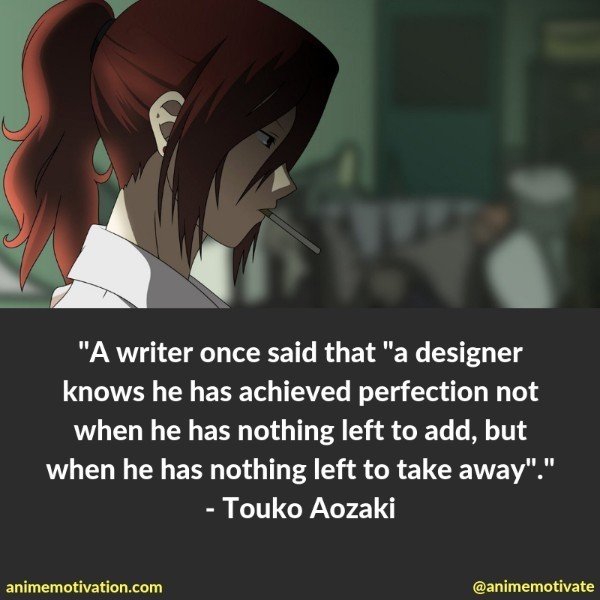 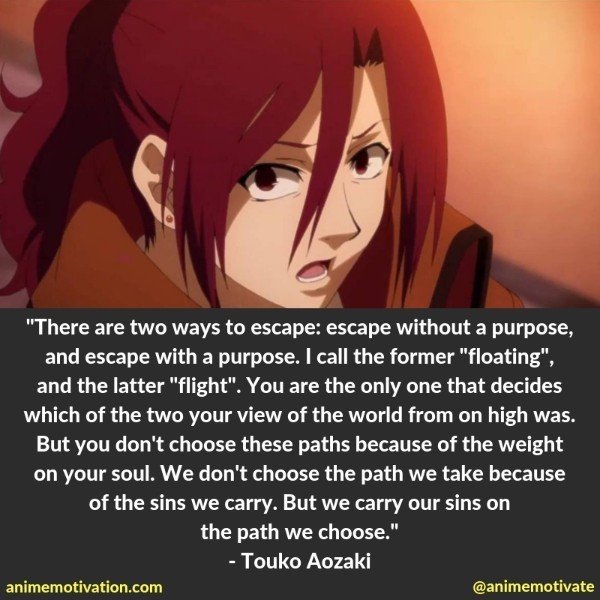 “There are two ways to escape: escape without a purpose, and escape with a purpose. I call the former “floating”, and the latter “flight”. You are the only one that decides which of the two your view of the world from on high was. But you don’t choose these paths because of the weight on your soul. We don’t choose the path we take because of the sins we carry. But we carry our sins on the path we choose.” – Touko Aozaki 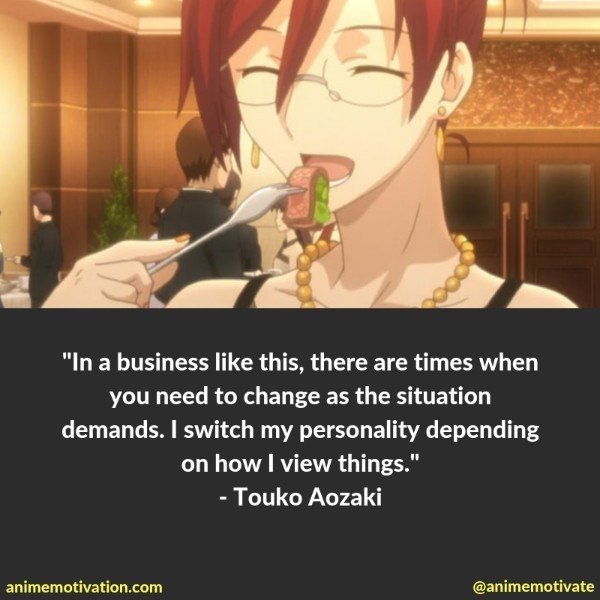 “In a business like this, there are times when you need to change as the situation demands. I switch my personality depending on how I view things.” – Touko Aozaki 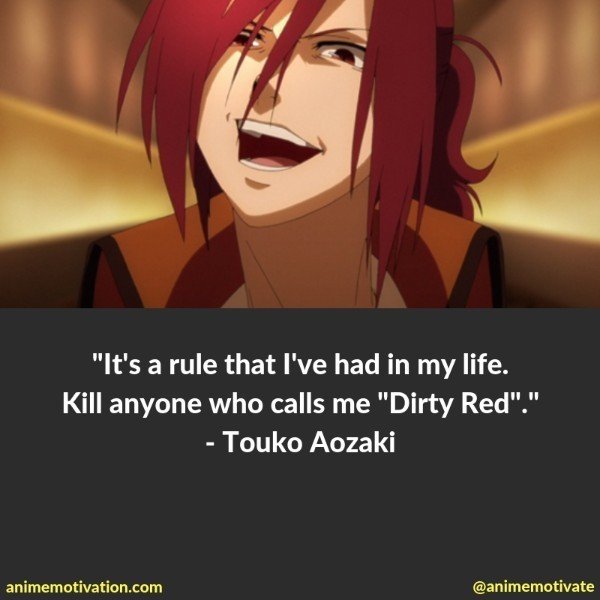 “It’s a rule that I’ve had in my life. Kill anyone who calls me “Dirty Red”.” – Touko Aozaki 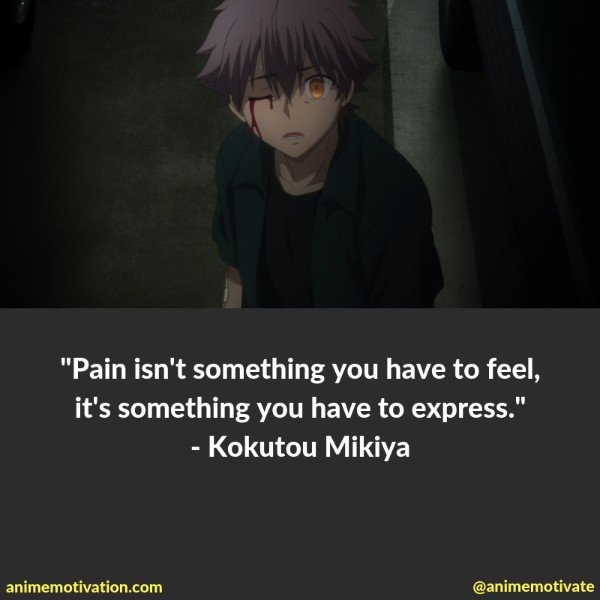 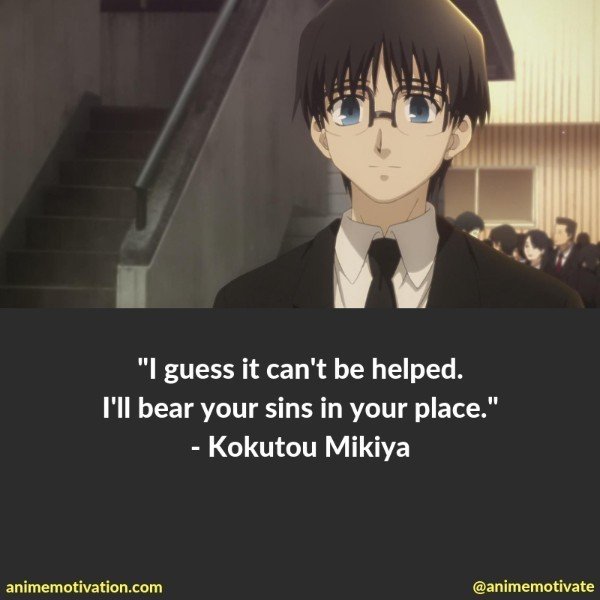 “I guess it can’t be helped. I’ll bear your sins in your place.” – Kokutou Mikiya 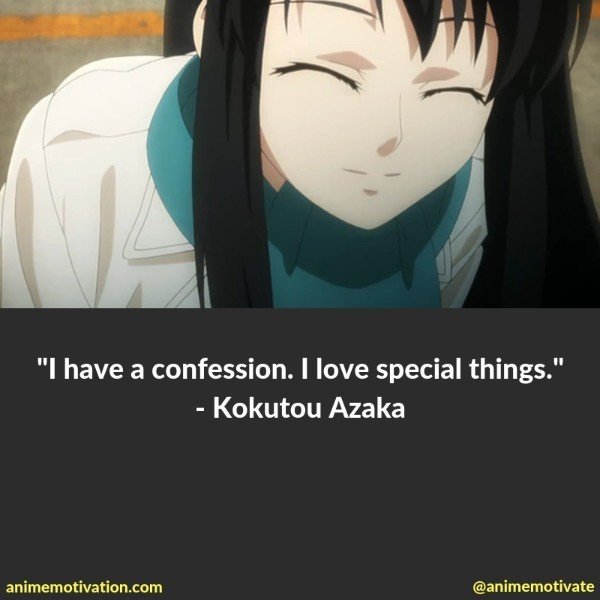 “I have a confession. I love special things.” – Kokutou Azaka 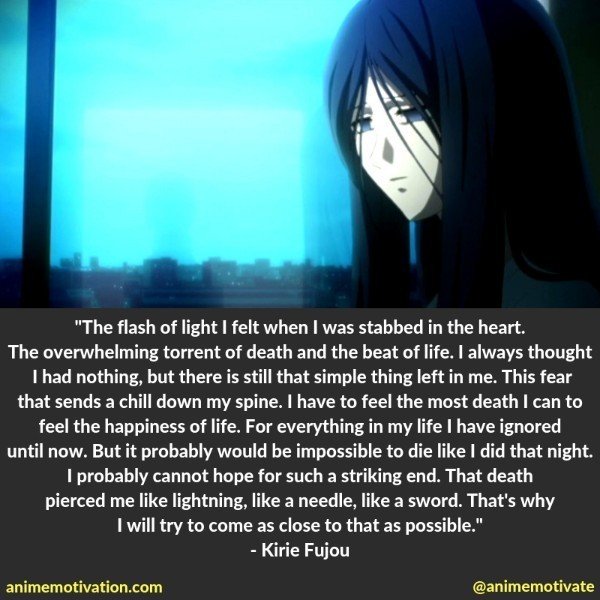 “The flash of light I felt when I was stabbed in the heart. The overwhelming torrent of death and the beat of life. I always thought I had nothing, but there is still that simple thing left in me. This fear that sends a chill down my spine. I have to feel the most death I can to feel the happiness of life. For everything in my life I have ignored until now. But it probably would be impossible to die like I did that night. I probably cannot hope for such a striking end. That death pierced me like lightning, like a needle, like a sword. That’s why I will try to come as close to that as possible. I don’t have any idea right now but I still have a few days to think about it. And I’ve already decided on the method. I don’t think I even need to say this, but I think my end should be a long fall from a place overlooking the world.” – Kirie Fujou 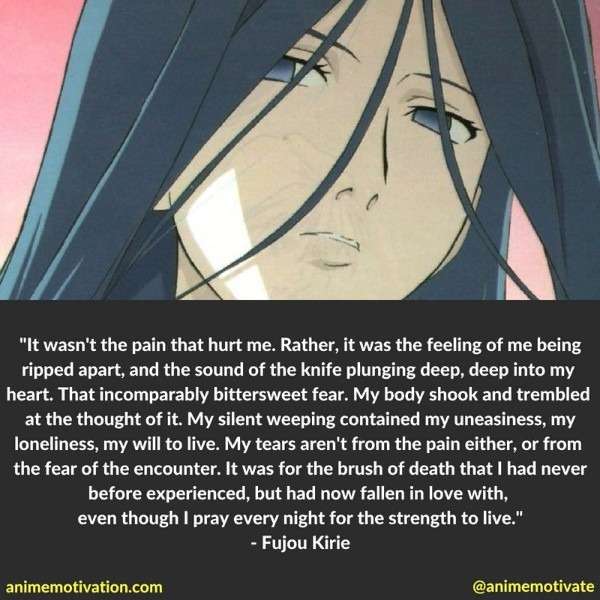 “It wasn’t the pain that hurt me. Rather, it was the feeling of me being ripped apart, and the sound of the knife plunging deep, deep into my heart. That incomparably bittersweet fear. My body shook and trembled at the thought of it. My silent weeping contained my uneasiness, my loneliness, my will to live. My tears aren’t from the pain either, or from the fear of the encounter. It was for the brush of death that I had never before experienced, but had now fallen in love with, even though I pray every night for the strength to live.” – Kirie Fujou