Traumatic anime series are a breed of their own.

And you end up walking away from them being mind blown, amazed, disheartened or shocked in some way.

For better or worse! 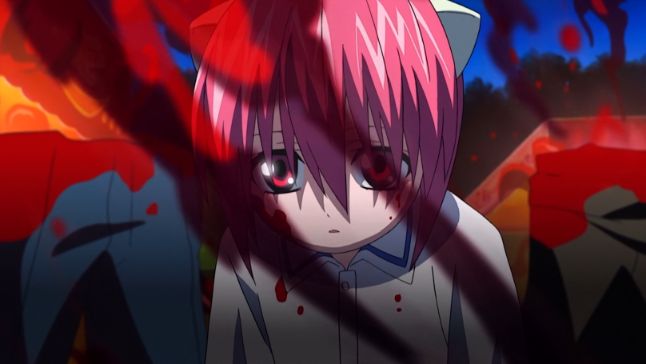 Elfen Lied is a , and is absolutely the most famous horror anime of all time. Released back in the 2000’s.

Lucy is a Diclonius. A creation of sorts that’s similar to a human but with vectors. After escaping her prison (labaroatory), she murders everyone who stands in her way.

Afterwards she washes up on a beach from the ocean. Now she has the government and those who created her trying to hunt her down and kill her.

It’s an ironic series filled with some of the most vile hypocrisy, sickening violence, and upsetting scenes.

Even animal abuse is a highlight, and a major turning point as far as backstories and how it affects characters in the story. 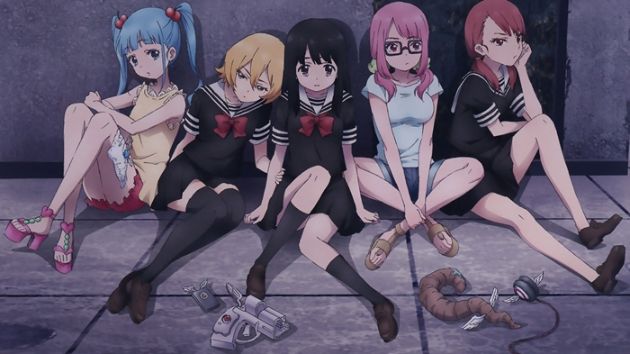 Magical Girl Site is a magical girl series released just a  few years ago. It continues the trend of brutal magical girl anime with a horrific element.

Yatsumura, one of the main characters, has the power to stop time. Asagiri on the other hand gains the power to transport anything with her gun.

Asagiri is severely bullied before becoming a magical girl. Her head is shoved into a toilet and all kinds of traumatic experiences take place.

At home, she’s abused by her older brother.

Everything about this anime at its core is traumatic. Being a magical girl is hardly the worst of it.

Relevant: These 21+ Anime Characters Have Some Of The Saddest Pasts 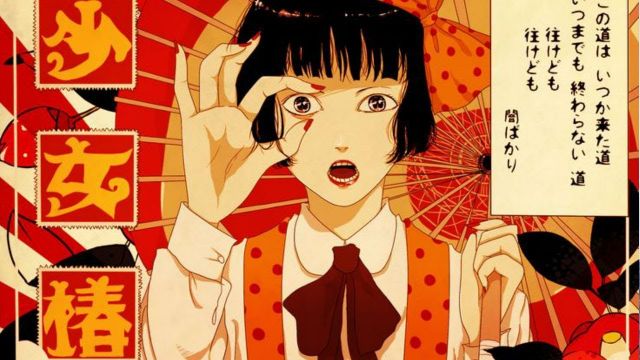 This anime movie focuses on the experiences the main character goes through. And to put it lightly: it’s horrendous.

It all starts after Midori’s mother dies, and she’s lead to a circus by a strange man who proves to be untrustworthy and a monster.

Not many anime or anime movies reach 4/10 in ratings, but this movie’s brutality and savagery is responsible.

Don’t expect the best written anime movie, but DO expect trauma at the highest level. 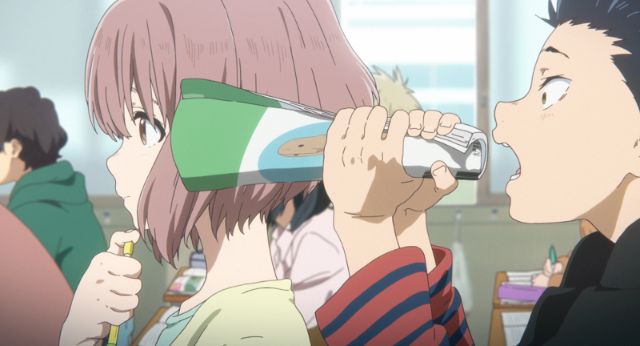 Another anime movie, A Silent Voice is about Shouko Nishimiya, a deaf disabled girl who’s pure and innocent.

At least in the beginning.

She’s savagely bullied by other classmates who don’t share her disabilities, and traumatized by her experiences.

Years later her soul is tainted by her traumatic past as a deaf girl, and it takes a toll on her mental and emotional health.

There’s a bit of a plot twist that comes later. 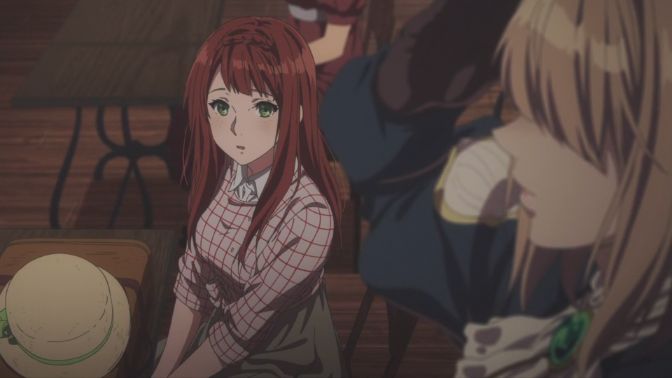 Made by Kyoto Animation, Violet Evergarden is an orphan. A girl raised by people who don’t give a shit about her wellbeing.

She’s used as a tool for war, brainwashed into a child soldier, and after her work is complete and the war is over, she’s trying to adjust to a normal life.

That proves to be difficult. She’s emotionally damaged, and is on a journey of personal development and self discovery.

Along the way through the art of writing, she helps many people overcome their own trauma’s.

Every episode has so many emotions there’s no way you can walk away not being impacted by what’s going on. Especially with the stunning visuals. 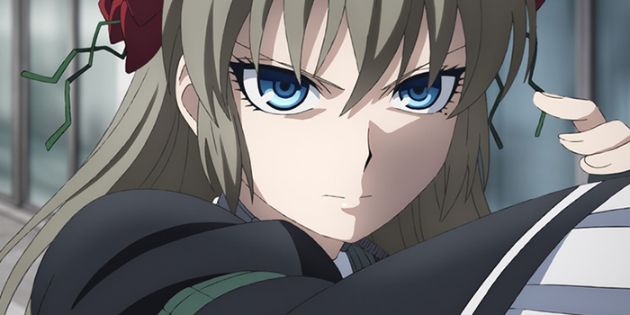 Spec Ops Asuka is a magical girl anime with and Seinen elements. It takes a different approach all together.

In fact she has PTSD but her new relationships in the new school she transfers to helps her heal her wounds bit by bit.

With the amount of violence and sickening methods villains use (and characters in general), there’s many sides of trauma to this anime. And it’s pretty heavy. 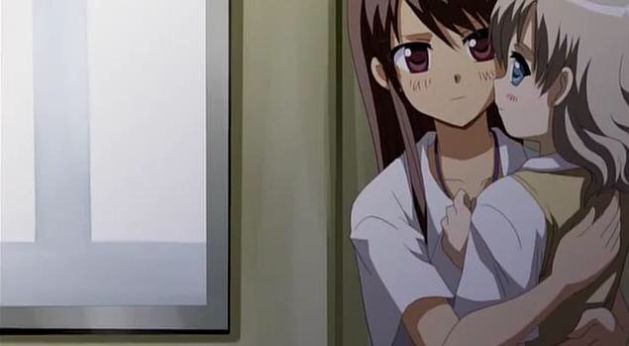 Kuttsukiboshi is a 2 episode OVA Yuri series. For a short series, the amount of traumatic and f*cked up things that happen is extreme.

In a nutshell you can expect:

And things of that nature that happen simultaneously.

It’s rated in the low 6’s on MAL for what it’s worth, and that’s because of how the story is handled and the kind of things that go down within the story. 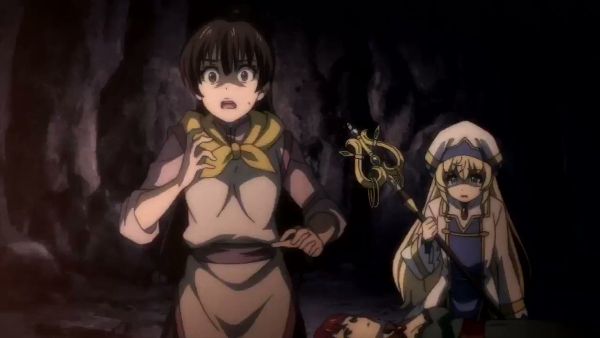 Goblin Slayers famous first episode says everything without saying a lot. It’s the source of the anime’s original controversy.

From episode 1 you get:

And of course – violence from none other than the GOBLINS of this series.

Even though the rest of the anime has violent episodes, the traumatic parts are mostly stacked into episode 1.

The series is by White Fox Studios.

17+ Of The Best Horror Anime That Will Get You Invested 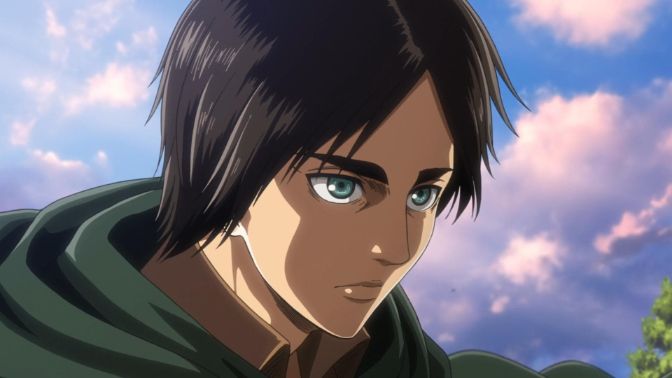 Attack On Titan hardly needs an introduction. It’s too big of an anime at this point with one of the most anticipated seasons.

With the first season you get trauma in the first episode. Eren’s mum meets her end at the hands of a titan.

She’s eaten alive, and all Eren can do is watch in horror because he’s too weak to do anything about it.

There are plenty more traumatic episodes to witness over the course of 4-5 seasons. The anime’s built on this.

It’s part of what makes AOT what it is. 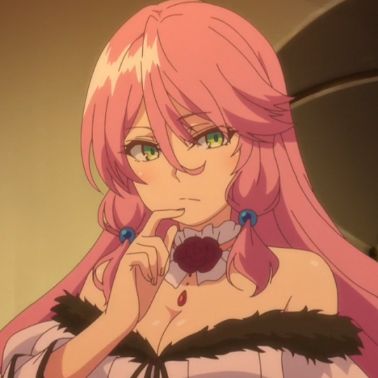 Redo Of Healer is the anime all platforms refused to air, except one called HDIVE by Sentai Filmworks.

With the anime’s theme being based on revenge at the hands of a MAN who was victimized by a woman… It’s only natural people are offended by it.

The man (Keyaru) returns the punishment back to his oppressor after all (r*pe, violence, etc).

It’s relatable in that way, but it’s extreme so you better have the stomach for it. 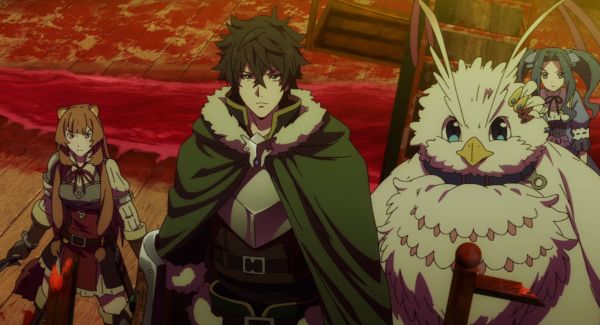 Naofumi Iwatani is falsely accused of R*PE not too long after he’s summoned to another world.

Now the whole kingdom believes Naofumi is a r*pist, and no one questions whether it’s true or not. They just believe it is because a woman said it.

Living his life in this new world while being oppressed and ostracized, depression settles in, and Naofumi struggles from the inside out.

That starts to change a little after finding a new companion who happened to be an ex-slave.

They take comfort in each other’s pain, and help each other through it. But there’s more to the story than just this.

12. Higurashi: When They Cry 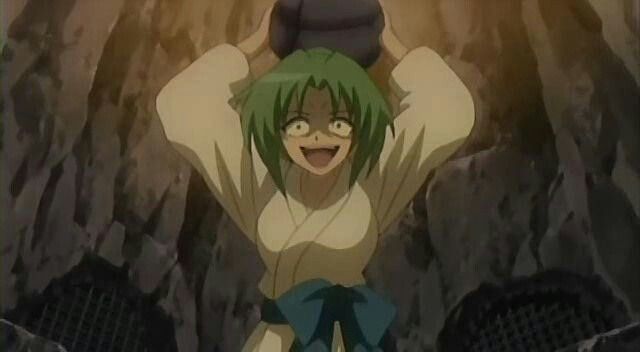 Higurashi is a masterpiece of a horror series, or close to it in my eyes. It’s 2nd to Elfen Lied for its popularity.

Based in a cursed village called Hinamizawa, people mysteriously die as a result of Oyashiro’s curse. A supposed demon.

Or in other cases – suicide, it’s always a savage death. Sometimes people are driven out of their mind seemingly.

Higurashi is what you get when you throw a bunch of characters into a setting, and pull some strings to provoke a reaction out of each person. 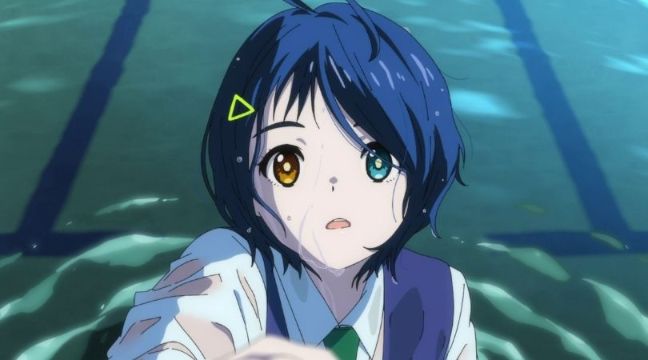 Wonder Egg Priority is about the traumatic experiences of 4 , and their “friends” in the series.

In Ai Ohto’s case, her friend commits suicide. And it weighs on her soul. Ai Ohto feels responsible.

In Rikka Kawai’s case, she had a friend who was a fan of her. The aftermath of what happens makes Rikka self harm, but there’s more to it than that.

While the anime doesn’t have the greatest ending, the main themes in general are well laid out and relatable. 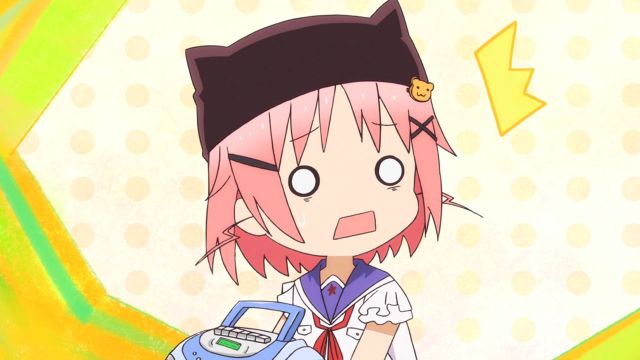 School Live, or Gakkou Gurashi is about Yuki Takeya. A pink haired optimistic and simplistic girl.

She’s jolly, see’s the sunshine in things, and is hardly ever down in the truest sense of the word.

As revealed at the end of episode 1, Yuki Takeya has a mental health condition called Psychosis. And of course – PTSD.

In the pandemic world all the characters live in, they’re forced to live inside their school and survive off rations. But it’s all starting to take a toll on everybody’s mental health.

Horror is the overarching theme, but it’s layered with so much more and is a distinctive series. 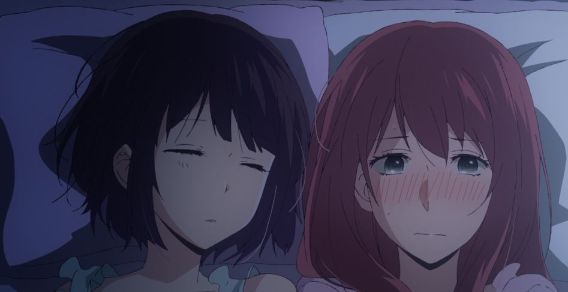 Scum’s Wish is a romance anime unlike any other over the years. It’s not exactly a masterpiece, but it depends on who you ask.

This anime at its core is about immoral acts and behavior between its characters. All relating to sex and romantic relationships.

Being underhanded, playing dirty, lowering your standards… It’s things like this that the anime dives into in a sexual/romantic kind of way.

It’s best to watch to see for yourself and to avoid being spoiled. 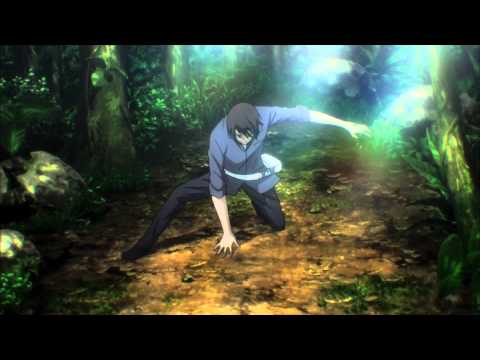 Btooom! is a survival series which is where it gets its trauma from.

Imagine being thrown on a random island out at sea, and forced to take part in some kind of death match not long after waking up from induced sleep.

Well, this is the theme of Btooom! And it naturally brings out a side to people they never thought they were capable of.

Things like R*pe take place, assault, and some nasty acts that shows the underbelly of human nature. And how it changes victims, making them stronger in some cases. 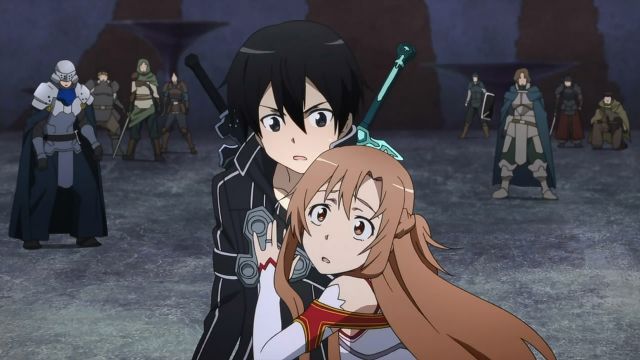 The original SAO (Sword Art Online) is all about trauma and depressing experiences for the gamers trapped in a virtual world.

Kirito, one of the game’s best players, is trapped with 1000’s of gamers who if they die in this game, they die in real life.

This drives gamers up the wall, many who go outright crazy and either kill themselves, turn to the dark side, or ally with others to survive the game.

Throughout the first season things do get a little more romantic and relaxed in some cases, but the threat is there and it does have its dark moments.

Season 2 continues this to a degree, but that changes a bit once Alicization comes into the picture. 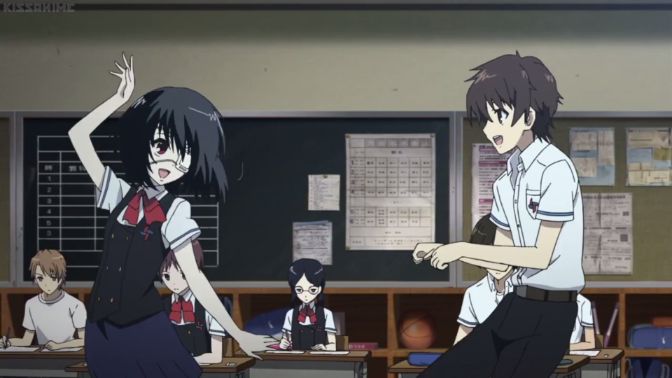 Another is a horror anime series which is also one of the most famous alongside Higurashi and Elfen Lied.

It’s about Mei Misaki, a girl with an eye patch and a strange set of eyes. There’s a realistic reason for that.

She’s joined by Sakikabara, a guy who acts more as an observer in this anime, but does play a role (he’s an MC).

Strange things are happening around them in their school and beyond. Teachers slitting their own throats suddenly, and other traumatic experiences.

They’re trying to figure out the mystery of what, why, as it all takes place.

is a classic when it comes to traumatic anime, which is something Studio White Fox is good at.

Nightraid, an assassination group was built to destroy the corrupt government and bring about a revolution.

They target high ranking officials in hopes of bringing the government down.

Each nightraid member, as well as normal people in this society are oppressed by a tyrannical government, system, and are even beheaded for disagreeing with the state of society.

Trauma is just a normal thing and that’s why the people are trying to change things on a mass scale. 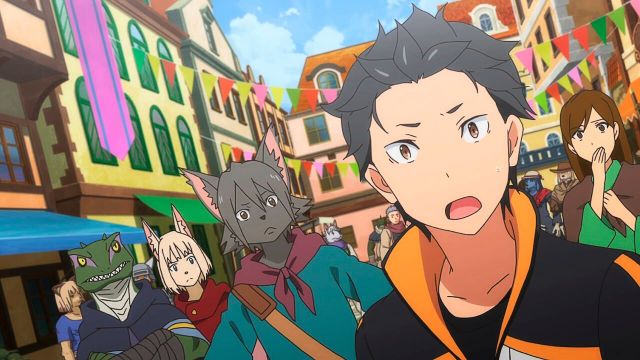 Re:Zero – Starting Life in Another World. Maybe the most traumatic anime of all time.

Subaru Natsuki is transported to another world, forced to live by its new rules, society, and disturbed things happening in the background.

After meeting Emilia, the girl he falls for, he’s killed within the first episode but comes back to life. And figures out he’s able to “return by death” up to a certain point in time.

Subaru dies so many times in the anime between season 1 and season 2, that not even can compare.

Each death is sometimes more painful and wicked than the last. And it almost crushes him as a person since even suicide will bring him back to life anyway.

He can’t escape the pain, and that’s part of the beauty of the anime. It plays into his character development and major progress.

Subaru is a realistic and relatable character, and the anime portrays that well.

The 4 Tsundere Wonders, And How They Influenced The Tsundere Trope