The end of July and especially the month of August has been all about Uzaki Chan.

This controversy that dates back to winter 2019, and the bloodrive campaign by Japanese red cross, has refused to die down after all these months.

Even during the COVID-19 pandemic.

Japan has noticed, and Kaho Shibuya, a Japanese cosplayer spoke about it in an interview with Grapee.JP

Kaho Shibuya in an interview said:

“Uzaki-chan isn’t R-18 but it has a lot of fan service scenes. Her favorite shirt says “SUGOI DEKAI (super huge)” on her chest, which is super huge indeed. Some may not be comfortable with the obvious message.

However, the argument over Uzaki reached stupidity when people on the internet tried to “fix” her, since they think she needs to have a face to go with the bosom, or her eyes and head are too big compared to her body.”

Of the sane majority who know of this controversy, we can all agree it did reach levels of stupidity.

Especially when a lot of the “critics” aren’t fans in the first place and just wanna complain for attention.

On Uzaki Chan’s criticism in general: 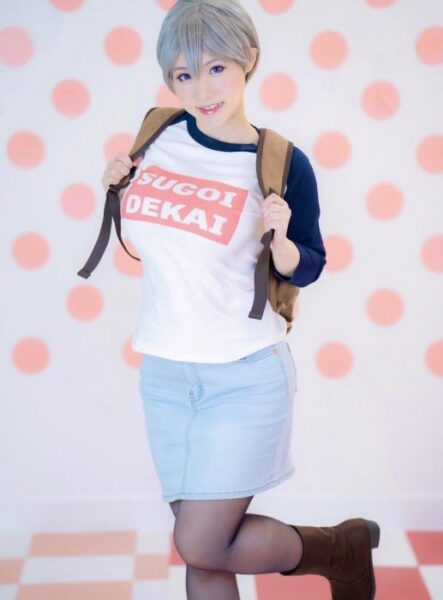 “I understand some people get repulsed by certain content, especially when they involve fan service. But Uzaki is genuinely fond of senpai and senpai enjoys her company, even though they’re both oblivious to their own feelings. It’s more a rom-com than a “harem” show in which a boy gets randomly lucky with girls.

Uzaki is , but she has never been victimized in the show as a sexual object. Just like the title says, she just really wants to hang out with senpai. She doesn’t even seduce him with her body for that. She follows him around, takes care of him when he’s sick in bed, and hypnotizes him to call her by her first name. How adorable is that?”

This coming from not just a woman, but a Japanese cosplayer from the homeland speaks volumes.

A lot of the criticism is unfounded and doesn’t hold much logic or objectivity to the arguments.

“I get it if Western people want to fix Uzaki’s teeth since I know that the “vampire fang” isn’t appreciated outside of Japan. (Here, it’s been considered even in real life.) But fixing her height, face, or the artist’s drawing style?

First of all, there are short and stacked girls with a childish face, including myself. Criticizing Uzaki‘s body type along with the face type as “unrealistic” would offend women like me.

Secondly, I’ve realized that those people complaining about Uzaki’s look are non-weebs; otherwise, they would have known that in both the eyes and the head are usually drawn bigger, the nose is often missing, and let’s not forget those impossible hair-dos.” – Kaho Shibuya

Kaho Shibuya isn’t the first to speak out as a woman in relation to Uzaki’s design.

She’s just one of the few with a “platform” to speak about it. Many women with similar bodies have spoke about it.

On Uzaki Chan being an “easy” target for haters:

“Uzaki certainly isn’t the only female character with such a curvy figure and youthful looks. She is an easy target because the media controversy over the Red Cross campaign made her the center of attention, and some people keep using her for their hateful posts to get noticed on their timelines.

For what it’s worth, the creator of “Uzaki-chan Wants To Hang Out” should be proud of the buzz it’s generating. No one’s going to talk about you unless you’re worthy of recognition.” – Kaho Shibuya

I absolutely agree. The creators have outdone themselves with this , despite how anyone feels about it.

Uzaki Chan haters and the loud minority in the west, as Kaho implied, post hateful posts for attention. But in this case it’s worked in the favor of the , and not their own agenda.

Uzaki Chan Haters, And How This Anime Girl Is STILL Causing Controversy