Atsuko Kagari’s a risk taker. The type who’s laughed at for her creative ideas, and criticized for her willingness to do the unthinkable. Especially in crazy situations.

It’s this rebellious nature that makes Atsuko Kagari relatable from a positive and negative point of view. Which helps her quotes stand out, while adding meaning to her overall story and characteristics.

If you loved Little Witch Academia’s unique animation, story and flavor, you’ll love these inspirational quotes from Atsuko Kagari! Share them on your social networks… 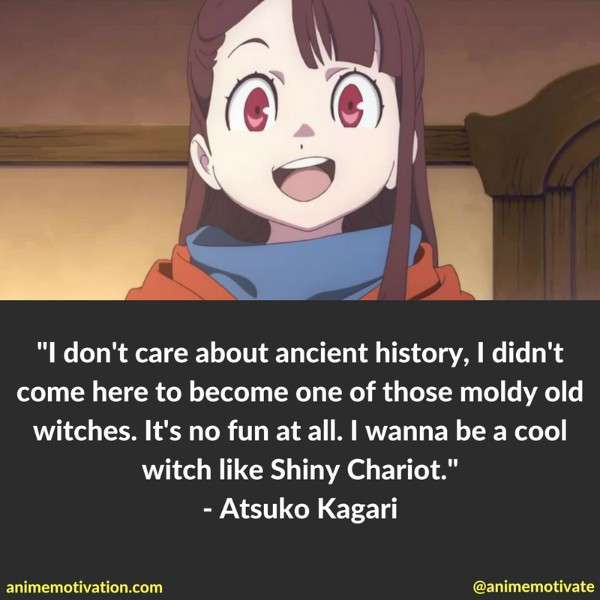 “I don’t care about ancient history, I didn’t come here to become one of those moldy old witches. It’s no fun at all. I wanna be a cool witch like shiny chariot.” – Atsuko Kagari 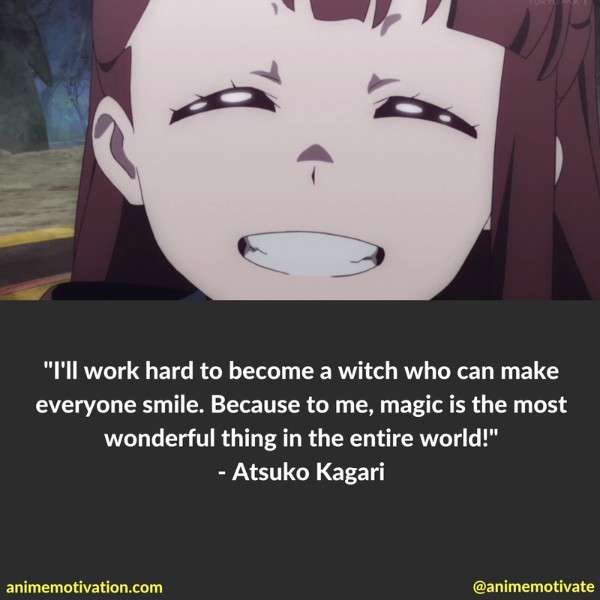 “I’ll work hard to become a witch who can make everyone smile. Because to me, magic is the most wonderful thing in the entire world!” – Atsuko Kagari 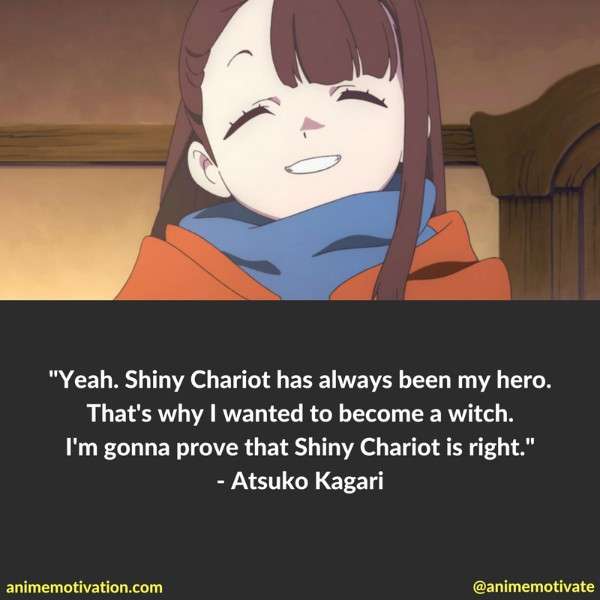 “Yeah. Shiny Chariot has always been my hero. That’s why I wanted to become a witch. I’m gonna prove that Shiny Chariot is right.” – Atsuko Kagari 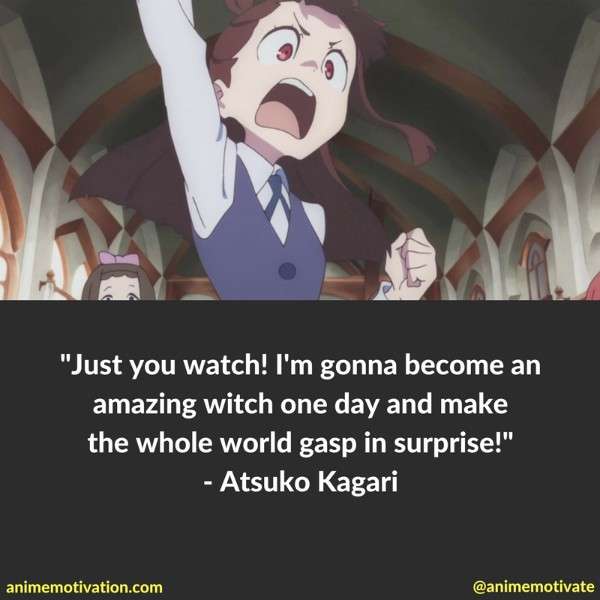 Do it because you can. And most of all: don’t let a “nobody” talk you out of doing it. 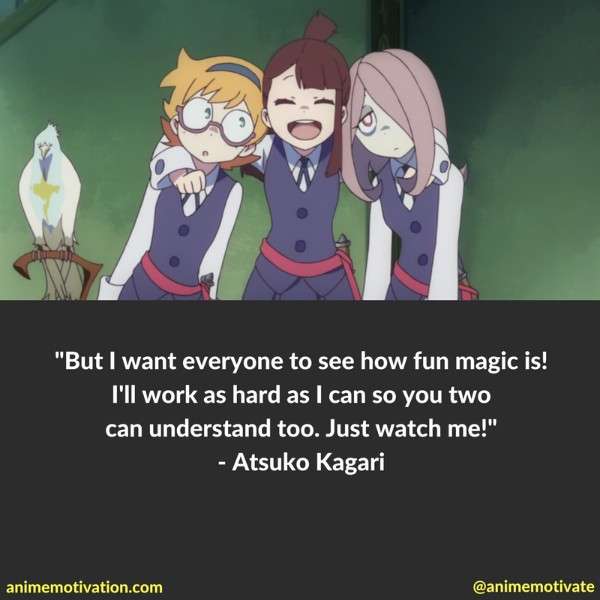 “But I want everyone to see how fun magic is! I’ll work as hard as I can so you two can understand too. Just watch me!” – Atsuko Kagari 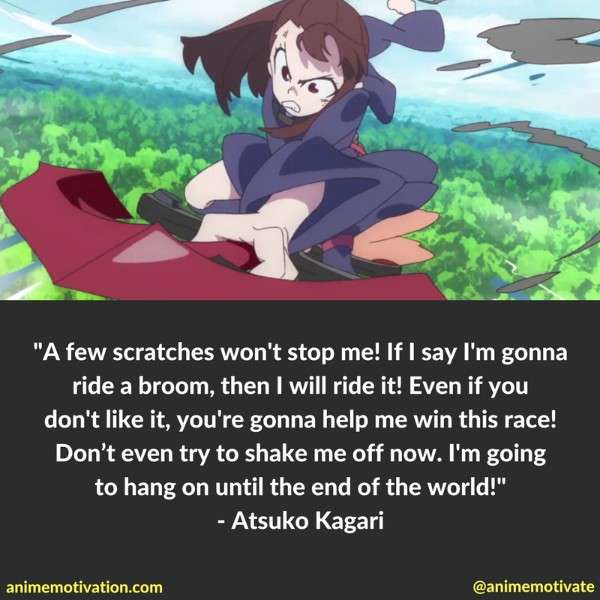 “A few scratches won’t stop me! If I say I’m gonna ride a broom, then I will ride it! Even if you don’t like it, you’re gonna help me win this race! Don’t even try to shake me off now. I’m going to hang on until the end of the world!” – Atsuko Kagari

It’s not over until you decide it is. 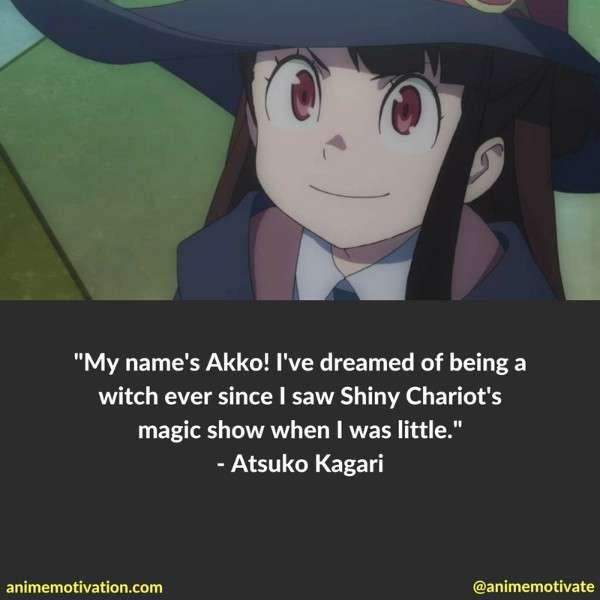 “My name’s Akko! I’ve dreamed of being a witch ever since I saw Shiny Chariot’s magic show when I was little.” – Atsuko Kagari 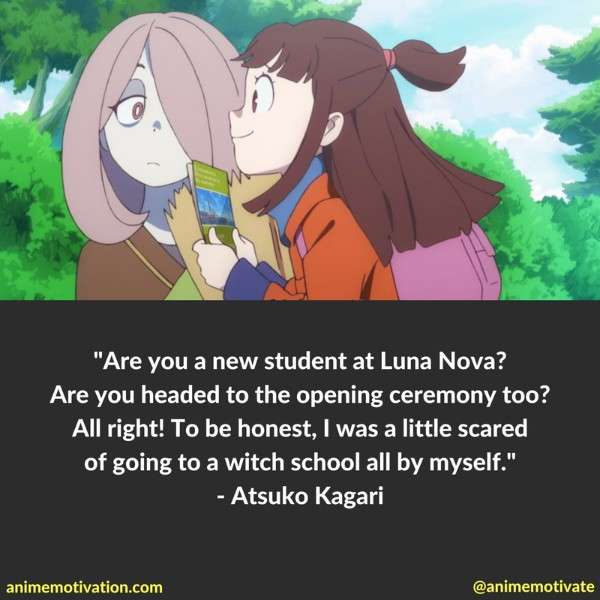 “Are you a new student at Luna Nova? Are you headed to the opening ceremony too? All right! To be honest, I was a little scared of going to a witch school all by myself.” – Atsuko Kagari

Even the great, confident Atsuko Kagari feels fear. That just means we should do it. 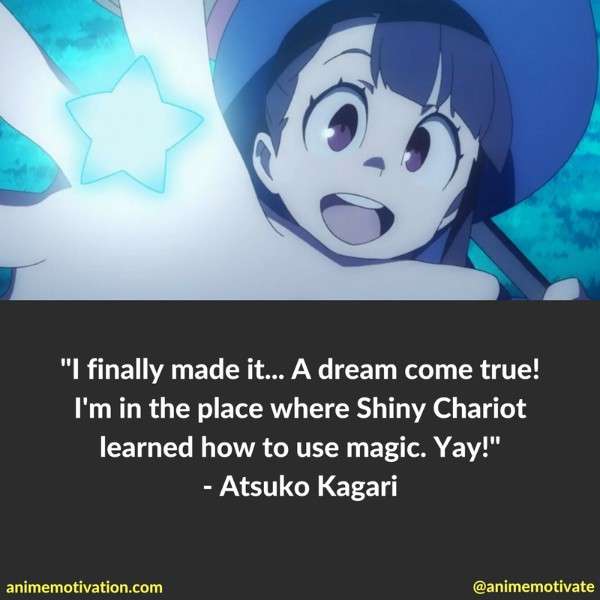 “I finally made it… A dream come true! I’m in the place where Shiny Chariot learned how to use magic. Yay!” – Atsuko Kagari

Which Atsuko Kagari quote’s your favorite?