Anime’s been growing since the boom in the 90’s. But it really started before that.

Pushing all the technical bullsh*t to the side, the 2000’s is what I’ll focus on this post. Especially from a digital point of view.

The internet can’t be ignored in pushing anime to the next level and getting it to the level it’s at today. Without it, it wouldn’t have caught on worldwide to this degree.

Not without censorship of some kind anyway (the internet makes everything available regardless).

You can view the graph and interact with it on mobile/desktop.

From the perspective of Google and the internet, which let’s face it – both are connected, Manga has been growing nicely over the years.

Google has trillions of searches so you know it’s reliable.

Around the 2010 mark Manga had a bit of a peak. I can only wonder what released that year in particular.

This can be explained by:

Not to mention social media’s eventual role in promoting manga, and of course – piracy.

Anime’s growth in popularity since 2004

If you look at manga in one obvious way. And that’s the PEAKS it has.

This is more about digital growth in particular (trends in this case).

From 2004 up until 2011-2012, anime was cruising. It didn’t “pop” during this time at all, from an internet and trends perspective. And searches on Google.

Worldwide searches by the way.

Attack On Titan, , Hibike Euphonium, , and other anime I can’t name right now came out during that time.

I’d say at least 3 of those anime played a role in the spikes, but it’s hard to say since so much more was happening and DOES happen on the internet as far as anime.

As you can see, in 2010 manga and anime was pretty close. Almost the exact same in growing popularity.

After that they split off and have both been growing, with the biggest growth coming around 2017+ onwards.

It makes sense why anime is more poplar than manga worldwide (more pirate sites as well), but for what it’s worth it’s a good look. 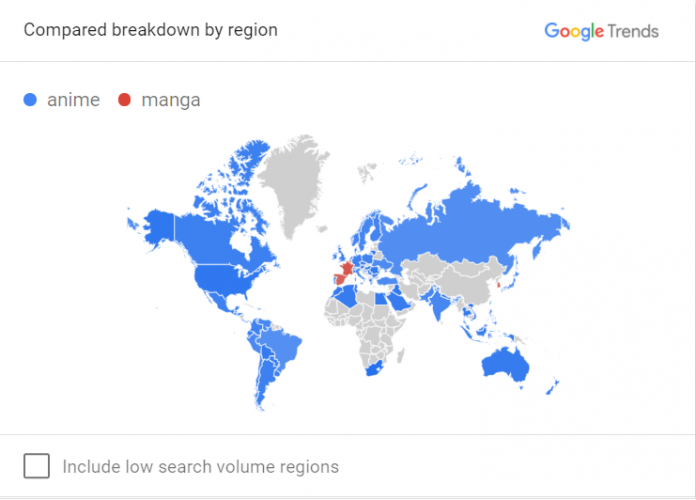 And the map shows how prevalent anime is in comparison to manga (when compared, not individually).

Anime is blue, manga is red.

The grey areas (literally) are missing data though. Must be a censorship issue in those countries.

And that’s pretty much it. A digital breakdown of anime and manga from a trends, searches and popularity point of view.

That graph line is only bound to spike again and keep going. Anime is still packing as far as potential.

How Anime Has Radically Evolved In The Past 59+ Years

Top 25 Countries Who Love Anime The Most, According To Google Trends