Panty And Stocking With Garterbelt Quotes taken from characters:

Panty & Stocking With Garterbelt is a bit of a crazy series. It’s Ecchi sprinled with fantasy, wild action, and something along the lines of for its art.

As expected with these types of series, there are character defining quotes. And even some quotes with truth to them.

Take what you will from it, or just enjoy the quotes to remind you of the .

Either way, here’s the best lines from the . 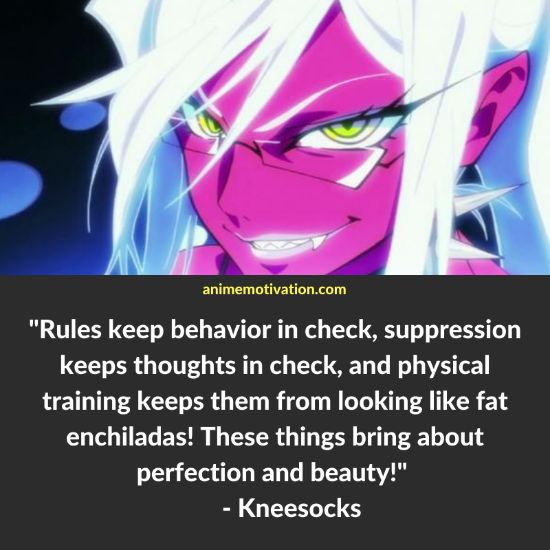 “Rules keep behavior in check, suppression keeps thoughts in check, and physical training keeps them from looking like fat enchiladas! These things bring about perfection and beauty!” – Kneesocks 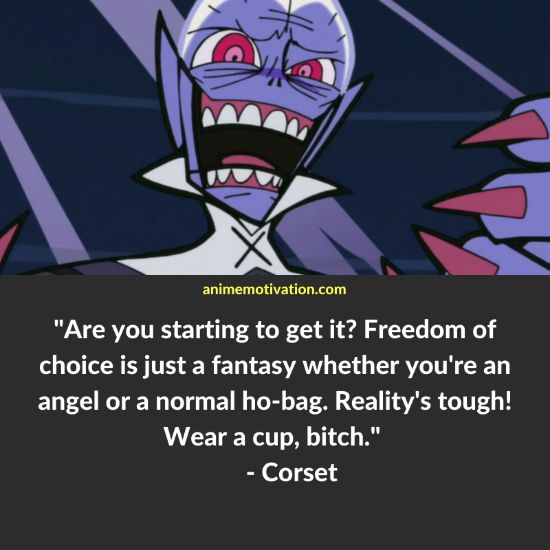 “Are you starting to get it? Freedom of choice is just a fantasy whether you’re an angel or a normal ho-bag. Reality’s tough! Wear a cup, b*tch.” – Corset 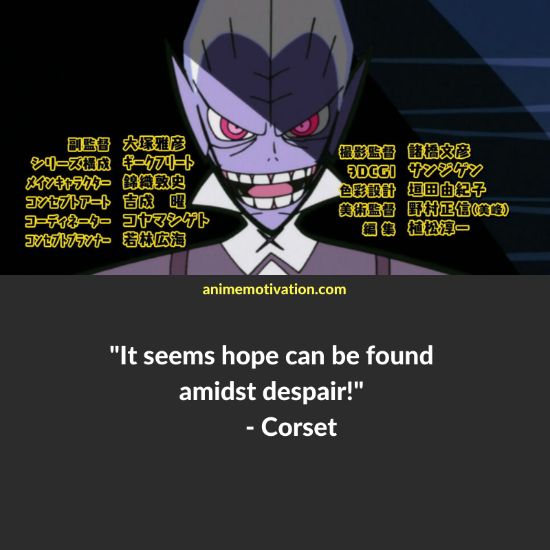 “It seems hope can be found amidst despair!” – Corset 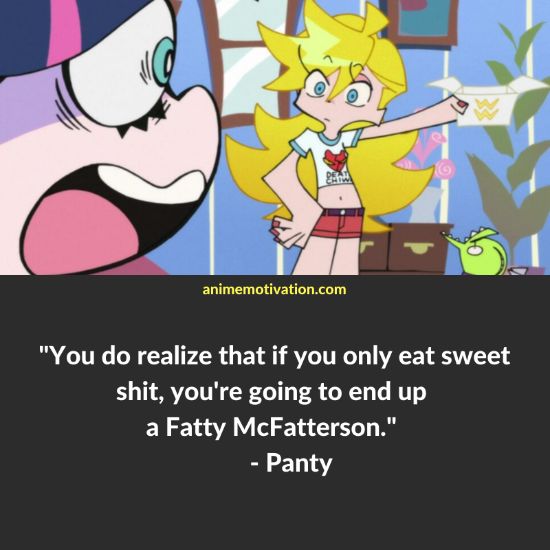 “You do realize that if you only eat sweet sh*t, you’re going to end up a Fatty McFatterson.” – Panty 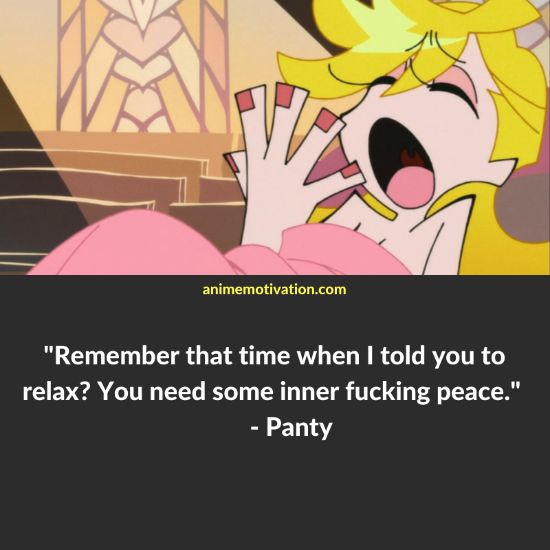 “Remember that time when I told you to relax? You need some inner f*cking peace.” – Panty 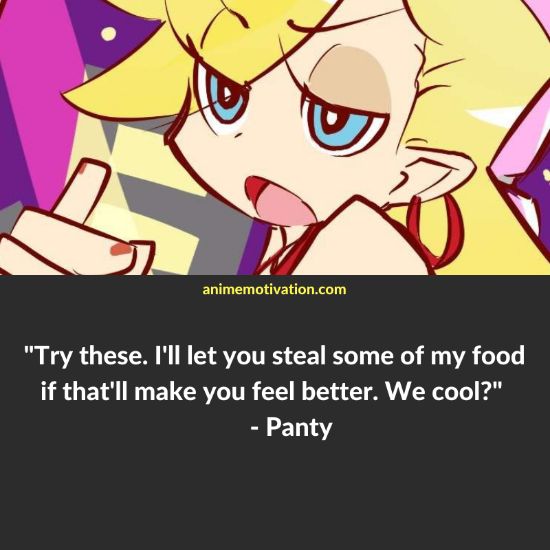 “Try these. I’ll let you steal some of my food if that’ll make you feel better. We cool?” – Panty 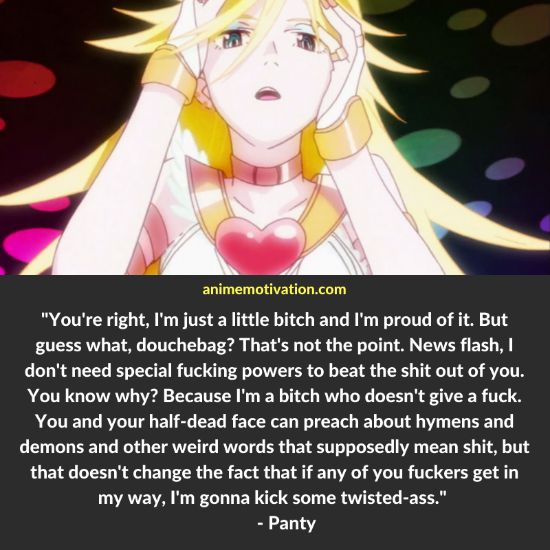 “You’re right, I’m just a little b*tch and I’m proud of it. But guess what, douchebag? That’s not the point. News flash, I don’t need special f*cking powers to beat the shit out of you. You know why? Because I’m a b*tch who doesn’t give a f*ck. You and your half-dead face can preach about hymens and demons and other weird words that supposedly mean sh*t, but that doesn’t change the fact that if any of you fuckers get in my way, I’m gonna kick some twisted-ass.” – Panty 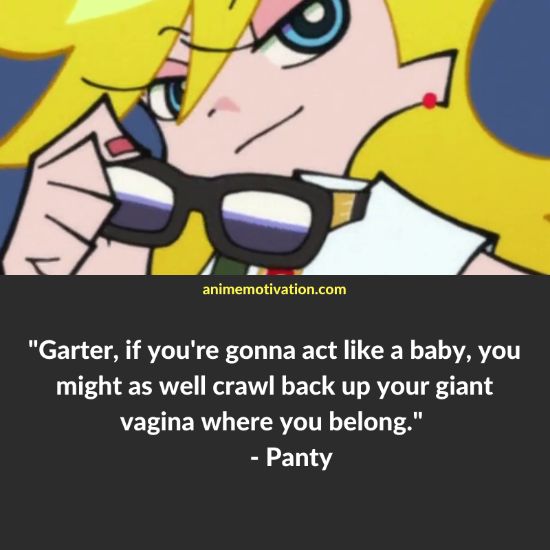 “Garter, if you’re gonna act like a baby, you might as well crawl back up your giant vag*na where you belong.” – Panty 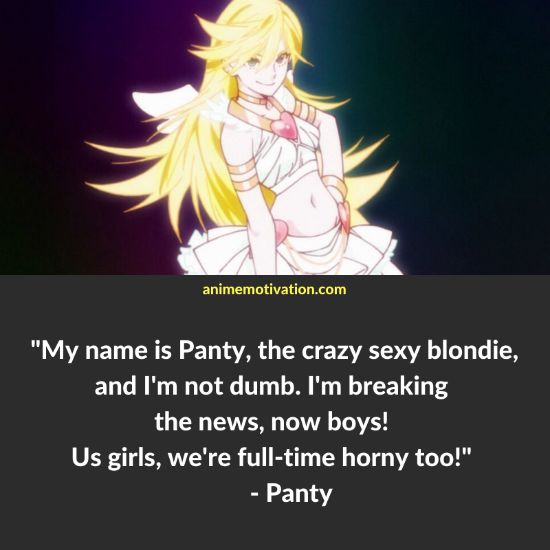 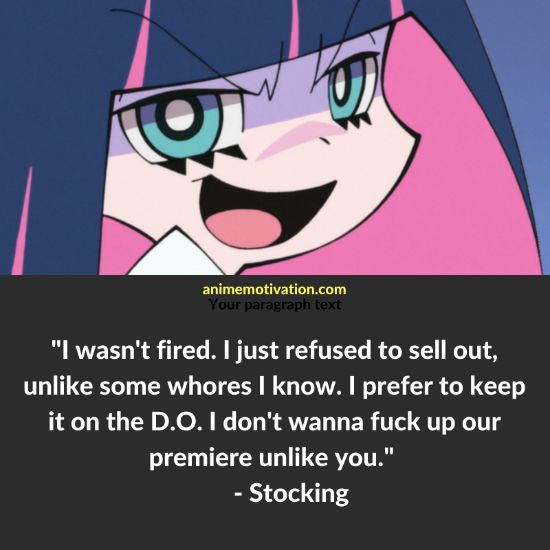 ” I wasn’t fired. I just refused to sell out, unlike some whores I know. I prefer to keep it on the D.O. I don’t wanna f*ck up our premiere unlike you.” – Stocking 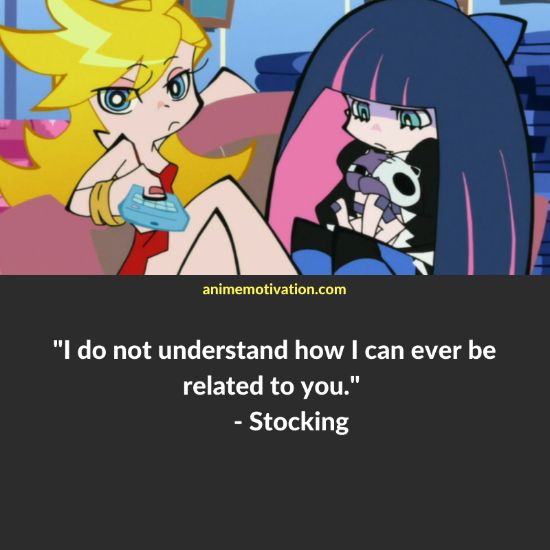 “I do not understand how I can ever be related to you.” – Stocking 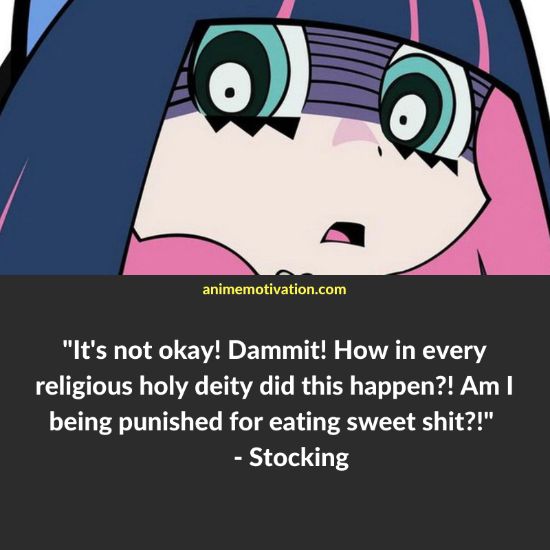 “It’s not okay! Dammit! How in every religious holy deity did this happen?! Am I being punished for eating sweet sh*t?!” – Stocking 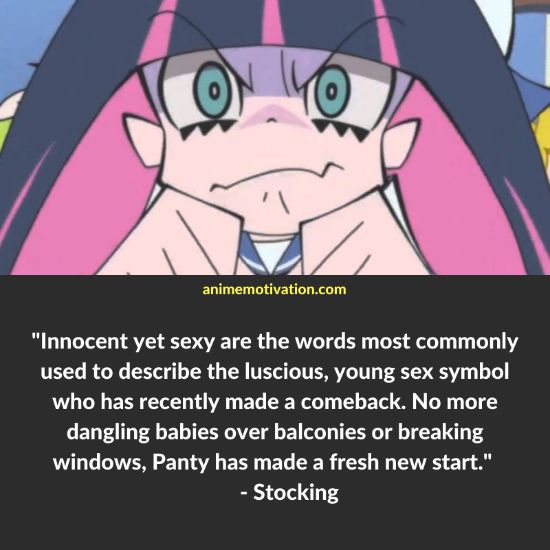 “Innocent yet sexy are the words most commonly used to describe the luscious, young sex symbol who has recently made a comeback. No more dangling babies over balconies or breaking windows, Panty has made a fresh new start.” – Stocking 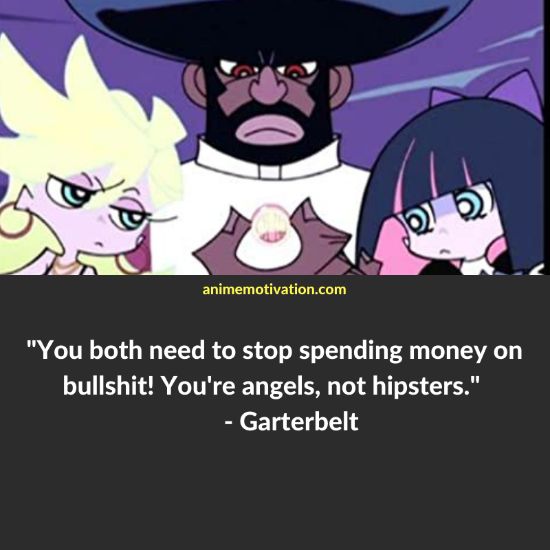 “You both need to stop spending money on bullsh*t! You’re angels, not hipsters.” – Garterbelt 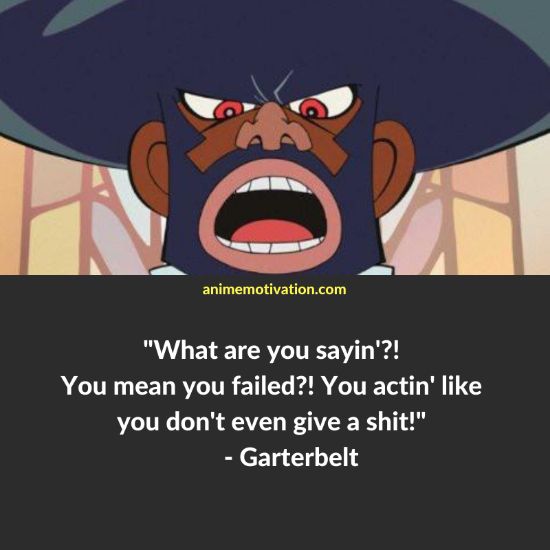 “What are you sayin’?! You mean you failed?! You actin’ like you don’t even give a sh*t!” – Garterbelt “Now, don’t forget. Angels, another mandate has arrived. Get your lazy asses to the scene, immediately! Alright, this is the part where you’re supposed to get the f*ck up!” – Garterbelt 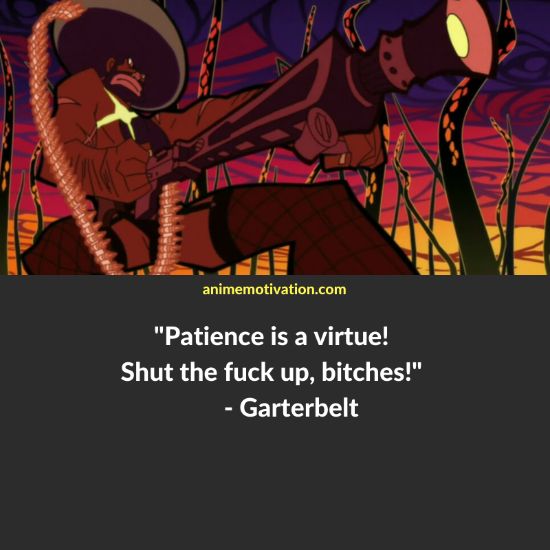 “Patience is a virtue! Shut the f*ck up, b*tches!” – Garterbelt 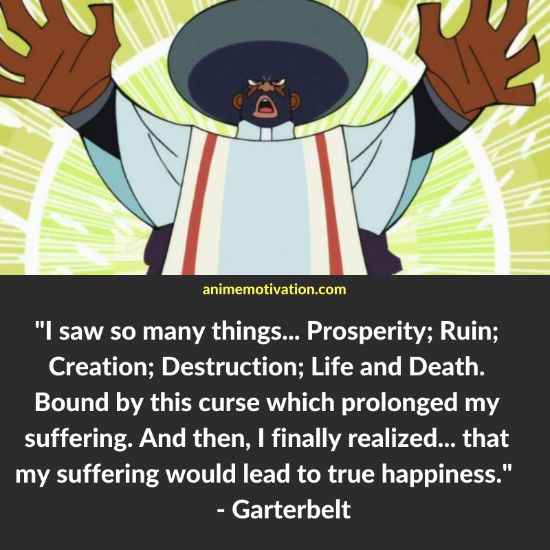 “I saw so many things… Prosperity; Ruin; Creation; Destruction; Life and Death. Bound by this curse which prolonged my suffering. And then, I finally realized… that my suffering would lead to true happiness.” – Garterbelt 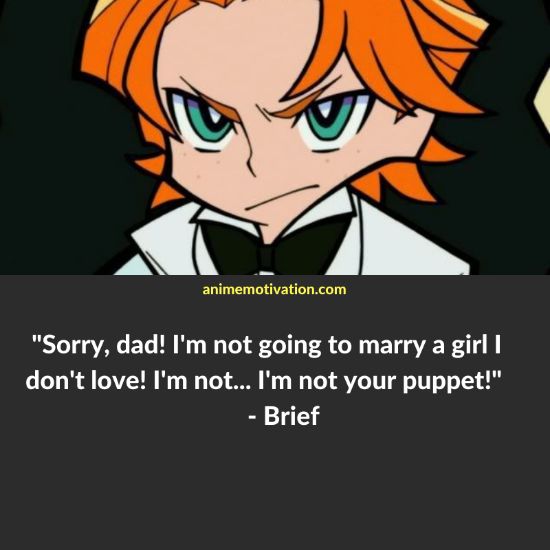