On the surface, The Melancholy Of Haruhi Suzumiya is an innocent slice of life series.

But there’s a lot more going on than you first realize. Which is why the quotes are a little more strange, entertaining and thought provoking compared to your average slice of life .

The MC: Haruhi Suzumiya is to thank for that.

Here are some of the best the has to offer. 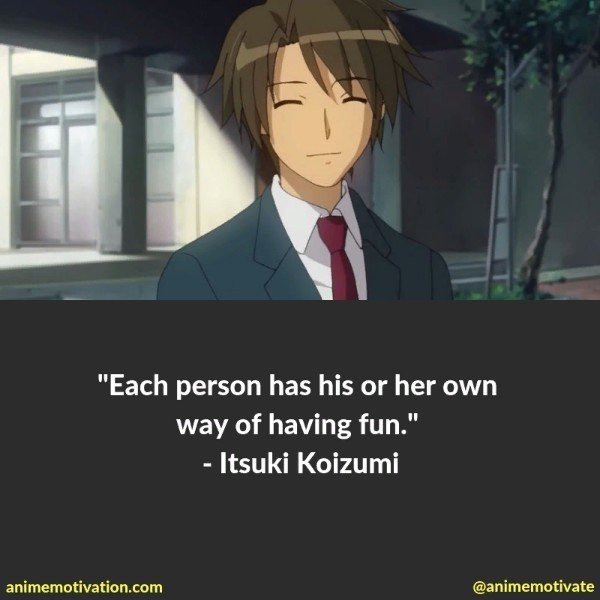 “Each person has his or her own way of having fun.” – Itsuki Koizumi 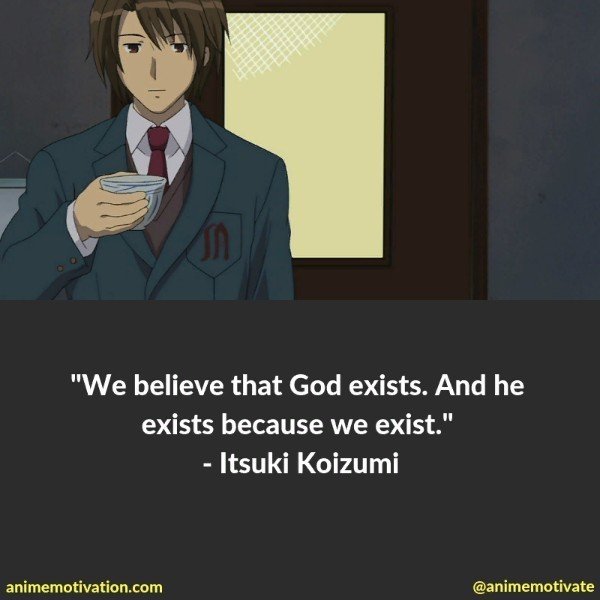 “We believe that God exists. And he exists because we exist.” – Itsuki Koizumi 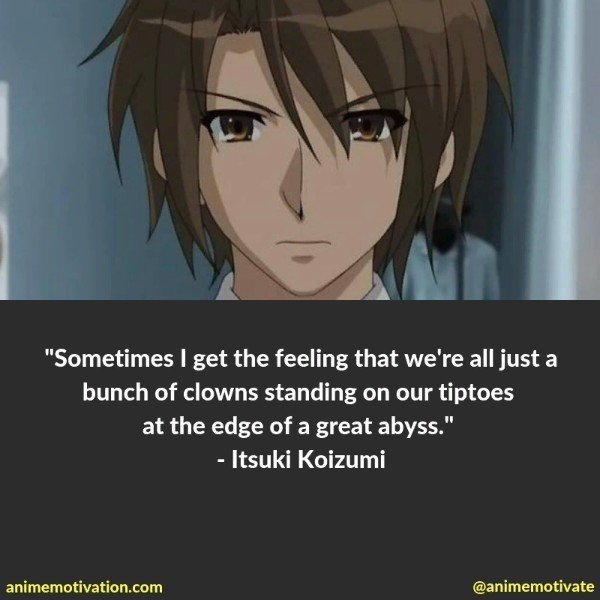 “Sometimes I get the feeling that we’re all just a bunch of clowns standing on our tiptoes at the edge of a great abyss.” – Itsuki Koizumi 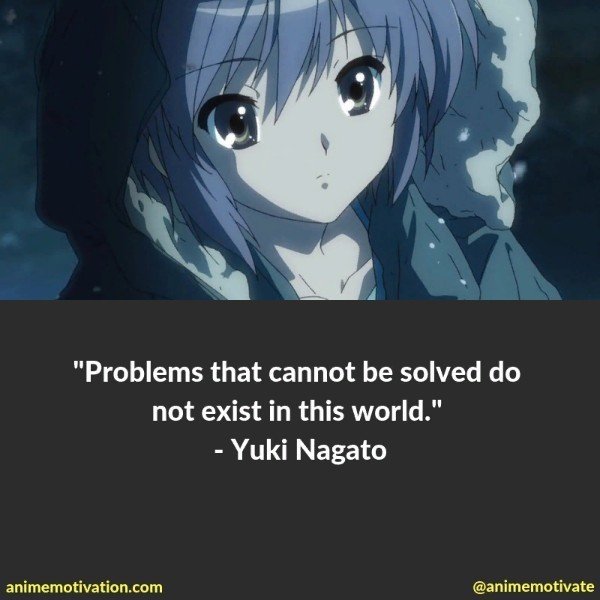 “Problems that cannot be solved do not exist in this world.” – Yuki Nagato 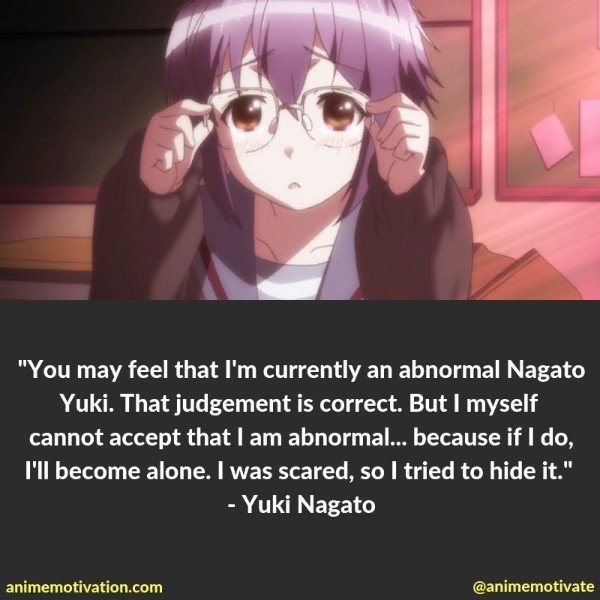 “You may feel that I’m currently an abnormal Nagato Yuki. That judgement is correct. But I myself cannot accept that I am abnormal… because if I do, I’ll become alone. I was scared, so I tried to hide it.” – Yuki Nagato 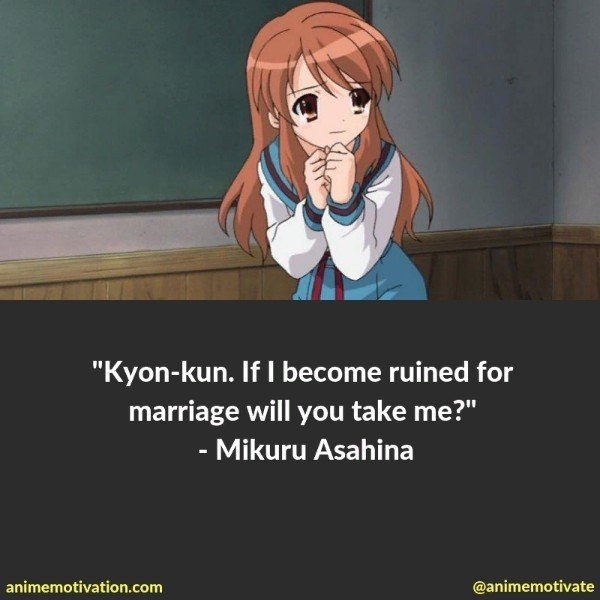 “Kyon-kun. If I become ruined for marriage will you take me?” – Mikuru Asahina 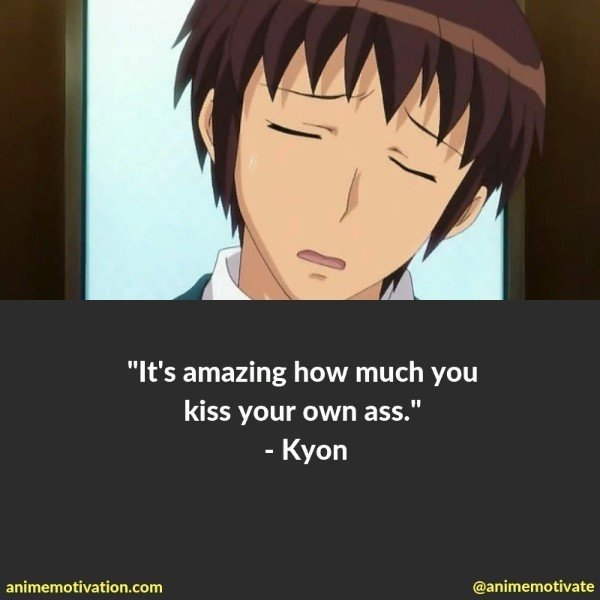 “It’s amazing how much you kiss your own ass.” – Kyon 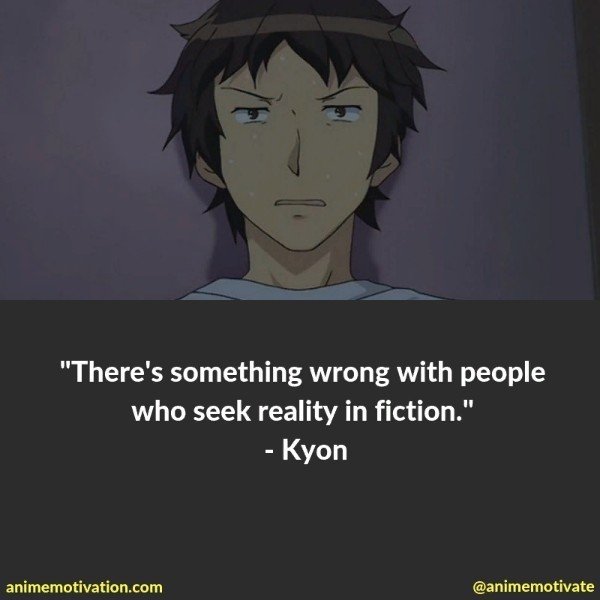 “There’s something wrong with people who seek reality in fiction.” – Kyon 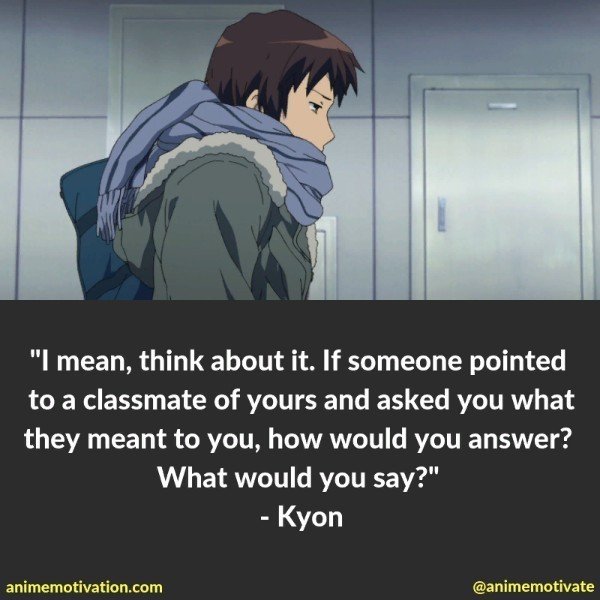 “I mean, think about it. If someone pointed to a classmate of yours and asked you what they meant to you, how would you answer? What would you say?” – Kyon 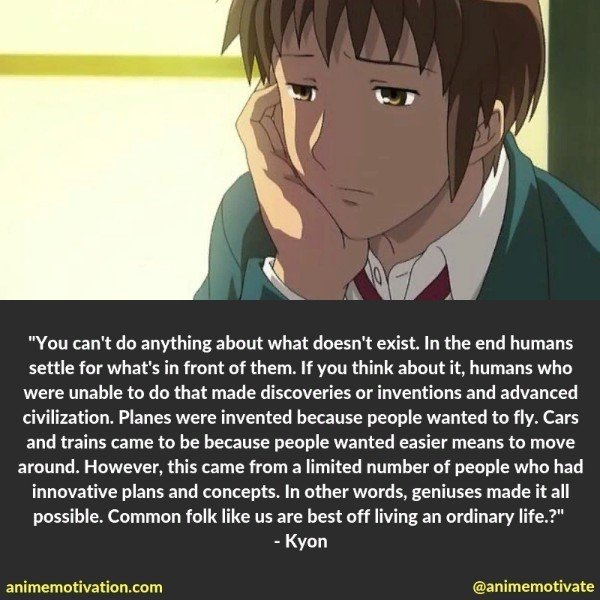 “You can’t do anything about what doesn’t exist. In the end humans settle for what’s in front of them. If you think about it, humans who were unable to do that made discoveries or inventions and advanced civilization. Planes were invented because people wanted to fly. Cars and trains came to be because people wanted easier means to move around. However, this came from a limited number of people who had innovative plans and concepts. In other words, geniuses made it all possible. Common folk like us are best off living an ordinary life.” – Kyon

“As always, this girl was thinking up all sorts of nonsensical stuff. I can’t help but wonder if there’s a black hole inside her head, since her common sense seems to come from a different universe altogether.” – Kyon 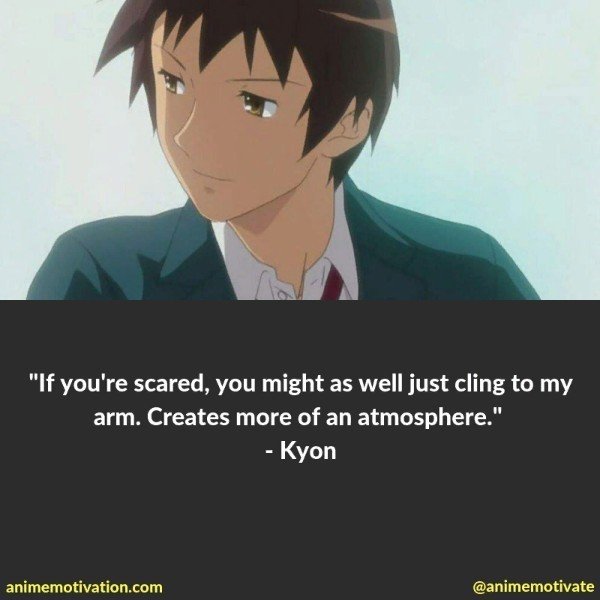 “If you’re scared, you might as well just cling to my arm. Creates more of an atmosphere.” – Kyon 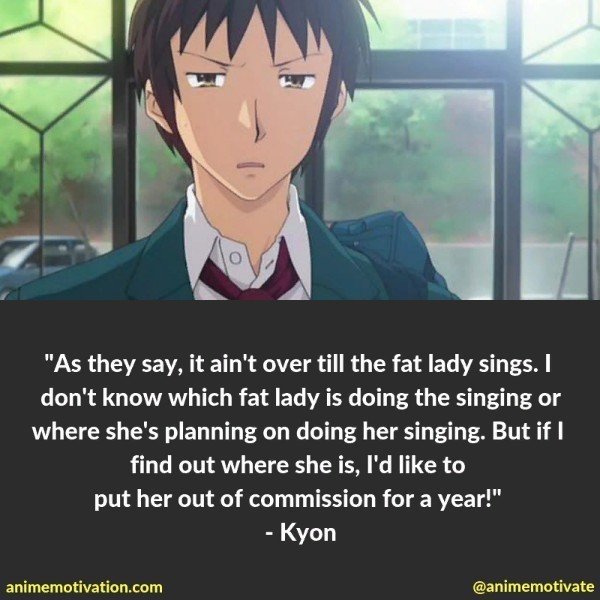 “As they say, it ain’t over till the fat lady sings. I don’t know which fat lady is doing the singing or where she’s planning on doing her singing. But if I find out where she is, I’d like to put her out of commission for a year!” – Kyon 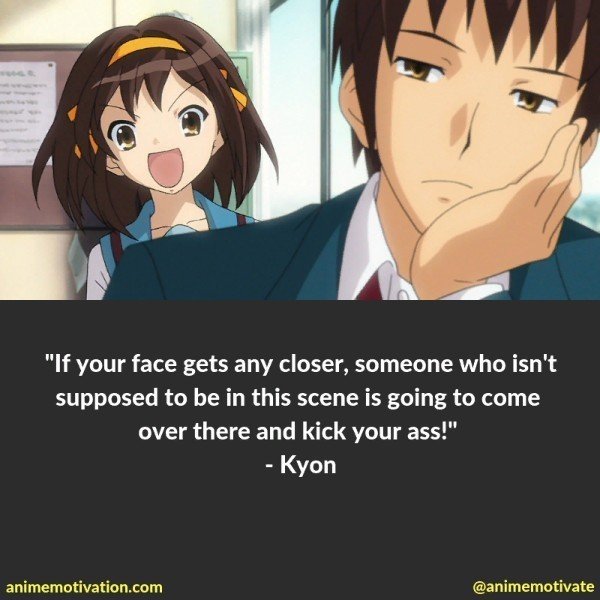 “If your face gets any closer, someone who isn’t supposed to be in this scene is going to come over there and kick your ass!” – Kyon

“The Santa that showed up at my Kindergarten Christmas festival? I knew he was fake. And I never saw Mommy kissing Santa Claus, either. But I have to say, even as a little kid I knew better to believe in some old man who worked only one day a year.” – Kyon

“Applying knowledge is of the utmost importance when studying. You wrestle with various things and come up with a solution from there. It’s true that asking someone who knows the answer is the quickest. But you can’t necessarily say that that’s the best way, don’t you think?” – Asakura Ryouko

“I thought that everyone in Japan had to be packed in there. So I turned to my dad and asked him,”Do you know how many people are here right now”? He said probably fifty thousand, since the stadium was full. I was only one little person in that big crowded stadium filled with people, and there were so many people there, but it was just a handful out of the entire population. Up till then, I always thought that I was, I don’t know, kind of a special person. It was fun to be with my family. I had fun with my classmates. And the school that I was going to, it had just about the most interesting people anywhere. But that night, I realized it wasn’t true. All the stuff we did during class that I thought was so fun and cool, was probably happening just like that in classes in other schools all over Japan. There was nothing special about my school at all.” – Haruhi Suzumiya

“Brush my teeth and go to sleep at night. Wake up and eat breakfast in the morning. People do those everywhere. When I realized that everyone did all these things on a daily basis, everything started to feel so boring.” – Haruhi Suzumiya 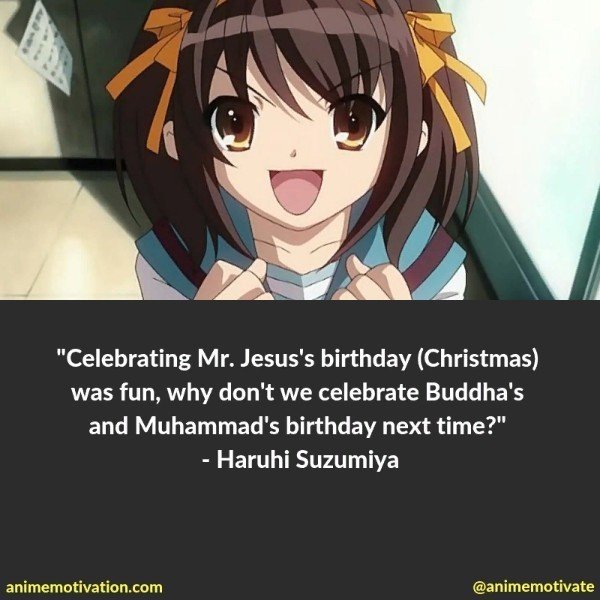 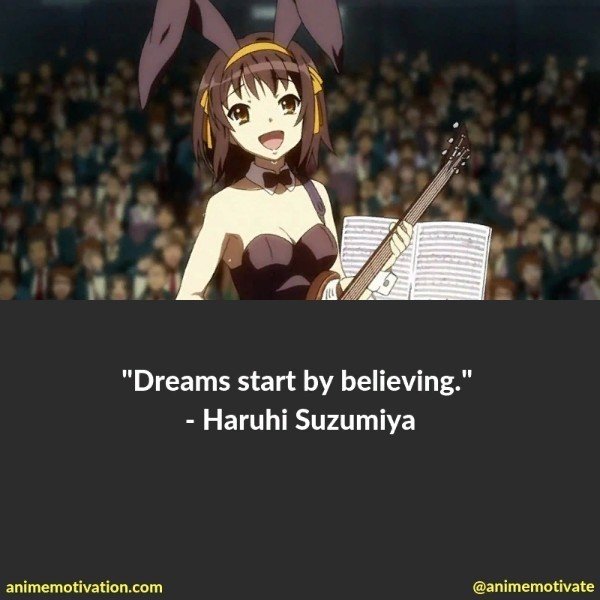 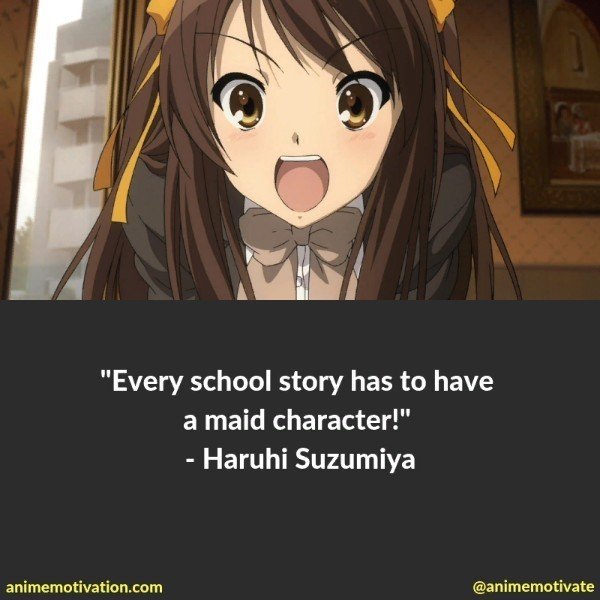 “Every school story has to have a maid character!” – Haruhi Suzumiya

“Kyon. The contest begins the second someone challenges you. Anything the loser says otherwise is merely an excuse.” – Haruhi Suzumiya

“Anyone accepting defeat will be punished by running ten laps around the school, naked! And you’ll have to yell “Green Martians are chasing me!” for the whole ten laps!” – Haruhi Suzumiya 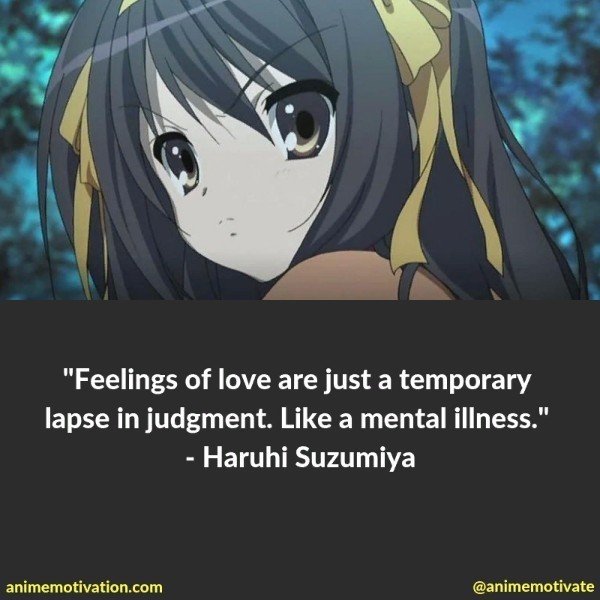 “Feelings of love are just a temporary lapse in judgment. Like a mental illness.” – Haruhi Suzumiya 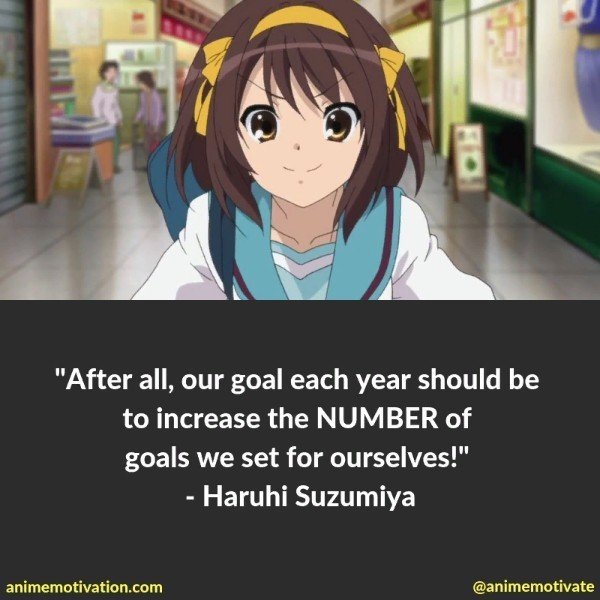 “After all, our goal each year should be to increase the NUMBER of goals we set for ourselves!” – Haruhi Suzumiya

“You know, Kyon…have you ever realized just how insignificant your existence on this planet really is?” – Haruhi Suzumiya

“I’m Haruhi Suzumiya, from East Junior High. First off, I’m not interested in ordinary people. But, if any of you are aliens, time-travelers, or espers, please come see me. That is all!” – Haruhi Suzumiya 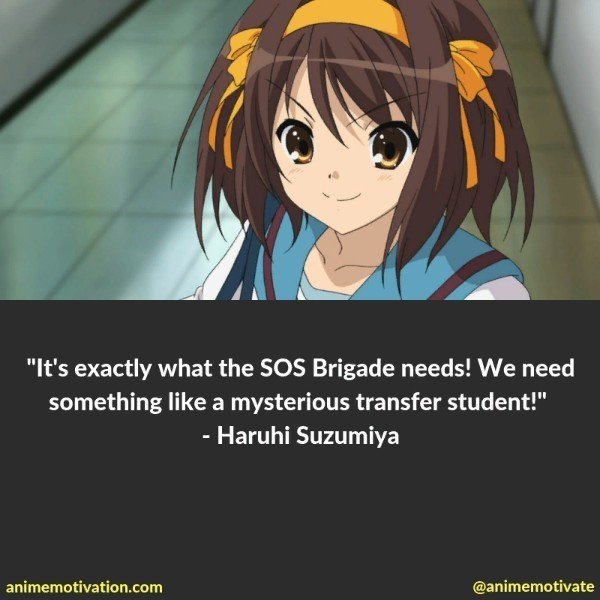 “It’s exactly what the SOS Brigade needs! We need something like a mysterious transfer student!” – Haruhi Suzumiya 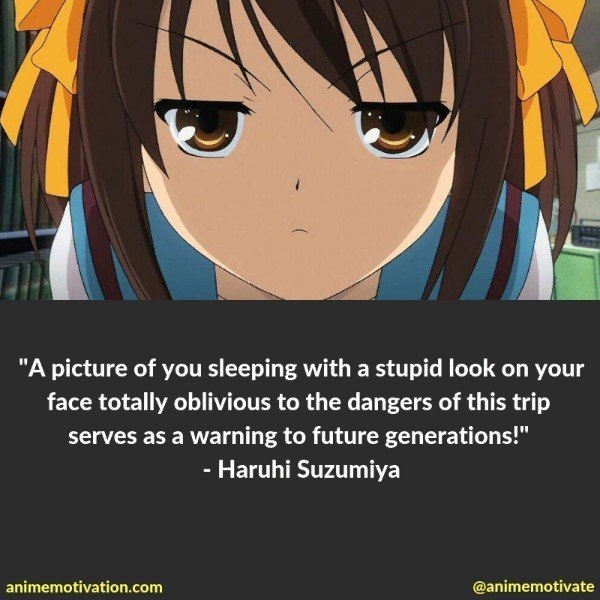 “A picture of you sleeping with a stupid look on your face totally oblivious to the dangers of this trip serves as a warning to future generations!” – Haruhi Suzumiya 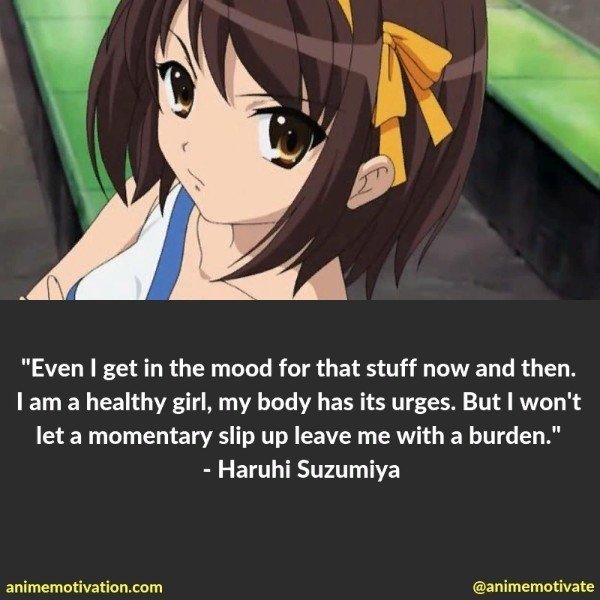 “Even I get in the mood for that stuff now and then. I am a healthy girl, my body has its urges. But I won’t let a momentary slip up leave me with a burden.” – Haruhi Suzumiya 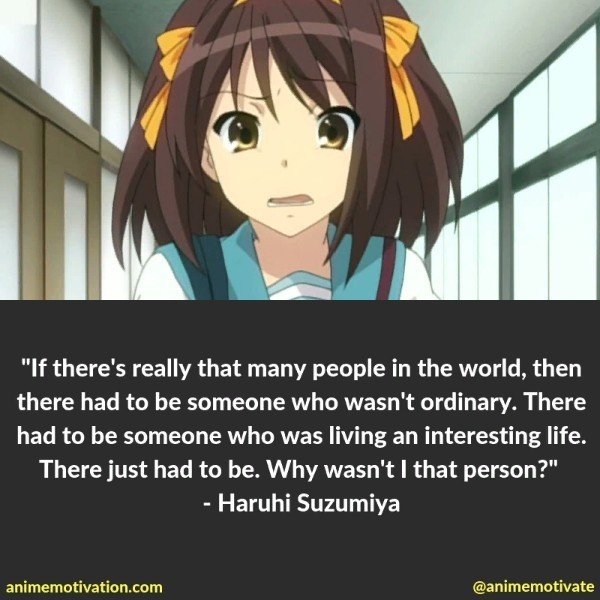 The Most Memorable Quotes From Steins Gate