Being included in the awards was never something I planned on, hoped for, or wanted. There’s no awards I’ve ever wanted a part in.

I don’t do the “hope” thing either.

That’s just the kind of person I am. But then it happened back in 2020, which lead to me being a judge in 2021 for the that made it through.

The journey of becoming a judge

It’s important I give you context, because there’s a bit of irony when it comes to HOW things came about over the years.

I started Motivation in 2016. It’s the trendsetter for quotes online, a thing many have slowly started to copy and emulate over the years.

Back then I reached out to every website on the planet. Big, small, medium, didn’t matter. was one of them.

99% of them never responded (or seen) my emails. Nobody knew who I was.

Jumping forward to 2018 and s parent company elation reached out for a news type of partnership. This is the year Motivation exploded as well.

As our relationship evolved over 2 years (2020) I guess them being familiar with me personally played a role in me being “chosen” at random.

There’s something else I have to mention that I believe influenced the decision beforehand.

Related: Why I Decided To Get Into The Anime Industry

After starting to become more interested in the awards as a business, and seeing the criticism over time, I decided to learn about it properly.

After realizing how it worked, I did an article on it. And yes, I criticized the process and how unfair it was for the FANS vote to mean jack sh*t. Only for the judges vote to have so much power.

This was my main point, and that lead to a phone call (believe it or not) about the article. Asking me about my points and wanting to know more.

While some of my points were brutally honest, I feel like that’s part of the reason I was chosen as a judge literally 1 year later (2020).

You would have thought the opposite would have happened, not many take criticism well (the respectful type of criticism).

It definitely played some role down the line.

Being chosen as a judge

Around November 2020 I got an email about whether I wanted to take part in it or not. It all felt so ironic since it’s the kind of thing I’d joke about, not take seriously.

But that’s how it went down. Nothing fancy about it. But I can only speak for me.

I don’t know how anyone else ended up being part of it.

I also know it was early November 2020 because that’s the same month I started hearing about Jujutsu Kaisen, which was when it aired-ish.

There was barely any episodes but it was set to be the Shonen of the year (ignoring ’s bonkers popularity).

The process of judging for awards 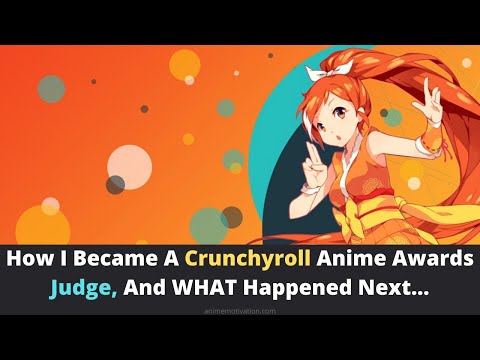 I say that based on what I’ve heard mildly about some of the older ones.

This time around all the judges are given a blank sheet. You can think of it like that. On the blank sheet there are categories.

It’s then our job to include whichever we want within that category. And we had 100 points each to use for either 1 choice, or multiple within a category.

I chose (and characters) from shows like Railgun T, Ascendance Of A Bookworm, and so on.

We all know how those results played out.

Most judges chose mainstream or the kinds of choices fans would “expect” to see, so it didn’t end up influencing too much variety like I thought it would.

Related: 5 Reasons Why I Don’t Recommend Mainstream Anime Too Often

My thoughts on the 2021 awards

The 2021 awards seems to be one of the best there’s ever been. I never followed it from 2016 but since around 2018 I’ve paid a little attention.

2018 is ironically the year that , or I should say, elation reached out to Motivation. That’s how the partnership began.

I still think something needs to be done about the voting process though, because otherwise it’ll never be a TRUE representation of what fans think across the board.

I’m glad my vote for Tsukasa and Nasa (best couple) ended up being a winner in the best couple category. It’s the most justified choice in my eyes.

Best fight was OK (Deku Vs Overhaul) but many were missed from 2020.

Reactions since becoming a judge

As with most things, the more coverage and attention you get, the more HATE is bound to come. That goes for respect as well, but hate is more visible.

I’ve had some of the most racist comments since being featured on ’s platform, and just petty comments on either social media or right here on the website.

I’ve heard a lot of good as well from people but admittedly – not to the degree of negativity, which says something.

And that’s pretty much it.

Would I do it again? Yes. Why not. No skin off my back. But that all depends on where they take it in the future, and what changes end up being made.

is part of and Sony now after all. Who knows how that could influence the awards going forward.

I think it’s great that you were a judge at the awards. The problem with award shows for animation as a whole is that they never have any real fans who know & love the subject as judges. You being one of the judges here was a MAJOR step in the right direction. Bravo!

I definitely hear you though. In fact that’s ONE of the criticisms I pointed out in 2019. Many of the judges were journalists from sites like Daily Star, Daily Mail, Forbes, and other random shit.

They changed that for the 2021 awards it seems.