We are 7 months into 2021 & this year has easily been one of the best years we’ve had for in a long time. Especially when you compare it to the drought of 2020.

We’ve gotten good shows in all kinds of genres this year & of course, this also means the year has been stacked with spectacular action-packed shows.

In this list, we’re going to look at 15 of these awesome fight scenes 2021 has offered.

Vivy: Fluorite Eye’s Song was certainly the dark horse of Spring 2021. The show was co-written by Re:Zero’s author Tappei Nagatsuki & produced by studio WIT but somehow wasn’t able to get the popularity it deserved.

The fight between Vivy & Elizabeth happened in episode 4 & the hand-to-hand combat choreography in this was mind-blowing.

What made it even more impactful was the emotional climax of the arc that happened through this fight. The music helped elevate this fight to the next level.

While Eren vs Warhammer Titan might not be a very complex or technical fight,, the epic-ness of this fight is certain to give even the most cold-hearted viewers goosebumps.

Some of the fans did complain about the CGI used in this fight.

That said, the majority will agree that 3 seconds of bad CGI didn’t ruin the emotional impact of the fight. Or the badass buildup our protagonist Eren got through this fight. 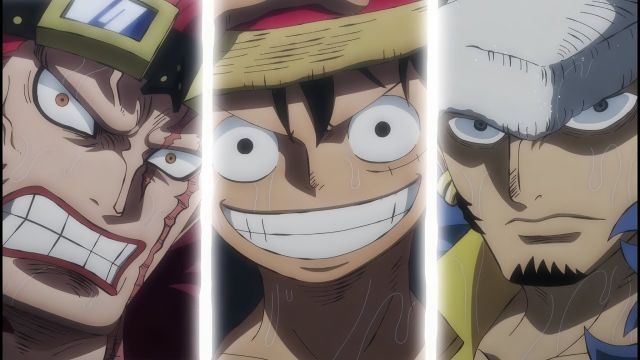 The animation quality of has been on another level since the ongoing Wano arc started 2 years ago.

It seems like Toei animation has plans to elevate the experience even more.

The worst generation trio vs the fodder of beast pirates took just a single panel space in the ut the was able to make it one of the best looking fights.

It’ll be fascinating to see if the manages to keep up this consistent animation quality, or reverts to the old animation after the arc is done.

Tokyo Revengers fight scenes are nowhere near as flashy as the other fights on this list. That said, the hype the show can provide in the gang wars of Japanese delinquent students is mind-blowing.

The fight between these 2 gangs was set up from early on in the show, and when it happened it certainly delivered. 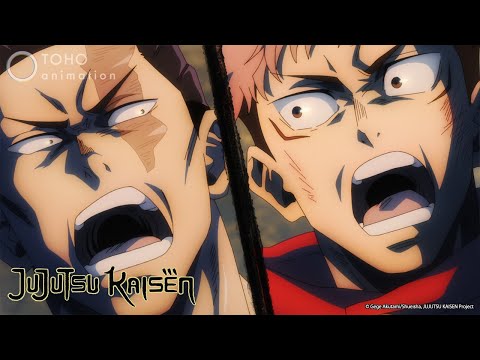 It’s safe to say that Mappa has revolutionized modern by elevating the animation standards. This fight is proof of that.

The show certainly had good animated fights here & there. Mappa also took Itadori and Todo vs Hanami to the next level.

The blending of 2D & 3D animation in the fight was perfect and it was a treat to the eyes. 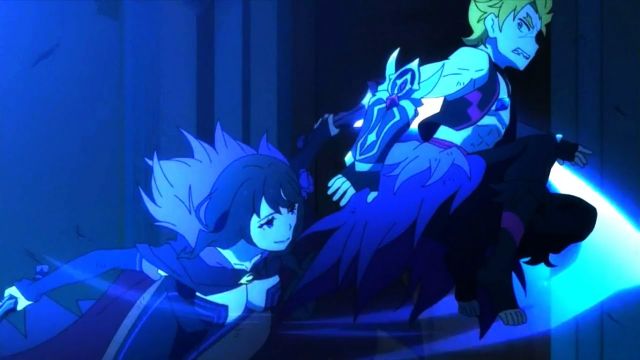 Elsa vs Garfiel is the definition of a ‘raw’ fight. The fight was brutal and sometimes hard to watch, so the fight is not for everyone.

That said, the reason this fight is on this list is not because of its brutality. It’s because of how the character arcs of Elsa and Garfiel got a satisfactory conclusion through this fight.

The episodes preceding this fight were heavily focused on Garfiel’s character, hence this fight was really impactful.

While Wonder Egg Priority’s conclusion might not have lived up to the expectations of most fans, we can’t forget the high production fights it provided throughout the series.

Episode 6 was no different. It provided us with one of the best fight scenes in the

Ai had to fight with an invincible enemy and the quality of this fight, from its animation to music was all beyond incredible. 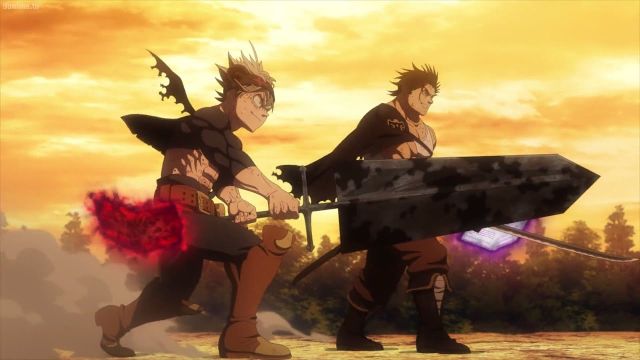 Black Clover’s went into hiatus this year due to unstated reasons but it went out with a bang.

Yami & Asta vs Dante was incredible from a storytelling point of view. It provided amazing character interactions between two of the show’s most important characters Yami & Asta.

The elevated this fight even more with some of the best production value we’ve seen throughout the show’s runtime.

Throughout the show, we viewers always felt we weren’t being shown Megumi’s full potential.

Every character was getting good moments throughout the show but Megumi didn’t get much relevance even though he is one of the main characters.

In this fight though, we found out that Megumi being held back as a character was all part of his character arc.

We got to know his character flaws through a flashback in this fight and at the end of it, he overcame that flaw. Then provided us with one of the hypest moments of the show. 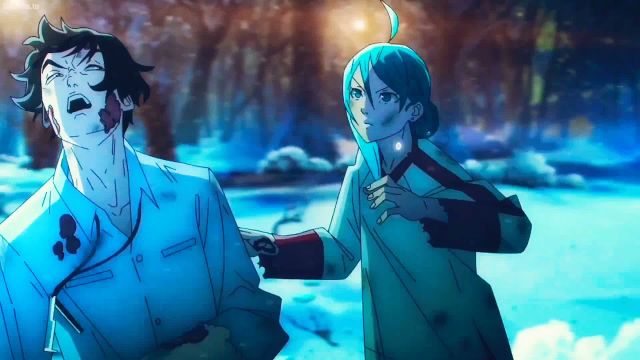 Vivy vs Yugo Kakitani yet again proved that Vivy: Fluorite Eye’s Song has some of the best hand-to-hand combat fights we’ve seen in recent years.

The fight managed to one-up Vivy vs Elizabeth, with its jaw-dropping slow-motion scenes and fluid animation.

Attack on Titan fights are always emotion-heavy and this was no different.

Levi was put against his men who were turned into titans by his mortal enemy Zeke aka Beast Titan.

This kind of stuff is enough to put people in emotional trauma. It felt like Levi had given up too, but he is Levi Ackerman after all.

He managed to kill all of his men who turned into titans and also took down Zeke.

12. Fushi vs Oniguma (To Your Eternity)

Similar to Attack on Titan, the fights in To Your Eternity are also stacked with emotions. The difference here though, is the fights don’t really have the hype factor.

Instead, it pays more importance to the emotional factor.

Fushi vs Oniguma is the perfect example for it. While the animation of the fight was indeed top-notch, it didn’t hugely impact the fight.

The fight was about developing Fushi as a character after all, and showing the brutality of the human world in a unique fashion.

13. and Sasuke vs Jigen (Boruto: Next Generations)

and Sasuke vs Jigen proved the franchise will always be the king of hand-to-hand combats.

Boruto as a show might not be as well-received as its predecessor, but this fight still managed to break the internet proving that the legacy of is phenomenal.

The fight had everything people love about a classic fight: 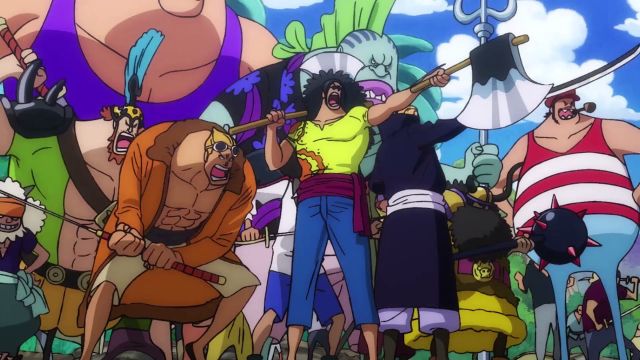 The clash between Roger and Whitebeard was one of the most highly anticipated moments fans wanted to see in the .

Their clash alone would’ve made this list but the even treated the fans with a fight between the crew members of Roger and Whitebeard.

It featured moments like Rayleigh stopping Marco with one figure, Buggy’s comedic scenes and other good moments. 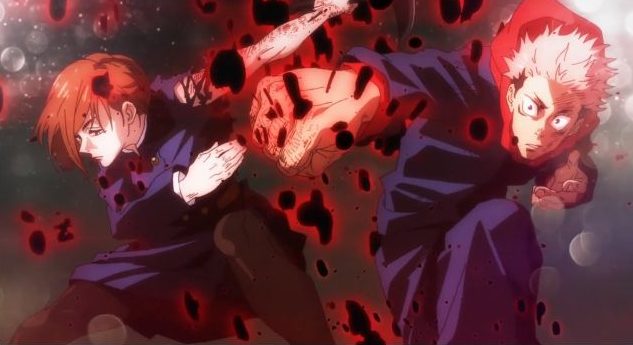 This fight truly proved that Jujutsu Kaisen stands out from other shounen series when it comes to the respect the show gives to its female cast.

This team battle was fast-paced, it felt like Eso & Kechizu would become recurring villains, but our main characters didn’t allow them to escape and demolished them.

This was a perfect fight for the last episode of the first season of Jujutsu Kaisen.