This is set in a medieval time frame where the church has really started to gain power and influence over the world.

Our main characters, Lawrence the trader and Holo the furry, have to deal with the fact that the existence of furrys is heresy…

Holo is a pagan god and must be killed for being a demon in the eyes of the church, basically.

Starting the story in a small town, the trader Lawrence stops in to sell his wares and take part in the festivities.

By chance of fate on the night he meets with Holo the wise wolf, a local pagan god said to be responsible for the harvests of the local land.

He chooses the furry path, damming himself to death if the church were to find out.

After some shenanigans in the local town, and seeing history that parallels real life, the two set off on a journey that takes them though many town’s, cities and villages.

Each of them is a mini arc where the viewer gets to see drama that can range from dealing with currency and its purity to a crash in the stock market and much more.

Not to mention all the character development that takes place that will tug on your heart strings.

There is a lot to love if you want to read or watch the series.

The church is a overarching presence within the entire series that messes with the affairs of not just the main characters, but the very world of affecting the culture, laws and trust between people.

For example – men and women together without the bond of marriage is seen as taboo and causes strife for the duo in their day to day life because of it.

The church is one of the most prevailing figures of power within the whole series. It shows how it screws over the common man with miss aligned scales guarantee that the church always got more than what they deserved.

It’s a good way to both demonstrate the corruption of power but also allows the heroes to one up the church.

It’s an insightful scene to say the least alone with great inspiration for any writers out there.

The weather for most people is just a day to day part of life, but for a traveling salesperson this can be the difference between life and death.

In a world where most of the roads are dirt and there is no calling for assistance if you were to get in trouble, the author shows the dangers of living in a pre modern age.

Personally as someone who has been in the scouts so had to go on many long camping trips, I can attest to the power of weather if you time things wrong.

Some fun memories there.

Related: 16+ Anime Characters Who Are Entrepreneurs Or Business Minded

Major spoilers for end of season 1 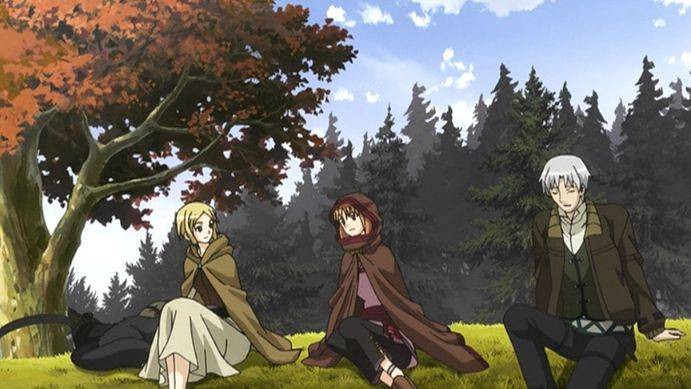 In the last arc of spice and wolf lawrence and holo form a deal with a trading company, using their knowledge to be able to make more money.

During this arc we really get to experience betrayal, wrath and revenge.

By the last episode we get to see great social manipulation by both protagonists and antagonists.

Through out the series, Holo and Kawrence aren’t above lying to make more money. They’re dealing with unethical people after all.

We see this in almost every episode but they would never get someone killed (you will see what I mean if you give it a go). 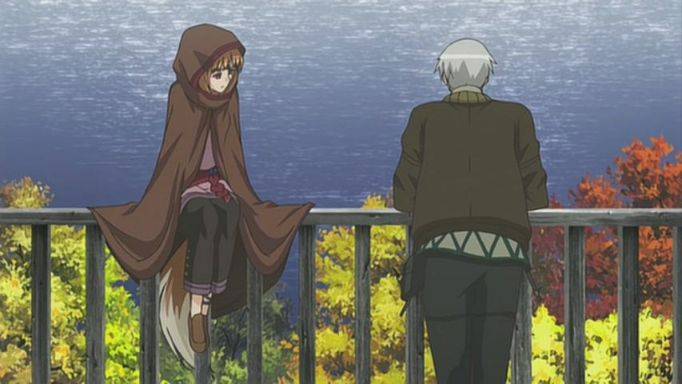 In terms of philosophy the ending of season one is a kind mixture of the idea of men vs beast/nature.

Humanity always thinks that it will rise above nature through technology, trickery and brute force. And we get to see the wrath of nature and the cost of betrayal, resulting in a lot of deaths.

The fact remains that holo wanted revenge for the backstabbing and underhanded tactics of the opposition.

Lawrence allows them to live under conditions that if broken will lead you to a life on the street’s.

Relevant: The Best Anime About Business, Management, Or Similar Themes

The greatest parts of the show in my opinion is the character development, interactions and the random events that take place that feel realistic.

Even though half the time they are not groundbreaking, the author has the ability to keep my attention for hours on end.

The openings that are almost like art representing the world’s higher level messages and themes.

Some of those themes being:

And others I will not say.

These concepts and themes set the world and gives the viewer so much to think about while watching.

Some of these questions would be good enough to make several good but together, it forms an interesting world that I don’t think has a good comparison,.

It’s almost completely unique, so if you are wanting to watch the , read the / where all this and a lot more happens.

I can happily recommend spice and wolf. And this is coming from someone who really enjoys shonen and seinen ().

Jonathon Crockett is one of the writers of False Heroes, a dystopian odyssey begins and is a massive anime, manga and general nerd. Loves dnd, fantasy, sci-fi along with almost anything darker in tone. Mainly enjoys shounen and seinen. Though is up for any thing with a compelling plot.