Red is the colour of passion, love, hatred, danger. As well as determination, strength, desire and power.

And as far as girls go, their red hair colour gives off an intense feel.

They’re often , and are one of the strongest when it comes to hardships and inner-strength.

Sometimes they’re easily annoyed, but their passion and desire draws you in like two magnets.

And that’s what makes them stand out from the crowd of girl types.

Here are 19 red haired girls with some of the best personalities. 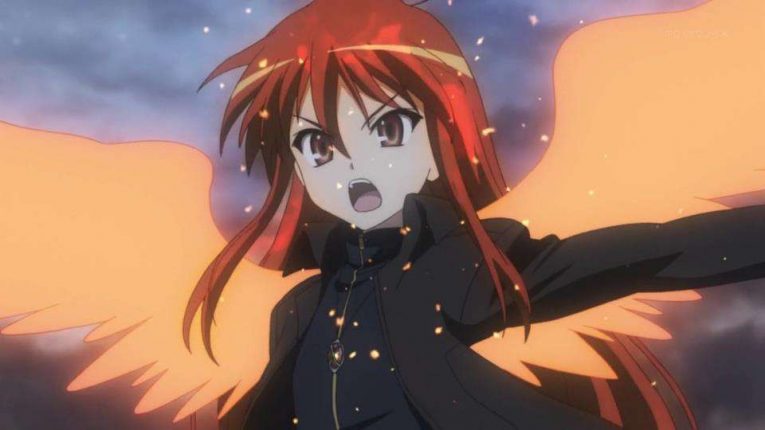 Shana, known as the flaming haired blazing eyed hunter from . An action/fantasy series with similarities to shows like D.Gray Man.

Shana has an intense personality.

On the outside it can seem as if she doesn’t have any empathy. At least in the beginning. But those who get close to her know this isn’t the case. Like Yuji Sakai.

Shana’s fiery determination, work ethic and commitment are some of her best traits.

It’s a part of what makes her personality shine. 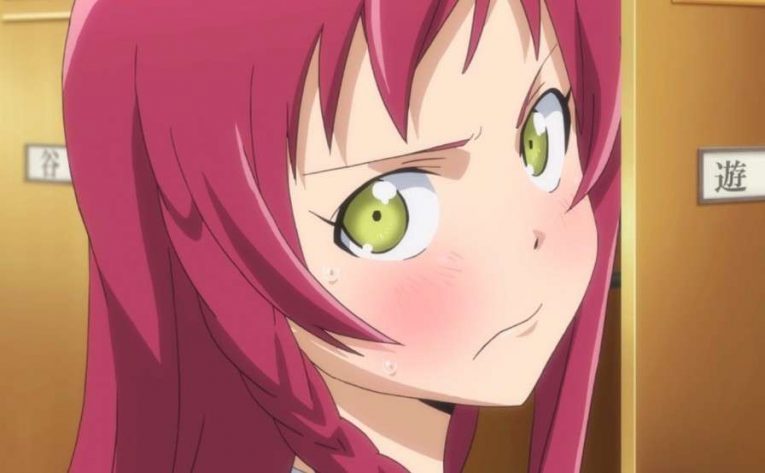 Taken from the comedy series – The Devil Is A Part-Timer.

Emi Yusa’s real name is Hero Emelia. And just like a hero, she has a strong sense of justice.

She’s committed to doing whatever it takes to do what’s right and accomplish her goals.

And with limitless amounts of determination like Shana, it’s one of her most attractive traits. 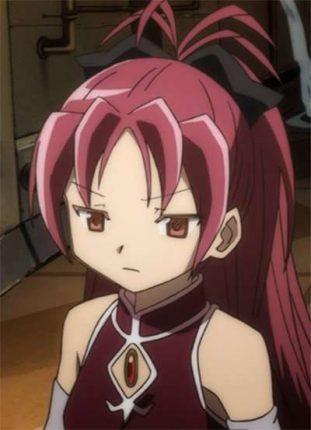 Kyoko is one the main magical girls from Puella Magi .

Unlike the other magical girls, Kyoko looks at the world from a straightforward point of view.

Kyoko’s brutally honest, doesn’t hold back and lets nothing stand in the way of her goals.

One of her best traits is her strong independence and how responsible she is. 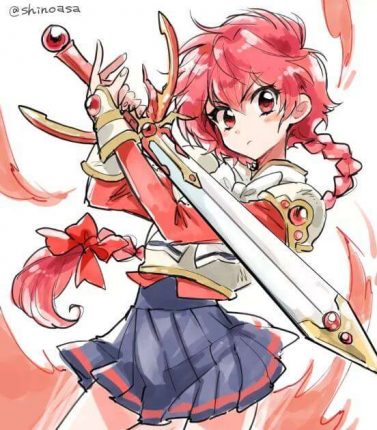 One of the three magic knights from fantasy show: Magic Knight Rayearth

Hikaru Shidou is an action-taker. If you ever need help she’s the type of person you can depend on.

Rather than thinking too hard about a situation, Hikaru will jump in and figure it out while doing it.

She’s empathetic and caring towards not only those around her, but even strangers. 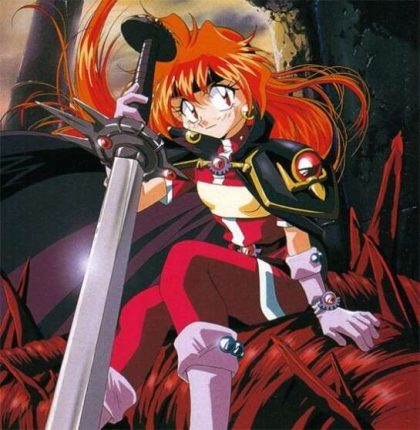 A sorceress from the old-school fantasy show: .

Lina Inverse is overbearing, bossy, intense and quite a handful. At least for the average person.

Beyond that, she’s an action-taker and will do whatever it takes to come out on top.

Lina’s best personality trait is her dedication and independence. And she’s fun to be around. 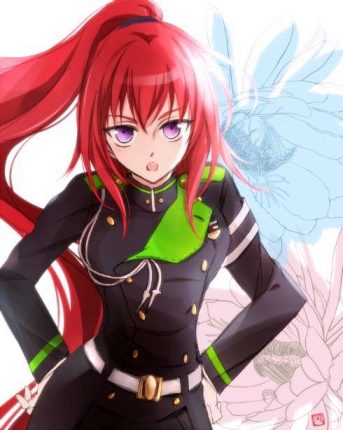 Mito Jujo is a character from – Owari No Seraph.

She’s loyal, , strong, determined, and believes in following the rules.

And has enough confidence to praise others without it hurting her own ego.

It’s these traits as well as others (like being straightforward) that makes Mito an interesting character.

Related: 100+ Of The Best Owari No Seraph Quotes That Are Timeless 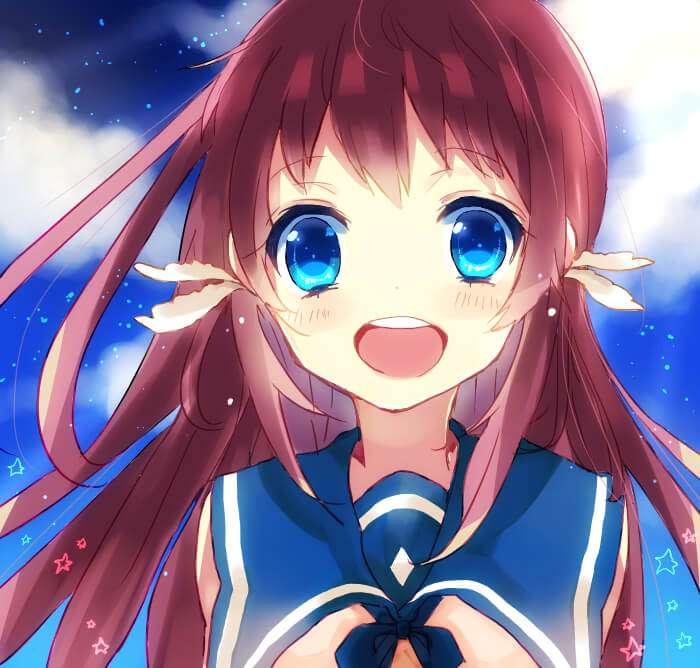 Manaka is taken from the series: Nagi no Asukara. She’s a little different to most characters mentioned on this list.

Manaka is caring and wants the best from others.

She’s not the type to get angry easily, though Manaka is quite an emotional character. 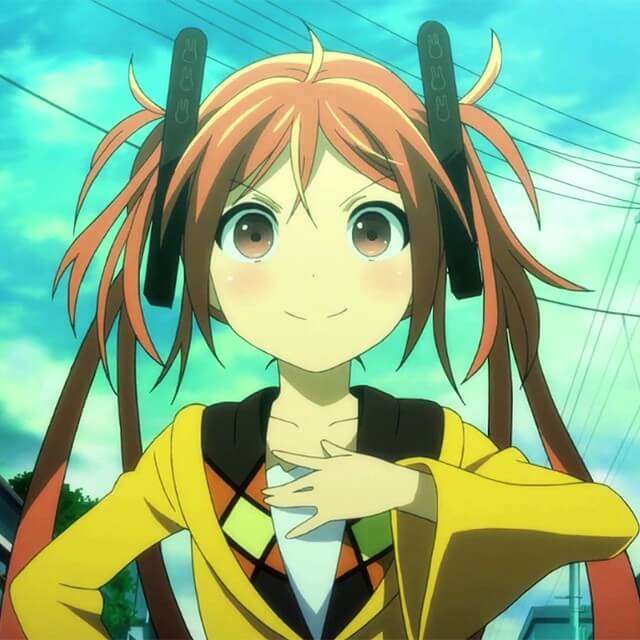 A main character from the action – Black Bullet.

Enju Aihara is a sweet young girl with a fun and playful personality.

She’s tough on the outside and even fearless when it comes to fighting. But on the inside she’s a little girl in a messed up world who hates her kind.

And yet despite the pain she keeps on smiling. No matter how bad the situation is. 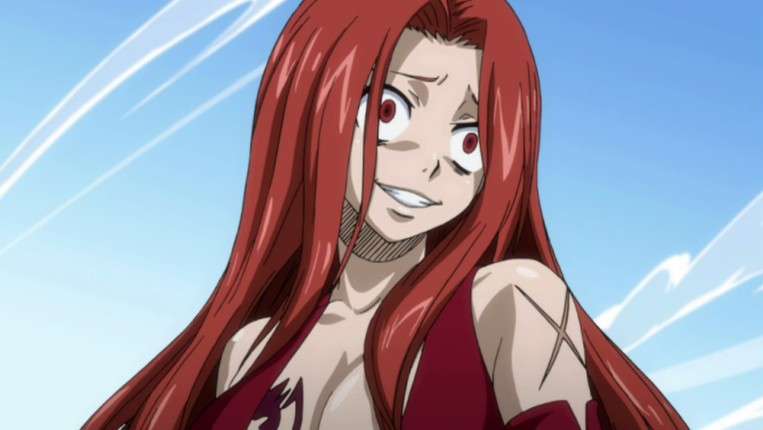 An evil character taken from the series – .

Flare at first is cruel, wicked, sadistic and driven by hatred. But after changing her lifestyle her true nature starts to show.

You realize she’s genuinely kind, shy, protective and is probably an at heart. 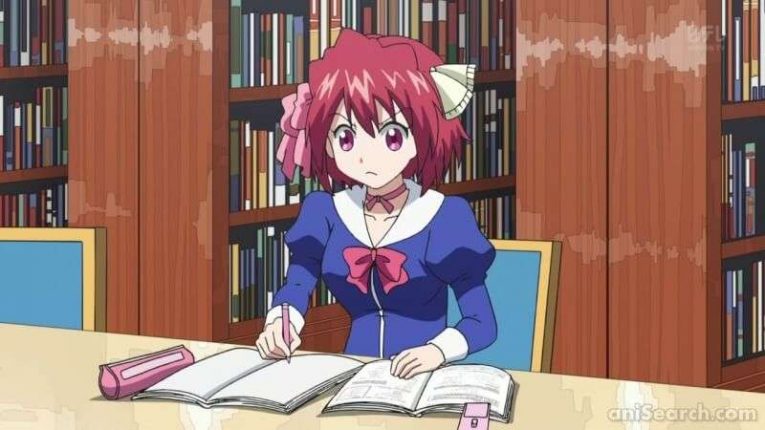 Kanan Chinami is one the characters seen in The Ultimate Otaku Teacher (Denpa Kyoushi).

She’s shy, secretive and even ashamed of her own voice in the beginning. Because her voice sounds and similar to that of an character.

But overtime she develops self confidence to use her unique voice. And starts to make friends with some of her classmates by breaking out of her shell. 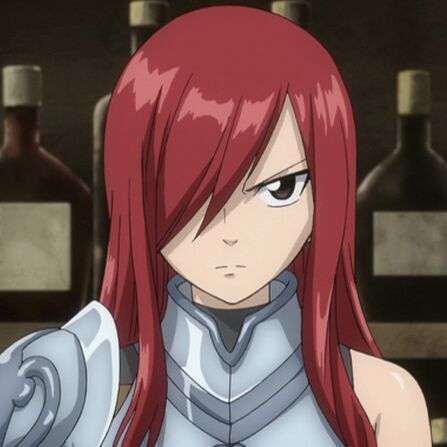 “All I need is the power to be able to protect my comrades. So long as I can have the strength to do that, I don’t care if I’m weaker than everyone in the world.” – Scarlet

is one of the main characters from mega popular series: .

Like Lina Inverse, is bossy, , determined and has a feisty personality.

Erza is a natural leader and has no problem taking command of the situation if needed.

As a child was tortured and kept as a child-slave.

It’s this childhood that makes such a character with a surprising amount of inner-strength, and an inspirational character. 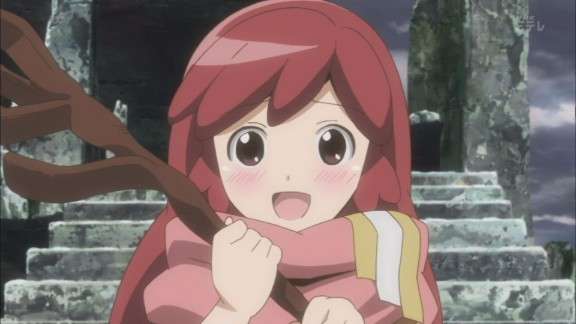 Serara is one of the characters from : Log Horizon.

She’s one of the cutest characters on this list. With a heart so pure it would sparkle if you could see it.

One of her favorite hobbies is cooking, which she’s passionate about.

Serara’s strong traits are being empathetic towards others and her caring personality.

Related: 27 Log Horizon Quotes From Some Of Your Favorite Characters 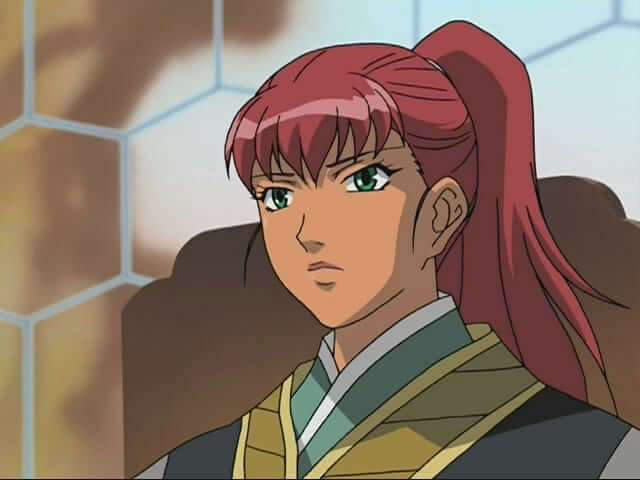 Youko is the main girl from The Twelve Kingdoms.

In the beginning she’s physically weak, confused and a frightened young girl.

Who then grows into a strong warrior. Developing a strong mindset and a calm personality.

Youko’s strongest trait is her ability to put others before herself.

Though her weakest trait is she’s easily influenced by public opinion. And can sometimes break under too much pressure. 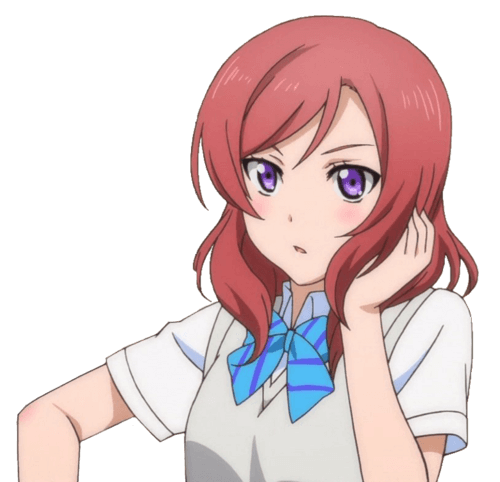 Maki is quiet and introverted. Born to a wealthy family.

She’s passionate about (especially the piano) and has a soft side for her friends. Even though she goes out of her way to pretend she’s cold, or to act tougher than she really is.

All-in-all, Maki has one of the most attractive personalities as far as red haired girls. 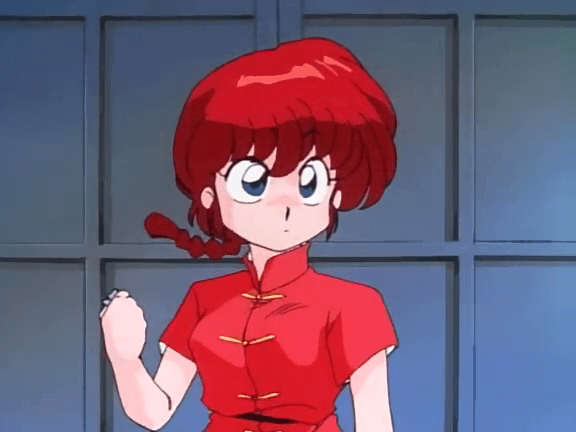 Ranma has a split gender after being cursed in the beginning of the Ranma 1/2 series.

In his female form (above) Ranma is sarcastic, patronizing, cunning and devious.

And has a feisty personality most of the time while in his female form.

Whenever Ranma gets the chance in his female form, he enjoys teasing Akane Tendo. A girl he secretly likes. 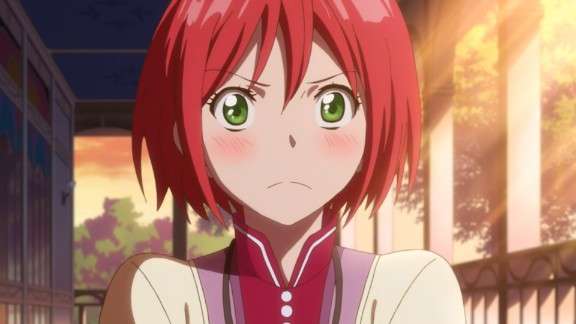 Taken from the series – Snow White With The Red Hair.

Shirayuki has a fun and outgoing personality. Making it easy for her to approach strangers.

She see’s the best in others, is hard-working and goes out of her way to make an extra effort.

People usually underestimate Shirayuki, only to be surprised by how strong-spirited she is. And even independent and responsible. 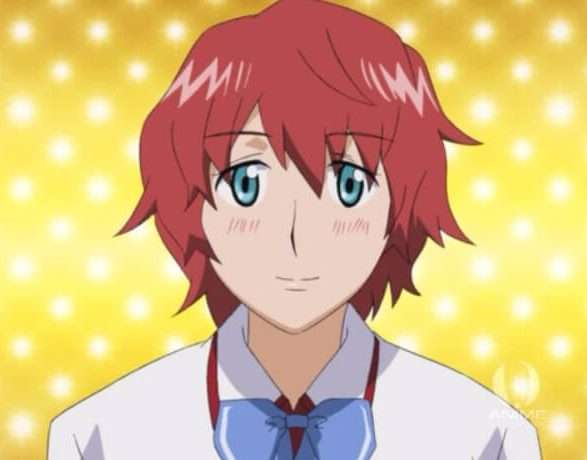 Cyndi is taken from the slice of life : Best Student Council.

One of Cyndi’s biggest traits is she has a big heart and tends to smile a lot. Even though at the same time she’s the type to cry easily. 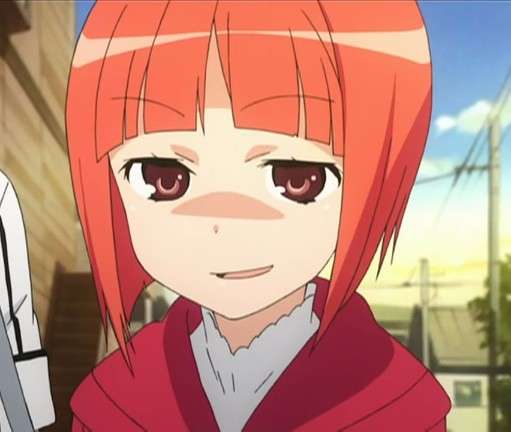 Ringo Akai is featured in the : Okami-San and her seven companions.

She’s devious, cunning, hard to figure out and outgoing.

Her goal is to always have fun which she does by shaking things up to make it interesting. Even if she can be a little over the top sometimes.

Relevant: 24 Of The Smallest Anime Characters 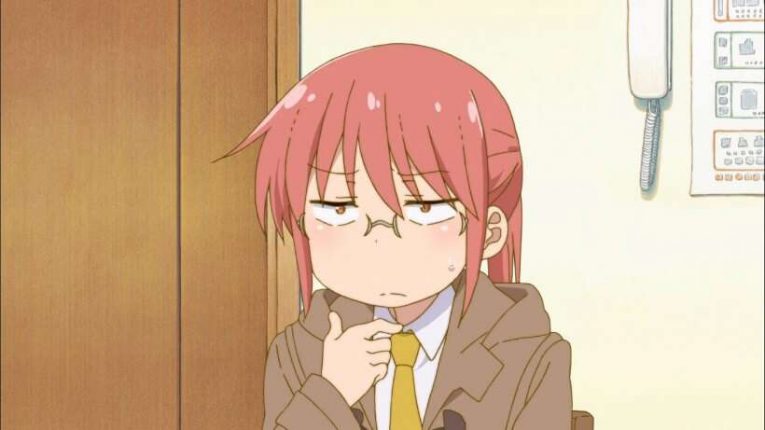 She’s a hard working woman with a small circle of friends, Is introverted by nature, and has a cool-calm-collected personality.

She’s not the most energetic character on this list, but she’s witty and more laid back than most red haired girls.

And there you have it.

19 Red haired girls from all kinds of shows, Both old and new.

34 Of The Most Interesting Blue Haired Anime Girls