Sunghoo Park is the South Korean director of . An that’s doing more than just exceeding expectations.

As part of Motivation’s partnership with , we have a Q & A with the director where he answered 20 questions.

Here’s a list of all of his answers in this Q & A session!

1. What do you think makes a great comic series to turn into ?

It’s the first time for me to create an based on a Korean comic, which is my home country, so I’m very excited about it.

2. Do you think it has mainstream appeal (i.e. beyond fans) and if so, why?

The theme of the original story is universal. A boy’s growth, friendship, and kizuna (bonds). I think the important things are easy to obtain sympathy and to transmit.

3. This is your second time directing with studio MAPPA since Garo -Vanishing Line- in 2017. Can you talk a bit about what you’ve been up to before signing on to direct ?

After “Garo,” I worked on the opening [sequence] of “Zombieland Saga.” After that, while I worked on “Banana Fish” as an assistant director, I steadily prepared for “THE GOD OF HIGH SCHOOL” with script meetings and storyboarding.

4. You have a mixed team with Japanese, Korean, American staff etc. Do you think this gives the show international appeal? And how does each nationality shape/add to the show?

Each country has a different cultural background — is Korean based, but it was not intended to hire a Korean director.

I however came on board as a Korean, and I believe this worked well for us to understand the original work better. 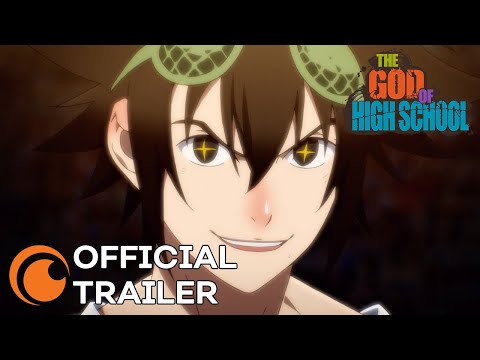 In terms for promotion, the trailer is made for the U.S. The title is dubbed in Korean.

I think these [localization] made a lot of sense for global expansion.

In terms of the charm of this title, the created by MAPPA, which is known worldwide for their high quality works, does not disappoint many fans.

5. Do you have a favourite character in God of High School or is there one particular character whose qualities you particularly admire?

If you asked me to name one, it would be Jegal.

I believe the title will add more depth whether I can portray the antagonist in an (engaging/attractive) way.

To do so, I tried to make myself like the antagonist, Jegal. Not just accusing him of being bad, I tried to explain well in the script why he became who he is in the story.

The actors’ voice performance made me love him even more.

Kenjiro Tsuda is the one who plays Jegal in Japanese, so if you could watch the show in Japanese original sound, you will be able to see the attractiveness of the character.

6. You have an illustrious career as an animator, how different is it stepping into director’s shoes and do you think your experience as a chief animator helps?

An animator does everything from the layout, and we are also an actor and a cameraman.

In terms of overseeing a single scene, it was a position that allowed me to experience all aspects of the work including the art and the setting, as we would say in live action.

After I became a director, I think my experience as an animator has served me well in the sense that I can oversee the work as a whole from such perspectives.

7. What are the challenges in choreographing martial arts for ?

In a nutshell, this means that we have to draw a lot.

I would love it if you could pay attention to it.

8. Do you work closely with fight experts? And how does the process work?

I did not work with a martial arts expert. My teachers are books and YouTube.

9. Is there any fighting discipline that is particularly difficult to animate?

In this title, Taekkyeon was just difficult to draw. The bizarre attacks from the unique steps, which are even different from Taekwondo.

We had a live-action director join us and asked the action actors to recreate it.

Even so, it was so difficult that I thought we could have done better. I think it’s difficult to draw even more popular martial arts, such as judo.

10. Do you have any personal experience with martial arts?

Unfortunately, I didn’t have any experience in martial arts myself, so I learned it in books and on YouTube.

I took care to share the images I had with my team by attaching YouTube links as a reference in addition to what is instructed in the storyboard.

In my team, the producer Kubo-san, who has worked with me since the first episode of “Garo,” was the only one who is a certified karate, judo and kendo player.

I heard that Hidetaka Tenjin, who played Ryohu, is a Taekwondo teacher.

12. If so, what were your favourite shows?

When I was a kid, my favourite was “Dragon Warrior.” It was a very popular title in Korea.

In fact, it was one of the reasons why I later chose to join Studio Comet.

13. How did you get into the industry?

I was shocked by watching “Macross: Do You Remember Love,” I moved to Japan and entered Chiyoda Institute of Technology and Art.

After I graduated, I joined Studio Comet.

14. What is the most important piece of advice you were given when you started out?

When I was in charge of original drawing, my mentor told me, “Think of an animator as an actor.” In general perception, people may think that only the voice actors play the roles as an actor.

But prior to that, an animator plays the part as a primary actor thus we should put their emotions on the character and act to make the character play.

I was very impressed, and this teaching has always been a fundamental part of who I am today.

15. What films/TV shows/actors inspire you?

There are so many , but “The Dark Knight” is the one that comes to my mind when you say “the best.”

There are so many that I like, such as the Marvel works, but it is “The Dark Knight” in the sense that it is stimulating and educational.

As to the actors, I’d say Song Gang-ho. Recently, he played the lead role in “Parasite.”

16. Can you explain a bit about what makes those films/TV shows/actors so inspirational for you?

The movie “The Dark Knight,” simply “changed the way we present our heroes.”

It was indeed a great film until the end. I’m sure many of you know this film very well, but if you don’t know about it, I encourage you to watch it.

As to Song Gang-ho, my favorite actors, it is all about his ability to act naturally that transcends “playing a role.”

He doesn’t take any role with him as a character in tone, but assimilates it into existence.

Whatever the roles he serves, he is so smooth and there is nothing unnatural.

17. How do you feel about the fact that is becoming more mainstream and is watched all over the world thanks to platforms like ?

As a creator, I want as many people to watch and get to know the title, so it’s not anything other than desirable.

18. When people you don’t know find out about your job, what is the one question they are most likely to ask?

They ask how I got into this industry (laughs).

Decisively, a “traveller.” I travel around the world and write blogs to share the (attractiveness/charm/great things) of my travels.

In that sense, I might be lumped into the category of a blogger, but for me, it will be a “traveller.”

20. Any final comments to fans as they enjoy ?

We spend a lot of time planning and preparing this title. Even if you don’t know the original work, even if you are not interested in it, I’d like you to try the show at least once.

If you get a chance to watch the show in Japanese, please do so.

The voice actors are perfectly fit.