Renji Abarai is a luitenant Soul Reaper under Byakuya Kuchiki himself. And always strives to become stronger than Byakuya.

He’s the type of guy who’s standoff-ish, introverted, doesn’t let too many people in, and keeps his distance unless you’re close with him.

If there’s one thing about Renji, it’s his standards and strong morals. Not to mention his tough past. He’s hard on himself.

That’s what makes his quotes shine and reflect his personality + his moments in Bleach. 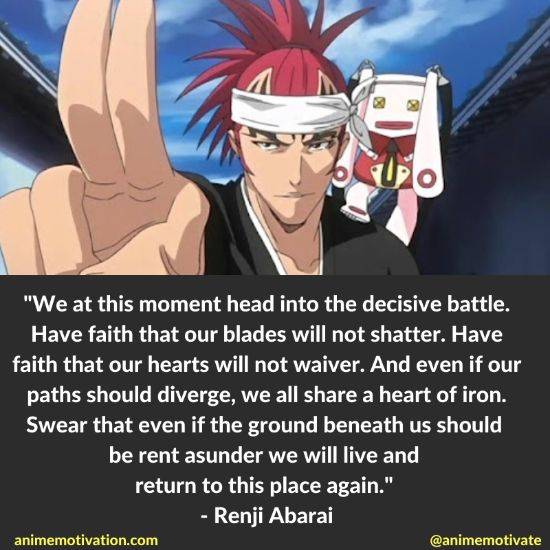 “We at this moment head into the decisive battle. Have faith that our blades will not shatter. Have faith that our hearts will not waiver. And even if our paths should diverge, we all share a heart of iron. Swear that even if the ground beneath us should be rent asunder we will live and return to this place again.” – Renji Abarai 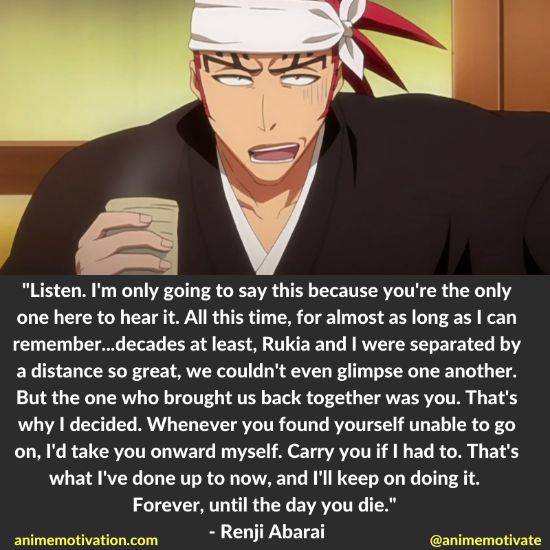 “Listen. I’m only going to say this because you’re the only one here to hear it. All this time, for almost as long as I can remember…decades at least, Rukia and I were separated by a distance so great, we couldn’t even glimpse one another. But the one who brought us back together was you. That’s why I decided. Whenever you found yourself unable to go on, I’d take you onward myself. Carry you if I had to. That’s what I’ve done up to now, and I’ll keep on doing it. Forever, until the day you die.” – Renji Abarai 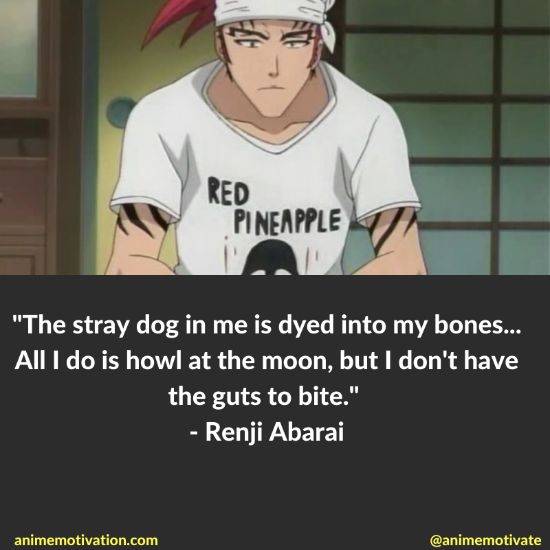 “The stray dog in me is dyed into my bones… All I do is howl at the moon, but I don’t have the guts to bite…” – Renji Abarai 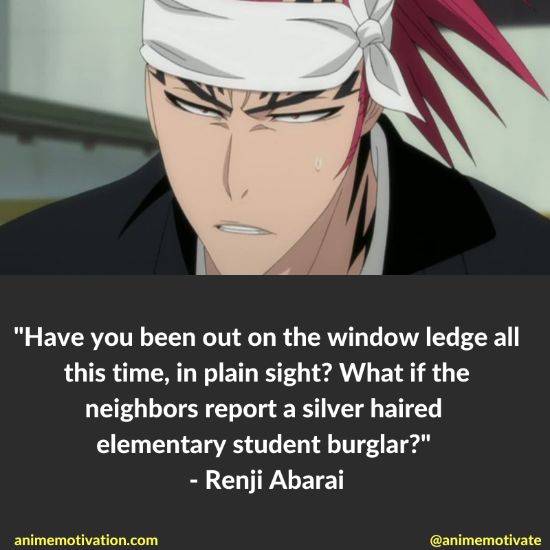 “Have you been out on the window ledge all this time, in plain sight? What if the neighbors report a silver haired elementary student burglar?” – Renji Abarai 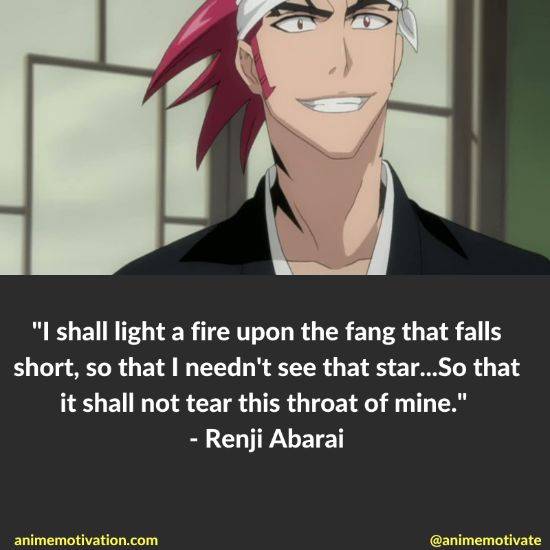 “I shall light a fire upon the fang that falls short, so that I needn’t see that star…So that it shall not tear this throat of mine.” – Renji Abarai 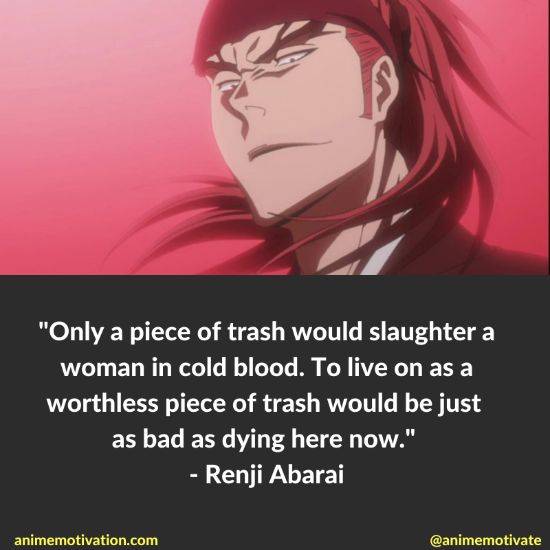 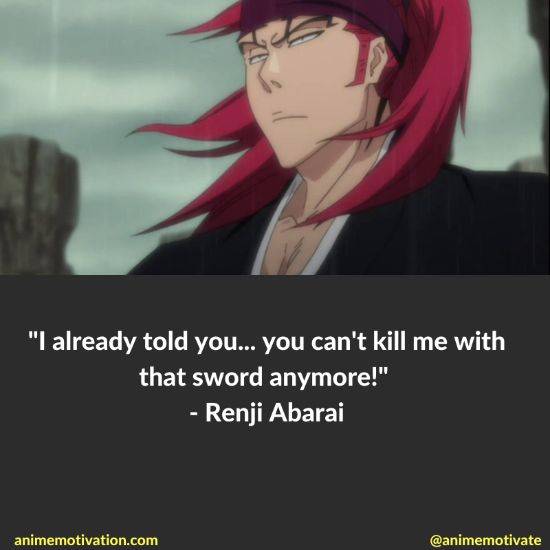 “I already told you…you can’t kill me with that sword anymore!” – Renji Abarai 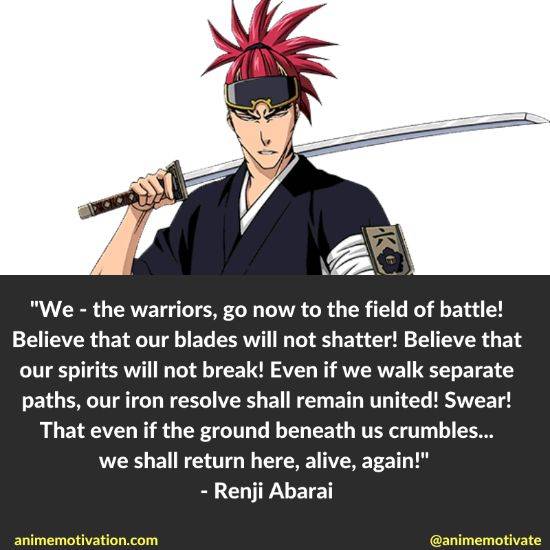 “We – the warriors, go now to the field of battle! Believe that our blades will not shatter! Believe that our spirits will not break! Even if we walk separate paths, our iron resolve shall remain united! Swear! That even if the ground beneath us crumbles…we shall return here, alive, again!” – Renji Abarai 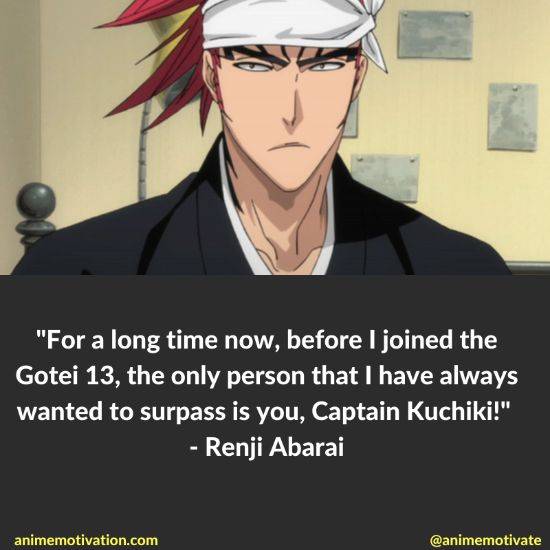 “For a long time now, before I joined the Gotei 13, the only person that I have always wanted to surpass is you, Captain Kuchiki!” – Renji Abarai 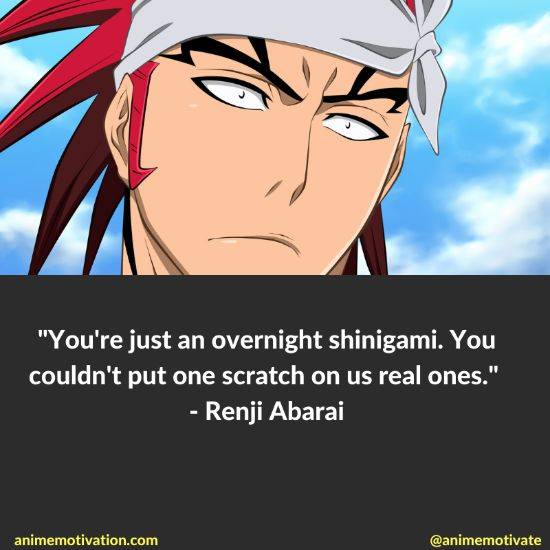 “You’re just an overnight shinigami. You couldn’t put one scratch on us real ones.” – Renji Abarai 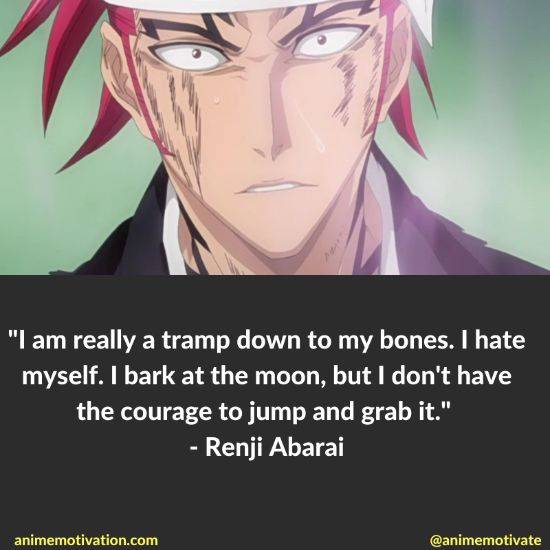 “I am really a tramp down to my bones. I hate myself. I bark at the moon, but I don’t have the courage to jump and grab it.” – Renji Abarai 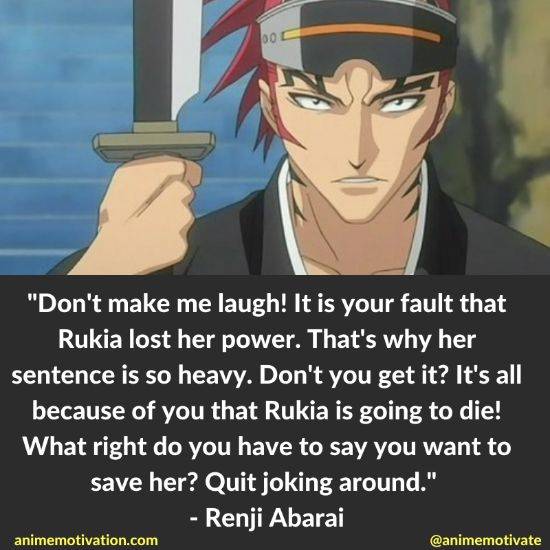 “Don’t make me laugh! It is your fault that Rukia lost her power. That’s why her sentence is so heavy. Don’t you get it? It’s all because of you that Rukia is going to die! What right do you have to say you want to save her? Quit joking around.” – Renji Abarai 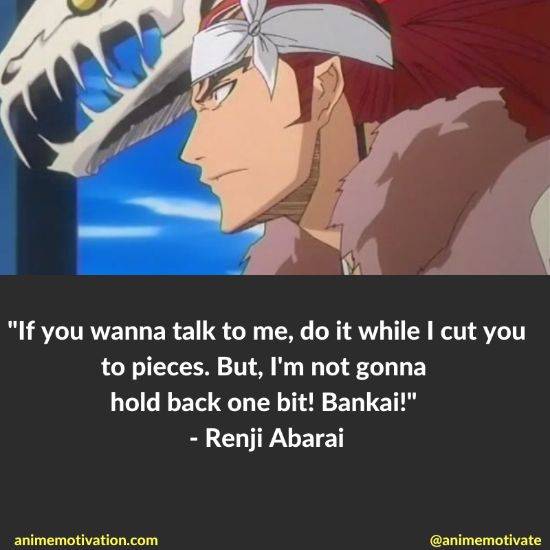 “If you wanna talk to me, do it while I cut you to pieces. But, I’m not gonna hold back one bit! Bankai!” – Renji Abarai 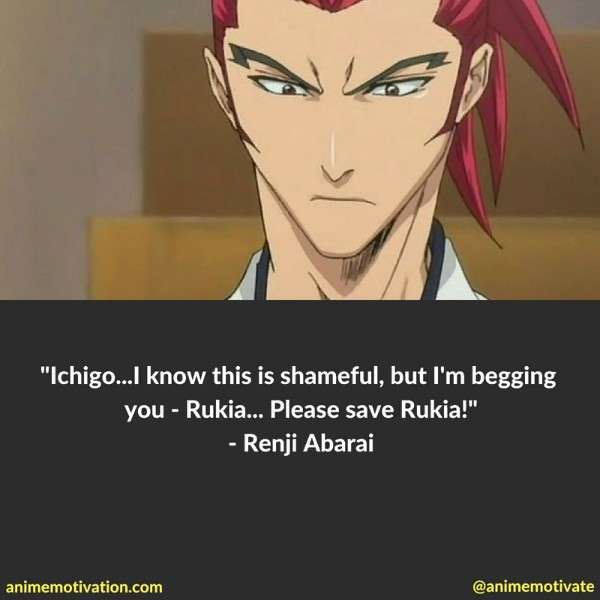 “Ichigo…I know this is shameful, but I’m begging you — Rukia…Please save Rukia!!” – Renji Abarai 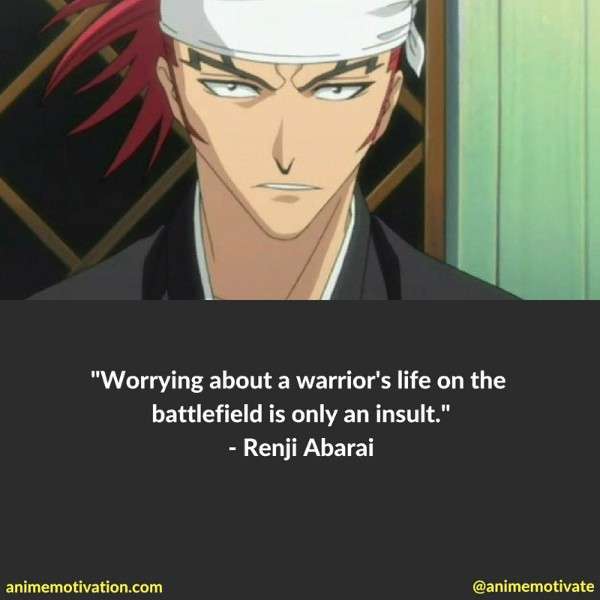 “Worrying about a warrior’s life on the battlefield is only an insult.” – Renji Abarai 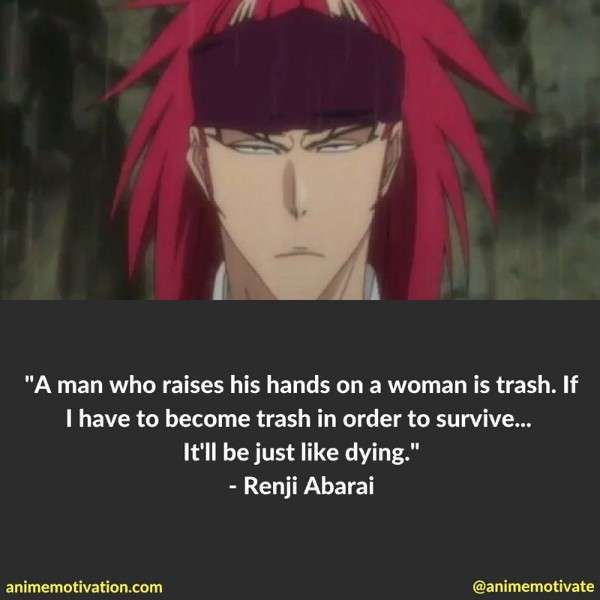 “A man who raises his hands on a woman is trash. If I have to become trash in order to survive… It’ll be just like dying.” – Renji Abarai 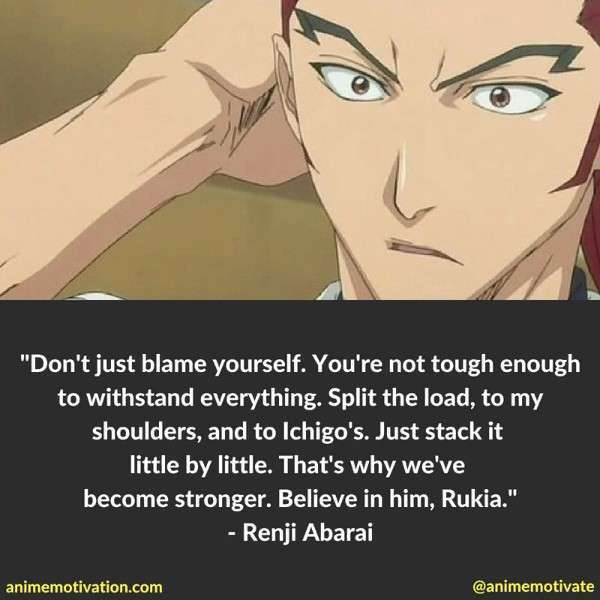 “Don’t just blame yourself. You’re not tough enough to withstand everything. Split the load, to my shoulders, and to Ichigo’s. Just stack it little by little. That’s why we’ve become stronger. Believe in him, Rukia.” – Renji Abarai 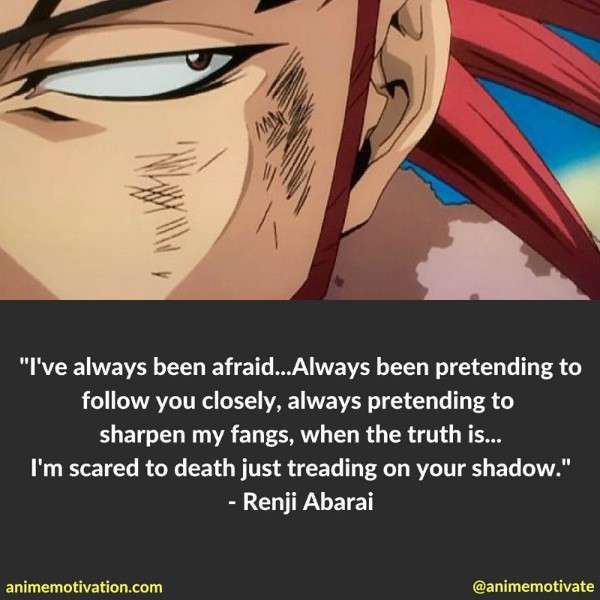 “I’ve always been afraid…Always been pretending to follow you closely, always pretending to sharpen my fangs, when the truth is…I’m scared to death just treading on your shadow.” – Renji Abarai

Why Itachi Uchiha Is Not A Hero, Regardless Of His Impact In Naruto