GUTS is a memorable, classic character from Berserk with a die hard fanbase behind him, and the franchise.

This is especially true for the manga and the classic anime series.

Guts has one of the strongest backstories with depth to his character, and understanding that causes him to have an impact on anime and manga fans.

This is expressed through his quotes, which share many facets of life, his experiences, and more. 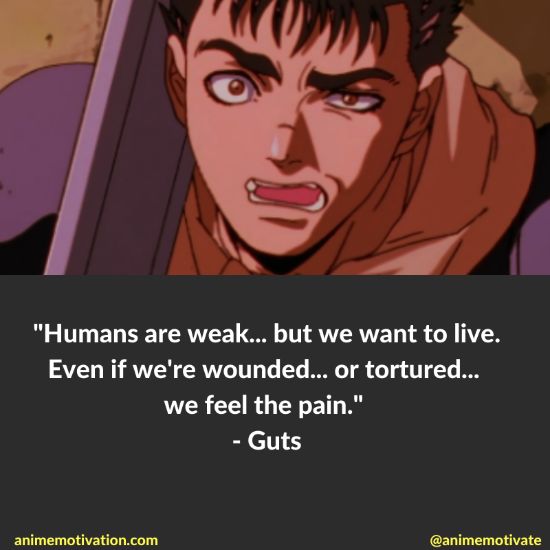 “Humans are weak… but we want to live. Even if we’re wounded… or tortured… we feel the pain.” – Guts 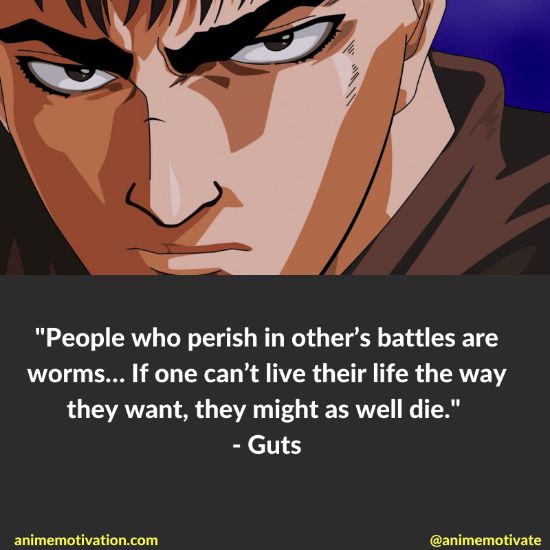 “People who perish in other’s battles are worms… If one can’t live their life the way they want, they might as well die.” – Guts 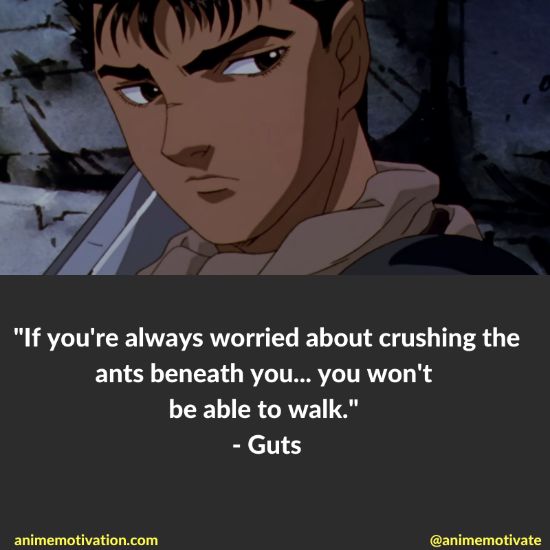 “If you’re always worried about crushing the ants beneath you… you won’t be able to walk.” – Guts 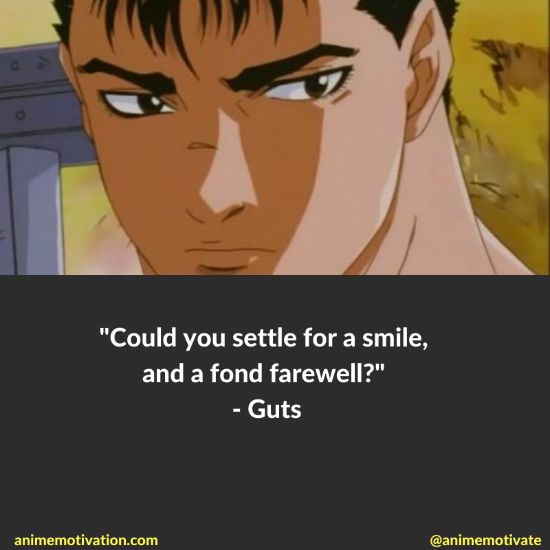 “Could you settle for a smile, and a fond farewell?” – Guts 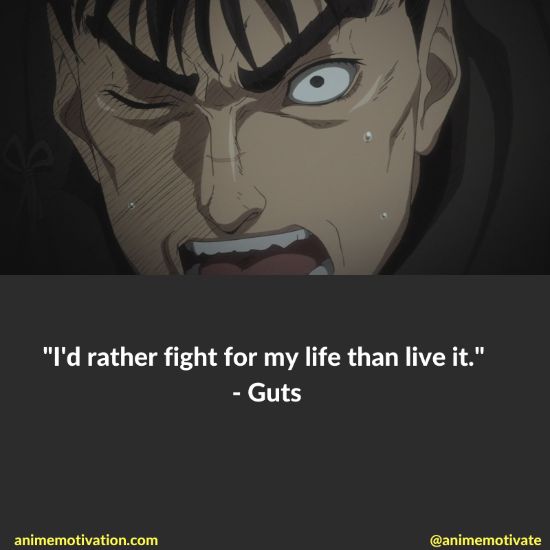 “I’d rather fight for my life than live it.” – Guts 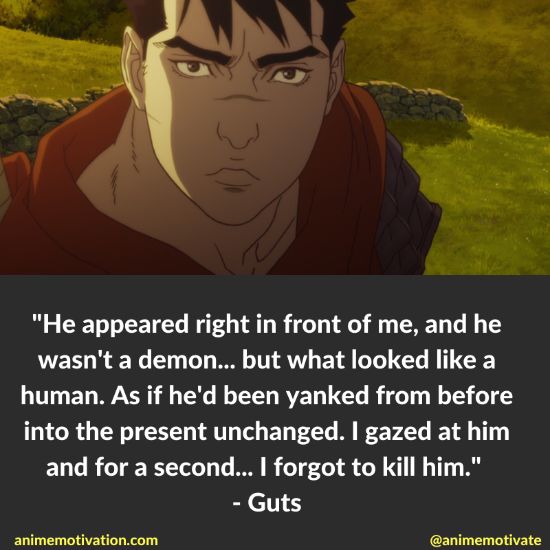 “He appeared right in front of me, and he wasn’t a demon… but what looked like a human. As if he’d been yanked from before into the present unchanged. I gazed at him and for a second… I forgot to kill him.” – Guts 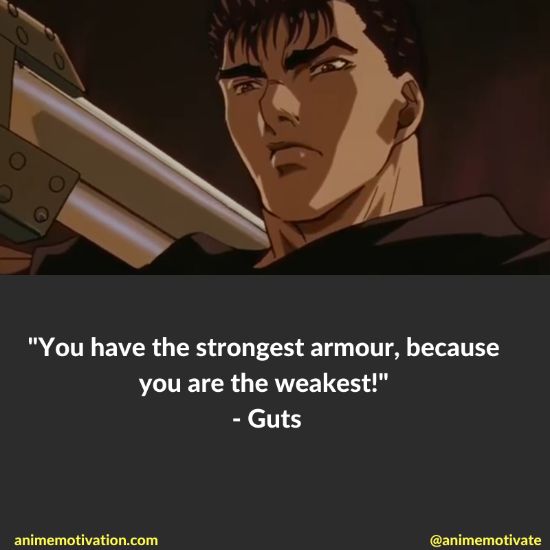 “You have the strongest armour, because you are the weakest!” – Guts 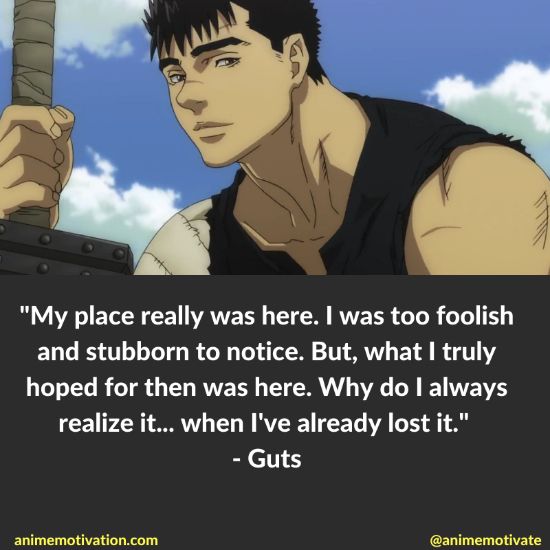 “My place really was here. I was too foolish and stubborn to notice. But, what I truly hoped for then was here. Why do I always realize it… when I’ve already lost it.” – Guts 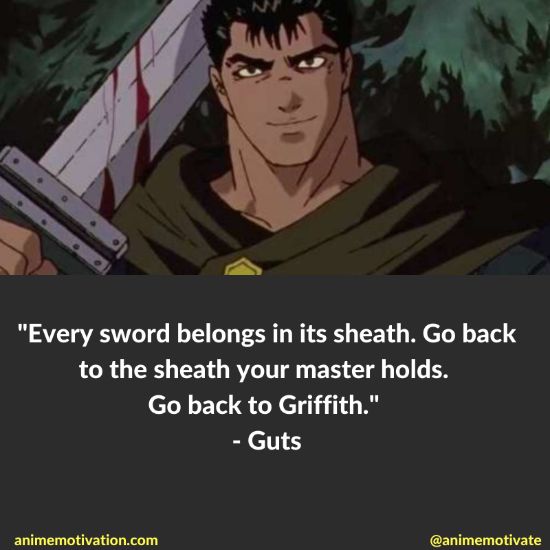 “Every sword belongs in its sheath. Go back to the sheath your master holds. Go back to Griffith.” – Guts 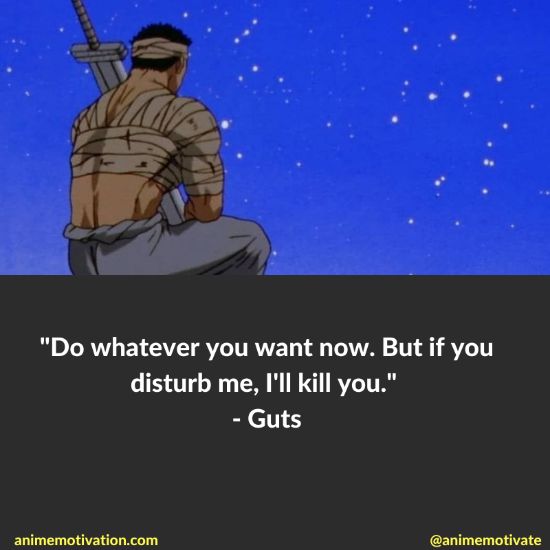 “Do whatever you want now. But if you disturb me, I’ll kill you.” – Guts 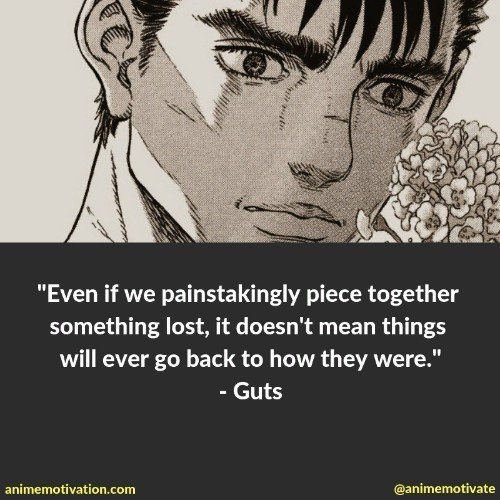 “Even if we painstakingly piece together something lost, it doesn’t mean things will ever go back to how they were.” – Guts 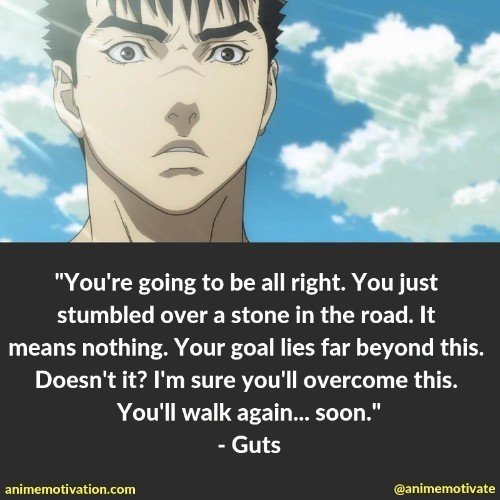 “You’re going to be all right. You just stumbled over a stone in the road. It means nothing. Your goal lies far beyond this. Doesn’t it? I’m sure you’ll overcome this. You’ll walk again… soon.” – Guts 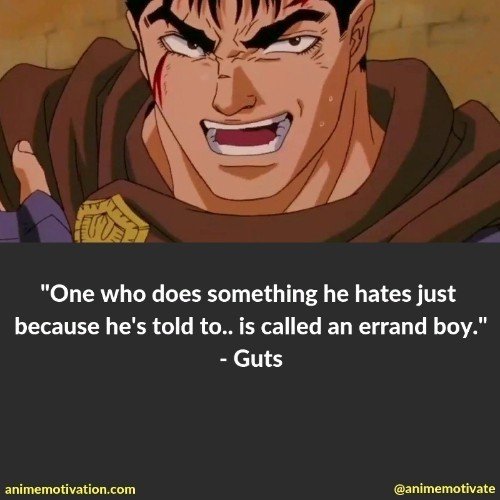 “One who does something he hates just because he’s told to.. is called an errand boy.” – Guts 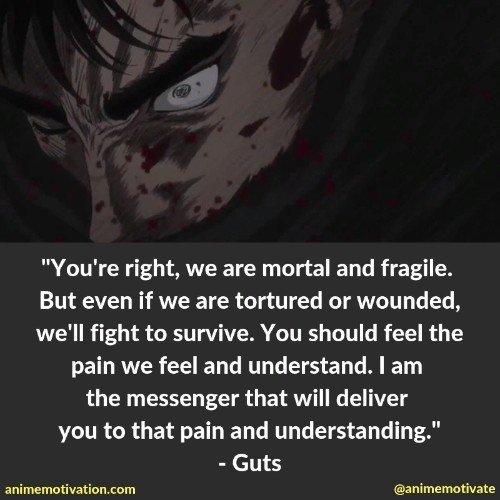 “You’re right, we are mortal and fragile. But even if we are tortured or wounded, we’ll fight to survive. You should feel the pain we feel and understand. I am the messenger that will deliver you to that pain and understanding.” – Guts 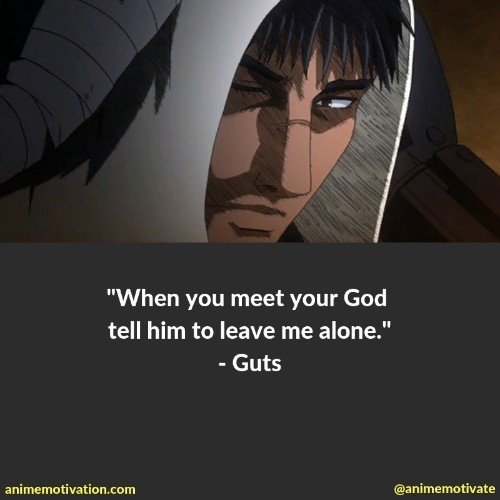 “When you meet your God tell him to leave me alone.” – Guts 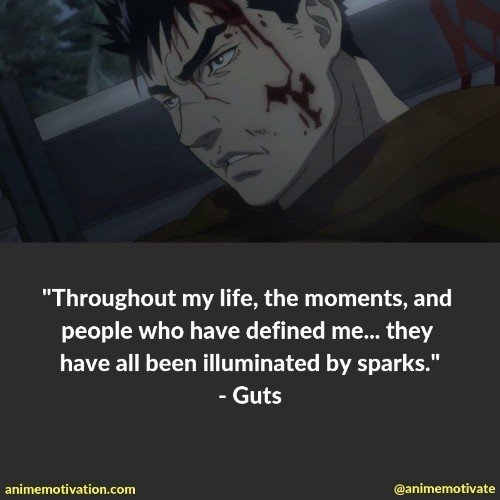 “Throughout my life, the moments, and people who have defined me… they have all been illuminated by sparks.” – Guts 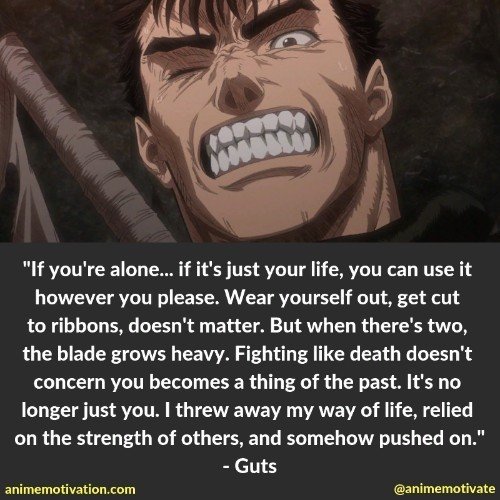 “If you’re alone… if it’s just your life, you can use it however you please/ Wear yourself out, get cut to ribbons, doesn’t matter. But when there’s two, the blade grows heavy. Fighting like death doesn’t concern you becomes a thing of the past. It’s no longer just you. I threw away my way of life, relied on the strength of others, and somehow pushed on.” – Guts 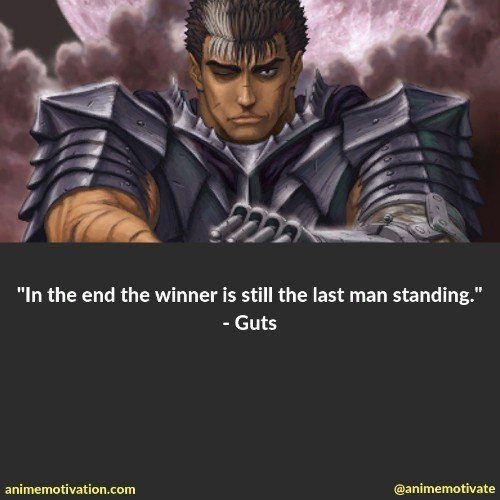 “In the end the winner is still the last man standing.” – Guts 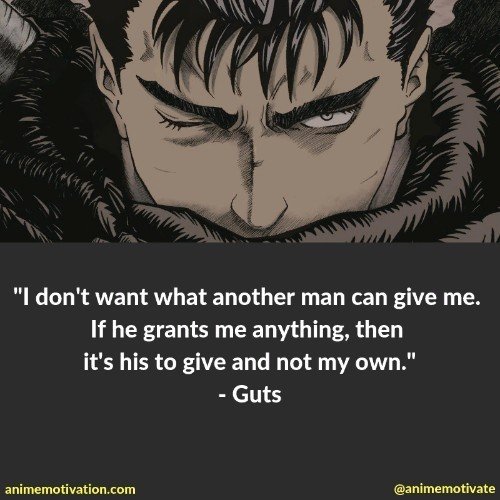 “I don’t want what another man can give me. If he grants me anything, then it’s his to give and not my own.” – Guts 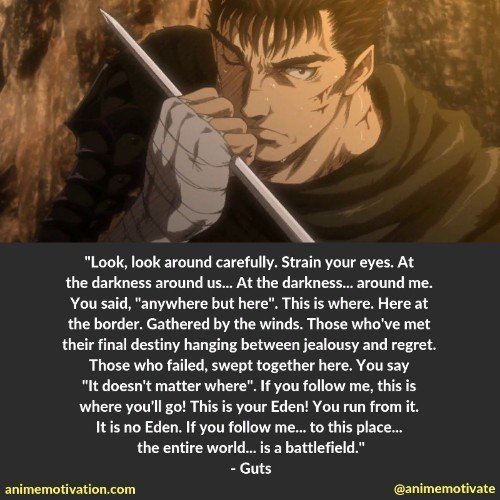 “Look, look around carefully. Strain your eyes. At the darkness around us… At the darkness… around me. You said, “anywhere but here”. This is where. Here at the border. Gathered by the winds. Those who’ve met their final destiny hanging between jealousy and regret. Those who failed, swept together here. You say “It doesn’t matter where”. If you follow me, this is where you’ll go! This is your Eden! You run from it. It is no Eden. If you follow me… to this place… the entire world… is a battlefield.” – Guts 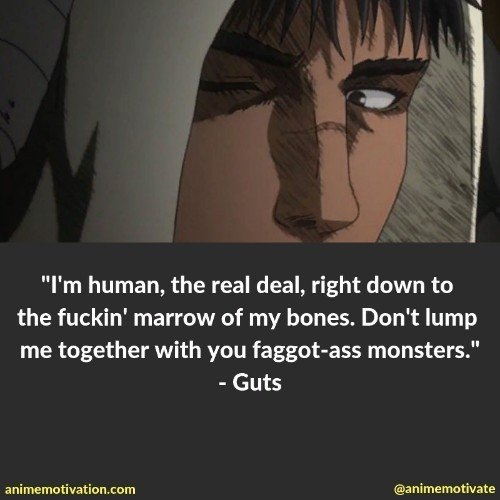 “‘I’m human, the real deal, right down to the f*ckin’ marrow of my bones. Don’t lump me together with you f*ggot-*ss monsters.” – Guts 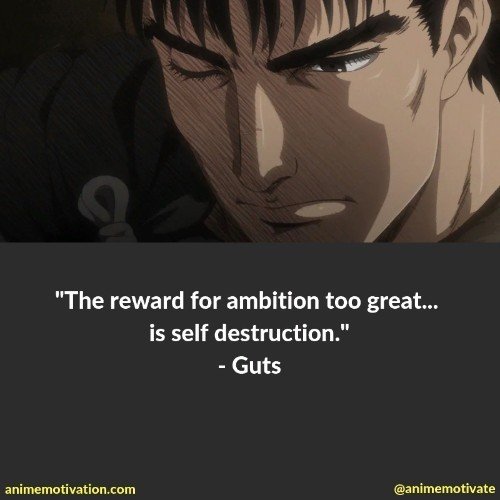 “The reward for ambition too great… is self destruction.” – Guts 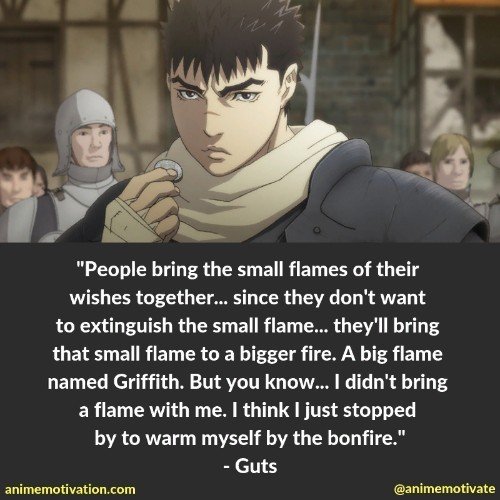 “People bring the small flames of their wishes together… since they don’t want to extinguish the small flame… they’ll bring that small flame to a bigger fire. A big flame named Griffith. But you know… I didn’t bring a flame with me. I think I just stopped by to warm myself by the bonfire.” – Guts

24+ Of The Greatest Kakashi Hatake Quotes for Naruto Fans

Berserk Deluxe Volume 2 Manga Start Shopping
We earn a commission from Amazon & other affiliates if you make a purchase at no additional cost to you.